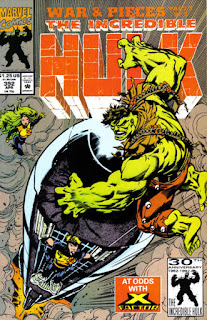 Plot
Havok has been captured by Farnoq Dahn, who plans to harness Havok's power to overcome his country's lack of nuclear arms. When CIA agent Galvin learns Dahn has drugged Val Cooper, he threatens to pull US support, but Dahn kills him. Meanwhile, the rest of X-Factor reach the front lines of Dahn's defenses just ahead of the Pantheon. Inside, Hulk, having followed the captured Havok into Dahn's palace, reveals himself. Outside, the rebel forces led by the Pantheon threaten to overwhelm X-Factor and Dahn's forces, prompting him to initiate his contingency plan: two dozen missile, each with a civilian strapped to it. He orders the rebels to stand down, then launches two missiles to show he means business. Hulk manages to save the small boy tied to one missile, while X-Factor rescues the boy's mother from the other. Hulk then tears through Dahn's defenses and captures the dictator, but when the Pantheon put him on trial before his people, most continue to support him. But Hulk insists they need to follow the will of the people, and doesn't allow the Pantheon to execute him. However, just then, Dahn is killed by Rick Jones, disguised as one of Dahn's soldiers. Wolfsbane approaches him in the aftermath, and he says he couldn't stand that after everything, Dahn was just laughing in the face of his people's continued support. He breaks down, saying he never thought he could do something like that, and Wolfsbane hugs him, telling him she knows the feeling.

Firsts and Other Notables
"War & Pieces" ends with Rick Jones killing Farnoq Dahn, and Wolfsbane silently comforting him (due to her experiences being driven to murder in X-Factor #76), though I have no idea if this is actually the first time the longtime supporting character has killed someone (it's clearly meant to be, but hey, Rick Jones has been around almost since the start of the Marvel Universe). 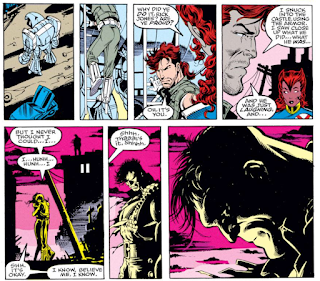 Hulk references "Operation: Galactic Storm", the linewide Avengers crossover unfolding at the same time as this story, saying it was a logistical nightmare. This is, I believe, a bit of commentary on Peter David's part, who opted not to be involved in the crossover since it would interrupt his plans for the series (and if there's one thing Peter David doesn't like, it's having to interrupt his plans for a book to participate in a sales-boosting crossover). As a result, though "Operation: Galactic Storm" at one point involves the assembling of everyone who's ever been an Avenger to respond to the crisis, Hulk is one of the notable absences, despite being a founding member and existing in a mental state at this time that would actually allow for him to reasonably participate in the story. 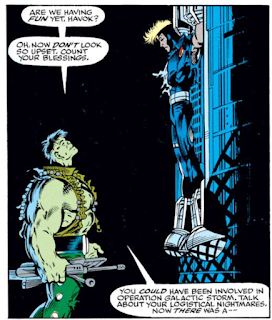 Val spends most of this issue the scantily-clad thrall of Farnoq Dahn, the result of a drugging that occurred in the previous issue. Other than to make Dahn an even more slimey villain, I'm not sure what it adds to the story (other than an obvious but pretty unnecessary bit of T&A). 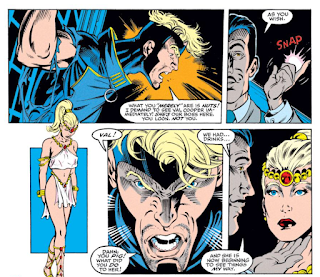 A Work in Progress
Strong Guy gets charged up with kinetic energy, and we get our first hint that he needs to dissipate that excess energy quickly. 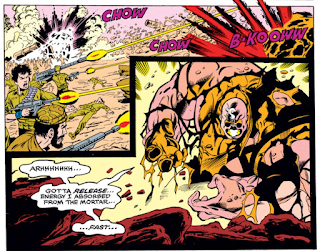 Austin's Analysis
The conclusion to "War and Pieces" continues the story's more or less ignorance of X-Factor #76. Any Hulk readers picking up this issue without reading X-Factor would have no problem following the story; even without reading X-Factor, this functionally pick up right after the conclusion of the previous Hulk issue. The only real callback to the events of X-Factor #76 comes at the end, as Rahne comforts Rick Jones after he kills Farnoq Dahn, the two characters silently bonding over how this war has driven them to kill. It's a nice moment, effectively rendered by all involved, but a relatively quiet and subtle one. The end result is less a crossover between the two books, and more a Hulk story in which X-Factor guest stars, along with an X-Factor issue set during the Hulk story that adds some context to the ending, but little else.

Which is all fine, ultimately. This is an entertaining story, and as much as it's a Hulk story, X-Factor acquits themselves well as antagonists-turned-guest-stars. It makes good use of their status as government operatives (one of the things that sets them apart from the other X-teams), and the dialogue in this issue between Hulk and Havok about the degree to which morality can be enforced from the top down and the limits of unilateral action, no matter how well-intentioned, to effect change, not only sets up, as I understand it, some important themes that the Hulk book will explore moving forward, but also shows off Havok's more pragmatic approach to superheroing/team leadership, something David will continue to explore with the character over in X-Factor. So even though the official tie-in to this crossover is ultimately superfluous, "War & Pieces" works as an effective showcase for the still-new, still-different X-Factor.