Unstacking the Deck: X-Men Series I 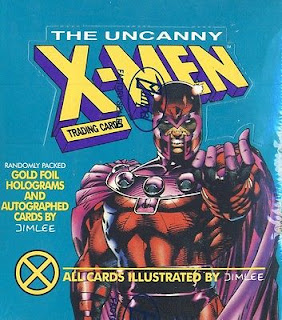 Firsts and Other Notables
After releasing two full sets of Marvel Universe cards (with a third following shortly behind this one), this is the first set of trading cards to exclusively feature Marvel's cash cow X-Men, with the added conceit that every card is drawn by Jim Lee, arguably the most popular of Marvel's artists at the time. Lee provides not only the central image on the front of the card, but the headshots on the back, as well five additional, original images for the hologram chase cards.

While this is the only official Lee-exclusive set of X-Men cards (an earlier set was released by a different company that featured reprints of images from comics he drew), this set does mark the beginning of an entire new sub-line of trading cards, with an X-Men-specific set released every year, alongside a full Marvel Universe set and (shortly) a Marvel Masterpieces set, for the duration of the trading card boom into the mid-90s.

Unlike the previous Marvel Universe sets, this series is only 100 cards, presumably because it's drawing on a smaller pool of characters. But really, the set is lean mostly because it jettisons card categories like Famous Battles, Arch-Enemies, Rookies, etc. It's pretty much just the characters and their teams, with former members and allies who aren't officially part of team rounding out the set.

The card backs feature real name, height, weight, group affiliation (with the Blue and Gold X-Men teams differentiated) and first appearance (with "Uncanny" used for all issues of the original series to differentiate it from Adjectiveless) next to a head shot of the character. Below that is a bar graph charting the characters relative attributes in Energy Projection, Mental Powers, Strength, Fighting Ability and Intelligence. Beneath that is biographical information and an "X-Tra Fact". Each card back is presented as being a "Cerebro Scan" of the character.

The hero cards are bordered principally in blue, the villain and team cards a reddish purple, and the Ex X-Men & Allies cards a light green.

The first ten cards of the set are all presented in landscape format, rather than portrait.

The final nine cards of the set (not counting the checklist card at the very end) feature an assortment of characters from all the teams save X-Factor training in the Danger Room, which form one large image when put together. 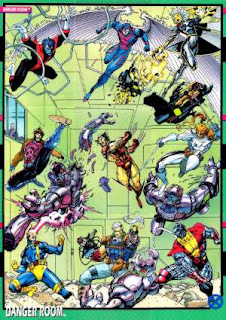 For characters who first appeared in Marvel UK series (like Psylocke & Meggan), the card backs specify their first American appearance.

Wolfsbane is described as having a crush on Havok; we'll eventually learn it's something far more than that.

Whomever wrote the biographical information apparently wasn't aware of Mr. Sinister's recent return in X-Factor, as his card questions whether he's truly gone for good following "Inferno". Also, the idea that Sinister is only harmed by Cyclops' optic blasts gets codified here via his X-tra Fact, though it has yet to be established definitively in the comics.

Other tibbits of note - Caliban is described as being able to generate fear in others (I don't remember that particular facet of his power being used before), while Toad is described as being deeply in love with Scarlet Witch (he certainly lusted after her in his early appearances, but it's been awhile since anything was done with that notion).

Of Their Time
Alan Davis' recent changes to Excalibur are well represented, with Kylun and Cerise both warranting their own cards, along with a Widget card featuring his new body (that he has yet to do anything with in contemporaneous issues of the series). Incidentally, Gatecrasher, Saturnyne, and Technet represent Excalibur on the villain side of things, and while the expanded roster of characters merit their own cards, the Excalibur team card features only the original five. 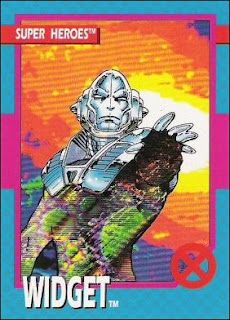 Maverick, fresh off his Lee-penned debut, gets his own card, as does Sabretooth in his new Lee-designed costume. 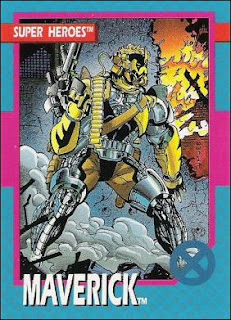 Mojo II, a character who has yet to make his first appearance in a comic book (it comes in X-Men Annual #1, and he then features in Lee's final X-Men story) gets his own card, as do the Brood, despite not appearing since the pre-"Inferno" Brood story, due to their role in Lee's next X-Men story (it also looks like Gambit is fighting them on his card). Shiva, at this point having only appeared in the one issue of Wolverine, gets its own card too. 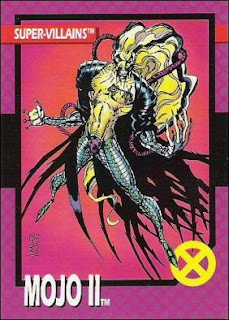 The Upstarts, of course, get their own card in the team section. Including amongst them is Sienna Blaze, who won't make her first comic book appearance until X-Men Unlimited #1 in 1993, well after Jim Lee has left the series, and Graydon Creed, who won't appear until the Sabretooth limited series that same year (Blaze is the woman on the card; presumably the guy next to her is Creed, though he looks nothing like his later appearances. Really, only Fitzroy and Cortez look like themselves, assuming the guy with an armored/cybernetic chest is supposed to be Shinobi Shaw). The X-Tra Fact on that card also cites "immortality" as the ultimate prize of the Upstarts contest. 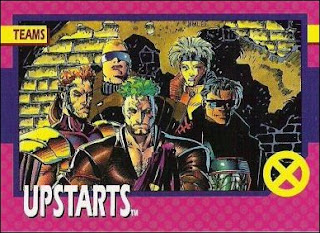 The new Brotherhood of Evil Mutants that debuted in X-Force gets its own card. Neither nor Masque nor Thorrn are pictured on it, but Thornn is listed as a member on the card back.

Despite being more or less obliterated by the Upstarts at this point, the Hellfire Club gets its own card, listing Shaw, Selene, Emma Frost & Magneto as members. Magneto & Frost get their own cards as well; Selene & Shaw do not (despite Selene showing up recently in Uncanny). 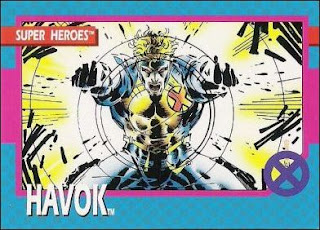 One of my favorite images of the character - Lee really captures the raw fury of his power. 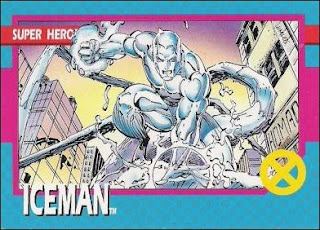 I've always liked Lee's Iceman, and appreciate that he adopted Portacio's "ring of ice around his hands" way of depicting his power in action. 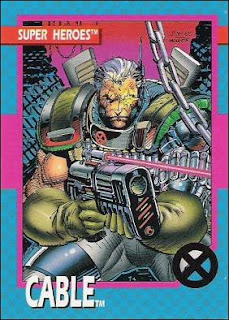 A rare for the time less-nonsensical look at a primary Liefeldian character. 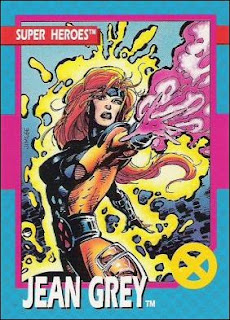 One of my favorite images of this character, as well. Not sure why. This card has always just entranced me. 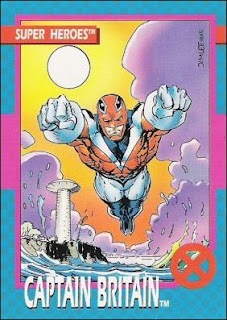 A classic hero shot of the character. 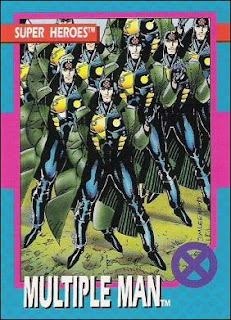 Nice depiction of his power. 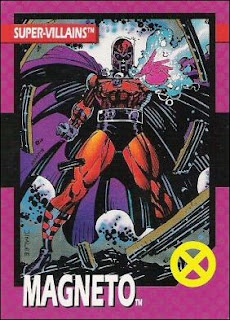 An iconic image for the X-Men's #1 baddie. 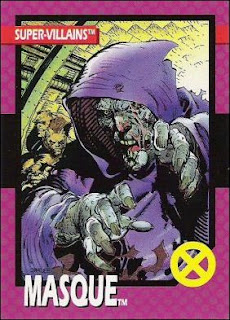 Captures the essence of the character by being suitably creepy. 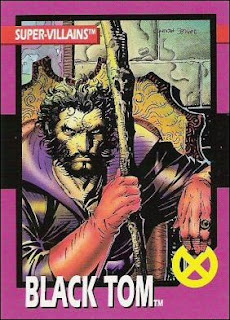 Not the most dynamics image, but I like the detail in his face, and the overall image gives him some gravitas. 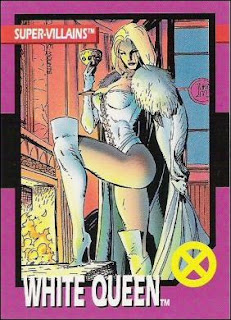 Partially responsible for kickstarting my adolescence. 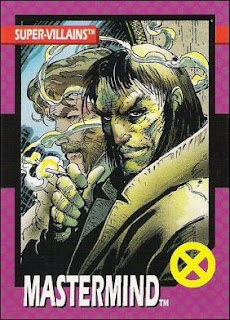 I like the way the card both displays his power, and references his most famous storyline. 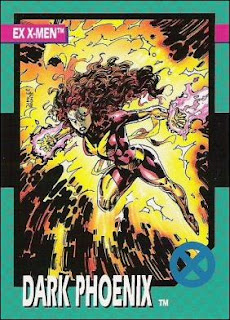 Like the Magneto card, just a really solid, iconic image for a character that loomed large over the franchise, even in 1992.

Austin's Analysis
This is the first set of comic book trading cards I bought at the same time I was reading comics (with Marvel Universe Series II transitioning me into comics, I acquired the first series after the fact via stores that still had stock of that series), and it remains probably my favorite of all the various Marvel trading card sets. Part of that is certainly due to the Jim Lee art - of all the future Image founders, he probably has the most raw talent, but he certainly also has his flaws as an artist. However, the static, pin-up-y images used on trading cards pretty much eliminate all those flaws, leaving a product that is simply Lee at his best (and for Marvel, a set of Jim Lee-drawn X-Men cards released in 1992 had to have been like printing money), forever immortalizing his versions of these characters.

But beyond the solid art, including some of my all-time favorite images of certain characters, I love this set just for being a snapshot of a very specific time in my collecting life, when most of these characters were still relatively new to me, their backstories (mentioned in brief on their cardbacks) still vast, unexplored stories for me to discover. This set represents my first encounter with several characters, specifically from the Excalibur side of the universe (heck, I still, as of this writing, haven't read a comic where Widget does something in his new body, but I've known about the character thanks to this set since 1992), as well as several of the villains.

This isn't an era of comics that is fondly remembered by many these days, but this set perfectly captures that brief post-relaunch, pre-Image Exodus Blue/Gold Era of the X-Men that was my introduction to comics, and every time I look at these cards, I'm immediately transported back to that time, of running out of Shinders, a thin brown paper bag containing a few comics and a couple-three packs of cards tucked under my arm, then climbing into the back seat of my mom's car and tearing into those packs in the back seat on the drive home, thumbing through card after card as the radio blared and the air conditioner battled the warm summer air.