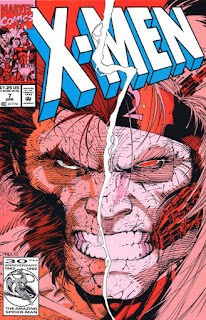 In a Nutshell
Wolverine & the X-Men escape from the Hand.


Plot
Though it runs the risk of killing Wolverine, Matsu'o orders Dr. Cornelius to continue probing Wolverine's memories to learn the whereabouts of the C-Synthesizer. Upon realizing he buried it with Janice, scientist who died during Wolverine's first encounter with Omega Red, Matsu'o orders Wolverine killed. Just then, Psylocke springs into action, Wolverine's near death having snapped her out of Matsu'o's control. As she fights Omega Red, elsewhere, Maverick frees the captive X-Men with the help of Sabretooth, who's been telepathically ensnared by Psylocke. But when Psylocke is knocked out by Matsu'o, the X-Men have to fight Sabretooth as well. Elsewhere, upon Psylocke's defeat, Wolverine breaks free and attacks Omega Red. He's quickly joined by Maverick and the rest of the X-Men, but when an explosion threatens the building, they're forced to evacuate to the Blackbird. On Mojoworld, Longshot's rebellion has failed, but Dazzler decides to bring some X-Men to the fight. On Earth, Matsu'o digs up Janice's coffin, but finds Wolverine waiting for him. He dispatches the Hand ninjas, but Matsu'o escapes again, and Wolverine turns the C-Synthesizer over to Maverick.

Firsts and Other Notables
In the end, Matsu'o escapes again, but Wolverine does cut off one of his hands, an act which factors in to Matsu'o's next appearance, in Wolverine. 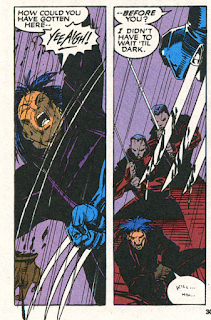 Dr. Cornelius, the scientist responsible for lacing Wolverine's bones with adamantium, dies this issue, killed by Maverick as he attempts to shoot Wolverine. I'm pretty sure he's stayed dead. 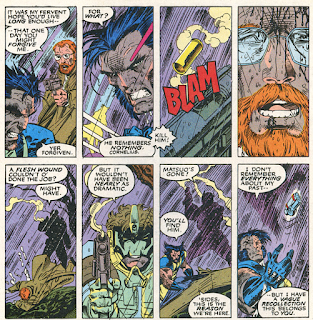 Maverick cryptically hints that if the X-Men knew the real reason he was in Berlin, they wouldn't be so happy with him. Maverick will next appear in a solo backup story in issue #10, but I don't believe this particular remark is ever clarified. 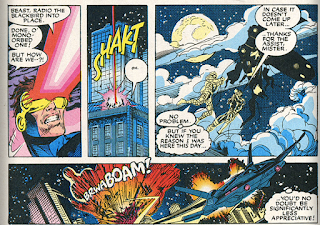 Between last issue and this one, Longshot's rebellion against Mojo has failed, with Longshot captured and Dazzler deciding to it's time to bring in the X-Men; this plotline will also be returned to in issue #10. 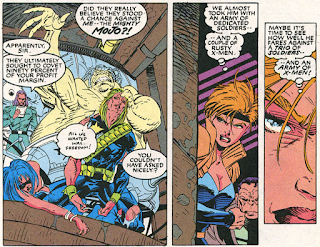 At the end of the issue, while still in Germany, Maverick passes along info to Wolverine regarding an old friend, with a footnote pointing to Marvel Comics Presents #101; that issue kicks off a Wolverine/Nightcrawler story set in Germany (Nightcrawler is the friend in question Maverick mentions). 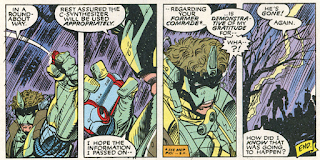 In a bit I've always chuckled at, Beast says he's as thankful to be rescued as the next blue-furred mutant, then adds as an aide, "which, I suppose, is Nightcrawler." Beast gets another good line later in the issue when he asks after Psylocke, their resident "psionic Japanese by way of Britain ninja warrior" which are hard to come by (that panel is also a fairly iconic Lee panel; Maverick aside, I think at least a few of the character images get used in licensed material). 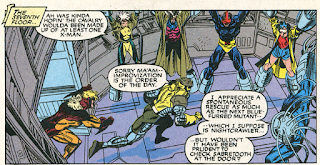 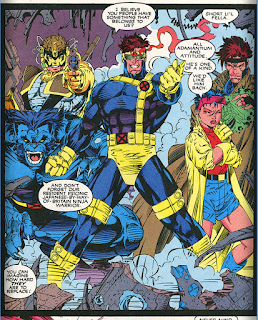 A Work in Progress
This issue confirms that Wolverine's memories of this 60s era Berlin mission that's unfolded over the course of this issue was supressed by the Weapon X project.

Carbonadium is said to be a cheaper, more malleable form of adamantium, which is why this little coalition of Upstarts wants it (and by extension, the C-Synthesizer, which creates it). It's also the thing that Omega Red's coils are made of, and which will, for some reason, allow him to live without draining other life forces.

In a Claremont-esque use of her power, Psylocke telepathically tricks Omega Red into thinking he's activated his death factor when in fact he hasn't. 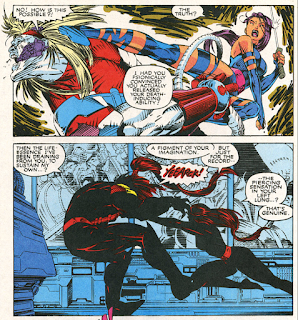 Despite being seemingly gutted by Sabretooth last issue, Gambit appears to be perfectly fine this issue.

Austin's Analysis
The "Omega Red"/"Jim Lee Draws Some Stuff About Wolverine's Past" story comes to a close. This is one I remember really liking as a kid - I re-read this story a lot, moreso than others (like the Mikhail story over in Uncanny) from this time. Now, I think it still mostly holds up. It's perhaps a bit too long at four issues, but the first chapter is mainly setup and more concerned with closing out the previous arc and doing some character work, while the subsequent chapters hand over some pages to the Mojoworld subplot, so it's not all the main story, all the time. And the issue-to-issue plotting is certainly...dubious at best, notably the mysterious canister from issue #5, which has to get explained away by dialogue in later chapters, and the shifting, unnecessarily-complicated MacGuffins.

But there's also a lot of energy to this story, enough to help carry it past the iffy plotting. Lee is clearly having a blast, and that comes across on the page. Wolverine's past at this point hadn't yet been strip-mined to death, so there's still some novelty to seeing it explored (and really, on the grand scale of Wolverine Past Explorations, this is fairly minor, simply showing one of his previously-mentioned missions as secret agent and working Sarbretooth into it, hardly a revelation either). Maverick, meant to be the kewl new character of this story, doesn't overwhelm the main cast (somewhat ironically, it helps that Maverick never really develops into that big a deal as a character, in the way Deadpool kinda sucks attention away from the main cast in his early X-Force appearances nowadays), and while Wolverine is clearly the star of this story, Lee leaves enough room for each of the rest of the X-Men to get at least a moment or two in the spotlight along the way.

It's a big silly jam story, featuring villains old and new, a lot of Wolverine, and a few fun twists. By no means is this on par with Claremont at his height, or really even the best of the more recent Claremont/Lee collaboration. But it's a pretty close facsimile thereof, with just enough competency in the plotting and scripting to not drag down the still-energetic and exciting artwork, which continues to carry the day.

Next Issue
Tomorrow, Necrom gets to work in Excalibur #49. Friday, more fun with Mojo in Wolverine #53. Next week, Bishop settles in, in Uncanny X-Men #288.