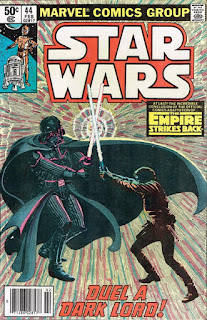 In a Nutshell
Luke learns Darth Vader is his father.

Plot
Lando announces that Han has survived the carbon freezing process. Pleased, Darth Vader gives Han to Boba Fett, and orders the chamber reset for Luke, then tells Lando he's leaving a garrison in the city, another alteration to their deal. Outside, Luke exchanges fire with Boba Fett and some Stormtroopers, before entering the chamber to face Vader. Lando then secretly communicates with his security forces, capturing the Stormtroopers escorting Leia & Chewbacca and promising to help them rescue Han. Elsewhere, Luke and Vader's duel takes them out onto a reactor gantry suspended over a large shaft. Leia and the others arrive too late to stop Boba Fett, but Lando says they can still make it to the Falcon. At the reactor core, Vader cuts off Luke's hand, after which he urges Luke to join him, saying together they can defeat the Emperor. When Luke refuses, Vader tells him the truth about his father: Vader is Luke's father. A disbelieving Luke lets go of the gantry, plummeting down the shaft, eventually landing perched on a weather vane on the underside of the city. As the Millennium Falcon prepares to flee Bespin, Luke reaches out to Leia in the Force, desperate for help. She turns the Falcon around, managing to catch Luke just as the vane gives way. As the Imperials close in, Artoo repairs the ship's hyperdrive, enabling them to escape to hyperspace. Later, they rendezvous with the Rebel fleet, and Luke receives a new cybernetic hand, then wishes Lando and Chewbacca well as they depart to rescue Han.

Firsts and Other Notables
Finally, after several teases and indirect confrontations, Luke and Darth Vader battle one another directly, lightsaber-to-lightsaber, for the first time this issue. 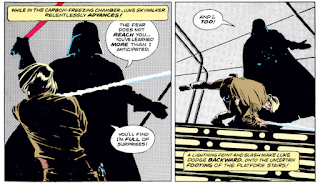 This in turn leads to the big shocking revelation Empire is known for, the reveal that Darth Vader didn't kill Luke's father, he is Luke's father. It's a revelation that immediately changes the nature of the story, and it's hard to tell whether it feels natural or not relative to the series' previous depiction of Darth Vader (in part because when reading that Vader, even doing my best to view the character as the writer and audience at the time would have, it was still hard not to think of him in this context). At any rate, it will be interesting to see how the series deals with this information, as it's the kind of thing the series could get a lot of mileage out of, yet will likely be firmly controlled by LucasFilm. 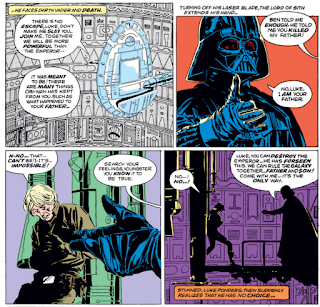 Prior to that, Luke loses his hand and lightsaber during the duel, and I'm curious how the series handles Luke not having a lightsaber as well. 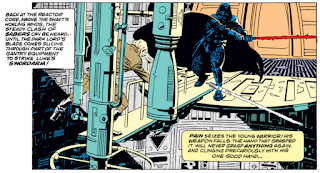 More pinups in this issue, including our first comic book look at the Ugnaughts and a piece by Fred Hembeck. 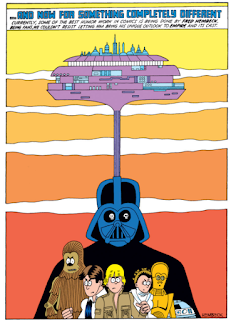 This is Archie Goodwin's last issue as editor of the book (a post he's held since issue #11), though he still has a few upcoming stories he wrote yet to be published. He says in an editorial on the letters page that he's stepping down due to increased responsibilities with Marvel's Epic Illustrated line, but I suspect he may also be a victim of Editor-in-Chief Jim Shooter's edict that editors can't write their own books (that is, a writer needs an editor who is not him or herself).

A Work in Progress
This issue confirms Han did indeed survive the carbon freezing process, though it will be quite some time before we see him again sans carbonite.

As in the movie, Lando and Chewie end this issue heading for Tatooine, which is another interesting pick-up point for the series, since there's a fair amount of time that needs to pass before Jedi begins and closes out this plot thread.

Um, Actually
When arguing with Lando over the changing nature of their deal, Vader gives Lando a little Force choke, something I don't recall happening in the movie. 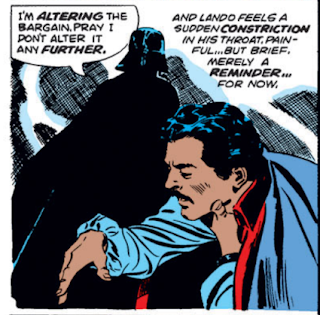 The duel between Luke and Vader unfolds a little differently than in the movie, with Luke's fall through the window after being pummeled by Vader leading directly to the catwalk/gantry where he loses his hand. 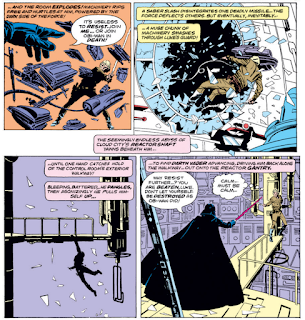 A little bit of added tension is added to Luke hanging off Cloud City, with the vane slowly loosening under his weight, culminating in Luke actually falling onto the Falcon, instead into Lando's waiting arms. 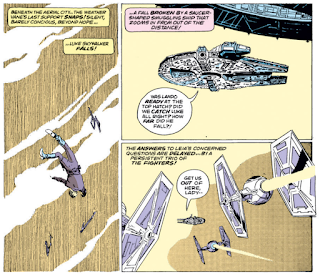 It's in the Mail
Speculation has already started as to the identity of the "other" referenced by Obi-Wan and Yoda as Luke left Dagobah, with a letter writer in this issue suggesting Lando.

Austin's Analysis
The Empire Strikes Back adaptation concludes here with minimal fuss, depicting events mostly as they unfolded on screen, with just a few minor variations (mostly due to the differences in medium). Overall, this film adaptation is much more successful, at least in terms of overall enjoyment, than the New Hope adaptation that kicked off the series, and that's mostly down to one thing I never talk about nearly as much as I should: the art. For one, the art throughout this story is much more consistent than with the previous adaptation, as Howard Chaykin was assisted by a seeming revolving door of inkers throughout that story, his style seemingly changing from issue to issue.

For another, the Williamson/Garzon art is just better. Not only in terms of photo-realism, enabling the characters to look more like the actors playing them, but also in terms of overall craft, the way Williamson & Garzon (and Wein and Veitch) lay out panels, use color and shadow to depict mood, and alter the level of character and background detail throughout the story. When this adaptation started, I bemoaned that Carmine Infantino was pushed aside just for the duration of this story, and while I still think the series as a whole would have been better served if its regular artist was allowed to draw its biggest story yet, there's no denying that this adaptation succeeds on the strength of Williamson & Garzon's art.

Next Issue
Look out, he's got his probe!