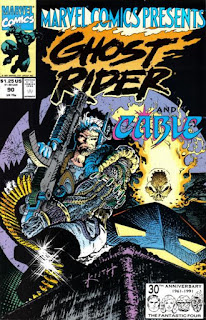 In a Nutshell
Ghost Rider & Cable team-up to save a young woman from a death cult.

Plot
Investigating the Morlock Tunnels, Cable rescues a woman being pursued by the Grateful Undead, which draws the attention of Ghost Rider. Together, the two battle the Undead and the apparent god who leads them for the life of the woman, until it's revealed that the woman is one of the Undead as well, and their god a human necromancer. Learning that his people have become assassins, he puts an end to the Grateful Undead, and allows the woman to choose her own fate. She decides to return to death, after which Cable and Ghost Rider go their separate ways.

Firsts and Other Notables
This story overlaps with both the Wolverine "Blood Hungry" and Beast "Just Friends" stories on the front end, and a Wolverine story drawn by Tim Truman on the back end, which we won't be covering (it doesn't really have much of an impact on Wolverine, and most of the details in it ultimately get retconned out).

This story was later collected into a squarebound oneshot.

Creator Central
Regular Ghost Rider and future X-Factor writer Howard Mackie pens this story, and it's drawn by Guang Yap, who filled in for Rob Liefeld on the New Mutants chapters of "X-Tinction Agenda" but whose work seems less Liefeldian (if still unremarkable) here.

The Chronology Corner
Cable appears here between issues #4 and #5 of X-Force, prior to the Brotherhood/Morlock team-up and attack on X-Force.

A Work in Progress
As the story opens, Cable is in the Morlock Tunnels, mentioning that Masque has the Morlocks whipped into a frenzy of late.

Confronted with representations of death, Cable says the only thing that scares him about it is the failure it represents: the death of his charges in X-Force. 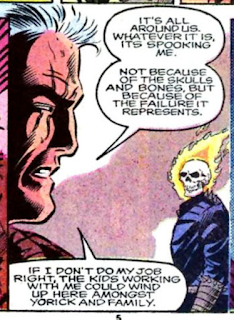 The Cable Guy
Emerging from water, Cable notes that he's thankfully avoided any short circuits in his bionic appendages. 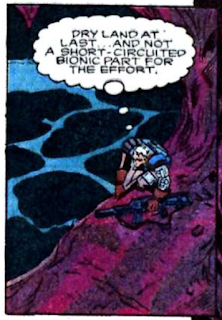 The Grim 'n' Gritty 90s
A Ghost Rider/Cable team-up is pretty much a 90s-only thing.

Austin's Analysis
This is one of the earliest solo outings for Cable ("solo" meaning "operating independent of X-Force, outside the X-universe), and while the character will soon receive his own solo series that will run for a surprisingly long time (and a few more series after that), this story highlights one of Cable's problems at this point in his development: everything that makes him interesting goes away when he's cutoff from the X-universe. Cable works best as a mirror for the rest of X-Force, either in reflecting the more extreme members like Shatterstar or Feral, or contrasting the more traditional characters like Cannonball and Boom-Boom who are more slowly coming to share his worldview, while the most intriguing thing about him - the question about any possible relation to other characters, notably Cyclops - goes away when he's lifted out of the X-universe. Left on his own, at this point in time, he's just a Wolverine/Punisher hybrid/clone.

Of course, that's really what audiences wanted in 1991, so I'm sure a Ghost Rider/Cable team-up was well-received back in the day, but this story certainly has problems outside of the Cable factor, notably the fact that it's almost laughably generic: the plot is generic (at best), the villain(s) is generic, the dialogue is generic, the art is generic, Ghost Rider and Cable say and do generic tough guy things throughout. There's almost nothing about this story that stands out and leaves an impression in any way, outside of the fact that it features Ghost Rider and Cable (and has some neat Sam Keith covers). Which, I guess, is pretty typical for Marvel Comics Presents as a series, the occasional "Weapon X" or "Blood Hungry" aside.

Next Issue
Next week: Bishop returns in Uncanny X-Men #287, X-Force is still fighting the Brotherhood of Evil Mutants in X-Force #9, and a not-at-all dead Cannonball makes an appearance in X-Factor #77.
Newer Post Older Post Home
Posted by Austin Gorton at 12:00 PM