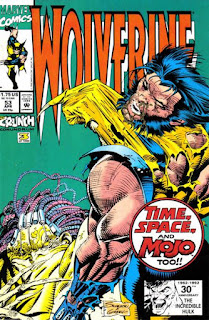 Plot
Wolverine, Mystique & Spiral attack Mojo, attempting to stop him from delaying the Crunch and thus ending all existence, but he sets his plasma wraiths on them and offers the captive Jubilee the opportunity to save Wolverine in exchange for becoming his slave. Suddenly, Gateway appears, and shows Wolverine that the solution lies with Albert & Elsie-Dee, along with a cruise missile. Figuring it out, Wolverine sends Mystique & Spiral to get the missile, while he stalls Mojo. As Wolverine battles more wraiths, Mojo reveals that he knows Jubilee will agree to his terms, since Abcissa is the Jubilee who said yes. In Canada, Spiral confirms the adamantium skeleton found by Albert & Elsie-Dee is from an alternate Wolverine, and agrees to send them back in time to unravel the mystery in exchange for a missile from their stealth bomber. Sending the missile through the vortex, Wolverine hops onto it and steers it towards Mojo. In his panic, he releases Jubilee, who jumps onto Wolverine's motorcycle and manages to grab Wolverine and race into the collapsing vortex just before the missile hits Mojo. Suddenly, Wolverine is in the midst of a poker game, and gets interrupted by a call from Jubilee; she needs Wolverine to come bail her out of jail in Tokyo.

Firsts and Other Notables
The issue ends with Jubilee having been deposited (along with Wolverine's motorcycle) in Japan, setting up next issue's story.

Wolverine, meanwhile, gets deposited at Four Freedoms Plaza, during one of the Thing's semi-famous poker games. 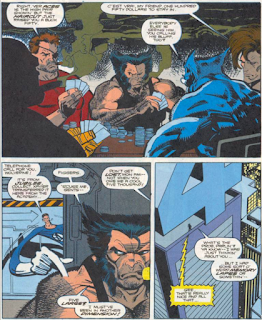 This issue confirms that Mojo's lackey Abcissa is Jubilee, from the timeline in which she agreed to serve as Mojo's slave in exchange for Wolverine's life.

It also established that the adamantium skeleton found by Albert and Elsie-Dee is Wolverine's, the remnant of the Wolverine from the timeline in which Abcissa was created. 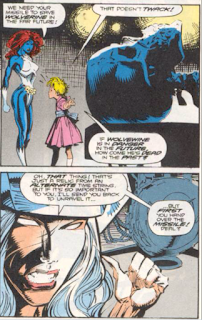 A Work in Progress
Gateway appears briefly in this issue, and helps Wolverine come up with the solution to defeat Mojo. 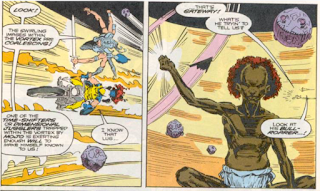 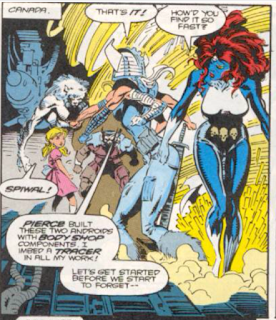 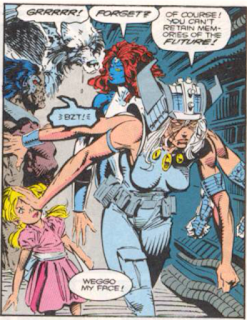 Austin's Analysis
What a weird, crazy story. I'm not even going to try to make sense of the time travel logic (mostly because I suspect it doesn't really hold up), because the far bigger issue with this story is the villain at the center of it. Mojo simply doesn't work as a world-stomping, cosmic-level Big Bad (heck, he barely works as a villainous parody of marketing forces), and certainly not as one whose goal is to bring about the end of all existence (to Hama's credit, he pays some lip service to the idea that Mojo is doing all this just to film it, and hints that he has a way to survive it, but it feels very tacked on). Mojo is a character tied to a very specific type of story, and while it's possible to make small steps away from that story type work, "trying to bring about the end of existence" is a pretty big step outside his comfort zone.

Hama still has a strong grasp of Wolverine's character, and that helps keep things centered amidst all the swirling craziness - even if everything else is little more than nonsense, Wolverine is consistent and reliable throughout -  and while "big and cosmic" doesn't necessarily play to Silvestri's strength (I'd almost rather have seen Andy Kubert on this chapter and Silvestri on the first one), he continues to do fine work here. Jubilee also has some effective moments in this issue. But Mystique is completely lost in the narrative at this point, almost literally just along for the ride, and Spiral has done such a 180 from how she was introduced in the first chapter that it seems like issue #51 was written by a different writer. And at the center of it all sits Mojo, horribly miscast as some kind of cosmic menace.