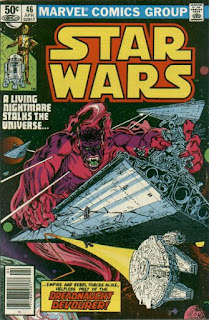 In a Nutshell
While searching for Han, Lando & Chewbacca discover a long-vanished hero from the early days of the Rebellion.

Plot
While searching for Boba Fett, Lando & Chewbacca, aboard the Millennium Falcon, are suddenly pulled out of hyperspace and discover a strange city floating in space. Landing, they soon encounter Cody Sunn-Childe, a Rebel hero who disappeared years ago. Meanwhile, an Imperial ship led by Captain Plikk detects the rent in dimensional fabric caused by the Falcon, and seeking glory for herself & crew, investigates. Meanwhile, Sunn-Childe tells Lando of how, in the midst of his war against the Empire, he nearly died but was saved by a group of beings who, in the process, granted him tremendous psychic power. The experience led him to eschew violence, and he created the floating interdimensional city for himself and his followers to live in peace. Later, the Imperials manage to penetrate the dimensional barrier and attack the city. When Lando & Chewie attempt to defend it, Sunn-Childe is moved to action, using his tremendous power to attack the Imperial ships. But at the last minute, he pulls back, ashamed of what's he done, and allows the Imperials to use the last of their energy to destroy himself and the city, but leaving the Imperials helpless in the process. Lando is shocked, and insists that lofty ideals alone just aren't enough when dealing with the Empire, but out of respect to Sunn-Childe, he leaves the Imperials stranded rather than destroy them, denying them their glory and leaving them to the fate they made for themselves. He then steers the Falcon back through the dimensional rift, and returns to the search for Han Solo.

Firsts and Other Notables
This story is credited to Wally Lombego, a pseudonym of veteran writer J.M. DeMatteis, who had his name removed from the credits after Lucasfilm requested changes be made to the story (in short, they felt that the pro-pacifism message of the story painted the heroes in a bad light, so a line from Lando basically saying "pacifism is all well and good, but the Empire is so evil it's wrong not to fight them" was added). 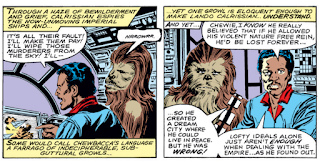 The issue begins with Lando and Chewbacca searching for Boba Fett and the carbonite-encased Han Solo. The idea that Luke and company don't know where Boba Fett and Han are at this point in time is one this series will run with, as it both opens up storytelling possibilities (like this issue, in which Lando & Chewie run afoul of something while searching) while also allowing the main characters to do something other than plan their assault on Jabba's palace that occurs in Jedi (which, of course, the series creators wouldn't know about yet).

The general idea is that while everyone knows Boba Fett is taking Han to Jabba, and that Jabba is on Tatooine, they don't know when Fett's going to show up there, or where he is in the meantime. And, with presumably other bounty hunters after Fett and his prize (something the later Shadows of the Empire story will pick up on), Fett is presumably laying low and not making a beeline for Tatooine since that's where his rivals expect him to be. So the narrative device o the Rebels trying to find Han, which makes life easier for the creators, makes some sense in-universe as well.

On the other hand, Luke specifically tells Lando he'll meet him on Tatooine, making it seem like that's where Lando & Chewie are heading to when they fly off at the end of Empire. Which puts the creators of a series intended to tell continuing adventures of these characters in a bind, so it's understandable that they fudge that apparent setup a bit, but it's still another example of the series dancing around some of the stickier continuity points the movie left for it.

This is the first appearance of Cody Sunn-Childe, an early fighter against the Empire who received nearly godlike powers and in the process pledged himself to pacifism. Though this is his only direct appearance to date, he does get mentioned in later reference material, and thus technically was part of the old Expanded Universe. 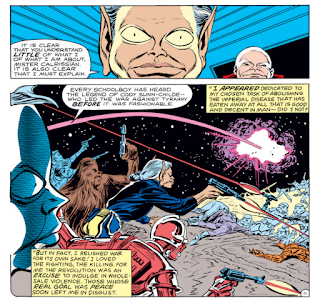 The antagonist of this story is Imperial Captain Plikk, notable for being the first female Imperial captain we've seen. 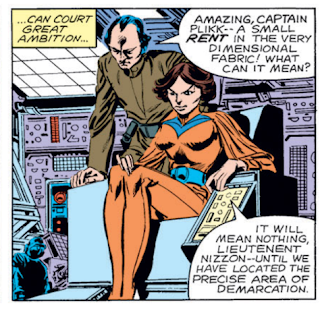 The Statement of Ownership in this issue lists the average number of copies of each issue sold over the previous twelve months to be 256, 605, with the issues closest to filing date selling 227,005 copies. As a point of comparison, the Statement of Ownership numbers from Uncanny X-Men in this same month (issue #144) are 192,514 and 205,736. While not yet the sales juggernaut it would eventually become, X-Men was still doing quite well for itself, and is only a couple years away from becoming a franchise with the launch of New Mutants, yet Star Wars is outselling it.

A Work in Progress
A narrative caption describes Lando as being new to the Rebel cause, and while it  makes sense in hindsight, having seen him leading the Rebels during the Battle of Endor in Jedi, it's actually something of a leap for the series at the time of publication, as there's no guarantee the roguish Lando would formally fall-in with the Rebels, even while he's dedicated to searching for Han.

Also, despite ending Empire in attire that made it look like he'd simply raided Han's closet aboard the Falcon, here he's back in an approximation of his blue ensemble, most likely (as with Luke getting stuck in his white pajamas for all those post-New Hope issues) because it was the look associated with his action figure at the time,

Um, Actually
Lando mentions that he was enamored with Sunn-Childe's battles against the Empire as a boy; later stories, both in the old Expanded Universe and the current canon, establish that open rebellion to the Empire didn't start until well after Lando reached adulthood.

Also, the later EU would establish that the Empire, one notable exception, who worked in secret, aside, didn't generally promote women to captain, the result of sexism within the Imperial military structure. The current canon is rolling that idea back a little, with at least one prominent female officer operating in the open during the height of the Empire.

The Space-Lexicon
Throughout this issue, "warp" is used synonymous with lightspeed and hyperspace. 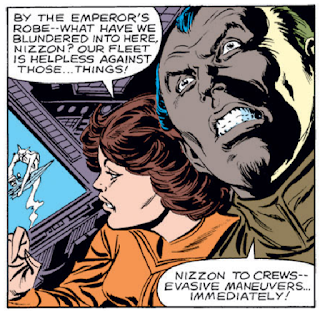 The Reference Section
Chewbacca, getting in on the ground floor of pop culture decades in advance. 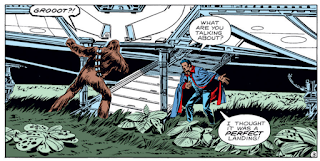 It's in the Mail
As opposed to earlier letters criticizing it, this issue features several writers praising "Riders in the Void" from issue #38, specifically requesting more art from the Golden/Austin team.

J.M. DeMatteis on removing his name from the story
"The message of the story was that there is as much nobility in laying down your arms - dying for a dream of peace - as there is raising your hands in violence. [Lucasfilm] said 'it makes our characters look bad to have other characters that won't fight, and to say that it's a noble thing not to fight.' That was incredible to me. I said, 'Forget it, I'm not putting my name on this.' I couldn't have my name on a story that I dedicated to my son (named Cody, not coincidentally) and was supposed to be about these very deep, passionate beliefs that I have."

Austin's Analysis
Putting aside this issue's merits (or lack thereof) relative to its status as an Empire Strikes Back followup (in that it uses the search for Han as a starting point and features Lando, but otherwise exists independent of anything from the film), it's actually not bad. While I can appreciate DeMatteis' ire over the changes wrought on his story, Lando's one face-saving (in the eyes of Lucasfilm) line of dialogue really doesn't take away from the message all that much, and the intended larger point still stands at the end despite it (for all of the concern on both sides, I take it more as an expression of Lando's perspective on pacifism, not the series as a whole). The arrival of Tom Palmer on inks, who helps reign in some of Infantino's more outlandish and overly stylized tendencies, also serves the story well, putting a touch of realism into it in contrast to Sunn-Childe's outlandish powers. As the first check-in on Lando & Chewbacca post-Empire, this is disappointing, but as a standalone story, it effectively uses the trappings of Star Wars to tell an entertaining story with a unique, thought-provoking idea at its core.