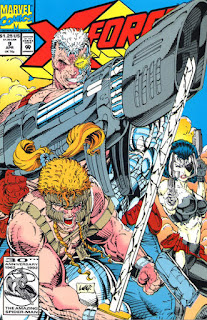 "Underground and Over the Top" / "X-Tenuating Circumstances"
April 1992

In a Nutshell
Masque & Sauron are killed as X-Force turns the tide against the Brotherhood.

Plot
Cable rushes Sam to the medlab, even though he's clearly dead. Once there, he urges Sam to wake up, saying he's a High Lord. Outside, Warpath, Shatterstar & Siryn fight Blob, which ends when Shatterstar slashes him in the mouth and Blob retreats. Inside, Feral attacks Sauron, who is shot by Cable shortly before Thornn attacks Cable, slashing his face and exposing metal beneath his skin. With the arrival of the rest of the team, Masque and Phantazia realize they're outnumbered, and Phantazia bugs out. Masque attempts a diplomatic retreat, but Cable reminds him that he warned Masque not to push his luck, and Shatterstar runs Masque through with his sword, killing him. Just then, Sam emerges from the medlab, wondering what the heck is going on.

2nd Story: Kane fights the Mutant Liberation Front. When they try to escape, he follows them through Zero's teleportation portal, emerging on the other side face-to-face with Stryfe.

Firsts and Other Notables
Our long nightmare is over: this is the final issue of the series drawn by Rob Liefeld. He'll continue to get plotting credit for a few more issues, but at this point, he's gone from Marvel, making X-Force the first X-book to lose its signature artist to the founding of Image Comics, and he won't be back until the ill-advised "Heroes Reborn".

Sauron and Masque are both killed this issue. Sauron will not wait long to come back, appearing in the new Brotherhood's next appearance in X-Factor #82, but Masque, who has been the chief leader of the Morlocks since after "Mutant Massacre", actually stays dead until he's inexplicably resurrected by Chris Claremont at the tail end of his X-Treme X-Men run in the 00s.

Thornn slashes Cable face this issue, exposing the metal beneath it (and revealing that his metallic parts extend beyond his arm and his eye), which is presented as some kind of big deal (it warrants a double-page sideways spread). This actually becomes a continuity point moving forward, as it will be several issues before Cable repairs his face, and thus has to appear with the metal exposed between now and then. 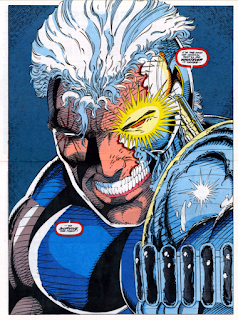 In the backup story, Kane comes face-to-face with Stryfe, and it's revealed that the pair have a history together (which will be detailed in the upcoming Cable limited series). 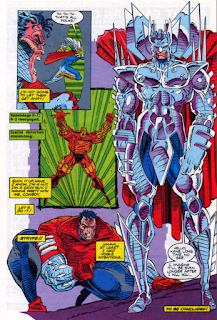 Creator Central
Mark Pacella, who will be one of Liefeld's replacement artists moving forward, draws the back-up story this issue, over Liefeld's plot and Nicieza's script (per the GCD). It's not very good.

A Work in Progress
Unsure of why Cannonball hasn't revived yet, Cable says that as a High Lord, dying is the start of living for him. He also outright says that Sam is the reason Cable is in this era, and that his status as a High Lord is why he's always had trouble controlling his powers (the former is eventually retconned out, while the latter is actually a nice use of continuity, given that Sam, of all the old New Mutants, always had the hardest time controlling and improving his power). 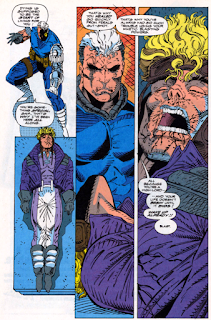 In the end though, Sam does revive, coming back to life after his death in issue #7.

501 Genes
The cover features a duo of Liefeld's greatest hits, the super enormous gun, and the gun with no handle.

When Shatterstar runs Masque through with his sword from behind, Liefeld forgets to draw the sword coming out of Masque's chest, something that stuck out to me even as a kid (when I was less sensitive to Liefeld's faults). 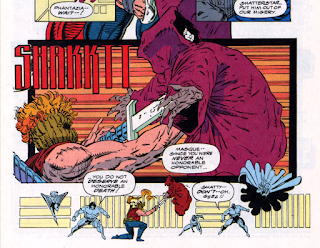 Word balloons seem to be misappropriated in this panel, with Shatterstar's line coming from, I believe, Warpath, despite Warpath denouncing Shatterstar's actions on the next page.

To the EXTREME!
Though Cable appeared to shoot Sauron to kill at the end of last issue, he's still alive as this issue opens. Then Cable shoots him again (in the back), and he does apparently die. 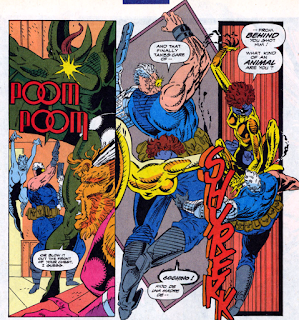 Shatterstar slashes Blob in the mouth with his sword, prompting Blob to admit he's used to fighting other teams that play by different rules shortly before he rabbits. 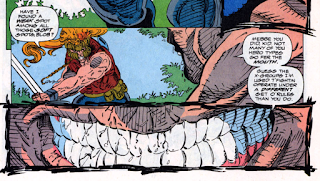 It's in the Mail
A letter in this issue asks where Feral's leg went in issue #5; the response jokingly suggests a transdimensional wormhole.

Austin's Analysis
We are inching ever closer to the end of this seemingly-neverending Brotherhood storyline (next issue and the following is mostly just wrap-up), with several key villains slain (and several more, like Toad and Pyro, completely absent from the issue) and Cannonball restored to life as X-Force turns the tide of the battle. But all of that is mostly overshadowed by the fact that this is the last issue of the series drawn by Rob Liefeld. Though he'll continue to receive plotting credit for the next few issues, his stopping drawing the series mid-story is about the most Liefeldian way to leave possible.

Yet, despite his relatively small amount of work on this series (nine total issues, one of which only contained framing art from him, several of which were padded out with extras like the Cable Guide), especially relative to all that followed in his wake, this series continues to be associated, in the pop culture zeitgeist, with Rob Liefeld. While he helped create the series from the ashes of New Mutants, the nine issues he both plotted and drew represent a mere blip in the history of the series, a series which has several different runs of legitimate high quality in its future. He never really succeeded in giving the series a sense of identity, beyond vague notions of the heroes being more proactive (which, more often than not, they weren't). His most lasting creations - Cable & Deadpool, and to a lesser extent Domino & Shatterstar, all debuted in New Mutants. X-Force instead gave us the likes of Kane and GW Bridge, and the upcoming, laughable and lamentable, X-Ternals.

So while most readers at the time likely bemoaned the loss of Liefeld to Image (I certainly did, back in the day), with the benefit of hindsight, his departure looks more like an emancipation for the series, allowing it to move forward in the hands of more competent creators, to develop something of an identity of its own beyond "whatever crazy crap Rob felt like drawing that day."