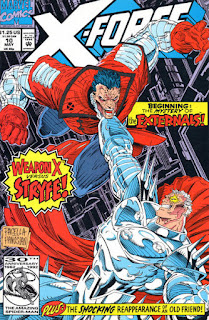 In a Nutshell
Cannonball learns he's an External, the Externals plot to capture him, and Rictor returns.

Plot
As Kane battles the MLF, Gideon meets with his fellow Externals, a group of immortal mutants, to discuss the recent awakening of Cannonball. He is lambasted for mistakenly believing Sunspot to be the next External, but promises to dispatch Crule to rectify the mistake. Meanwhile, Kane comes face-to-face with Stryfe and discovers he has the same face as Cable. At X-Force's headquarters, Cable orders Masque & Sauron to be taken to the morgue while he tells Cannonball about the Externals and his status as one of them. At the MLF headquarters, Stryfe toys with Kane before knocking him out. Waking up just outside Department K, Kane rushes in to see General Clarke. Believing Cable to be Stryfe, he tells him that Bridge was right, and that they should put the Weapon Prime program at his disposal. Clarke isn't sure Weapon Prime is ready, but he does introduce Kane to Rictor, who is also looking forward to bringing down Cable. Elsewhere, Mr. Tolliver dispatches Deadpool to pay Domino a house call, in order to remind her how much it displeases him when his employees ignore their job.

Firsts and Other Notables
After teasing the idea of Cannonball being an immortal mutant called an External in previous issues, this issue introduces a group of such mutants (who, according to Cable, are also known as High Lords, though they prefer External which, it should really be the other way around), newcomers Nicodemus, Saul and Absalom, while also revealing that Gideon is one as well (all four characters have Biblical names, which probably was supposed to mean something, but then there's also mention of Krule). Eventually, both Selene and Apocalypse will be revealed as Externals as well, though both status as such

And let's get this out of the way: a secret cabal of immortal mutants isn't a terrible idea in and of itself; calling them "Externals" in titles and on the cover, etc., is pretty dumb, but understandable given Marvel's desire to brand everything an X. Calling them Externals in the story itself, via the characters, is even dumber. Them calling themselves Externals, and that being their preferred name, simply makes no sense - the association of the letter "X" with mutants is just because of Xavier, a man whose life would be a blip on the radar of centuries old mutants. 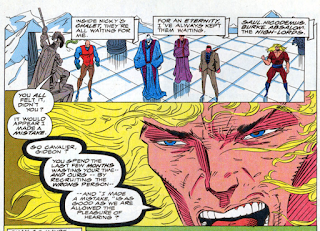 In revealing that Gideon is an External, this issue also establishes that he specifically lured Sunspot away from the New Mutants because he thought he was the External amongst Xavier's pupils. With Cannonball's ascension proving otherwise, Gideon's backup plan for Sunspot will shortly begin the process of reintegrating Sunspot into the main cast. 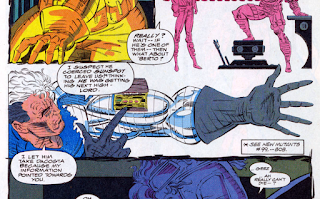 It's unclear if Liefeld always intended for this to be the rationale behind Sunspot leaving the team and going to hang out with Gideon, or if he (or Nicieza) later came up with this notion as the idea of the Externals was developed - Gideon certainly played an active role in luring Sunspot away from the New Mutants, which fits this revelation, but on the other hand, in his first appearance, Gideon was said to be a longtime friend of Sunspot's family, suggesting that he'd had to have been playing a far longer game to win Sunspot's allegiance than this issue seems to suggest he did. Certainly, evidence would suggest Liefeld wasn't plotting anything that far in advance, and it definitely felt at the time like he simply wanted Sunspot out of the book and used one of his new pet characters as the vehicle for it.

Gideon mentions dispatching Krule to capture Cannonball for the Externals; Krule will shortly appear, and enter into the early running for "Most 90s Character Ever".

Kane learns that Stryfe looks just like Cable this issue (and, of course, assumes Stryfe is Cable somehow, despite having in the past seen them both in the same place and time, a notion Stryfe doesn't refute); the Cable limited series will delve more into Kane's past dealings with both Cable and Stryfe. Also, the previous issue ended with Kane coming face to face with Stryfe after fighting his way through the MLF; this issue opens with him still fighting the MLF, then coming face to face with Stryfe again.

Fired up by his encounter with Stryfe, Kane returns to Department K and calls out for the formation of Weapon Prime; we'll see them appear next issue. In the meantime, Rictor, last seen running off to Genosha to rescue Wolfsbane in New Mutants #98, returns, beginning his reintegration into the series as well.

The issue ends with Mr. Tolliver dispatching Deadpool to check in on Domino, who hasn't made a report in awhile; this is setting up the chief conflict of the next issue, as well as the revelation that Domino isn't who she says she is. 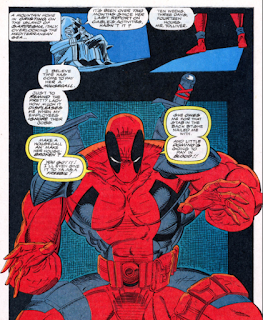 Though old news to readers, Cannonball learns he's an External this issue, and that is the reason Cable is in this time, working with X-Force. In a brief but welcome bit of characterization, Sam's biggest reaction to the news that he's functionally immortal is what he's going to tell his mom. 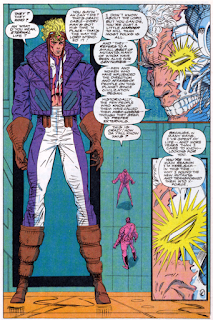 With Liefeld gone (aside from the cover and plot, both which presumably were completed in advance of his departure from Marvel), Mark Pacella and Dan Panosian take over on art, both of whom worked on previous issues in various capacities.  They will remain the series artists through issue #13, with another fill-in artist handling #14 before Greg Capullo comes aboard in #15.

A Work in Progress
Stryfe repeats the crystal ball that both he and Cable used at the end of New Mutants.

Pyro is once again absent from the issue, though Cable orders a contingent of X-Force to find them. Curiously, he also orders Sauron & Masque taken to the morgue for autopsies, despite it being pretty clear what killed them (bullets and Shatterstar's sword, respectively).

Cable says that Externals are immortal on one page, yet also that they can die, but are simply harder to kill than most, on another. So make of that what you will.

Boom-Boom mentions that she saw her mother die, but I believe that turns out to not be true.

The Grim 'n' Gritty 90s
Forearm jokes that he can't let Kane beat Stryfe because all their video rental cards are in his name.

501 Genes
The early pages of this issue are split (more or less horizontally) between the Externals and Kane's battle with the MLF, a technique that has worked in the past, but doesn't really work here (in part because the Image style of art doesn't really lend itself well to clearly divided panels on a page).

I'm pretty sure this panel of Cable is a swipe from X-Force #1, when he was using his power to levitate some tools.

In true Liefeld fashion, one in this issue are handed over to a big, utterly pointless, pin-up of Cable. 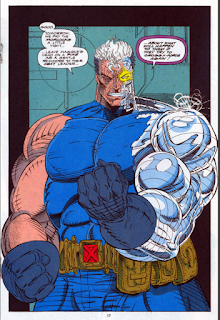 This issue features one of the worst pieces of art I've ever seen in a comic book. I have no idea how an editor looks at this picture of Cannonball and says "yes, that is a perfectly acceptable representation of a living human being and existing character consistent with dozens upon dozens of previous images. Like, how do Pacella and Panosian not get fired for trying to pass that off as professional art, let alone get paid for it and see it published in one of Marvel's top-selling series? 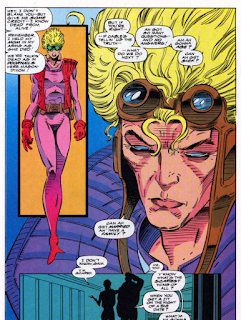 The Cable Guy
Cable does some repair work on his bionic arm, something that doesn't quite gel with the later techno-organic stuff. 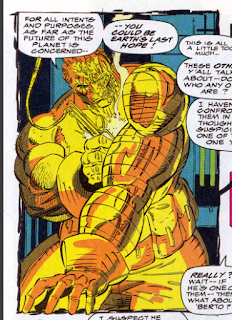 For Sale
Another ETM ad provides our first look at both Spawn, Todd McFarlane's principal Image title, and the existence of Valiant.

Austin's Analysis
Hooboy. If you thought Rob Liefeld's art was bad, here's this issue, to help redefine the definition of "bad art". Say what you will about Liefeld, the only thing worse than Liefeld art is bad impressions of Liefeld art, and that's what we're saddled with here, as Mark Pacella & Dan Panosian try to mimic the departed artist's style and somehow, despite the many, many flaws inherent to Liefeld's work, manage to turn out something even worse. For all those flaws, Liefeld's work had a certain energy to it, that either helped gloss over some of the problems, or at least made it fun to laugh at. This is just out-and-out bad, showcasing all of the flaws, with none of the (very few) positive attributes.

Between the art and the introduction of the Externals, one of the odder bits of X-lore, which reads like Liefeld was watching Highlander when he wasn't watching Terminator 2 (understandably so, granted) and which is, thankfully, mostly ignored these days, we are effectively at the nadir of the series at this point. The book will certainly have it's fair share of rough patches after this (some of the Loeb stuff, the overly-convoluted Shatterstar origin business, the Counter-X Pete Wisdom-led relaunch), but arguably nothing ever drops as low, in terms of combining both terrible art and bad story ideas, as the next handful of issues do.

Next Issue
Tomorrow, X-Factor battles the MLF in X-Factor #78. Next week, we look at X-Men Series I trading cards.