Season Six is the most ambitious season of the series since Season One; that much is hard to deny.  Ranking the season amongst the previous years is difficult, given that there’s so much to process, and it’s unlikely that any fan of the show wanted those two beloved, well-established characters to die.  Even if the execution is flawless, the producers are put in the position of doing something that no one really wants them to do.  And although this isn’t the show’s final season -- it’s not even David Milch’s final season -- you do get the sense that this entire year was written as a goodbye.

If I had to rank the seasons, based on quality, I’d place Season Six at around the middle.  It’s a noticeable improvement over Season Five, and it’s likely ahead of Season Four.  (Seasons One and Three remain my favorites, with Season Two floating around the middle, as well.)  There’s one caveat to this season, however -- Rick Schroeder just isn’t very good.

Untangling the Ungainly Mess that is Danny Sorenson
Jimmy Smits, loved by both fans and the crew of the show, wasn’t going to be replaced easily.  In Smits, Bochco and Milch found what would seem to be a rare entity -- a leading male TV star who was willing to play utility.  This might’ve been to Smits’ own detriment, given that Dennis Franz continued to receive award-winning material, while Smits’ character was often the guy reacting to other people’s dramas.  Bobby Simone was always there, a deeply compassionate man we discover, underneath his cool façade, but rarely the guy willing to open up about his problems.  If the show were truly told from Bobby’s point of view, it would’ve been about a cool-yet-caring detective going to work every day, where he literally sits in-between two alcoholics with severe psychological issues.  Regardless of how Bobby feels about it, their problems are going to be his.

Would another leading man accept a role like that?  I don’t know how if the producers felt as if they could find one, but ultimately, they went with an actor with a decent amount of name recognition, but not an abundance of star power.  The problem is, Rick Schroeder just seems out of his depth, and throughout his first season, it seems as if the audience and the cast members are having trouble adjusting to the new guy.

This is what we know about Danny Sorenson, newly transferred from Narcotics, as revealed during his first season…
Now, what does this all add up to?  Maybe a straight-laced cop who isn’t as straight-laced as he seems?  A damaged young man unwilling, or unable, to trust anyone?  A young Sipowicz in the making?  Maybe, but selling this character requires an actor with an impressive emotional range.  But in the words of Medavoy and Martinez… “He's no Bobby Simone.”

Jimmy Smits also played a guarded new guy, someone not willing to let another person in until he’s proven himself.  He never came across as utterly monotone, however.  Even in one of the numerous scenes that barely gave him a line of dialogue, Jimmy Smits always had stage presence.  Rick Schroeder, unfortunately, is just kind of there for much of this year.  Characters keep referencing Danny's temper, but Schroeder’s flat delivery simply doesn’t convey the idea that Danny is some tortured, angry young man.  And whenever his character is given a spotlight episode, like when he befriends a uniform cop who may not be up to the job, you rarely feel like you’re watching a leading man.  David Caruso would’ve killed this material -- many times when I hear Schroeder’s dialogue, I’m reminded of the lines Milch gave Caruso in the first year.  While David Caruso’s John Kelly always felt like a real cop to me, Schroeder’s line deliveries just don’t feel natural.  Maybe Danny Sorenson, mixed up guy that he is, could’ve been a compelling addition to the cast, but he’s portrayed by an actor who seems wholly uncomfortable in the role.  And I’m sure, on some level, this was an intentional choice, but the result is a character who rarely connects. 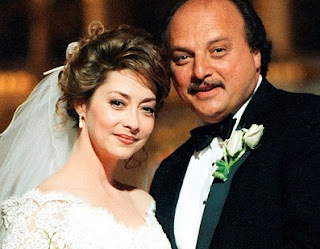 The Sylvia Issue
After teasing for years, this is Sharon Lawrence’s honest-to-goodness final appearance on the series.  I don’t want to see her go, but it’s clear that the producers aren’t offering her material she’s interested in, and the writers can’t credibly keep ignoring the issue of Sipowicz’s disappearing wife.  So, what ultimately happens to Sylvia Costas isn’t that great a surprise, if you think about it.

Looking back, I think the series missed a major opportunity to give Sharon Lawrence’s character some weighty material, and to ramp up the drama, back in the closing of Season Three.  Why did Sylvia forgive Sipowicz so quickly after his relapse?  It provided a graceful ending to that specific storyline, admittedly, but I think Sipowicz got off the hook too easily.  Why not have Season Three end with Sipowicz getting sober, but Sylvia refusing to trust him again?  Why not at least tease a divorce during Season Four?  That’d be a dramatic season premiere -- we find out Sylvia kicked Andy out over the summer!  It would’ve given both Sharon Lawrence and Dennis Franz some great material to play with, and thrown the audience for a loop.

And if Sharon Lawrence remained adamant about only appearing a few times a year…wouldn’t it make sense to recast her as the ex-wife?  Given Sipowicz’s behavior at the end of Season Three (and what we know he’s capable of), could anyone truly blame her for leaving him?

As for Sharon Lawrence’s belief that becoming a mom made Sylvia dead-weight in the writers’ eyes…why did the baby have to affect Sylvia’s career in any way?  (Daycare centers do exist for a reason.)  She could’ve returned to work at the start of Season Four, and since we’re speaking hypothetically anyway, the stories could’ve gone back to dealing with the larger legal issues that surround police work.  Why did we so rarely see Sylvia interact with the other detectives in the squad?  How does she deal with the perpetually anxious Greg Medavoy on the witness stand? 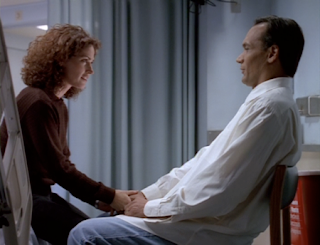 Season Highlights
Director Paris Barclay has said that David Milch wanted the opening episodes this year to capture what it’s like when someone you love is in the hospital, and you know they’re not going to make it.  The dread that comes with every phone call, the guilt of wanting them to fight even though they need to just let go…I’ve never seen a television show that captures that feeling so perfectly.  And rarely does the show feel like it’s giving in to cheap sentiment; it just feels like someone you know is dying.

Jimmy Smits, who’s always owned this role, delivers his strongest performance as he makes his exit.  Some of the greatest moments from this run include Bobby’s mental conversations with his childhood mentor, who assures him that he’s going to be reunited with his parents and the baby he lost with Diane, intercut with the feeble Bobby languishing on his hospital bed, increasingly unable to communicate verbally.

Bobby knows he isn’t going to live, but he doesn’t want Diane to think that he simply gave up on her.  Diane’s struggle to, as their young doctor puts it, “be humble” and accept that she’s going to have to let go, is also powerful.  Sipowicz is around, but rarely in the hospital scenes, struggling to deal with his grief while working on the job and making everyone around him miserable.  Some of these scenes are overplayed, but I admire the way Sipowicz isn’t shoehorned into Bobby and Diane’s final moments together.  Sipowicz sees Bobby in the hospital probably as often as a cop in real life would visit his partner during the day.

I’ll also note that the cases this year seem more engaging than the previous season’s, and there aren’t nearly as many formulaic plots this time around.  Quite a few of the cases this year have genuine surprises, and poignant moments with the suspects that you wouldn’t expect.  We also have far fewer B-plots that are clearly inserted as comedic relief.  It’s a season about the characters, and there isn’t nearly as much time for screwing around. 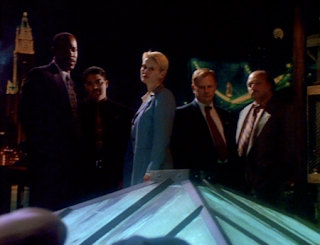 Season Lowlights
Not all of Bobby’s hospital dream sequences work.  The actor playing his mentor Patsy is downright cartoonish at times, which might’ve been a deliberate choice (since these are dreams), but Patsy’s delivery can be distracting.  The audience is also expected to believe that on his deathbed, Bobby’s going to have visions of his coworkers posing like the X-Men on his childhood rooftop.  I think Bobby’s had one scene apiece with Martinez and Medavoy over the past four years -- is he really going to spend his final moments on this mortal plane thinking about those guys?

I’ll mention again that I’m ambivalent towards all of the weepy displays of emotion we see this year.  I’m not advocating for the characters to be robots, but I’ve always appreciated just how honest this series is about how men, especially men of a certain generation, deal with their emotions.  The response, usually, is not to cry, especially if anyone else is around.  John Kelly thinking about his father while speaking to his ex-wife’s tenants meeting, then stopping himself and discreetly wiping away the lone tear, speaks just as loudly as the histrionics we experience this year.

Ironically, the Season Six finale goes starkly against the direction established earlier this year, by presenting Sipowicz as so horrified at the prospect of losing Sylvia that he cuts himself off from all emotion.  The puzzled reaction of his coworkers -- who aren’t sure if Sipowicz is back to drinking, or possibly even contemplating suicide -- to the anesthetized Sipowicz is perhaps my favorite part of the finale.  The eventual denouement, such as it is, is touching in its own way, but it cannot rival Dennis Franz’s performance during the closing of Season Three…when he faced the other greatest loss of his life.

Sipowicz Says
“So, that’s what fourteen-year-olds are wearing now?” - Sipowicz’s initial reaction to his new, much younger, partner.

What Was The Point of THAT?
David Milch’s tendency to run with plots, even though there’s no apparent conclusion in mind, is surprisingly absent this year.  In some cases, I think it’s obvious that the story’s being constructed from week-to-week (Delores’ arc, certainly), but there seem to be genuine payoffs this season.  I will say that the story of Delores’ father doesn’t have a real conclusion, and we don’t get to see Sylvia’s father or her priest (two characters who always popped up in the important Sylvia stories), but those aren’t dropped subplots as much as they are missed opportunities.

The most annoying recycling of an actor occurs this year when Michael David Lally appears as the leader of an AA meeting Andy and Katie attend.  Lally previously played Walter Hoyt, the sensitive painter who was willing to testify against a mobster’s goon, in two separate episodes over the course of two seasons.  This is irritating because the Walter Hoyt character had a noticeable amount of screen time in both episodes, and it was established that he had something of a bond with Sipowicz.  I didn’t notice many of these recyclings when I first watched the series, but this one always stood out.  (My first thought upon seeing him was, “Oh, now Walter the Sensitive Painter’s a friggin’ drunk, too?”)