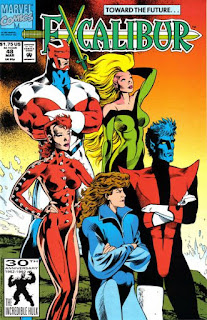 In a Nutshell
Excalibur meets Feron and releases the Anti-Phoenix.

Plot
In Ireland, Feron prepares for the coming storm as Excalibur rendezvous with Kitty. Explaining the mystery of the underground chamber and the failed attempts to reach it, Nightcrawler has Kitty & Rachel phase inside it while Meggan, Captain Britain &Cerise create a tunnel. Inside the chamber, Rachel is confronted with visions of her past, with someone in each setting urging her to relinquish the Phoenix Force for good. Just as the chamber is breached by Captain Britain and Feron arrives on the scene, the Anti-Phoenix bursts forth. Feron and Excalibur try to stop it, but it ultimately escapes, and Feron warns that if it joins with its creator, it may become unstoppable. Returning to the lighthouse to use the equipment there to track the Anti-Phoenix, Excalibur discovers Widget has created a new body for itself, while at the same time, the Anti-Phoenix meets its creator: Necrom. He absorbs the force from its host, prompting Rachel to declare they're too late: she can feel Necrom in her mind, and he's coming for her.

Firsts and Other Notables
This is the first appearance of Feron, Alan Davis' latest effort to inject some new characters into the series. He is the latest in a familial line intended to serve as the host for the Phoenix Force, though it's unclear here exactly how that's supposed to work since the Phoenix Force has chosen two non-Feron hosts that readers know of already. 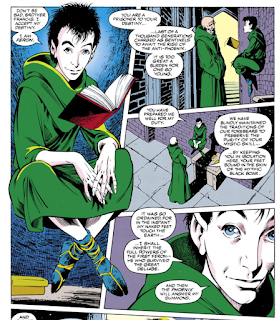 In addition to Feron, this issue also introduces the Anti-Phoenix, which is exactly what it sounds like, and turns out to be the entity Kitty discovered in the enclosed underground chamber last issue. It escapes and seeks out Necrom, its creator, who overpowers its current host and merges with it. 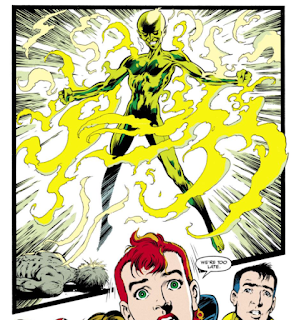 Both Kylun and Cerise travel with the rest of Excalibur to Ireland and help battle the Anti-Phoenix. I'm not sure if they're official members of the team at this point (whatever that means for a group like this), but they sure look like team members at this point. 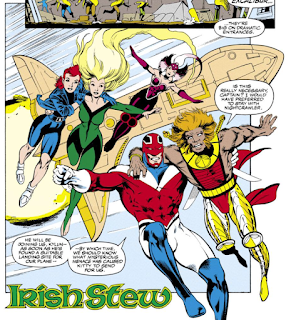 Kylun's mutant power is also established: he can perfectly recreate any sound he hears. Why this also turned him into a catman is unclear/unstated. 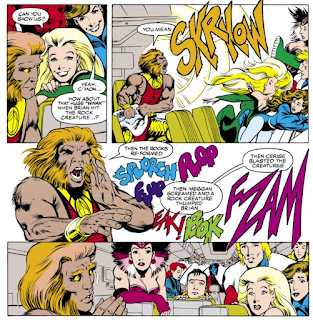 Widget acquires a new look, after experimenting with body creation last issue, in which his round head/googly eye is replaced by a more angular head and shoulders along with some kind of energy based body with silver finger tips. 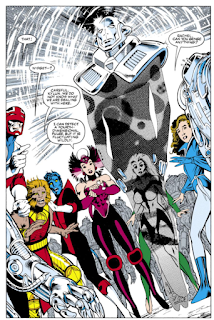 Exacalibur is flying a new plane on loan from WHO, as Professor X stole back their Blackbird in Uncanny X-Men #278. 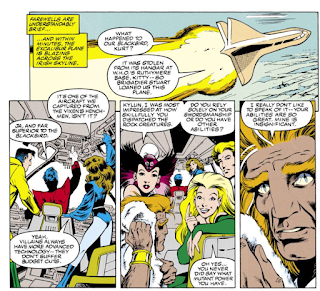 A Work in Progress
Rachel notes that her spiky red jumpsuit has no zippers, requiring her to use the Phoenix Force to take it on and off. 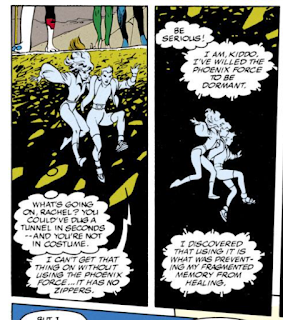 Nightcrawler continues to take up the reins of leadership and run with it.

In attempting to convince Rachel to give up the Phoenix Force, the Anti-Phoenix recreates the events of Uncanny #207, in which Rachel attempted to slay Selene and Wolverine stopped her by stabbing her with his claws. She says that now she knows Wolverine was right to do so, though I still maintain that savagely gutting her maybe wasn't the best way for him to make his point. 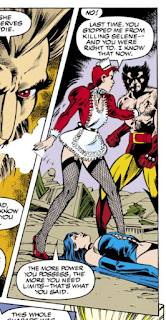 Austin's Analysis
Even though this picks up more or less immediately after the last issue left off, it still reads like Alan Davis getting down to brass tacks in terms of the story he wants to write, the one he's been slowly building towards since his return. Kylun and Cerise are effectively (if not officially) members of the team at this point, Widget finally gets a body and a new look, the original five are finally reunited after issues apart, a bunch of extraneous stuff (like Technet) has been cleared out and some questionable plotlines (like Possession) cleaned up, and the various plot threads involving Necrom and Phoenix and the origins of Excalibur are coming together (plus, Davis even gives himself a chance to draw some "greatest hits" moments from X-Men history to boot, through the anti-Phoenix' attempted seduction of Rachel). It's a pretty remarkable achievement, making this feel like both the start of a new storyline and the culmination of several, but Davis pulls it off.