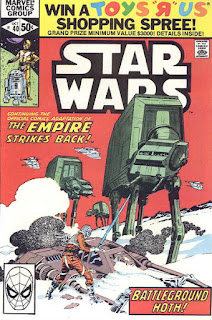 In a Nutshell
The Battle of Hoth begins.

Plot
With the Rebel base on high alert, a recovering Luke tries to tell Leia how he feels about her before thanking Han for saving his life. Meanwhile, Darth Vader executes Admiral Ozzel for emerging from hyperspace too close to the planet, alerting the Rebels of their imminent attack. On Hoth, Leia briefs the Rebels on their escape plan as Han and Chewie scramble to get the Falcon ready to fly. Luke bids them goodbye, then climbs into his Snowspeeder to help the defense of the base against the Imperial forces and their massive walkers. With their armor shielded against the vehicles' blasters, the Rebels are forced to use tow cables to bring down the Imperial walkers, but Luke is shot down as he moves into position for another attack, his ship crashing right into the path of an oncoming walker.

Firsts and Other Notables
Mentioned last issue, both Admiral Ozzel and General Veers appear for the first time in this issue, though the former is quickly slain by Vader for coming out of hyperspace too close to Hoth, thus alerting the Rebels to their arrival, after which Captain Piett is promoted to Admiral in his place. 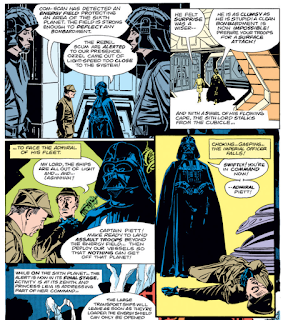 Also appearing in this issue is Toryn Farr, the woman manning the com station at Echo Base as the first transports evacuate the base. She represents the only other woman besides Leia to appear in Empire, and is one of only four women (including Leia) with dialogue in the entire original trilogy (unless you count Oola's grunts and shrieks of terror in Return of the Jedi as dialogue, in which case she's one of five). 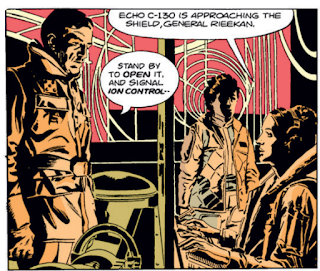 This issue gives us our first look at the Imperial All-Terrain Armored Transports aka AT-ATs or, more commonly, walkers, the massive, elephantine ground attack craft of the Empire.

As with the previous issue, this opens with a scene-setting splash page before the principle action begins. 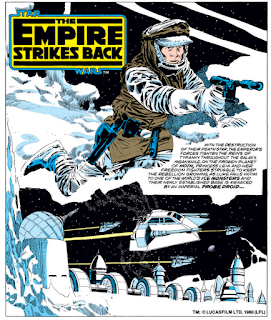 Another cover marred by an ugly yellow banner along the top, this one extolling the readers' chances of winning a Toys "R" Us shopping spree.

Creator Central
Rick Veitch (whose brother Tom later wrote the Dark Empire and Tales of the Jedi series for Dark Horse in the early 90s) wrote about his experience lettering (and doing some background art) for this story, as well as working with Al Williamson, which can be found here.

A Work in Progress
When Luke bids goodbye to Han in this issue, it represents the last time the two characters will directly interact with one another until the events of Return of the Jedi. 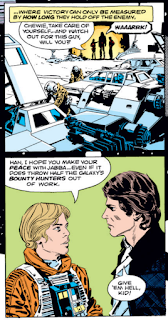 Um, Actually
This issue establishes that the Rebels have herded a group of wampas (called just "ice creatures" in the issue) into a sealed room in the base. 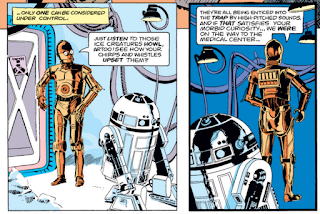 The aftermath of Luke's wampa attack shows him receiving some kind of facial bandage to help heal the cut on his face, while the dialogue between him and Leia before Han and Chewie enter the room is different than in the film (it mostly matches the deleted scene from the Blu-ray). 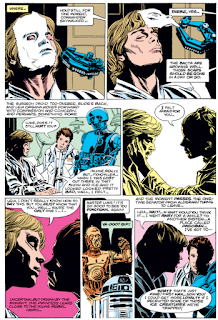 The ion cannon blast depicted here is physically more disruptive than in the film; ion cannons are meant to disable a ship's shields and electronic systems, not hit with any physical force (they're basically like directed EMP blasts). 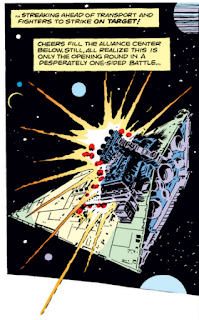 Unlike in the film, a Rebel scout aboard a tauntaun makes first contact with the Imperial walkers. 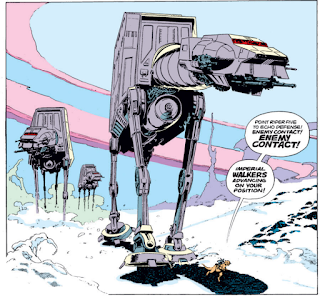 Artistic Achievement
There's a really swell full page splash of an Imperial Walker. Like, "I'd like to hang that on my wall" good. 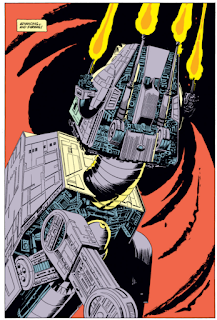 You Kiss Your Sister With That Mouth?
The most significant (since it appeared in a movie) Luke/Leia kiss appears in this issue, as she plants one on Luke, ostensibly to make Han jealous. 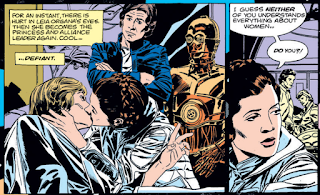 It's in the Mail
A letter in this issue praises the creative team for finally getting Luke out of his Tatooine whites. The response attempts to sell the idea that he remained in that attire as a way of blending in (which seems suspect since no one else on any other world was ever wearing anything close to it), while also admitting it had much to do with presenting an image of Luke each month that was most likely to be familiar to anyone picking up an issue for the first time (whether that was a LucasFilm edict or something Marvel decided on their own isn't said).

Austin's Analysis
In reviewing the series' initial adaptation of the first film, I wrote about the way it broke up the narrative to suit the "end each chapter on a cliffhanger" approach of comic book storytelling, an easier task given the film's roots in old timey movie serials. This issue of the Empire adaptation is another interesting case study. Having only read this story in collected format (without noting where each individual issue would have ended and the next began) I don't recall exactly where in the story each issue breaks. Given the cover and pacing of the narrative, I'd assumed this issue would cover the entirety of the Battle of the Hoth, ending right around the time the Millennium Falcon blasts away from Vader, effectively ending the first act.

Of course, that's not the most compelling of endings for an issue - the heroes escaping safely - so instead Goodwin & company spread the Battle of Hoth across two issues, taking a break just as Luke's snowspeeder crashes and is threatened by an oncoming walker. It's a relatively minor moment of suspense in the film (the tension builds nicely as Luke tries to get the unconscious Dak out of the vehicle before the walker crushes it, but I doubt anyone was genuinely fearing for Luke's life that early in the movie), but is the perfect kind of thing on which to end a comic book issue, leaving the reader a month to speculate (theoretically, at least; most readers had probably seen the movie by now) not whether Luke would survive, but how, while allowing the opening of the next issue to begin with a heroic triumph.

Next Issue
Out of the frying pan, into the fire on Hoth.