Firsts and Other Notables
Released by Toy Biz, the first line of X-Men figures is an offshoot of the company's initial release of Marvel Universe figures, and before long, the growing popularity of the X-Men (helped in no small part by the animated series, for which this becomes the de facto toy line of that TV show) leads this series of figures to far eclipse and outlast the initial Marvel Universe line that spawned it.

Toy Biz, of course, has a complicated history with Marvel. Following its initial licensing deal with Marvel, the company signed an "exclusive, perpetual, royalty-free license" agreement with Marvel in exchange for a percentage of Toy Biz's overall equity, a move which brought Ike Perlmutter and Avi Arad, co-owners of Toy Biz, into Marvel's overall corporate leadership structure, allowing them to, essentially, win control over Marvel in the wake of the company's bankruptcy in 1996 (thus it could be said that Marvel eventually came to be owned by the toy company to which it once issued licenses to create action figures of its characters, but in the wake of the restructuring, Toy Biz was merged with Marvel in the new Marvel Enterprises company, with Toy Biz as a subsidary). Avi Arad went on to spearhead, as a producer, nearly all of Marvel's live action & animated TV series and films during his tenure with the company (he resigned in 2006; I believe the Ed Norton Hulk film is the last Marvel Studios film to credit him as a producer). Perlmutter, a controversial figure within the industry, remains with the company today, having become CEO of Marvel Entertainment in 2005, though he recently stopped his involvement with the Marvel Studios films, with studio head Kevin Feige now reporting directly to Disney, in part due to Feige's frustrations with some of Perlmutter's less savory actions and beliefs.

All of that, because once upon a time, Marvel hired Toy Biz to make action figures for them (and then, you know, went bankrupt).

The first series of figures, though all labeled as X-Men, actually feature both Cyclops and Archangel in their X-Factor costumes (Cyclops specifically in his Simonson blue-and-whites), with Apocalypse, at the time considered much more of an X-Factor-specific villain than an overall X-Men one, rounding out the villains alongside Magneto and Juggernaut.

The second series of X-Men figures were released in two waves, which sometimes get broken up into Series II and Series III; for the sake of simplicity, I am grouping the various series by year as much as possible (which some reference sites do as well).

The second series included an unproduced Havok figure (in his pre-X-Factor black costume), which I believe eventually got released as a Wizard exclusive.

The X-Force figures came packaged similar to the second series of X-Men figures, albeit with "X-Force" emblazoned over the X-Men logo on the card.

Cable's figure is based (fairly accurately) on his appearance in X-Force #1 (not surprising, given how many eyeballs saw that issue), and as a result, I think that look is somewhat more iconic than many of his other varied looks.

Special thanks to MarvelToys.net for the images.

Of Their Time
As was common for action figures at the time, many figures, especially from the first wave, came equipped with some kind of action feature: Cyclops & Storm had light up elements (Cyclops' visor and her chest lightning bolt), Magneto's arms and legs were magnetic, Nightcrawler had suction cups on his arms and legs to simulate his wall-crawling ability, etc.

Series II continued that trend, with features like Banshee having a whistle molded into his body and Iceman having a section cut into his "ice slide" into which water could be poured and frozen, then slid down the slide, but the second series started the move away from more overt special features in favor of more authentic sculpts and general playability.

X-Force being so popular as to warrant it's own line/sub-line of action figures is pretty much the early 90s in a nutshell, but it's also telling that of the nine figures released, only three were actual X-Force members, helping supporting characters (at best, at the time) like Kane and Bridge seem like a bigger deal than they were.

Not surprisingly, the first two series of X-Men figures contain several Wolverines, covering both his two mainstay costumes, his short term X-Men uniform (from the brief post-"X-Tinction Agenda", pre-relaunch Jim Lee era of Uncanny) and his look in the then-recent "Weapon X" story (in fact, I encountered that figure and became familiar with that look long before I ever saw any of the actual story on which it's based).

Banshee & Forge are curious additions given that the two aren't officially on either X-Men squad at this time (with Banshee already written out of the series and Forge not long behind him), but presumably, they were included simply on the strength of their being some of the few official-looking X-Men in the non-team era when these initial lines were being developed (plus, Banshee made for a pretty nifty action feature).

Sauron presumably made the cut based on his return as part of the Brotherhood in X-Force (though he isn't part of that subline) and/or on the strength of being a toy-friendly pterodactyl man. Similarly, Mr. Sinister's inclusion is curious, given that he only recently returned in X-Factor and prior to that was really just the guy who died at the end of "Inferno", but of course, his inclusion here is, intentionally or not, prescient, as he'll soon become a much bigger deal in the X-books (and I wouldn't be at all surprised if his inclusion in this early wave helped in part boost his profile amongst fans).

Favorite Figures
Of the first series, I always liked Cyclops, of course, not just because he's Cyclops but also because he's a fairly well-articulated and clean figure, with the light-up visor a great representation of his power. Storm had a nice design but was a rather frail figure, with difficulties standing on her own, and Archangel was another well-designed figure whose action feature didn't takeaway from straight playability (he "launched" "knives" from his wings; really just two little missiles that could flicked out of a slot on the top of his wings). 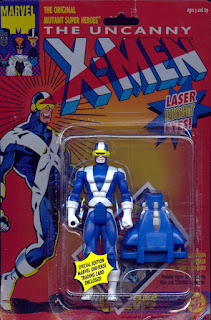 In series II, I've always been partial to the Weapon X Wolverine (whose claws were rendered individually, three on each hand, instead of as one piece of gray plastic as with the others) , Magneto (a bulkier update of the smaller Series I figure) and Banshee (that whistle really was a clever and non-intrusive feature). Mr. Sinister, whose eyes and chest diamond lit up a la Cyclops' visor is also a favorite, though that figure suffers for the the fact that his shoulder points push off his plastic cape whenever his arms are raised up. 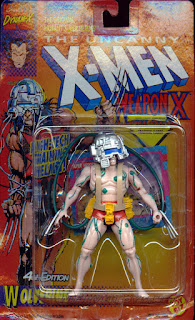 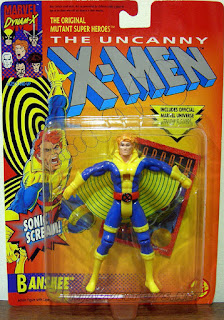 Of the X-Force figures (of whom I had the fewest), Cable, who had a surprisingly streamlined design given some of the busy looks he had in the comics, was always a favorite (I also a had a larger 12 inch version of the figure for numerous years on a bookshelf), along with Stryfe (though he looked better sans mask, which tended to hang off his head at an angle). 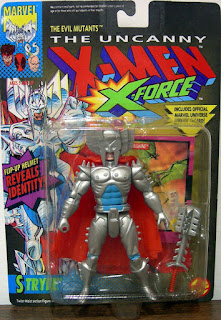 Austin's Analysis
Being a child of the 80s, my love of comic books was prefaced by a love of several different action figure brands, from He-Man to Voltron, Transformers to GI Joe, MASK to Teenage Mutant Ninja Turtles, and countless others (anyone remember the Ghostbusters action figures? Or Visionaries?). As such, once my love for comics, specifically the X-Men, did develop, it didn't take long to merge that with my penchant for action figures in the form of Toy Biz's line of X-Men figures. I didn't really get into the line until the second series, which was on the shelves, in one assortment or another, right around the same time I got into the comics. The idea of comic book-based action figures wasn't new to me; I somehow mostly missed Marvel's Secret Wars offerings, but had a decent collection of the DC Super Powers figures, as well as the tie-ins to the '89 Batman movie (Bob the Goon!) that Toy Biz did, along with a few of their Marvel Superheroes figures that predated the X-Men line, and I'd probably seen the first wave X-Men figures on the pegs while shopping for new Joes or Transformers or whatnot, but I didn't really know much about the X-Men (beyond "Pryde of the X-Men") before I started collecting the trading cards and buying the comics.

As such, the handful of Series I figures I did have, I bought remainder at the same time I was snatching up the Series II (and X-Force) figures. I'm glad I bought them at a discount, because for the most part, the various action features built into the Series I figures are too intrusive, disrupting both the general playability and overall look of the figures. Nightcrawler's suction cup gimmick, for example, is cute, but when you're not sticking him to a window, you're stuck with a figure that has two large suction cups on his appendages. Ditto Colossus, who could lift a large barbell via a lever on his back, but takeaway the barbell, and his arms were permanently molded to be holding it, making it tough for him to, say, punch Juggernaut. Not surprisingly, my favorite figures from that wave are the cleaner ones, with less obvious features, like Cyclops.

But Series II dialed back on the features, making them either less obvious or more clever. Banshee's whistle was easily ignored when not in use, Gambit's spring-loaded leg kick was a pretty standard action figure gimmick, and Iceman could easily be enjoyed without sticking the figure in the freezer every time. The X-Force line was, for me at least, harder to find (whether that was a measure of its relative popularity or just coincidence, I have no idea), but I was able to nab Cable and Stryfe, the two figures I cared about the most. For the most part, the plastic representations of my new favorite characters in these series did their job, but as much as I enjoyed them, it would be later series that really caught my interest, as the forthcoming animated series dialed up my interest in the characters, and further inspired the line overall.
Newer Post Older Post Home
Posted by Austin Gorton at 12:00 PM