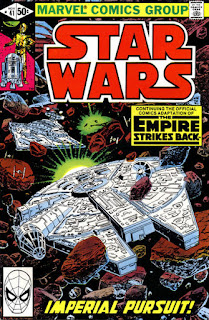 In a Nutshell
The Imperials drive the Rebels off Hoth

Plot
Luke scrambles out of his crashed Snowspeeder and, using a harpoon gun, his lightsaber, and a concussion charge, manages to bring down an approaching walker. Back at the Rebel base, with the Imperials closing in, Han tries to get Leia to her transport, but their access is cutoff, forcing Leia to go with Han to the Falcon. Just as the Imperials are about to blast the ship, Han manages to take off, their escape watched by Luke as he scrambles to his waiting X-wing, and Vader orders his troops to capture the ship. In space, Han manages to evade the pursuing Star Destroyers, but is stunned to discover the hyperdrive is broken. Luke sets a course for Dagobah as Han scrambles to fix the hyperdrive, but he stops when the ship is hit with an asteroid. Han proceeds to recklessly dive into the asteroid field, hoping to use it to shake the pursuing TIE fighters. Eventually, he finds a cave on one of the larger asteroids and flies inside, hidden from the Imperials. Meanwhile, Luke crash lands on Dagobah, his arrival watched by a shadowy figure.

Firsts and Other Notables
Yoda makes his first appearance in the final panel of this issue, from behind, and it's technically a cameo since he doesn't really say anything. Of course, he's not quite the Yoda we all know and love, since the creative team of the series didn't know what Yoda's final look would be while working on this issue.

In the back of the issue, there's an essay from Goodwin detailing the process of adapting the movie in comic book form. He speaks directly about the Yoda discrepancy, explaining that the look of the character was corrected in later issues of this series, but not in the collected editions published around the time of the film's release (which is an interesting circumstance for the series). 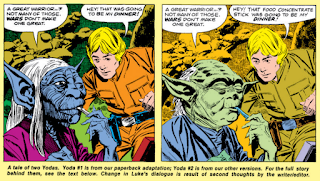 Goodwin also mentions in that article that George Lucas specifically declared that neither the wampas nor the space slug that almost eats the Falcon could be shown in the comic (further evidence that Lucas wanted more from the wampas than the brief shot that appears in the final film). Goodwin also makes reference to the next film in the series, calling in Revenge of the Jedi, so apparently that title was floating around as early as the initial months after Empire (it would of course be re-titled as Return of the Jedi before release).

I should have mentioned it in issue #39, but the series received new corner cover box art starting with that issue, with Artoo and Threepio replacing the previous image of Luke. Goodwin says in this issue that was done because the droids weren't otherwise being featured on the covers of the adaptation much.

This issue's opening splash teases the chase through the asteroid field. 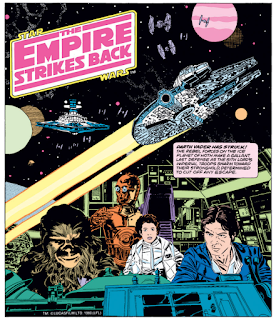 A Work in Progress
Luke notes that Dagobah is not on the charts, nor is it far from Hoth. 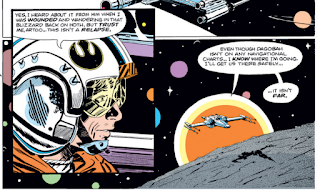 As in the movie, we get a brief shot of a helmet/mask-less Vader this issue. The image here is more shadowed than on film, and it almost looks like Vader has hair. 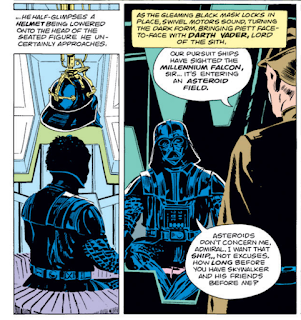 Um, Actually
Threepio misquotes the odds of successfully navigating an asteroid field relative to the film (in the movie, he says its 3,720 to 1, a bit of trivia I made a point of filing away years ago, because I am a nerd). 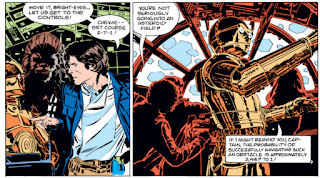 The Space-Lexicon
Threepio refers to the Falcon's hyperdrive as the "para-light" drive. 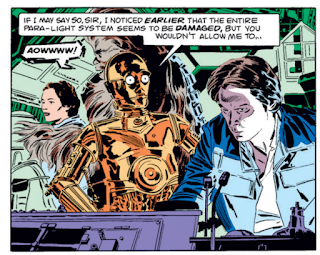 It's in the Mail
The letters in this week's letter column all pertain to issue #38, and are split about even between people raving about Michael Golden's art, and people saying it's the worst abomination they've ever seen.

Austin's Analysis
This issue makes two interesting decisions in terms of adapting the film, First, it sidesteps the subplot involving Threepio luring a group of Snowtroopers into the room in which the Rebels have corralled the wampas that had been attacking them earlier (this appears on the Blu-ray as a deleted scene, and Threepio ripping the warning off the door of the room containing the wampas can be seen briefly in the film's trailer). On it's own, that's not that notable a departure, since the film didn't feature that sequence either, but the series did set it up last issue, suggesting either that Goodwin was working off a transitional draft in which the wampas attacking Echo base was in, but them attacking the Imperials was not.

Secondly, this issue significantly shortens the Battle of Hoth by cutting from Luke downing a walker to Han and Leia's escape in the Falcon, moments before Vader reaches them. In the back matter, Goodwin speaks to the inherent difficulties adapting a kinetic action sequence like the Battle of Hoth in the relatively motionless medium like comics, and he's not wrong, but it still seems odd to not, at the very least, include General Veers' advance on the base and destruction of the shield generator, which is what signals the end for the Rebels and allows the Imperials into the base in the first place. To be clear, neither of these decisions are bad, they're simply different, and they do manage to make reading the adaptation something more than just a standard translation of film events to page.