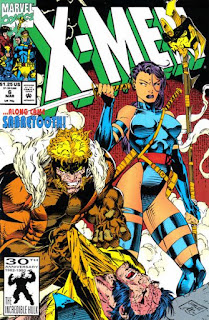 In a Nutshell
Sabretooth joins the hunt for Wolverine.

Plot
Cyclops, Beast & Jubilee easily dispatch the Hand's ninjas, but are no match for Omega Red, who overpowers them. Meanwhile, Maverick attempts to revive Wolverine, who is flashing back to the Berlin mission at the point where Creed executes the scientist they were tasked with retrieving so he, Logan and Maverick could escape from Omega Red. Someplace else, Longshot, Dazzler & Lila Cheney appear before Mojo, Lila's teleportation co-opted by Mojo. But they manage to escape with the help of some rebels, and rejoin the force opposing Mojo. Back in Berlin, the rest of the X-Men are defeated when Matsu'o regains control over Psylocke, an act which wakes up Wolverine. He lashes out at Maverick and the two fight, until Sabretooth appears on Maverick's monitors. Sabretooth proceeds to gloat over the captive X-Men and agrees to help Matsu'o track down Wolverine, with Psylocke's help. They find Wolverine & Maverick, but the fight is relatively one-sided, as Wolverine is too weak to put up much of a fight and is easily recaptured. Fenris & Matsu'o toast to their success, and then Matsu'o tells Omega Red he may kill however many of the captive X-Men he wishes.

Firsts and Other Notables
Sabretooth's new Jim Lee-designed costume debuts this issue, and thanks to its use in the animated series, it's become his default look for an entire generation of fans (he'll stick with it for a few years, before a series of attempts to keep him around the X-Men more replace it with some other looks). For the most part, I like it (and I like the idea of Sabretooth being more of a hulking bruiser, as Lee also bulks him up quite a bit, relative to the more lithe and smaller Wolverine), though it helps that it was the costume he wore when I first encountered him, and I certainly don't dislike his old look either. 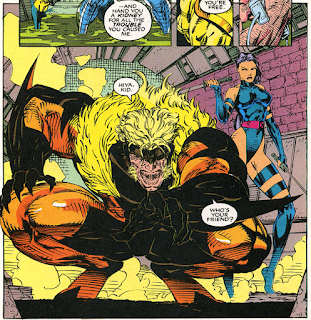 This issue also establishes a shared history between Sabretooth and Gambit, something that will cause quite a bit of fan fervor and speculation in the years ahead (a past meeting between the two will eventually be detailed in issue #33, and after that, it'll be established that Gambit helped assemble the Marauders prior to the Morlock Massacre) but for now is simply intended to add to the history and mystique surrounding Gambit. Sabretooth's dialogue here also hints at one of Claremont's initial ideas for Gambit, that he was planning on betraying the team from within. 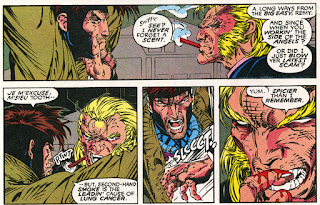 Sabretooth also refers to Gambit as "Remy", the first time his real first name has been used.

Picking up where the Longshot/Dazzler/Lila Cheney appearance last issue left off, Mojo appears briefly in this issue, before the trio escapes and meets back up with the rebels opposing Mojo, at which point Longshot & Dazzler reconnect, setting up the story which will unfold in issues #10-11. 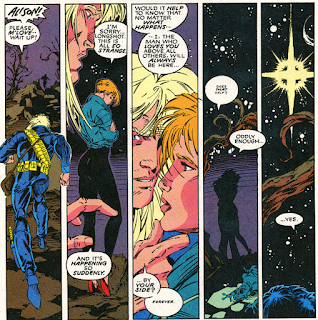 More background on Maverick: his real name is David North (though I think that might get retconned out) and he's working for someone he only refers to as "Major" to acquire the carbonadium synthesizer (the same thing the bad guys are after and which Team X acquired back in the 60s). This issue also establishes his kinetic absorption mutant power.

Sabretooth's associate Birdy appears for the first time this issue. Here, she's presented simply as a sort of Gal Friday with some telepathic powers; later stories will establish that she routinely provides Sabretooth with a telepathic "glow" that calms his more baser urges. She'll appear a few times in the years ahead, before she's killed off as part of the larger storyline that culminates in Sabretooth becoming a prisoner of the X-Men. 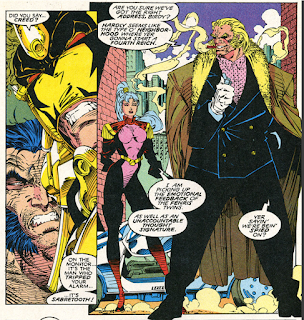 Cyclops mentions a pack of killer robots hunting down Sabretooth, a reference to the end of the "Shiva Scenario" in Wolverine #50, in which Shiva gave up on Wolverine and moved down its list of targets to Sabretooth. 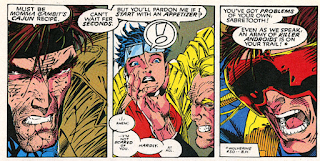 As with this month's issue of Uncanny, Scott Lobdell replaces John Byrne as scripter, though his initial tenure on this title will be more of a fill-in, as he'll shortly give way to new ongoing writer Fabian Nicieza.

The Chronology Corner
A footnote explains that this story takes place after the events of "The Crunch Conundrum" over in Wolverine.

A Work in Progress
Omega Red is said to be the Soviet union's first attempt at creating their own super-soldier, a la Captain America.

Carbonadium is described as being akin to adamantium, less strong but more malleable, and Omega Red is able to use his coils to focus his "death factor" power. 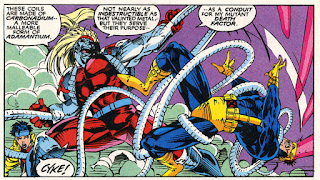 Maverick mentions the healing cells Wolverine stole last issue, a retroactive attempt to explain the silver canister Wolverine was suddenly carting around (and which disappeared just as suddenly when Jim Lee decided to stop drawing it). Presumably the idea is that Dr. Cornelius extracted some of Wolverine's healing cells for some reason, and Wolverine proceeded to steal them back.

The psychic bond between Psylocke and Wolverine, established during the events of the "Lady Mandarin" story in Uncanny #256-258, is referenced here.

In another reference to that story, it's revealed here that Matsu'o established a post-hypnotic suggestion that enables him to regain control of Psylocke here. 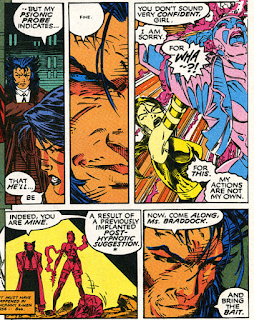 As with Wolverine, Sabretooth remembers neither Maverick nor their previous encounter with Omega Red back in the 60s.

The Reference Section
Omega Red makes a reference to depending on the kindness of strangers, an apparent nod at the Tennessee Williams play A Streetcar Named Desire, an odd reference for a Soviet solider who's been on ice since World War II to be making. 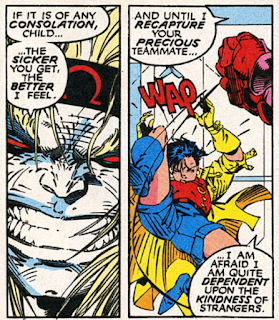 The Grim 'n' Gritty 90s
Gambit wonders if all bad guys are required to have pony tails. 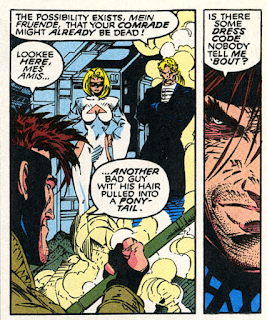 The Best There Is At What He Does
Wolverine gives Maverick the old "don't make me pop the third claw" routine. 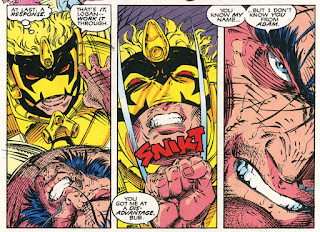 It's also established that when Wolverine, Sabretooth and Maverick were all working together as Team X (still not called that in the text), they were CIA agents at the time. They also weren't aware they were all mutants, though Sabretooth suspected as much (it's not even clear if, at the time, Wolverine knew he himself was a mutant). 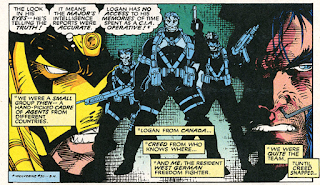 It's in the Mail
A response to a letter in this issue wrongly confirms the Magneto/Moira retcon from issue #2, saying that Moira's alteration of Magneto's genetics is responsible for his Claremont-era reformation, despite the fact that issue #3 clearly establishes that not to be the case, both via Moira's dialogue declaring that the process wore off almost immediately after Magento started using his power, and from the fact that the same process, when applied to the Blue Team, began to wear off almost immediately after they started using their powers. But, this is probably one of the reasons why we still see that "Magneto's heroism was manipulated by Moira" bit sneak into reference material on occasion, despite the text itself clearly refuting it.

John Byrne on leaving the X-books
"The problem was the books were terminally late when I was asked to script them. Jim [Lee] and Whilce Portacio would both send me the plot and then they'd send me three pages of pencils. I'd script those because they had to be scripted right away and fax the scripts directly to Tom Orzechowski, who was lettering the book. I bought my first fax machine working with those guys. Then I'd get one more and the one page didn't match the first three pages because they'd taken off on a tangent, and they were both doing this. So I was constantly re-writing, and re-writing and writing. It was just a nightmare. I was working weekends, which I never used to do in those days. I finally called Bob Haras and said, 'Something's gotta be done about this. This is insane.' And Bob said, 'We'll take care of it.' Years later I was told, you should always be careful when Bob says, 'We'll take care of it.' What ultimately happened was about two weeks later, Terry Austin called me and said, ''Hey, I hear Scott Lobdell is writing X-Men,' and I said, 'Huh?' And he said, 'Yeah, at a barbecue at Berni Wrightson's place, some friend of Scott's was there and said he's just picked up the X-Men assignment.' That's how I found out I wasn't writing X-Men, that's how they'd taken care of it."

Austin's Analysis
This issue is steeped in X-Men history: from references to contemporaneous Wolverine stories (the simultaneously-unfolding "Crunch Conundrum" and the recently-completed "Shiva Scenario") and Psylocke's transformation at the hands of Matus'o, to acknowledgements of shared pasts between characters, both new (Gambit & Sabretooth, Maverick and Wolverine & Sabretooth) and long-established (Wolverine & Sabretooth). Reading this for the first time, it's easy to get swallowed up by the concept of an ongoing narrative that stretches back an untold number of issues, to realize this issue is but one chapter in a massive ongoing saga. Some critics, then and now, would argue this makes it impenetrable to new readers, a game-ending turn-off, but when pre-teen me read this for the first time in the early 90s, it had the exact opposite effect: it sucked me in, cemented my growing affection for these characters, convincing me this was a narrative I wanted to explore specifically because it was clearly so steeped in history - that just meant more comics to read.

Of course, it would be years before I realized that some of this - like the Gambit/Sabretooth interactions and everything involving Maverick - was as much a mystery to fans who had read every issue as it was to me (and even longer before I realized this was the first appearance of Sabretooth's Gal Friday Birdie, whom I had just assumed was someone he was always paired with, or that Sabretooth's history with the X-Men as a whole was more limited than this issue suggested), but that didn't change the fact that the glimpse into a larger world this issue provided got me hooked. 90s comics get a lot of flak for being impenetrable and convoluted, sometimes rightly so, but when done well, that same level of complexity can be a feature, not a bug. This issue does it right, at least as far as twelve-year-old me was concerned.

Next Issue
Tomorrow, the anti-Phoenix is unleashed in Excalibur #48. Friday, Wolverine travels to the end of time in Wolverine #52. Next week, the conclusion to "War and Pieces" in Incredible Hulk #392.