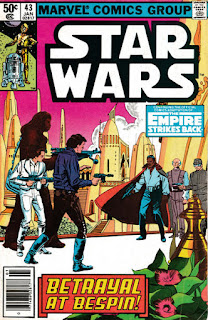 In a Nutshell
Han is betrayed by Lando and frozen in carbonite by Darth Vader.

Plot
The Millennium Falcon arrives at Cloud City on Bespin and receives a chilly reception, but Han's old friend Lando Calrissian quickly drops the ruse and warmly embraces his old friend, promising to help repair the ship. Meanwhile, on Dagobah, Luke enters a cave steeped in the Dark Side and battles a vision of Darth Vader which, when defeated, reveals Luke's face beneath the mask. On Bespin, Chewbacca turns up with Threepio, who's been blasted into pieces, while on Dagobah, Luke experiences a vision of his friends suffering and dying. Lando invites everyone to dinner, but they arrive to find Darth Vader & Boba Fett waiting for them. On Dagobah, Luke decides to leave to rescue his friends, over Yoda and Obi-Wan's warnings. On Bespin, as Han is tortured, Lando explains Vader only wants Luke. Vader proceeds to test Lando's carbon freezing process on Han, hoping to use it to capture Luke alive. As Han is lowered into the chamber, Leia declares her love for him, just as Luke arrives at Cloud City.

Firsts and Other Notables
Han is frozen in carbonite in the conclusion of this issue (though the cliffhanger ending leaves it open as to whether or not he survived the process), making this the last issue of the series in which Han will appear (outside of flashbacks/dream sequences/etc.) until after Return of the Jedi. I can only imagine what Goodwin and company felt about having to write out one of the series' most popular characters for several years. 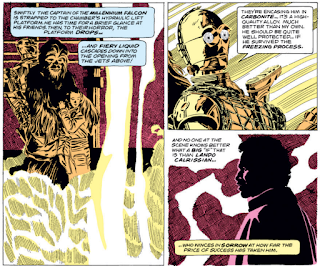 Lando Calrissian makes his first full appearance this issue, after being mentioned in the previous issue and depicted in that issue's back matter.

As in the movie, Yoda and Obi-Wan speak of "another" who may help defeat the Emperor after Luke impetuously runs off to Bespin; Return of the Jedi will of course reveal this other as Leia, Luke's secret sister.

The planet Bespin  and Lando's mining facility, Cloud City, appear for the first time this issue, and both are referred to in the comic (I believe on film it's only ever referred to as the "city in the clouds", with the official names coming from ancillary material like the toys (and this issue).

Lando's aide-de-camp Lobot also appears for the first time in this issue (and gets named, which he isn't in the film). Lando also drops a "I've got a bad feeling about this". 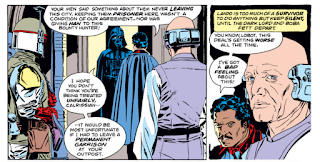 This issue concludes with a series of pinups featuring various scenes (some more embellished than others) from the movie, drawn by a veritable Who's Who of late 70s/early80s Marvel artists, including John Byrne and Frank Miller. 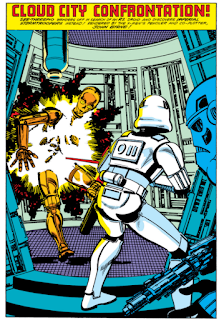 A Work in Progress
It's established here that Lando previously owned the Falcon, and that Han won it from me, which is one of those little world-building details I've always loved (which obviously comes from the film).

It's suggested here that Luke's ability to see Obi-Wan's Force ghost is tied to his training - the better he is able to focus, the more he's able to see Obi-Wan and not just hear him.

Later in the issue, Force Ghost Obi-Wan appears for the first time. 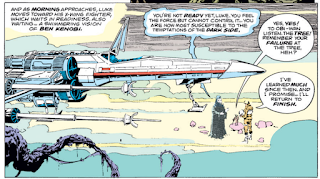 As in the movie, Vader is able to deflect Han's blaster shots with the Force, one of the more overtly physical (in terms of telekinesis) uses of the Force we've yet to see. 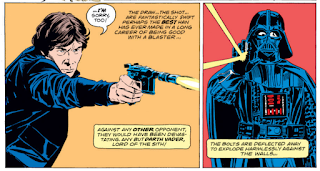 Threepio is blasted apart by Stormtroopers this issue, having accidentally discovered them in Cloud City prior to the reveal of the Imperial presence in the city, prompting him to be carried around on Chewbacca's back (and resulting in one of my favorite toys as a kid, the pull-a-part C-3PO with carry net).

That 70s Comic
Upon meeting Leia, Lando immediately starts hitting on her as he and Han argue over to whom she belongs.

Um, Actually
Luke's encounter with a spectral Vader that reveals his own face inside a cave steeped in the Dark Side on Dagobah occurs in this issue, out of sequence from the rest of the events on Dagobah. 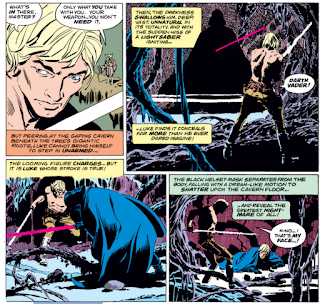 Here, Luke is depicted as being plagued by visions of Han & Leia suffering and dying before he decides to cut his training short and leave Dagobah, whereas in the movie he pretty much takes off after the first such vision.

Unlike in the movie, Han doesn't immediately blast Vader on sight, but first responds to Lando.

Instead of the classic "I love you/I know" between Leia and Han as Han is lowered into the carbonite freezing chamber on Bespin, he responds with "I'll be back". 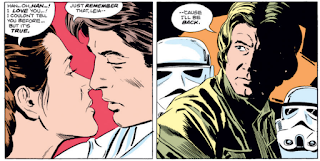 The Ugnaughts, the small porcine-like beings on Cloud City who worked the disposal facility where Chewbacca found Threepio and the carbon freezing chamber in the film, don't appear in the comic.

It's in the Mail
A response to a letter in this issue asking why the comic book hasn't been retitled The Empire Strikes Back references George Lucas' plan to release nine total films, an idea still being put forth in 1980.

Austin's Analysis
In terms of screen-to-page adaptation, this is probably the most straight-forward chapter of the story yet. The Dark Side cave on Dagobah gets moved here, after Yoda raises the X-wing, and the Han/Leia dialogue as Han goes into carbonite is different (not surprisingly, given that the classic "I love you/I Know" call-and-response was ad-libbed), but otherwise, this is a pretty faithful retelling of the events of the first half of the film's third act. That said, like the previous chapter, it feels, if not rushed, then sped up relative to the earlier chapters of the story.

Where the comic book trimmed out a lot of material from the Battle of Hoth, the cut material was mostly action sequences, and wasn't missed because the general idea of the Empire attacking the Rebel base was still there. Here, the growing sense of unease surrounding events on Bespin, as well as Han and Leia growing closer as those events get worse and worse, unfolds rather perfunctorily, a series of "and then this happened, then this happened, then this happened" sequences, telling readers what's happening instead of showing. Again, it's a necessary evil of the transition from screen to comic book page, but it nevertheless results in the weakest comic book chapter of the story yet.