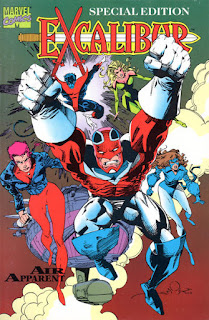 In a Nutshell
Excalibur battles a mad scientist and his Air-Walker android.

Plot
Excalibur is briefed by WHO about Dr. Cayre, a brilliant bio-physicist who has gone mad. He has recreated Galactus' android herald Air-Walker, who has subsequently gone on a rampage, equipped his Life Model Decoy lab assistant Norm with a nuclear warhead, and experimented on himself, giving him the ability to unravel a person's genetic structure with a touch. Excalibur proceeds to split up, with Nightcrawler defeating Norm, Shadowcat defeating a failed Air Walker prototype, Meggan battling the mercenary Coldblood before destroying Cayre's lab, Phoenix trapping Cayre himself in a prison of glass, Captain Britain destroying the rampaging Air-Walker, and Lockheed defending the lighthouse from some overzealous WHO agents.

Firsts and Other Notables
The main plot of this issue revolves around an attempt by one-off scientist Dr. Cayre to resurrect the android Air-Walker, who once served as a herald of Galactus (Galactus' heralds kind of had an elemental theme, so Air-Walker is air to Firelord's fire, Terrax's earth and, I guess, Silver Surfer's water). In addition to Cayre, a Cayre LMD and a couple Air-Walker androids of varying degrees of completion, this issue also features Coldblood, a relatively new cyborg mercenary character created by Doug Moench & Paul Gulacy in Marvel Comics Presents. He'll pop up again in Deathlok and much later, very briefly, in Civil War, but his biggest claim to fame is being the inspiration of James Badge Dale's character in Iron Man 3 (he was the chief henchmen to Guy Pearce's Aldrich Killian). 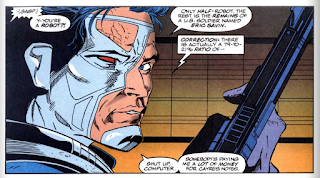 I still have no idea if this or Excalibur: Possession is considered the series' 1991 annual, but like that book, it's a double-sized one-shot that could easily serve that purpose.

All else aside, not a bad Walt Simonson cover on this one.

The Chronology Corner
This issue takes place after Possession, between issues #41 and #42 of the regular series (after Nightcrawler regained the ability to do multiple teleports, but before his leg was broken by Captain Britain).

The Reference Section
Kitty battles a creature that seems very reminiscent of the xenomorph from Alien, which in turn could be a reference to the Kitty vs. the N'Garai demon story in X-Men #143. 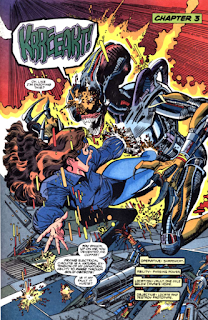 Austin's Analysis
I don't know the genesis of this story, but between the structure (a series of chapters drawn by rotating artists featuring one member of the team per chapter) and the presence of Scott Lobdell (who cut his teeth on the series) it really reads like a re-purposed Marvel Comics Presents story (this is also Lobdell at his schtickiest, with everyone from Nightcrawler (fine) to Kitty (I guess) to even Meggan (huh?) cracking wise in their chapters, a hallmark of his earlier writing). It's also reminiscent of a Marvel Comics Presents story in that it's utterly superfluous: it has no bearing on any ongoing storyarcs, does nothing to develop the characters, speaks little to any of the series' themes, or even features any villains germane to the series. This feels like a relic of the pre-Alan Davis days, when the series just sort of listlessly existed. There's some decent art in some of the chapters - Ron Lim is reliable as always on the framing chapters, Brian Stelfreeze does some nice work, it's always good to see Rick Leonardi, and Erik Larsen is a surprisingly good fit for Captain Britain's chapter in an over-the-top, proto-Image kind of way - but otherwise, like so many other Excalibur one-shots, this is eminently skippable and ultimately forgettable.