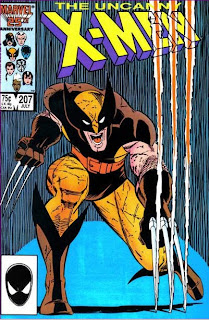 In a Nutshell
Phoenix decides to take out Selene, forcing Wolverine to stop her.

Plot
The X-Men are staying in the Morlock Tunnels as Wolverine recovers from his recent wounds. Rachel is plagued by dreams in which she's stalked and killed by Wolverine, as she's psychically pulling his mind into hers, forcing him to share the dreams with her. Finding little sympathy amongst the X-Men, who are in some cases still resentful of Rachel having taken their life essences to battle the Beyonder, she leaves the tunnels to wanders the streets of New York. Wondering if it wouldn't have been better for her to die in the future along with her teammates, she falls asleep on the subway. After being awoken by a kindly police officer, she is reminded of the kindness she received from a stranger her first night after arriving in the present, a man who was killed by Selene. Determined to do something good, she sets off to finish Selene once and for all. 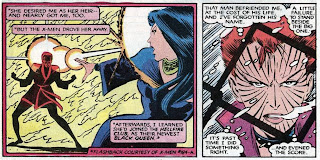 Back in the tunnels, the X-Men realize both Rachel and Wolverine are gone, and set out to search for them. Meanwhile, Rachel, with the help of a telepathically-swayed Friedrich von Roehm infiltrates the Hellfire Club and confronts Selene. Though Selene fights back, she is ultimately overwhelmed by Rachel's greatly increased power. Just as Rachel is about to kill her, Wolverine enters the room, alerted to Rachel's intentions through their inadvertent psychic link. He tells her to stop before it's too late, arguing that though both of them have killed before, what she stands ready to do is murder, and that both she and the X-Men are better than that. Rachel insists that Selene deserves to die, for the people she has killed and will kill, and that as Phoenix, she can make her own rules. She tells Wolverine the only way to stop her is to kill her. Wolverine responds by thrusting his claws into her gut.

Firsts and Other Notables
This issue is somewhat infamous for its ending, in which Wolverine argues with Rachel that there is a difference between killing someone and murdering them, then proceeds to lethally stab her with his claws, attempting to stop her from murdering Selene...by killing her. 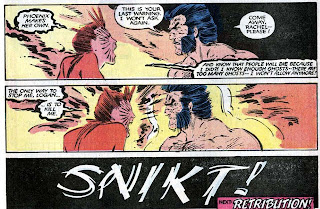 It's rather awkward, but Claremont later said in interviews that his intention was to show that Wolverine tried to kill Rachel out of fear that she would become another Dark Phoenix, which makes a bit more sense. Of course, as I'll discuss below, this doesn't come across at all in the text itself, and it stands as a bit of eyebrow-raising and muddied characterization.

The Inner Circle of the Hellfire Club (consisting of Sebastian Shaw, the White Queen, Selene, etc.) is referred to as the Lords Cardinal for the first time, and moving forward, that term will be used more often than not.

As of this issue, the X-Men are back in New York, though they're temporarily staying in the Morlock Tunnels as Wolverine recovers from the wounds suffered in issue #205.

I probably should have mentioned it last issue (I forgot), but this is the first issue of the series (starting with the relaunch in Giant Size X-Men #1) to not be reprinted in Classic X-Men/X-Men Classic as that series was cancelled after the issue which reprinted #206.

A Work in Progress
Rachel notes that she was placed in the internment camp with the rest of the surviving X-Men (where she was first seen in X-Men #141) after serving the government as a Hound, thus reconciling her two future activities. It's noted that all of the remaining X-Men ultimately forgave her, save Wolverine. 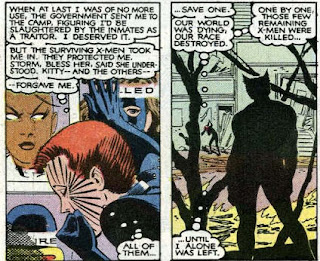 No indication is given as to how the X-Men found Wolverine or learned of his battle with Lady Deathstrike. Additionally, the X-Men's reaction to Rachel and the events of issue #203 are somewhat odd coming in this issue, given that they were all living together in San Fransisco last issue with seemingly no problems, yet now Storm is treating Rachel coldly. 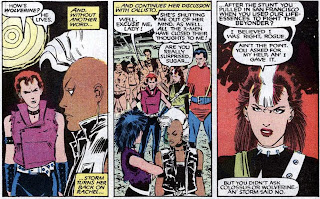 Rogue notes that many of the Morlocks intentionally mark themselves as outcasts as a badge of pride, partially explaining why so many Morlocks look like more than just regular hobos. 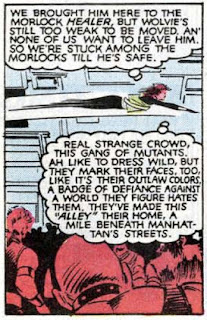 The Best There is at What He Does
Wolverine is shown recovering from his wounds suffered during the fight with Lady Deathstrike in issue #205 (as well as his encounter with the Beyonder in Secret Wars II). It's said that even the Morlock Healer has helped him, and he's still too injured to be moved (which is why the X-Men are staying in the tunnels), which, given how effective his healing factor is these days, is pretty remarkable. 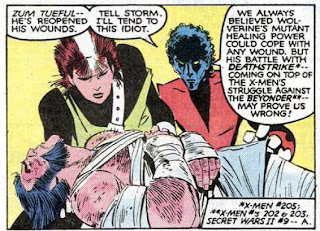 Like a Phoenix, From the Ashes
Sneaking into Selene's room, Rachel recaps the events of "The Dark Phoenix Saga". 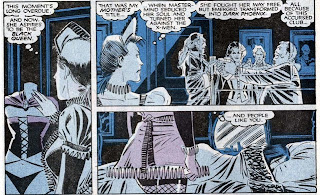 Rachel Summers, Crybaby
Waking up from her dream, Rachel lashes out, promptly destroying the property of the people with which she's staying. 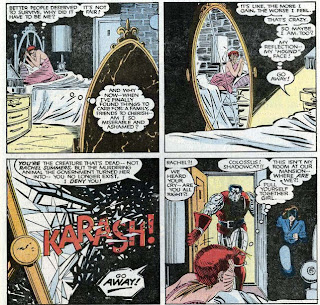 For Sale
This issue is featured in a Marvel house ad that ran this month, an ad which was included in this issue, creating a kind of Moebius Strip situation in which the ad promoting the comic appears in the comic the ad is promoting. 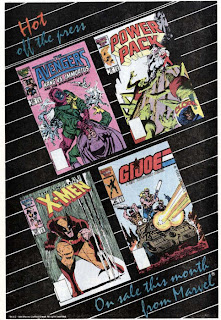 Teebore's Take
This has always stuck out as an odd issue. Structurally, it serves as the beginning of a three part story that will ultimately see the X-Men, the Hellfire Club and Nimrod in a three-way battle (and in a nice little trick, each part of the story widens the previous one: here, Rachel attacks Selene. Next issue, the X-Men and Inner Circle come to the aid of their members-at-large, before Nimrod joins the fray for the third issue). This story will also write Rachel out of the book for the foreseeable future, so it's appropriate that she serves as the catalyst of the conflict and takes center stage in this issue, a last hurrah for the character in Uncanny X-Men (of course, in execution, this means a return to the largely insufferable, angsty Rachel, as she finds herself recalling the events of issue #184, a time where the few elements of her character that aren't annoying hadn't yet been established).

Where the issue falters, then, is in its infamous ending. Claremont has, in later interviews, made clear what his intentions were for the ending, that Wolverine was acting out of fear that Rachel, killing in cold blood, in the very place from which her mother emerged as Dark Phoenix, would be corrupted by the power of the Phoenix. Unfortunately, none of that is one the page, as Wolverine instead shows up and tries to argue the distinction between killing and murder. Unfortunately, the case as presented isn't as clear cut as Wolverine would like. While it's true that Rachel's attack is a pre-emptive strike and not made in self-defense, she isn't exactly attacking an innocent, or even someone who's sworn off their villainous ways. Selene will kill again - she must, in order to survive, and Rachel is correct that it would be difficult for the established authorities to arrest, try and hold Selene. Thus, whatever point Wolverine is trying to make, on page at least, is muddied, at best, and not given the space it needs to be made. That Claremont had to ultimately explain what he was trying to say in interview makes this clear, and unfortunately, that muddiness lets down an otherwise fine issue that kicks off a rather fun story.

Next Issue
Tomorrow, Sam gets the solo spotlight in New Mutants #41, followed by more of Apocalypse in X-Factor #6, and next week, the X-Men and Hellfire Club join the fray in Uncanny X-Men #208.
Newer Post Older Post Home
Posted by Austin Gorton at 12:00 PM