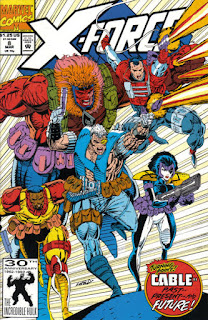 In a Nutshell
A flashback reveals Cable is from the future.

Plot
As Cannonball lies dying, Cable flashes back to a mission involving the Wild Pack, the mercenary group he led alongside Domino, Bridge & Kane, retrieving a piece of equipment for AIM that was stolen by Hydra. After handing the device over to AIM, the team goes their separate ways until their next job comes along, with Cable returning home to the future. There, he confers with Professor, his sentient computer, and learns of a possible new High Lord awakening: Sam Guthrie. Determined to guide his development and believing this to be the chance they've been waiting a long time for, Cable has Professor timeslide him into the past, roughly six month's before Sam's awakening. Back in the present, Cable is wondering why Cannonball isn't waking up from Sauron's attack, thinking maybe he was wrong about him. But, Cable insists to Sauron as he shoots him, if he was wrong, Sam won't be the only one who pays.

Firsts and Other Notables
Taking a break from the Brotherhood/X-Force fight, this issue is mostly a flashback into Cable's past. It opens with Cable leading a mercenary group called the Wild Pack into battle, comprised of himself, Domino, GW Bridge, Kane (the current Weapon X introduced in issue #2), Grizzly and Hammer. This is the first collective appearance of the group (who will eventually be re-christened the Six Pack), and the first appearances of both Grizzly and Hammer (both of whom will eventually turn up in the present day as well, and it establishes how at least a few of the characters in the series (Domino, Bridge, and Kane) know Cable from his pre-New Mutants/X-Force days (also, given that, retroactively, the Domino who has been appearing in this series is actually Deadpool's shapeshifting girlfriend Vanessa, this is technically the first appearance of the real Domino). 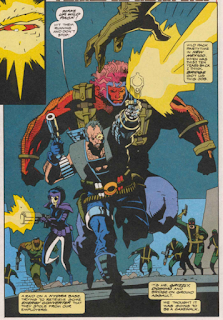 This issue also reveals that Cable is a time-traveler from the future (something mildly hinted at in previous issues), and that the reason he hooked up with the New Mutants, started to train them and transformmed them into X-Force was, at least in part, to guide the ascension of Cannonball, whom he believes to be a High Lord. 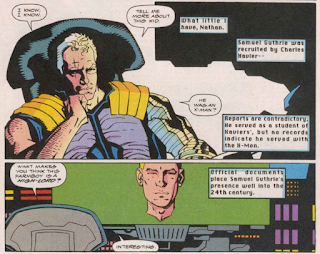 We'll learn more than we ever want to know about High Lords shortly, as that particular plot thread introduced here will come to dominate the series in Liefeld's final days (and I have some things to say about it), but ultimately, Sam's status as one gets retconned out and Cable is given different motivations for traveling through time, so that particularly plot beat doesn't matter as much as the fact that Cable is a time-traveler.

Cable is attended to in the future by a group of robots named after the original X-Men, and talks with a sentient computer, which is named Professor, "appearing" here for the first time. Professor is eventually revealed to be a remnant of Ship, the sentient program from X-Factor's previous base of operations, whose energy matrix traveled into the future with Cyclop's son Nathan in X-Factor #68, something alluded to here. All of this, the Professor and the robots named after the X-Men plus the time-travel element, is the first significant tease that Cable is a grown up Nathan, and the most definitive bit of evidence on the subject until "X-Cutioner's Song" comes along. 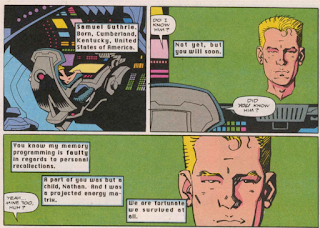 Professor notes that Cannonball was never technically one of the X-Men; in fact, he does eventually join the team (and even later, becomes an Avenger as well).

While Rob Liefeld draws the framing sequence, the bulk of this issue is illustrated by future Hellboy creator Mike Mignola. I know he was doing some work for the X-office around this time, providing new covers to the X-Men Classic reprint series, but I'd love to know how he ended up drawing this story; was it intended as a deadline-saving fill-in story, possibly without the time travel stuff? Was it always meant to go here, in the middle of the larger Brotherhood fight? Why did Liefeld hand over such significant developments in the series (revealing Cable as a time traveler and his motivations for getting involved with the New Mutants) to a guest artist?

The Kane backup story from the previous issue (which ended on a cliffhanger) isn't continued here, but Liefeld does pad the issue out with a pair of Cable-centric pinups, one of which teases the death of Gideon (though he doesn't die in 1993). 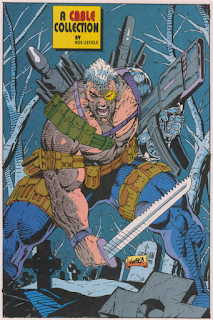 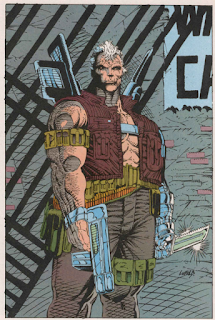 A Work in Progress
Kane makes a joke about Cable being out of touch, asking what time he's from, teasing the later reveal. 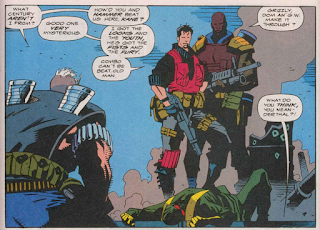 Cable (in the past) has apparently never heard of Baron Strucker. 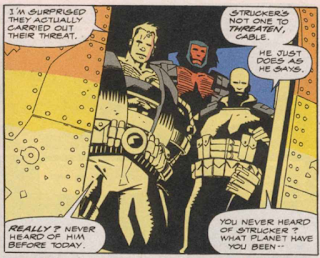 Wild Pack was hired by AIM, another hint at the connection between that group and Cable (which ultimately goes nowhere).

In the present, while Boom-Boom is beside herself with grief over Sam's apparent death, Cable wonders why he isn't waking up, noting that while Sauron stabbed him, his body remains intact, suggesting a limitation to the apparent regenerative abilities of High Lords.

It's in the Mail
This issue features a two page letter column, containing mostly rave reviews about the series as a whole and Deadpool in particular.

Austin's Analysis
Without a doubt, this is the best issue of the series yet. Not just because the majority of it is drawn by Mike Mignola instead of Rob Liefeld (though that certainly helps) but because after twenty plus issues, it finally provides us with some backstory on Cable, establishing that he's from the future, that his hinted-at-past with Domino, Bridge and Kane included time together as a mercenary group, that he holds the original X-Men in some esteem, and that his whole reason for getting involved with the New Mutants in the first place is because of Cannonball. It's certainly not groundbreaking character work (and some of it will lead to some bad ideas that ultimately get retconned out), but it at least gives Cable some context, a little bit of depth and history, and the series as whole along with him.

I devoured this issue as a kid, reading it over and over, convinced Cable was Cyclops' son and that's why his robots are named after the original X-Men, that Professor was Ship and his memory was faulty from going into the future with baby Nathan, captivated by the notion of Cable going back in time to influence future events. I loved (and still do) time travel stories, and being a huge Cyclops fan and slightly obsessed with the fate of his son, I was also a huge fan of Cable and absolutely captivated by all these mysteries and teases and hints about him. That Cable's motivations hinted at here are ultimately overwritten and lead, in the near term, to some pretty questionable creative decisions, or that most of what we learn about him here ultimately just inspires more questions, or that this flashback story prolongs the already overly-long fight with the Brotherhood, doesn't really matter - the important thing is that we're finally learning something about Cable.

Next Issue
Tomorrow, Wolfsbane prowls the streets of Trans-Sabal in X-Factor #76. Next week, X-Men #6 and Excalibur #48.