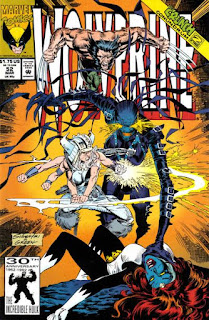 In a Nutshell
Spiral takes Wolverine & Mystique to the end of time.

Plot
Spiral, Mystique & Wolverine are attacked by a plasma wraith sent after Spiral. After they defeat it, Spiral casts a cloaking spell that hides them, just as Albert, Elsie-Dee & Hunter in Darkness fly overhead on their way to Canada. Spiral explains that time travelers from across realities are being drawn to the Crunch, the Big Bang's opposite at the end of time. When an uncertainty nullifer beam tries to blast them from the TV, Spiral declares they're not safe in the past, and opens a vortex that sucks in the room's furnishings and Wolverine's motorcycle, as well as the three individuals. Jubilee, just arriving outside the room, avoids the vortex, and goes inside to discover Mojo, wanting to know where Spiral is. Wolverine, Mystique & Spiral end up at the Crunch, battling and defeating another wraith, after which Spiral declares that Mojo is threatening all existence. Back at the motel, Mojo captures Jubilee and heads to the Crunch, while in Canada, Hunter in Darkness leads Albert and Elsie-Dee to a native burial ground, where they find an adamantium skeleton with claws amongst the remains.

Firsts and Other Notables
Mojo, who, between this and X-Men #6, is having himself a month, appears in this issue, though the full extent of his involvement remains unknown. 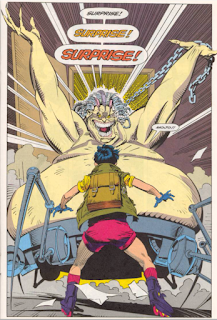 He is accompanied by a teleporter named Abcissa, who in the next issue will turn out to be an alternate future Jubilee, then never be seen again. 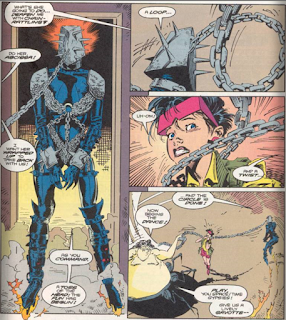 Amongst the various alternate Spirals is a woman meant to represent Ricochet Rita; the upcoming X-Factor Annual #7 will establish that Rita and Spiral are the same person. 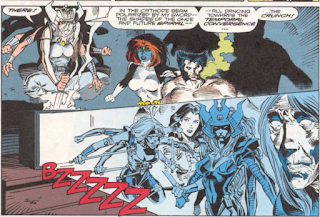 Gateway is shown amongst the people being affected by the Crunch, the first time we've seen him since Uncanny #281. 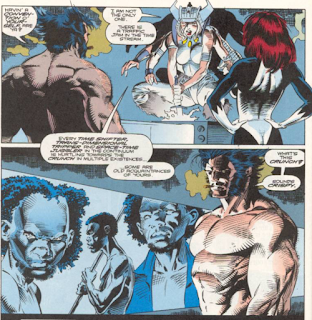 A Work in Progress
Spiral describes the end of all existence as "the crunch", the counterpart to the Big Bang.

The Grim 'n' Gritty 90s
Jubilee makes a crack about global warming, which is hilariously of-its-time because we didn't at all politicize this very important issue endangering our very existence as a species and instead, in the time between when this comic saw print and today, agreed the problem existed, buckled down as a unified group and took some serious steps to improve the situation and make it less dire. 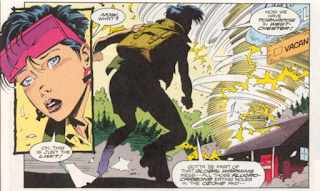 Austin's Analysis
Well, that went off the rails fast. Last issue was, at best, a slow burn examination of Wolverine's new wilder side, setting up a noir-ish kind of tale with Mystique on the run from Spiral (less charitably, it was a lot of re-hasing of the same idea over and over until the end). But that all gets tossed out the window this issue: Spiral no longer seems terribly concerned with Mystique, the noir vibe gets replaced with plasma wraiths, Mojo, and fantastic trips to the end of time, and it's terribly unclear what Wolverine (or even Mystique, really) is even doing here. Not every story needs to be a searing examination of Wolverine's past, but even more high concept tales like the trip to the Spanish Civil War seemed to be trying to say something about Wolverine as a character. This reads more like Hama wanted to do a trippy Mojo story and just decided to bring Wolverine along for the ride. Which is not at all where the first chapter of the story seemed to be going.