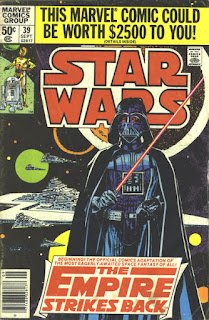 "The Empire Strikes Back"
September 1980

In a Nutshell
An Imperial Probe discovers the location of the Rebel's new base on Hoth.

Plot
Patrolling on the ice world of Hoth, Luke is about to investigate a nearby meteorite when he's attacked by some kind of creature. Later, Han returns to the Rebel's Echo Base having finished his own patrol, and announces his intent to leave the Rebellion to square his debt with Jabba the Hutt. Elsewhere, Luke awakens upside down inside a cave, and uses the Force to call his lightsaber to his hand, freeing himself and fighting off the creature before fleeing into the freezing night. At Echo Base, Han learns Luke is missing and races off into the night to find him, while Luke is visited by the spirit of Obi-Wan Kenobi, who advises him to go to Dagobah, to learn the ways of the Force from Yoda. Just then, Han comes across the nearly dead Luke, and erects shelter. The next morning, however, a patrol Snowspeeders tracks down Han and Luke, and after a trip to the bacta tank, Luke is pronounced out of danger. Just then, the same creatures which attacked him attack the base. At the same time, their scanners detect the presence of an Imperial Probe Droid - the meteorite Luke spotted earlier. Han and Chewbacca manage to destroy it, but not before it transmits its data to the Imperial fleet. The data is received by Darth Vader's massive new Star Destroyer, and though his officers aren't sure if the data points to Rebel activity, Vader is certain, and orders the fleet to the Hoth system at full speed.

Firsts and Other Notables
This issue begins the series' adaptation of The Empire Strikes Back, which will run for six issues (as with the adaptation of the original film), concluding with issue #44. Unlike the adaptation of A New Hope, which began before the film was released and was intended to help drum up buzz about the movie, this issue wasn't on sale until late June of 1980, over a month after the film was released into theaters, in order to protect the film's secrets (and because by 1980, Star Wars was a cultural phenomenon, Empire a highly-anticipated sequel that needed no help generating buzz).

A bunch of new stuff is, not surprisingly, introduced this issue: new, Hoth-based looks for Luke, Han and Leia, a new long-sleeved jacket for Han (mostly replacing his vest), the planet Hoth, Rebel officers Derlin and Rieekan (both unnamed), Imperial Captain Piett (unnamed) and Admiral Ozzel, as well as General Veers (mentioned but not seen), the creatures tauntauns and wampas, Imperial Probe droids, as well as the Rebel's Snowspeeders and the massive Super Star Destroyer, Darth Vader's flagship, which eclipses the previous Star Destroyers in size.

The issue opens with a splash page that almost functions as a second cover, showing the heroes posed in their Hoth gear, with Vader looming large behind them. The second page then features a variation on the opening crawl of the film, with Luke astride his tauntaun in one corner, leading into the full action on the third page. 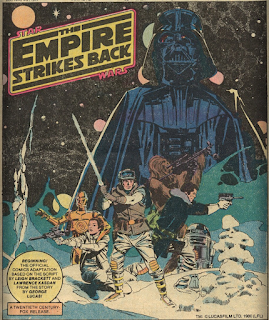 The cover to this issue, somewhat unfortunately, is the first of the series to feature one of the infamous yellow banner ads that muddy up the top third of numerous Marvel Comics covers around this time, including the seminal conclusion to the "Dark Phoenix Saga" over in X-Men (which was on sale at the same time as this issue).

Creator Central
Al Williamson & Carlos Garzon take over as the series' penciler & inker for the duration of the adaptation; previous regular artist Carmine Infantino will return with issue #45. A letter from the editor on the letters page speaks briefly about the adaptation process, and also explains how Williamson & Garzon don't work in the traditional penciler/inker tandem (with the two swapping roles sometimes from page to page, or even panel to panel). 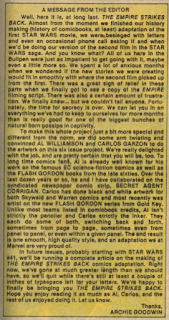 Jo Duffy, who will eventually write for this series, is credited this issue as an assistant editor on the book.

A Work in Progress
Since last issue and this one, the Rebels have relocated from their base on Yavin Four to one on the ice world of Hoth, dubbed Echo Base, which is still being setup, their equipment adapted to the cold, as the story begins.

Han's motivation to leave the Rebels at the start of the issue is prompted by an encounter with a bounty hunter on Ord Mantell, an event which has been chronicled a few different ways through the years. It also doesn't quite gel with the ending of the previous issue, which found Han motivated to return to the Rebels due to the resumption of the price on his head. 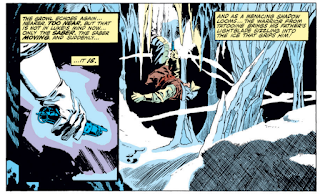 Um, Actually
As with Thomas & Chaykin in the adaptation of A New Hope, Goodwin and company were working off an earlier draft of Empire's screenplay than what ended up being film when crafting these issues, and a result a number of differences between the comic and the finished film exist. First and foremost, the opening crawl in this issue is different than that of the film (I believe the crawls are usually written very close to when the finished film is sent off to theaters, and thus, Goodwin would have no idea what is was when writing this issue). 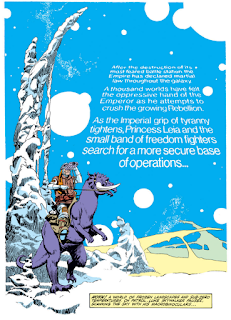 Something I never noticed before re-reading this issue now: Luke first appears watching a meteorite falling to the ground through his macrobinoculars, which might have been an attempt to echo the his intended first appearance in earlier drafts of A New Hope, in which he is first seen watching the space battle above Tatooine through his binoculars before rushing off to tell his friends in the Anchorhead deleted scene.

As such, where the film opens with shots of the probe droids being launched from Star Destroyers (presumably to echo the opening post-crawl shot of a looming Star Destroyer in the first film) and following one of them to Hoth, and Luke, here, the issue opens with Luke on Hoth, spotting the crashed droid in the distance (though this may have been a deliberate change made by Goodwin, to add to the impact of the Empire's arrival for the issue-ending cliffhanger.

Here, Han's discussion with leaving the Rebellion due to the price on his head, and being told a death mark is not an easy thing to live with, occurs between him and, presumably, Major Derlin (the unnamed-in-the-film Rebel officer somewhat famously played by John Ratzenberger aka Cliff Clavin), rather than with General Rieekan, as in the movie.

Han and Leia's subsequent argument is different than what appears in the film, much more inline with deleted scenes that appeared on the saga's Blu-ray release and thus, another reminder that Goodwin is working off an earlier draft of the script. 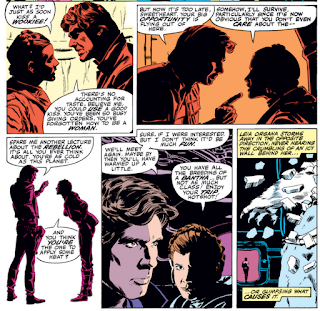 Unlike in the movie, Luke is motivated to use the Force to retrieve his lightsaber in the wampa cave by Obi-Wan's voice. His lightsaber is also referred to as a "lightblade" in this scene. 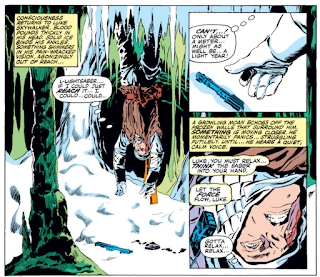 One of the big deleted scenes from Empire, on par with the Anchorhead/Biggs material from the first film, is the wampa attack on Echo Base, a series of segments in the opening act that found wampas attacking the Rebels, getting corralled into holding cell, and then Threepio helping unleash the wampas on unsuspecting Imperials during their attack on the base (the only thing which remains of the sequence in the finished film is the brief shot of snow falling on Artoo's head as he rolls down a corridor). In this issue, we briefly see the wampas attack inside the base, and Leia orders the surrounding caves to be scanned for more of them. 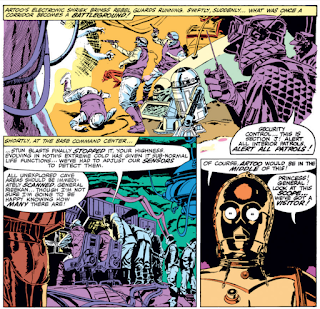 However, we never actually see the wampas, either in the base or the one that attacks Luke, presumably because Goodwin & Williamson weren't given any reference material for them by LucasFilm, nor are they referred to as wampas in the issue.

When Han rescues Luke, the sequence of him using Luke's lightsaber to cut open the dead tauntaun and stuff Luke inside (a scene which comprises one of my earliest film memories) is omitted.

The attack on the probe droid is more complicated here than in the movie; it first destroys a Rebel outpost, a snowspeeder is shown investigating it, and Chewbacca is used more deliberately as a decoy to lure it out in the open, where Han shoots its. 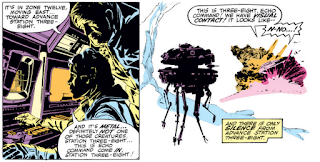 The Space-Lexicon
Attacked by a wampa, Luke declares "Son of a jumpin'" but is cut off before we find out what was jumping.

Han lists "gank killers" amongst the things Jabba is sending after him.

Austin's Analysis
One of the things I've always loved about Marvel's adaptation of Empire is that they did it as part of the ongoing series (rather than breaking it out as its own limited series, as they do with the Return of the Jedi adaptation). Reading it now, as part of a survey of the entire series, I appreciate it even more, as it helps make the events of the film read more like the continuation of the adventures of the main characters and of the series' overall narrative, as it should. But it does raise an unfortunate problem with the art. Al Williamson & Carlos Garzon's work is great: being more photorealistic it's certainly appropriate for the adaptation of the film (Luke, Han and Leia have never looked more like their movie counterparts in this series than this issue), and they certainly has the chops for Star Wars, as seen in the newspaper comic strip. But it still bugs me that they take over the series, just for the length of the adaptation, from Carmine Infantino.

Infantino is the book's regular artist, with more issues of the series under his belt than anyone else, and not only would it have been fun to see his more angular, traditionally comic book-y style interpret the events of the film, it also would have helped add to that feeling that Empire is just the latest adventure for the characters, the next story in the series. Had Infantino's run ended prior to the adaptation, the presence of Williamson & Garzon might feel different, but he'll return once Empire is done for a handful of issues more, reinforcing the unfortunate notion that he's good enough for the series, but not good enough for the high profile adaptation of the film sequel. Which is unfortunate, because it takes away from the effect elevated by having the story run as part of the regular, ongoing series. Williamson & Garzon's work is great, and I generally enjoy it here on its own merits, but it's still a shame that Infantino, the book's regular artist, wasn't allowed to continue the strong work he'd been doing, especially given the higher profile of this story.

Next Issue
The Empire fulfills its titular obligations on Hoth.