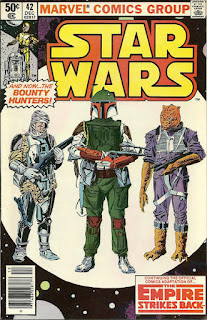 In a Nutshell
Luke trains on Dagobah, the Millennium Falcon heads to Bespin.

Plot
On Dagobah, Luke meets a small, gnome-like creature who promises to take him to Yoda, while hidden inside the asteroid field, Han & Leia grow closer as they repair the Falcon. Vader interrupts his search for the ship to meet with the Emperor, who warns him of the potential threat of Luke, to which Vader vows to turn the boy to the Dark Side, or kill him. On Dagobah, a frustrated Luke realizes his new friend is in fact Yoda himself, who is reluctant to train him, but Luke, with some assistance from Obi-Wan, prevails. Back in the asteroid field, Han realizes the cave they're hiding in is actually alive, and the Falcon races out just as the creature tries to eat the ship. On Dagobah, Luke's training commences, and though he makes great strides, he's unable to rescue his ship from the swamp, a task Yoda completes with ease. Meanwhile, Darth Vader is giving marching orders to a group of bounty hunters, including Boba Fett, tasked with locating the Millennium Falcon when the ship suddenly emerges from the asteroid field. But it disappears just as quickly, with Han buzzing one of the Star Destroyers then attaching to the side of it and shutting down the Falcon's systems. Believing the ship jumped to lightspeed, the Imperial fleet dumps its garbage just before it does the same, allowing the Falcon to float away unnoticed. Scanning nearby systems, Han sets a course for Bespin, home of an old friend of his, not realizing the Falcon is being followed by Boba Fett.

Firsts and Other Notables
This issue features the first appearance of the bounty hunters who debuted in Empire Strikes Back: Bossk, Dengar, 4-LOM, Zuckuss, IG-88 and, of course, Boba Fett (who technically debuted in the Star Wars Holiday Special). The group gets cover billing, as well as the opening splash page. 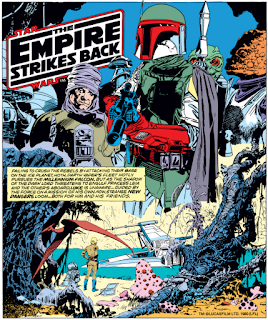 Additionally, Yoda makes his first full appearance in this issue, while the Emperor appears for the first time, though only in a shadowy transmission to Vader (as in the movie). Lando is mentioned by Han. 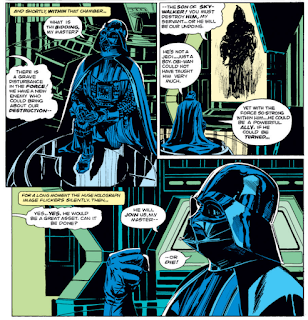 Boba Fett's ship, Slave I, appears for the first time, and is named.

The back of this issue includes the additional covers of this adaptation used in the UK, where the issues are shorter in terms of pages and shipped weekly (so more covers were needed for the same amount of pages). As a result, Lando makes his comic book debut here on one of the UK covers before appearing in the story. These covers also offer a glimpse at what Carmine Infantino's take on the events of the movie would have looked like. 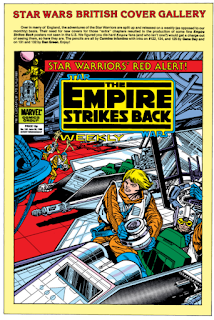 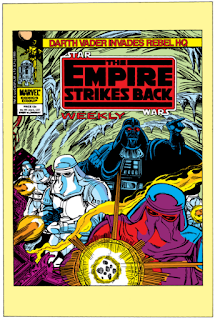 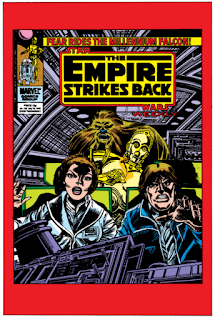 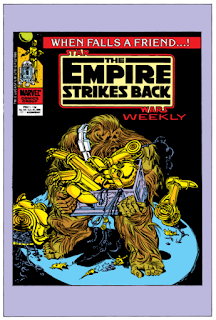 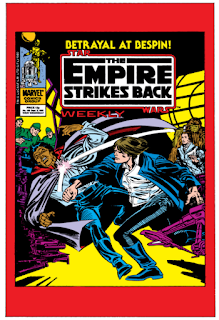 A Work in Progress
Luke appears in what Kenner dubbed his Bespin fatigues this issue. Presumably, this, rather than his Tatooine whites, will be his default look in the series going forward.

Han notes that Bespin is not far from where the Falcon is (presumably still in the general area of Hoth), which is good since, with the hyperdrive damaged, they can't travel there at lightspeed (presumably, the Falcon's sublight engines are still pretty fast, otherwise it'd be taking them centuries even to go from one system to another).

Um, Actually
Though Yoda's general appearance in this issue more closely matches the film than in other printings of this story (per Archie Goodwin's column in the previous issue), he is still off-model in some ways: his legs are longer and more spindly, and he's more fairy-like in terms of size, able to comfortably sit on Luke's shoulder instead of being carried around in a backpack. 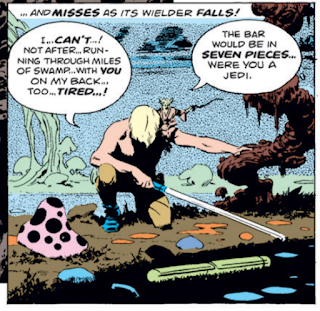 The Emperor refers to Luke as a new enemy, which is a line of dialogue from the film, though at this point in the series Vader is well aware of Luke and has crossed paths with him both indirectly and directly (No Prize explanation: the Emperor says he's a new enemy because he's in the midst of receiving Jedi training, and thus is a threat in a new kind of way).

We don't see the TIE Bombers in this issue; instead, the Star Destroyers are directly bombarding the asteroid field. 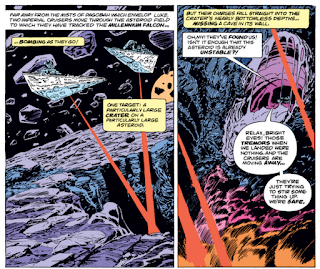 The Mynocks attack the Falcon as in the movie, but aren't shown. Ditto the space slug (we see its mouth "collapsing" and Han theorizes they were inside some kind of slug, but the creature never rises out of the asteroid).

Pink mushrooms are present on Dagobah, which doesn't quite fit the aesthetic of the place in the movie. 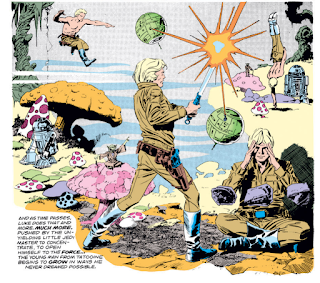 Boba Fett is much more chatty here than in the movie. 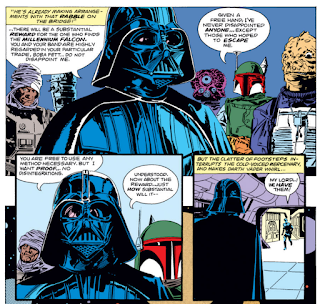 The scene in which Luke enters the cave steeped in the Dark Side and battles Darth Vader isn't in the comic.

Young Love
As in the film, Han and Leia share a kiss while hiding in the asteroid field, though Threepio doesn't interrupt them here. 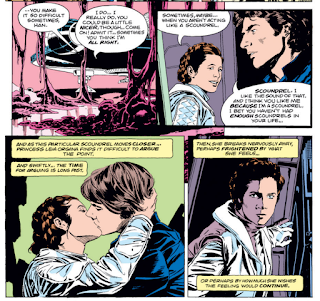 Austin's Analysis
This issue brings us beyond the halfway point of the six issue adaptation of Empire, and with only two issues left after it concludes, it's definitely a transitional issue, with the characters firmly away from Hoth and moving towards the third and final act of the story. As a result, it condenses A LOT of the movie's running time into this issue, almost the entirety of the film's second, less action-heavy, act. Both Han & Leia's budding romance and the entirety of Luke's training with Yoda (including Luke meeting Yoda, learning the truth about Yoda, being trained by Yoda, and getting schooled by Yoda when he fails to raise his X-wing from the swamp) are handled in this one issue. Of course, much of this is down to the difference in medium: what is a several-minutes-long training montage on film can be expressed in the comic via a single page of artwork and a few captions. Yoda pulling Luke's X-wing from the swamp unfolds over minutes, with the suspense building and the music swelling; here, it unfolds in a couple of panels.

Which isn't to say the comic is inferior. It's just a good illustration of how the same story is told differently depending on the means being used to tell it. In the movie, the second act is when the story slows down after the frenetic Battle of Hoth and before the action-heavy climax, when it takes a breath and focuses on character development while the plot slows down for a bit. Whereas the same sequence of events in the comic book is its most fast-paced yet, in terms of the amount of significant events and story covered: introducing three important characters to the larger Star Wars narrative (Yoda, the Emperor, and Boba Fett), setting up another (Lando), giving Luke more training in the ways of the Force than he received in the previous 41 issues of the comic, and essentially ending the Han/Leia/Luke love triangle. All of that, in a single issue.

Next Issue
Shenanigans on Bespin and the introduction of Lando.