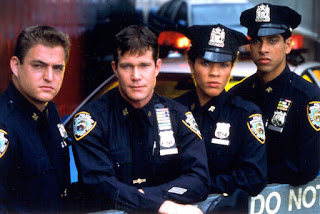 Brooklyn South, to its credit, did run for a full season.  That’s actually a decent run, when compared to other Milch programs (NYPD Blue’s twelve-year run was very much an outlier.)  The show, however, is pretty weak tea when compared to what most viewers expected from another Milch/Bochco cop drama.  The first season of NYPD Blue brought us a young lead in the midst of a divorce, an older lead crawling his way out of alcoholism, and various supporting players that ranged from a nice guy with a stutter to unrepentant adulterous scum.  Brooklyn South doesn’t give us a Sipowicz.  We don’t even get a Mike Roberts.


Which isn’t to say that the cast of Brooklyn South is without charm.  I like many of these characters, especially Dylan Walsh’s Officer Jimmy Doyle.  Walsh went on to co-star in shows like Nip/Tuck and Unforgettable, but Brooklyn South shows that Walsh could’ve worked as a series lead even back in 1997.  The problem is that Jimmy Doyle isn’t the lead on the show.  And neither is patrol sergeant Francis Donovan.  And desk sergeant Richard Santoro doesn’t exactly qualify for the role, either, even though he tends to be in the middle of most of the storylines.  Brooklyn South has no center; whereas Blue evolved into an ensemble program, South attempts to open as one.  The result is a show with far too many characters and too many story arcs, with no one character given a real chance to make a connection with the audience.  The show was often compared to Hill Street Blues in its early promotion, but even Hill Street had Captain Frank Furillo and public defender Joyce Davenport to serve as anchors for the series.  Brooklyn South desperately needed such an anchor, and the show even has a few regular cast members who could’ve filled that role.  Unfortunately, no single actor is given much of a chance to stand out, so you never get to know any of these characters the way you came to know John Kelly or Andy Sipowicz.

Another problem facing the series is that NYPD Blue had spent the previous four years giving viewers the impression that uniform cops just aren’t as interesting as detectives.  Uniforms are the guys with notepads already at the scene when the detectives arrive, but they rarely contribute anything to the investigations.  And I think every individual uniform given more than three lines on Blue at this point was painted as incompetent at best or corrupt at worst. (The only exception would be the Officer Shannon character, who inexplicably kept showing up for a long string of episodes.)  Brooklyn South comes from the opposing view -- we’re supposed to follow uniforms during the course of their day, and detectives are merely plot nuisances that must be dealt with. 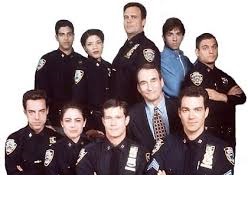 The problem is, South isn’t willing to pretend that patrolman and detective are interchangeable positions, so almost every episode of the show has to present some excuse for a uniform to do a detective’s job.  Sometimes this is a source of intentional humor (like when a detective jokes that he might as well allow Doyle and Roussakoff to bring in a suspect since they’ve been doing his job anyway), other times it’s a source of clunky plot mechanics.  I can see the bind the producers are in -- it’s not dramatically satisfying if the uniform cops are on the scene of a crime, but not directly participating in apprehending the perpetrator.  At the same time, it’s not realistic to have beat cops out there investigating murders (and one of the co-creators of this show, a retired homicide detective, isn’t likely to bend on this), so the show has to justify why the uniforms are getting involved.  By the end of the first season, the series still hasn’t figured out how to resolve the conflict.

Another conflict exists between Milch’s storytelling instincts and CBS’s expectations of what a drama should be.  In 1995, CBS began an effort to revamp its image and aim for a much younger demographic.  (Remember MTV’s sketch comedy program The State?  In '95, new episodes were going to air on CBS opposite Saturday Night Live.  Plans fell through after only one Halloween special, but it’s an indication of just how “young” CBS was reaching.)  By 1997, CBS was still under the delusion that they could pull this shift off, so having their own NYPD Blue by the actual creators of that series made sense.  In practice, CBS couldn’t seem to commit, so after a pilot that strongly evoked NYPD Blue, the show quickly descended into relatively safe family entertainment.  Conflicts are resolved by the end of episodes, bickering ethnic groups always seem to find peace with one another, and dark secrets revealed by the cops are forgiven almost instantly and never turn out to be all that dark in the first place. 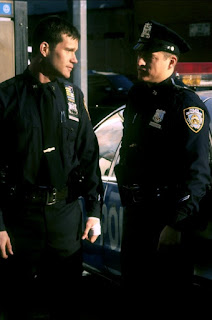 I doubt this is the show Milch set out to make, and when Blue’s audience didn’t follow over from ABC, the network began to panic.  The biggest shift occurs in the later episodes, when the character of Terry Doyle, Jimmy’s younger brother who’s reluctantly gone straight from the police academy to undercover work, disappears from the show.  He’s replaced by Officer Ray MacElwaine, described by Wiki as “a middle-aged widower and 24-year veteran of the force.”  MacElwaine is Jimmy Doyle’s new partner, and even though it’s implied that he’s half-crazy in his initial appearance, he evolves into a fantastic supporting player.  You might remember the actor portraying MacElwaine from the two separate roles he’s already had on NYPD Blue -- John Finn played both Jimmy 'Socks' Matloe, Sipowicz’s childhood friend who commits a murder, and Internal Affairs villain Lt. John Shannon.   Later, in Milch’s final season, he plays another character named Jimmy McElroy.  He’s clearly someone Milch respects as an actor.  (Finn also played Sheriff John Witter on Dawson's Creek, in addition to various cop roles on shows like The Practice.)

Just to drive the point home, this actor was replaced… 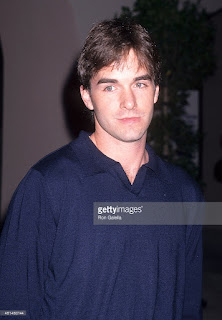 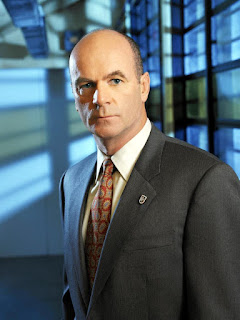 …in an effort to bring in new viewers.  Is this the moment CBS fully embraced its reputation as a grandma network?

Season Highlights
I would nominate the pilot and “Skell in a Cell” as the two best episodes of the series.  “Skell in a Cell” is the penultimate episode of the series, featuring the saintly Jimmy Doyle in the uncomfortable position of lying to his superiors in order to protect a fellow cop.  It’s much closer to what I’d expect from a David Milch cop show than most of the episodes that preceded it.  I’m assuming that either CBS relented and allowed Milch to follow his instincts as their final effort to save the series, or Milch just decided to do what he felt like anyway since the show was likely doomed.

Season Lowlights
“Clown without Pity,” along with any of the other episodes that push the angle of humor or absurdity, just don’t click.  Humor often doesn’t work out so great on NYPD Blue either, but at least Blue already had a solid cast that the audience cared about before it attempted the sillier stories. 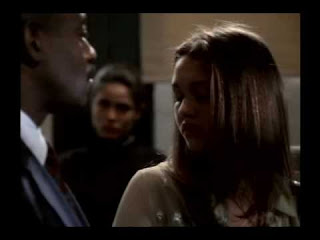 Hey, Isn't That...?
Almost every episode of this series features an actor you’ll recognize…Ray McKinnon, who later appears on Deadwood as the camp’s minister, is an abusive husband in “A Reverend Runs Through It”…Danny Trejo appears as a hired thug towards the end of the season…a teenage Jessica Alba is featured in one episode, as the victim of a flasher…AJ Langer, in one of her first roles following My So-Called Life, is a frequent guest star, playing Jimmy Doyle’s younger sister…Christopher Meloni portrays an overconfident thug, very similar to the Jimmy Liery character he played a year earlier on NYPD Blue… Mos Def appears as a street informant (or is he an undercover cop?)…and Bryan Cranston is in a few episodes, as an Internal Affairs Lieutenant with a bizarre obsession with outing closeted police officers.

Next Time:  I examine the final Jimmy Smits episodes of NYPD Blue, try to remember anything about Rick Schroder’s character, and reveal which cast member of this show should’ve been brought over to NYPD Blue.