Game of Thrones 6x06: Blood of My Blood 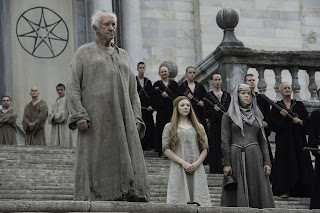 Way The Hell Up North
Bran and Meera are running away from the ice zombie horde that were momentarily inconvenienced by Hodor's (presumed?) sacrifice. While Meera is doing her best to save their asses Bran is busy hallucinating the past. We get our first glimpse of the the Mad King, a dragon, a Ned beheading, white walkers and, of course, Bran falling from that Winterfell tower. I'm glad Bran is picking up the slack and being a dick to himself!

So Meera's trying to run from ice zombies whilst carrying Bran and it's going about as well as you'd expect. Just when all hope seems lost they're saved by a mysterious stranger. The stranger doesn't stay mysterious for long because if you're talking about a mystery man north of the Wall we all know it's going to be Benjen Stark. And it is! But he's looking a little...frosty.

Apparently Benjen got “infected” by the white walkers. The Children of the forest saved him so now he's some kind of half-breed, daywalker or whatever. I dunno, but hopefully he has super powers!

On The Road
Sam's dad's a dick. That's not really a surprise. I was mildly surprised to find out the rest of his family seemed OK.

Sam planned on leaving Gilly and young Sam with his family but Sam's father, Randyll, starts insulting Sam so Gilly defends him by talking about how heroic he was when they traveled down to the Wall. Yup...down.

Even I saw that as a mistake and Randyll sure didn't miss it. He hates Wildings and he handles finding out Gilly is a Wildling about how you'd expect. Actually, it goes a little better than I'd expect. He still agrees to take care of young Sam and is willing to turn Gilly into a servant. I mean, that's no good, but I'm just surprised he didn't kill her right there.

So, after Randyll figures out Gilly is a Wildling and says terrible things, Randyll points to his ancestor’s Valyrian steel sword (one of the few weaknesses White Walkers have), Heartsbane, and says Sam will never wield it. We know where this is headed.

Sam decides that he obviously can't leave Gilly and young Sam with his father so he takes them with him as he leaves. Oh yeah, he also takes Heartsbane, of course.

Braavos
Arya is checking out that Westeros play. It's now deep into Game of Thrones Season 4. Arya sneaks backstage but is caught because, duh, you're a random person backstage where actors are milling about. You think they wouldn't notice her?

Anyway, the actress marked for death, Lady Crane, seems cool with Arya. After lot of teasing, Lady Crane finally goes to drink her poisoned rum for real. Arya saves her and accuses another actress of trying to kill Lady Crane.

Jaqen is none too pleased that Arya didn't do her job. That servant woman at the House of the Black and White is more than happy to hunt Arya down and kill her. But Arya is wise to it. She's busy uncovering Needle. It looks like we'll find out what happens when you bring a stick to a sword fight.

King's Landing
Tommen is concerned about Maergary. The High Sparrow allows him to go to her. She seems to be in high spirits and appears to now be liking the High Sparrow.

The Walk of Shame is getting close and the Tyrell army is ready to stop it. With Jaime Lannister at the forefront, the army confronts the Sparrows with the intention of getting Maegary and Loras back. Unfortunately, it's all unnecessary. It appears Maergary has atoned enough and no walk is needed. She's (supposedly) a convert. You know who else is a new convert? Tommen.

So, because of Jaime's attempted coup, he is stripped of being in the Kingsguard and is sent to the Twins to help Walder Frey take back Riverrun from Blackfish. We also see Walder Frey at the Twins but I think the only point of that scene was to remind the viewers that Walder Frey is an ass and the Blackfish was supposed be killed but escaped.

Well, that and remind us that Walder has Edmure Tully as is willing to leverage him.

Vaes Dothrak
Daenerys is traveling with her Dothraki to Meereen. She asks Daario how many ships she'll need to get to Westeros. He says 1,000. Hmmm...I feel like someone else just mentioned building 1,000 ships an episode ago.

Drogon the Dragon returns and Daenerys is soon riding him. She makes a rousing speech to the Dothraki asking them to follow her to Westeros to reclaim the Iron Throne. They all seemed pretty jazzed but, then again, I know I wouldn't be vocalizing a dissenting opinion to a person riding a giant, fire-breathing dragon.

Other Thoughts
One odd thing about Daenerys's speech was that I'm confused why it was necessary. The Dothraki already seemed pretty on board with Daenerys beforehand.

I'm also curious to see how Daenerys is going to react to the news that slavery has been reinstated.

On an unrelated note, another thing that bothered me about Hodor's holding of the door is that all agency of his sacrifice was taken from him. He didn't have a choice but to hold the door. Bran just callously sacrificed Hodor and it's seemingly going unacknowledged.

Do we know for sure that other actress was the one behind the planned death of Lady Crane?

So what is Sam planning on doing with Gilly and Young Sam now?

I'm curious about the relationship between Randyll and his wife.

I assume Maergary is just playing the game and not really a convert, right? At least, I hope so.

I also assume Tommen is a convert.

I was surprised by how front and center Jaime was in the confrontation with the High Sparrow. I figured the Lannisters would hide in the background and claim they had nothing to do with it if things went south.

I'm curious what, if anything, that is happening in the play Arya is watching is legitimate news to her.

I should note that I've been very busy lately and haven't been good about replying to comments. I hope to get better at that but, rest assured, they're greatly appreciated!

Daenerys: Will you kill my enemies in their iron suits and tear down their stone houses? Will you give me the Seven Kingdoms, the gift Khal Drogo promised me, before the Mother of Mountains? Are you with me, now and always?

Season 5 Totals
Boob Count: 10 (No nudity this time.)
Full Frontal Count: 4
Butt Count: 4
Coitus Count: 0 (Has nobody have sex on this season yet? I find it hard to believe!)
Main Character Death Count: 10 (I'll say Hodor is dead, so the count is 10. No major deaths this time!)
Hodor Count: 30
Newer Post Older Post Home
Posted by Dr. Bitz at 8:24 PM