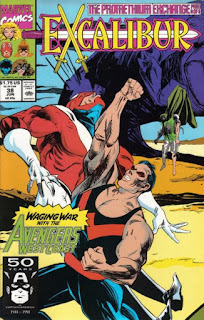 In a Nutshell
The West Coast Avengers join the fight against Dr. Doom in Limbo.

Plot
In Limbo, Excalibur is attacked by the demonic simulacrums of various superheroes, while back on Earth, the Avengers West Coast are greeted by Alistair Stuart outside Excalibur's lighthouse. The Lady of the Lake explains that Doom intends to destroy Limbo in order to gain its promethium, at which point England will be sucked into Limbo through five portals scattered throughout the country. She then teleports the Avengers into Limbo. Excalibur and the Avengers split into five teams, intending to destroy the portals then rendezvous at Doom's castle. They manage to close the portals, but are unable to stop Doom, observed by the demon Darkoth, from plunging the Soulsword into the heart of Limbo, transforming all of its native inhabitants into promethium.

Firsts and Other Notables
Differentiating it from Immortus' timeless Limbo (where Space Phantoms and Dire Wraiths go), Dr. Doom refers to Limbo as "Otherplace", which is, I think, the first use of that term to describe Belasco's/Illyana's Limbo. I find it hard to believe Scott Lobdell coined that term in a fill-in run and it stuck, but I can't recall it being used prior to this issue, and the internet is being less than helpful in confirming if this is it's first usage. If anyone knows either way, sound off in the comments.

Darkoth, an old Fantastic Four villain with ties to Dr. Doom, pops up in Limbo in this issue, and will continue on into the next. 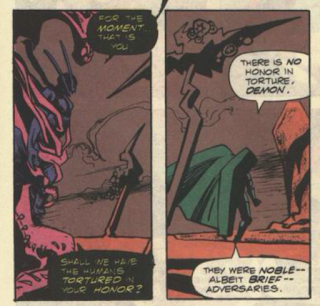 Quicksilver is amongst the Avengers appearing this issue, notable simply because in a few months he'll become a regular fixture of the X-books in X-Factor. He also displays some legitimately funny snark.

A Work in Progress
As has been the case in the past, it's noted that Limbo changes to reflect its current ruler, which accounts for the demons taking the form of Marvel Universe characters.

Nightcrawler and Scarlet Witch speak German together (reasonably accurately, though a lot of Scarlet Witch's words are misspelled and at one point she says "that tastes good" when I think she means "that would please me". Also "doppelganger" is hardly a word whose usage would make me think the speaker knows German). 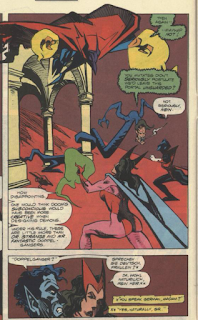 The Reference Section
Captain Britain seems to think that Wonder Man is a Superman knock-off. 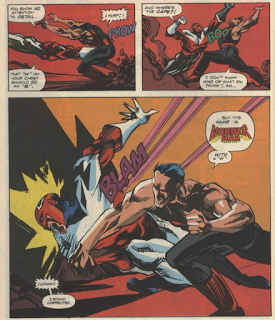 Teebore's Take
As mentioned in the review of She-Hulk #26, Excalibur in this era seems to be the de facto X-team of choice when it comes to guest appearances in other titles. For similar reasons, it is also the rare X-book at this time to routinely host non-X-related guest stars in its pages: Dr. Strange in #30, the Outlaws in #36, and now the Avengers West Coast. Outside the merits of the individual stories, these guest appearances at the very least help shore up the idea of Excalibur as a legitimate superhero team, and not just a collection of assorted X-Men castoffs (even if the appearances, as in the case of the Avengers here, are pretty random). For a series desperately in need of an identity, "token guest star vehicle" maybe isn't the greatest identity, but it's an identity.

As for this issue, it works as an effective team-up issue, doing the usual misunderstanding fight before breaking the two teams up into pairs (shades of New Warriors Annual #1), and there's some fun in seeing Quicksilver, on the verge of getting drafted more tightly into the X-universe, interacting with Excalibur as an Avenger. Granted, the art is still not very good. Some of the more Sienkiewiczian surrealism works better here than in the previous issue, with more of it set in Limbo, but for the most part, it's a mess, with hard-to-follow storytelling that isn't helped by the quality of the paper at this time (which is, I believe, still better than the average comic, but the art doesn't hold up as well on it). Lobdell's story continues to work as an innocuous team-up featuring a classic Marvel baddie, but the art also continues to drag it down.

Next Issue
Tomorrow, Wolverine fights Robo-Wolverine in Wolverine #40. Next week, Uncanny X-Men #278 and the conclusion of this story in Excalibur #39.
Newer Post Older Post Home
Posted by Austin Gorton at 12:00 PM