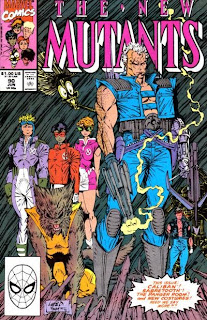 In a Nutshell
The New Mutants get a new headquarters and new costumes.

Plot
In the Morlock Tunnels, Sabretooth attacks a Morlock named Samson, drawing the attention of Caliban. Meanwhile, Cable leads the New Mutants to their new base of operations: the subbasement of the destroyed X-Mansion. Leading them inside, Cable orders the kids to design their own curriculum and new costumes, then report to the Danger Room for a training session. Roberto also cautions everyone to stay clear of the Morlock Tunnels, as Jean Grey recently told them the remaining followers of Masque have grown dangerously insane. As Caliban comes across the body of Samson, the New Mutants work on their costume designs, and Boom-Boom asks Rictor why he's been such a pain since Cable arrived. He admits that he knows Cable, but that it's personal and he doesn't want to talk about it. Later, the New Mutants gather in the Danger Room, and during the exercise, Rictor is overwhelmed by his opponents. 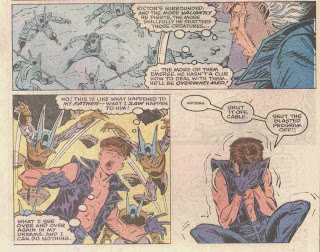 Reminded of what happened to his father, he collapses, begging Cable to turn off the simulation. Insisting Cable ran that specific sequence to set him up, then runs off, thinking that he'll prove himself by clearing the Morlock tunnels of Masque and his followers. Later, Boom-Boom, Sam and Roberto are trying on their new costumes when Rahne rushes in, declaring that Rictor has gone into the tunnels. They alert Cable, who tells them to be at the tunnel entrance in five minutes so they can get him back. In the tunnels, Rictor is caught between Sabretooth and Caliban, with Sabretooth slashing Rictor's stomach then turning to face Caliban. At the X-Mansion, Cable tells the New Mutants that while they are probably too young to experience what lies in the tunnels, Rictor has a better chance of survival if they all work together, and proceeds to lead the team into the tunnels.

Firsts and Other Notables
The New Mutants debut their new, Liefeld-designed costumes in this issue, and for the most part, they're pretty solid, a nice mix of individualized and uniformed elements (and definitely a step up from the rather blah Blevins-designed costumes). Most won't survive the transistion to X-Force, though this is the look Sam will sport pretty much entirely until Greg Capullo redesigns all the X-Force costumes post-"X-Cutioner's Song". The New Mutants also adopt the subbasement of the X-Mansion as their new base of operations in this issue, which will be the team's final locale before they become X-Force. 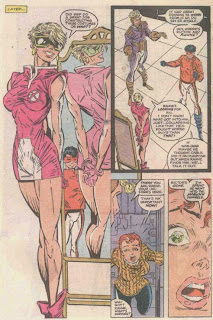 The Chronology Corner
This story takes place after Uncanny X-Men #264. Cable references a conversation with Cyclops in which Cyclops suggested the New Mutants using the old subbasement to keep Freedom Force off their trail (which is clearly a hand-waving attempt to justify getting the New Mutants out of Ship and in their own locale); as far as I know, that conversation happened entirely off panel.

A Work in Progress
The group of Morlocks Masque is leading (the contemporaneous antagonists in Uncanny X-Men) are referred to as "Masque's gangsters", suggesting there now exists different factions within the surviving Morlocks (though given how many surviving Morlocks have popped up in all three titles of late, it's enough to wonder if the Marauders killed any of them...).

The Sabretooth/Caliban confrontation, first setup in X-Factor #52 & 53, spills over into this issue and the next. 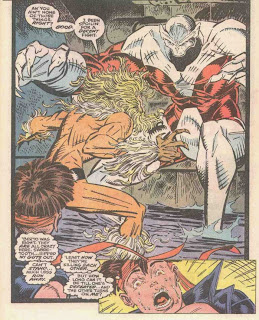 Cable suggests Freedom Force is being backed by one specific individual with a nefarious agenda; unless he means Val Cooper, I don't think anything ever comes of this cryptic remark.

Enough time has passed between last issue and the next that Rictor's mohawk is gone.

We get a ton of cryptic hints about Rictor's past with Cable in this issue: Rictor admits that Cable isn't some kind of mass murderer but says Cable stole his father from him and when Rictor is overwhelmed in the Danger Room by opponents, he compares it to what Cable did to his father. 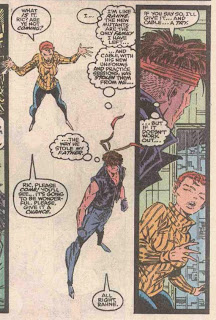 Cable tries to repair Cerebro in this issue to locate the MLF, confirming some version of Cerebro still exists at the mansion. 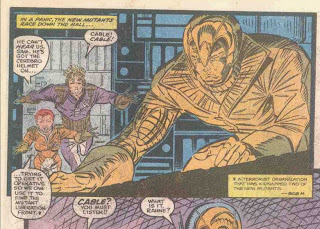 The Grim 'n' Gritty 90s
Sam adds a pair of goggles to his costume, admitting that, while he doesn't need them, they just look cool. 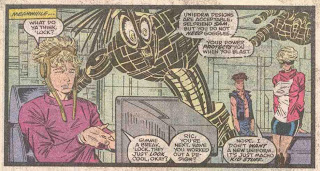 The New Mutants use "modem" as a verb, to describe how they're sending their costume designs to Ship. 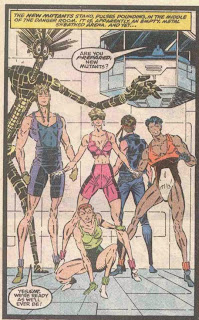 The Reference Section
Ships that look suspiciously like Imperial TIE fighters attack the New Mutants in the Danger Room. 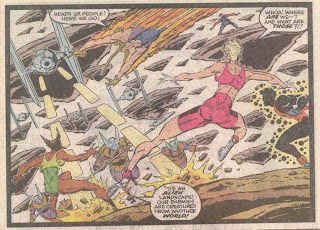 The Cable Guy
This issue begins Liefeld's somewhat annoying tendency to never draw Cable in the same attire in consecutive issues. Early in the issue, he sports a new armored look as the New Mutant tour the remnants of the X-Mansion, and then later he sports the look seen on the cover as they prepare to go into the tunnels to rescue Rictor. 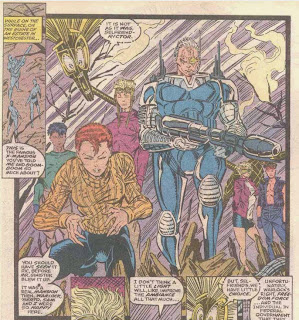 Cable worries that if he doesn't handle Rictor correctly, he'll lose him like he lost his son. This is one of a few Cryptic Cable Comments that still makes some sense in retrospect, as it will eventually be established that Cable has a son; however, he loses that son when Stryfe brainwashes him, which doesn't really compare to what's happening to Rictor in this issue.

They're Students, Not Superheroes
Cable tells the New Mutants that despite his more aggressive mission, they still need to keep up their studies, to better understand the world they're trying to save, and charges each with designing their own curriculum to that end. He also orders them to design new costumes, as new looks may momentarily confuse Freedom Force when next they meet. 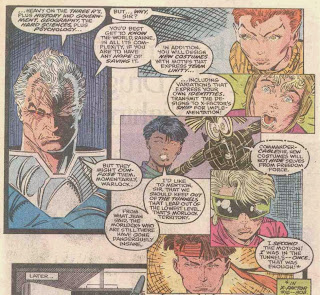 501 Genes
I don't know what the spikey rubble on the cover is supposed to be, but it sure does a bang up job of obscuring everyone's feet...

Squinty Face Liefeld is on display all throughout this issue.

Rather than draw someone explaining all the amenities of the Mansion subbasement, or, you know, draw the amenities themselves, Liefeld just drops in a picture from the Official Marvel Handbook. I love the Handbook more than most, but that just seems lazy. 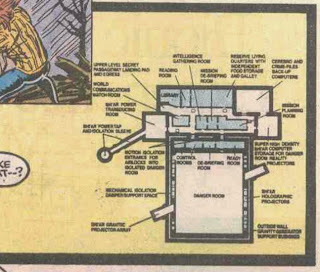 Cable's gun, which is comically large regardless, changes shape and proportions between the second to last and last pages of the issue.

The final page of this issue is effectively a pin-up shot of the team. 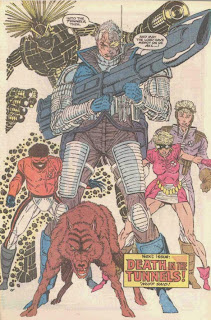 Rob Liefeld on designing new uniforms
"The first thing I asked Bob when I got on the book was if I could redesign Sunspot's costume, because his was the only costume I really didn't like. But then I said, why not just take the whole group and revamp them? I sent in various designs for all the characters, and the ones we settled on had more of a uniform look. ... I've bought several magazines and borrowed some of my sister's magazines, trying to think what kind of accessories would they put on themselves. ... If the New Mutants are in the Savage Land and it's too hot, I'm to have the sleeves and the lower pant legs zipped off. If they're in the Antarctic, I'm debating having windbreaker hoods come up out of their collars. With Boom-Boom I laugh: this is what Madonna was wearing in 1983. Her hair's going to change. I'm thinking about ditching the bow in her hair. I like the glasses she wears. She has attitude, she likes to convey attitude, so I'm going to show that in what she's wearing. They'll all look like teenagers of the 90s."

Teebore's Take
After three issues that introduced Cable and brought him into proximity with the team, this issue essentially sets up the new Cable-led status quo for the series: a new base of operations (which, yes, is technically at least part of their old base of operations), new costumes, and new conflicts, both internal (Rictor vs. Cable) and external (the New Mutants vs. the Morlocks). Much of the issue is turned over to Rictor's angst about Cable, something which (mostly) fits with the later reveal but is still nonetheless irritating in its vagueness at this point: while a case can be made for Cable's "don't push it" attitude when it comes to grilling Rictor for details on just why he doesn't like him, there's no reason, given what we later learn Rictor's beef with Cable to be, that Rictor doesn't tell his teammates why being around Cable bugs him so much, other than mystery for the sake of mystery on the part of the creators.

The other problem with this setup is that it, ultimately, doesn't lead to much. After next issue (which is really just the conclusion to this issue's setup), we get a fill-in set mostly in the past, then a two-parter that genuinely features this new team dynamic before a crossover takes over for three months. By the time that's done, the transition into X-Force begins in earnest. So this is an issue setting up a new status quo that effectively lasts for all of three issues' worth of story (in the main series, at least). There's some promising material here, both in Cable's approach to the team and their reactions (Rictor's and otherwise) to him, but most of it gets pushed aside by the crossover and the push towards X-Force, the end result being that it's hard to get too excited about this new direction, promising though it may be.

Next Issue
Tomorrow, an old friend and an old foe return in X-Factor #55. Next week, Spotlight on the Starjammers #1-2 and Excalibur #23.