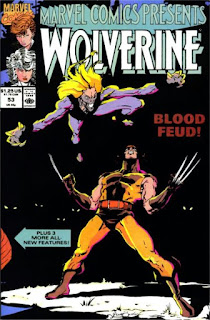 In a Nutshell
Wolverine battles Wildchild

Plot
Issue #51: Leaving a bar, Wolverine is attacked by Wild Child, leading both Wolverine and Heather Hudson to believe that Wild Child is responsible for a recent rash of serial killings. Wolverine, after remembering a previous training session with Wild Child, vows to track him down. Issue #52: Wolverine stakes out Wild Child's apartment, and watches as Heather Hudson enters the building. Inside, she's attacked by Wild Child, who rips through the circuitry of her suit. Wolverine crashes into the room, and spotting Heather's condition, realizes Wild Child is not a man to be saved but an animal to be put down. The two fight, but Wild Child retreats, knowing Wolverine will opt to save Heather rather than pursue him. 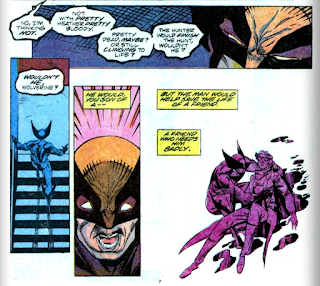 After Wolverine gets Heather to a hospital, he resumes the hunt for Wild Child. Issue #53: Wolverine tracks Wild Child for eleven days, finally confronting him in the forests of the Yukon. As they fight, Wolverine wants to know why he attacked Heather, and Wild Child insists that he had to, then declares that Wolverine will either have to kill him or let him go, as he won't go to jail. The two end up facing off atop a log spanning a deep chasm with a river at the bottom, and the log ends up falling into the river, taking the two men with it. Later, Wolverine climbs out of the river, knowing he's lost Wild Child, the choice of killing him or sparing him taken out of his hands.

Firsts and Other Notables
The antagonist of this story is Wild Child (or Wildchild, if you prefer), an Alpha Flight villain who at this point in time is pretty much like Sabretooth in terms of powers and temperament. He eventually is cured of his mental illnesses by Department H, pardoned, and made a member of Alpha Flight as Weapon Omega. After "Age of Apocalypse", in which an alternate version of Wild Child is shown to be a member of the X-Men, he will join the government-sponsored iteration of X-Factor and be a regular part of that series nearly to the end of its initial run.

Rob Liefeld, an avowed fan of Wolverine, writes and draws all three issues of this story. He's joined by Fabian Nicieza, his future New Mutants/X-Force co-writer, as scripter, starting with issue #52.

The letter column in this issue teases the upcoming Barry Windsor-Smith-drawn "Weapon X" serial, the first significant effort to tell a tale set in Wolverine's past, though that story doesn't start for another twenty-odd issues.

The Chronology Corner
Wolverine's appearance in this story occurs prior to Uncanny X-Men #246 and Wolverine #17.

A Work in Progress
As issue #51 opens, Wolverine is in disguise as Patch.

A flashback to Wolverine's time with the early Alpha Flight affords Liefeld an opportunity to draw Wolverine in his original yellow and blue costume. 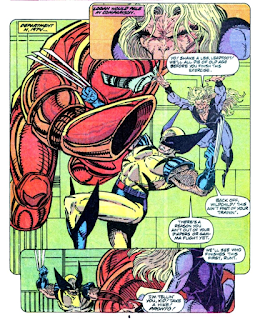 In issue #52, Wolverine notes that Heather Hudson still believes him to be dead, as of X-Men #227, something he thinks he should rectify (also, maybe tell Mariko?).

The Grim 'n' Gritty 90s
Wolverine, drunk as issue #51 begins, makes a point of not driving in his inebriated state.

The Best There is at What He Does
This story features another old friend from Wolverine's past we've never seen before nor will again (we really need to come up with a catchy, shorter name for this type of character), an emergency room doctor named Giloski who helps patch up Heather but keeps Wolverine's involvement to himself.

501 Genes
Not that Liefeld is the only artist with this problem, but Wolverine's claws on the final page of issue #51 look to be coming out at the wrong angle and are shaped such that they probably couldn't reside in his forearms and come out the top of his hands. 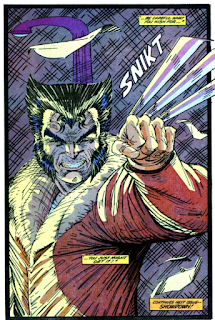 Teebore's Take
A relic from a time when Rob Liefeld was still enough of an up-and-comer that he'd do inventory stories, the appeal here is seeing him devote an issue's worth of pages to one his favorite characters, the end result being something of a perfect storm of early 90s kewlness, one of the half-decade's biggest artists drawing one of its biggest characters. Liefeld actually shows a surprising amount of knowledge about Wolverine and Alpha Flight history (though a kick internet check tells me this story is something of a nightmare to place within Alpha Flight continuity) working in references to both Wolverine's past with Heather Hudson & Alpha Flight as well as Wild Child's past history with the same.

The central narrative is fairly routine/repetitious, a series of fights between Wolverine and Wild Child, with both issues #51 and #52 ending as Wolverine declares his intentions to hunt down Wild Child and a lot of the standard material in which Wolverine's inner monologue contrasts himself with his more feral, uninhibited opponent. And the open-ended resolution, with neither character emerging a winner and Wolverine let off the hook from deciding whether or not to kill Wild Child, smacks of Liefeld trying to make A Deep Statement. But as with the Erik Larsen Spider-Man/Wolverine story in the previous three issues, the brevity of this story helps smooth over the repetition of the narrative and the somewhat pompous ending. Little more than a curious relic of its era, then, but short enough in its telling to not be overly tedious.