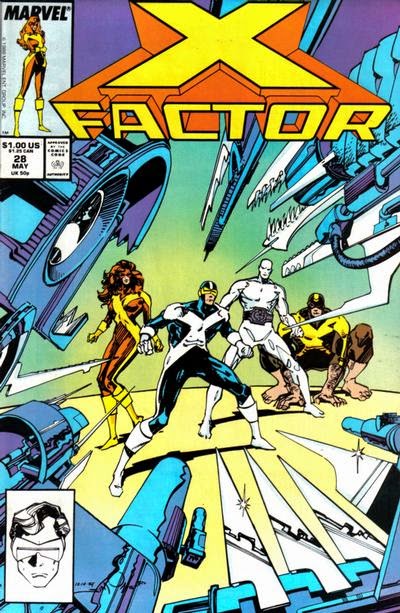 Plot
On the Hudson River, Apocalypse's ship suddenly smashes into a tugboat. Inside the ship, X-Factor's wards feel the impact, but then then the floor suddenly opens up beneath them. Marvel Girl and Iceman, meanwhile, race outside the ship to investigate the impact, with Iceman freezing Beast's feet in place to ensure he doesn't risk his remaining intelligence helping them. Outside, they rescue the crew of the tugboat, but are then attacked by the ship. At the airport, waiting to fly out in search of his son, Scott hears a news report on the melee, and rushes back to help. Inside the ship, the kids are dropped into individual cells, but Artie bounces free. After Boom-Boom frees everyone else, they follow Artie's mental pictures deeper into the ship. Outside, Marvel Girl and Iceman are about to be overwhelmed when Beast breaks free and intervenes, followed by the arrival of Cyclops. 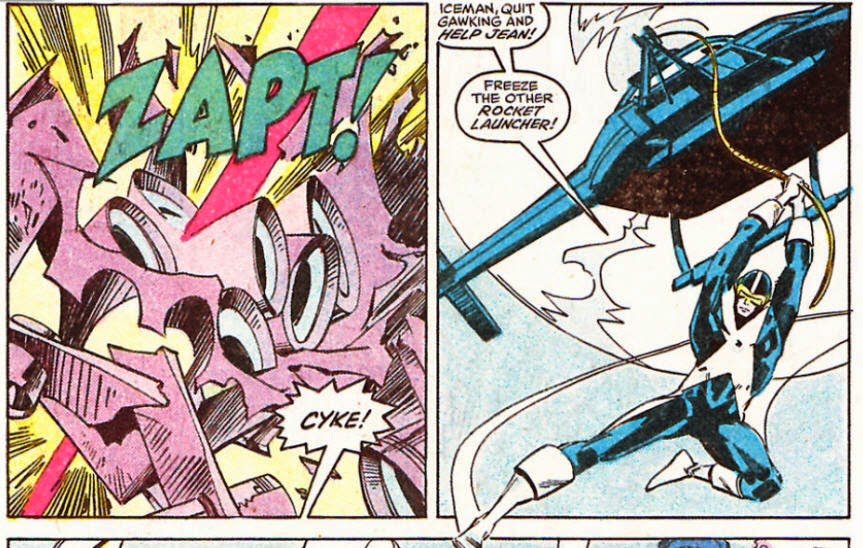 Elsewhere in Manhattan, Angel arrives at Candy Southern's apartment. He finds it deserted along with evidence that Candy has been kidnapped. Back inside the ship, the kids, led by Artie, unlock the ship's brain, allowing it to communicate with them, but also triggering a countdown set by Apocalypse. The ship directs X-Factor in locating and removing the bomb Apocalypse set, which they do just as time is about to expire. As X-Factor reunites with the kids, Ship pledges his loyalty to them and offers to be their home. Outside, Cyclops speaks to the gathered media, explaining that they've neutralized the threat from the ship left behind by Apocalypse. Watching from afar, Apocalypse concedes to Caliban that X-Factor has won this hand, but not the game, and tells Caliban his transformation is about to begin. At a Manhattan bar, a young woman watches the press conference. As a man says he wishes he had powers, she invites him back to her place, saying he can tell her all about the kind of power he wants, while she'll tell him why she needs X-Factor's adorable ship.

Firsts and Other Notables
This issue reveals that Apocalypse's ship contains an artifical intelligence , which Apocalypse had enslaved and kept subdued while in control of the vessel. Freed by the X-Factor kids and dubbed simply Ship, this A.I. will become a recurring character in the book for as long as X-Factor uses the ship as a headquarters. Eventually, it will be revealed that Ship evolves into the Professor, the similarly-sentient computer program which operates Cable's Graymalkin space station, and after that, into Prosh, a techno-organic being containing Ship's mind, who plays a role in the X-Men Forever miniseries. 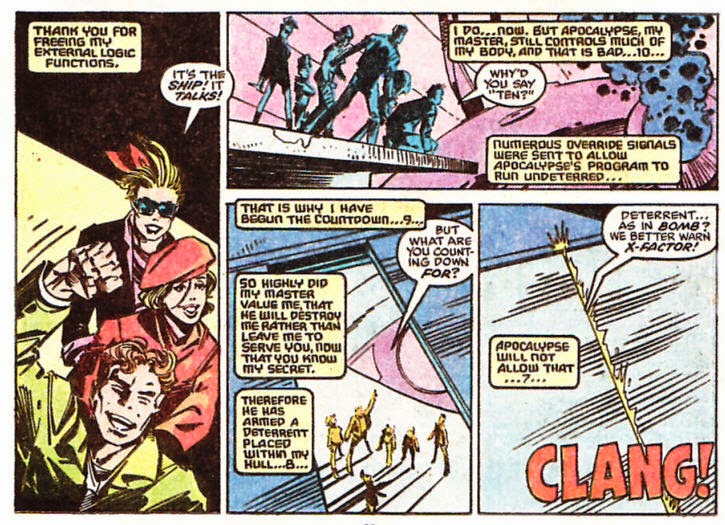 As a result, this is the issue in which X-Factor more or less formally adopts Apocalypse's ship (henceforth to be referred to as Ship) as their new headquarters, having been staying theew the last several issues, as mentioned in this issue, simply because they had no place else to go.

Dark Angel has begun trying to track down Candy Southern (last seen storming out of the hospital after seeing Warren and Jean embracing in issue #12); here, he arrives at her apartment, and finds evidence suggesting she's been kidnapped, then chooses to continue his hunt for her rather than help X-Factor against Apocalypse's ship. 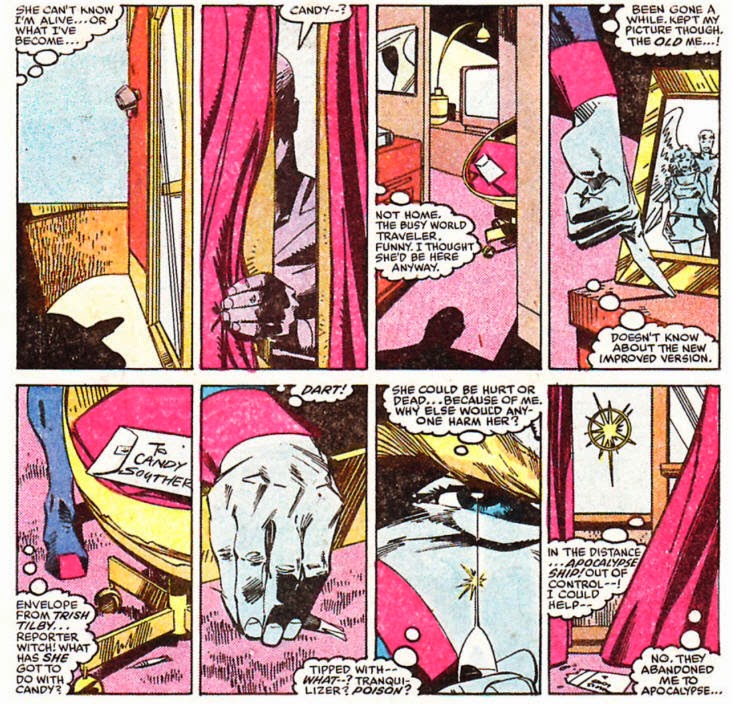 Though unnamed, Infectia, who will serve as the villain of the next story, makes a brief first appearance in the closing panels of this issue. More on her next issue. 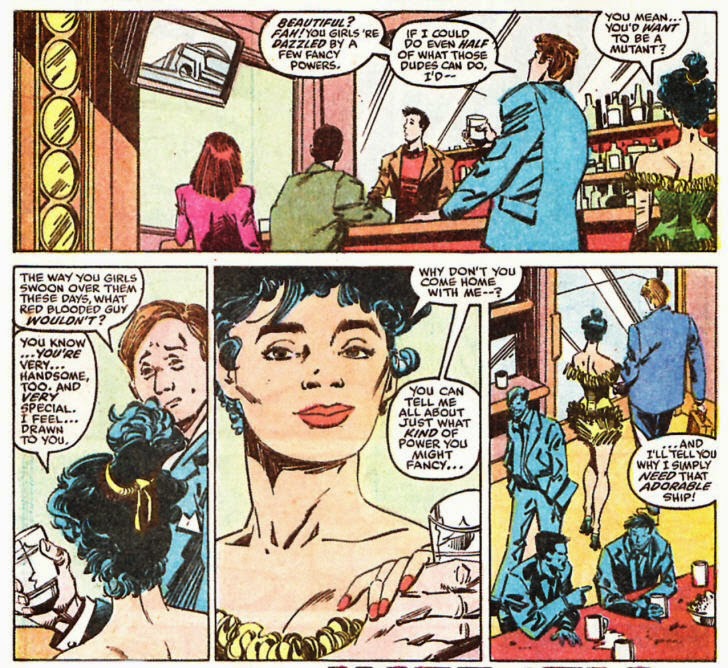 Louise and Walt Simonson share the plot credit for the first time this issue.

The Statement of Ownership in this issue lists the average number of copies of each issue sold during the preceding 12 months as 568,382, with the single issue nearest to the filing date selling 554,164, putting the sales of this title ahead of New Mutants.

A Work in Progress
In search of his son, Scott tries to head to Dallas, where a newscaster reports that a freak blizzard (as seen in Incredible Hulk #340 and Uncanny X-Men #225) has trapped Freedom Force there (Scott's idea being that he'll start his search with the last place Maddy was seen alive and the last people to see her). However, this doesn't gel with Captain America #339, which showed Freedom Force already back in DC and referencing the death of the X-Men at a time prior to the events of this issue.

Apocalypse is disappointed that the booby traps he left on his ship didn't destroy X-Factor, but he nonetheless considers them worthy to continue using. 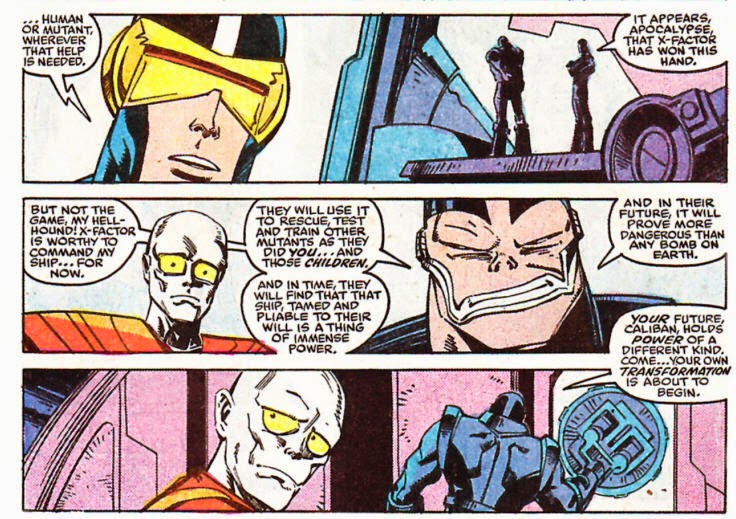 Teebore's Take
This issue is mostly concerned with turning Apocalypse's ship into X-Factor's ship, revealing, in the process, that inside the ship is, well, Ship. As another step in the establishment of X-Factor's new status quo, that's all well and good (and for being an intelligence housed inside a massive alien space ship, Ship will go on to have a surprisingly long life in the X-Universe), but in execution, the end result is an issue where X-Factor fights a lot of nondescript booby traps and sci-fi guns and whatnot, which is at this point all fairly routine.

The kids are mostly used well here again, though, getting captured at first but easily escaping under their own power and then helping unlock Ship's consciousness. It's nice to have them function as something more than just hostages, and to contribute to X-Factor's success without outright saving the day. Other than that, there's not much to this. It's an acceptable (and arguably necessary) step in the creation of X-Factor's new role as public heroes, but it's hard to get too excited about on its own terms.