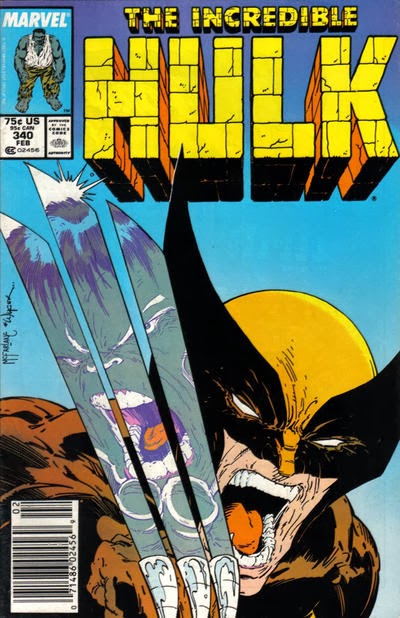 In a Nutshell
Wolverine vs. the Hulk

Plot
The X-Men arrive in Dallas just as a restless Hulk leaps into the air. Forced to avoid their plane, Hulk accidentally crashes into a commercial jet, prompting the X-Men to help it land safely. Investigating the damaged plane, Wolverine recognizes Hulk's scent. Shortly thereafter, Hulk is confronted by the National Guard, triggering a fire which threatens a nearby apartment building. As the X-Men help evacuate the building, Wolverine runs afoul of Hulk. Though he accidentally cuts Hulk with his claws, Wolverine apologizes and tries to leave, more concerned with helping the X-Men then fighting, but an angry Hulk attacks Wolverine. 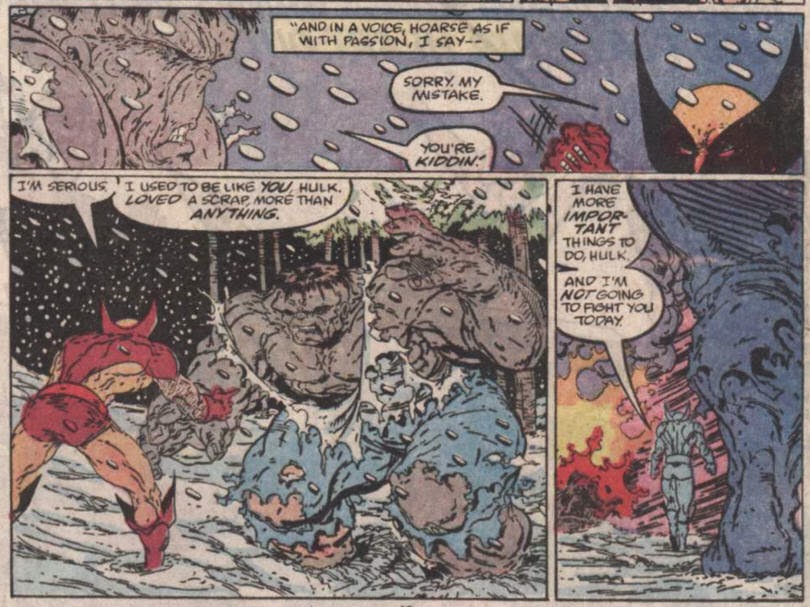 Though Wolverine does his best to stay in control, he eventually relents, cutting loose against Hulk with an animalistic fury. However, as fast as Wolverine cuts him, the wounds heal, and their battle drags on until it's interrupted by Hulk's traveling companions Clay Quartermain and Rick Jones. Quartermain admonishes the pair for the senseless fight, asking if they really don't have anything better to do. Wolverine, angry at himself for losing control, says that he does, and leaves to rejoin the X-Men.

The X-Men guest star in this issue, arriving in Dallas where Uncanny X-Men #225 will pick up, though aside from Wolverine, they mostly disappear after the first few pages, and Maddie is nowhere to be seen (despite being offered up as the X-Men's pilot in Uncanny X-Men #224, it is Rogue and Wolverine who are flying the Blackbird in this issue). 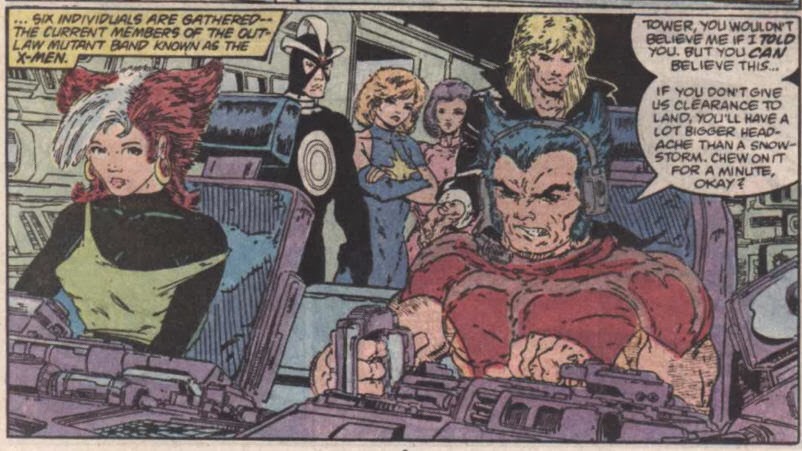 The Hulk featured in this issue is the second iteration of the "Gray Hulk" (the character was originally colored gray, not green, in his earliest appearances), a condition which finds Bruce Banner transforming into Hulk at night, during which Hulk is relatively intelligent and his personality is more crass and cruel. Shortly after this issue, Hulk will begin working in Vegas as a bouncer under the name Joe Fixit.

I Love the 80s
This being a Peter David comic written in 1987 and set in Dallas, a Dallas joke is made. 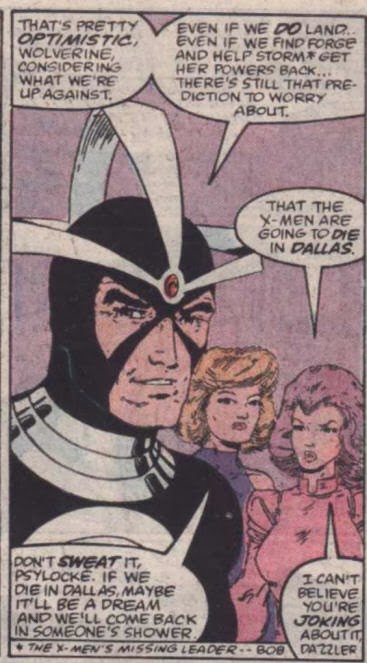 The Hulk's blood is colored green throughout the issue, though in this case, that could just be a Hulk thing and not a standards thing. 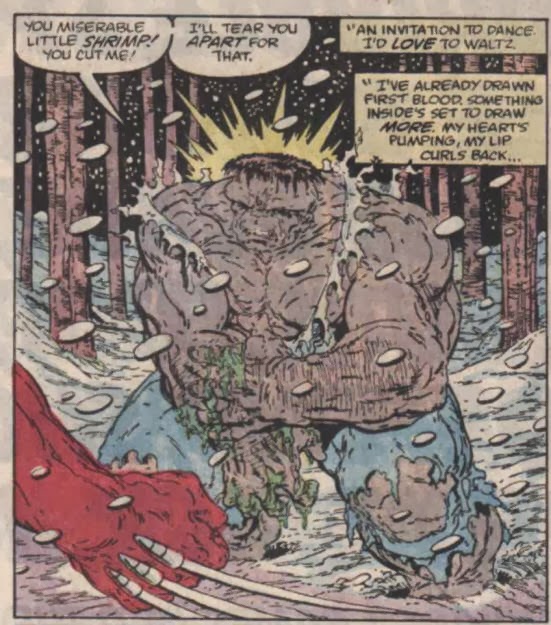 Artistic Achievements
This is something of an iconic cover these days.

The Best There is at What He Does
A technique that isn't used as often as it could be, Hulk uses Wolverine's enhanced senses against him during their fight. 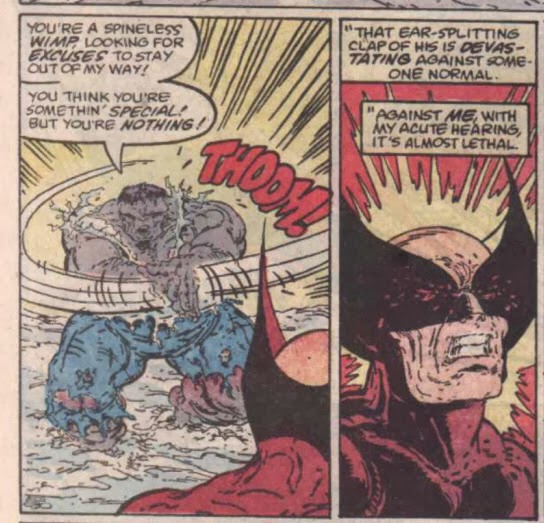 Goaded into a berserker attack by Hulk, Wolverine laments that he's not as good at controlling himself as he thought. 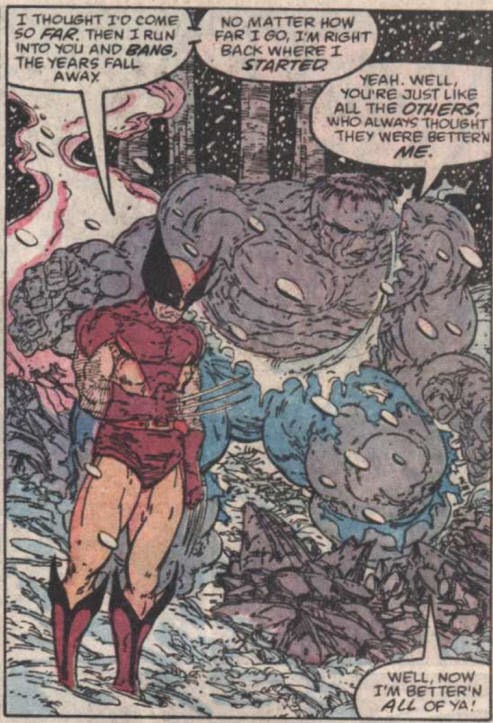 Teebore's Take
Todd McFarlane drawing a Hulk vs. Wolverine battle that reprises Wolverine's first appearance? In the early 90s, that was one formula for back issue gold, and for years, this issue had a ridiculously high price tag on it. I can still picture the cover staring down at me from high on the wall, where the priciest back issues were kept, at one of the comic shops I frequented. The lure of a McFarlane-drawn Hulk/Wolverine fight never had as much pull on me as other "wall books" like, say, the first appearance of Gambit or the Wolverine/Sabretooth-centric issues of "Mutant Massacre", but I was always curious about this issue nonetheless. Certainly, nothing about the story inside is actually worth the high prices it was going for back in the days of the speculator boom, but then again, what issue was? But this is probably better than it has any business being.

Somewhat curiously (given that this is a Hulk comic at a time when the title character was actually capable of having an inner monologue), the story is mostly told from Wolverine's perspective, with narrative captions written in his voice a la the Claremont/Miller limited series. As a result, it touches briefly on Wolverine's struggles as leader of the X-Men, specifically the need to balance the good of the team with his personal desire to cut loose in a fight (something really only referenced once before, in Uncanny X-Men #221), as well as his ongoing struggle to control the animal inside of him in the face of the Hulk's taunts and raw power. Nothing here is essential reading (I certainly never missed it all those years reading "Fall of the Mutants" without it), and the actual Hulk/Wolverine fight is no paragon of action choreography, but it's a fair sight better than the average Wolverine guest appearance, spending some actual time inside his head, exploring his character, however minimally. A novelty issue, but one with at least a modicum of substance.

Next Issue
Tomorrow, X-Factor faces off against Hodge in X-Factor #23. Next week, "Fall of the Mutants" begins in Uncanny X-Men #225 and New Mutants #59.
Newer Post Older Post Home
Posted by Austin Gorton at 12:00 PM