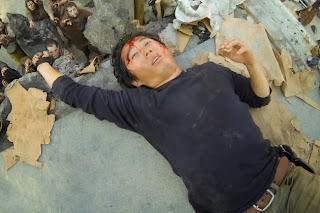 So, that was an episode that happened. That statement actually isn't an indictment of this episode but rather an expression of frustration from a reviewer after watching an episode that left very little to be discussed. (Aside from giving an ending that will have comic book readers talking.)

This episode just gave us an overview of what the rest of the group is doing. Daryl is with Beth. Unfortunately, Daryl is a bit down in the dumps and isn't his usual awesome Daryl self. That is a bummer. Maggie, Sasha and Bob are searching for Glenn. Meanwhile, Glenn has made an alliance out of necessity with mopey, guilt-ridden Tara. They're all wandering with no clear direction.

Probably the most interesting part of the episode was Tyreese and the kids. I throw the around the term sociopath a lot (especially with this show) but Lizzie is murdering bunnies for the fun of it and trying to smother babies to keep them quiet. Ummmm...honest-to-goodness sociopath? You know this isn't going to end well.

Meanwhile, Carol is back. Yay? Alright, I’m not the biggest Carol fan but it will be interesting to see how her interactions with a yet-to-be-clued-in Tyreese will go, especially if members of the group who are in the know show up. I just hope no one gets the sniffles around her.

Their part of the story ends with them heading towards the safe haven ominously named Terminus. This new town is an intriguing development and a good goal for the Tyreese’s group and the larger group in general to pursue. However, there is a good chance that when the characters reach Terminus all will not be what they hoped for and we’ll have the rug pulled out from under us yet again.

Overall, this was a maintenance episode. It checked in on the rest of the non-Carl/Rick/Michonne group and let us know where every was at. (At last I think it was the rest of them, I can’t keep track of every character these days.) This episode did its job while giving us some suitably exciting zombie fighting action. So, while this won’t go on The Walking Dead’s greatest hits list nor did it have a lot of substance it was enjoyable. Just like a bag of Doritos.

Other Thoughts:
In the comments of last week’s episode’s review I tried to keep open the idea that the group had an emergency rendezvous point. This episode made it clear that they did not. That is disappointing.

Is it just me, or did Judith really grow the past half-a-day?

Carl’s crying did little for me last week and Beth’s crying this week was equally unimpressive. Perhaps they should stop having their younger actors cry? But that’s kind of tough to do story wise in the zombie apocalypse.

Seriously, Lizzie scares the hell out of me.

I am curious to know why Carol was heading back to the prison. Perhaps she wasn't planning on taking the exile lying down?

So Maggie wanted to check out the zombies in the bus. I get it. They even had a plan (that predictably failed) to kill them safely. But, before opening the door, why not kill the ones sticking their heads out of the window? It’s the little things like that where this shows really fails.

Speaking of the bus, we’ll never find out but I’m curious as to how everybody on the bus got zombified.

When Glenn left the prison in riot gear, why was he carrying an assault rifle he didn't intend to use instead of some sort of handheld zombie killing weapon?

So Tara's sister apparently died? Was that made clear in the mid-season finale and am I just forgetting it? I remember her shooting the Governor. I don't remember her getting eaten afterwards. I feel like there's a lot I'm forgetting from the end of that episode.

I’ll obviously keep my thoughts on the ending to myself. But was it just me or did the three characters almost look too comic book-y for this show?
Newer Post Older Post Home
Posted by Dr. Bitz at 1:29 PM