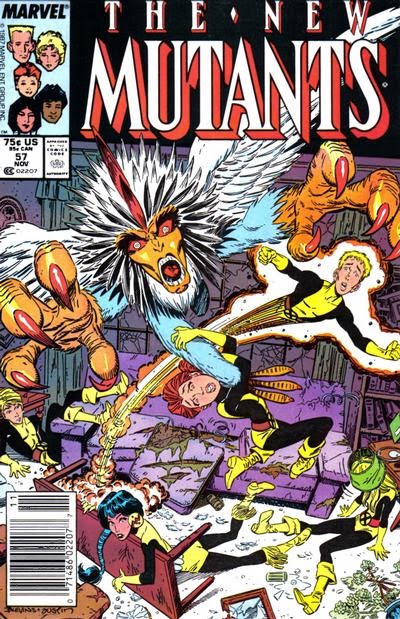 In a Nutshell
The New Mutants try to communicate with Bird Boy.

Plot
As Magneto shepherds the protesting New Mutants into the Danger Room, he's stunned to discover Bird Boy living inside. Freaked out by the disappearing environment, the New Mutants quickly attempt to calm down the creature. Rahne asks Doug to try and talk to him, but Doug insists he's not speaking a language. Magneto runs some tests and determines Bird Boy is neither mutant nor human, then sends the New Mutants back to their midterm studies. Later, the New Mutants gather to say goodbye to Amara as she leaves for the Massachusetts Academy, assuring her they'll still remain friends. In order to cheer themselves up, they decide to skip studying and sneak out to the mall for burgers and a movie. Rahne insists they bring along Bird Boy, and after disguising him with some old clothes, Illyana teleports the group to the mall. However, Bird Boy, egged on by Illyana, goes nuts over the food at the malt shoppe, causing a scene. 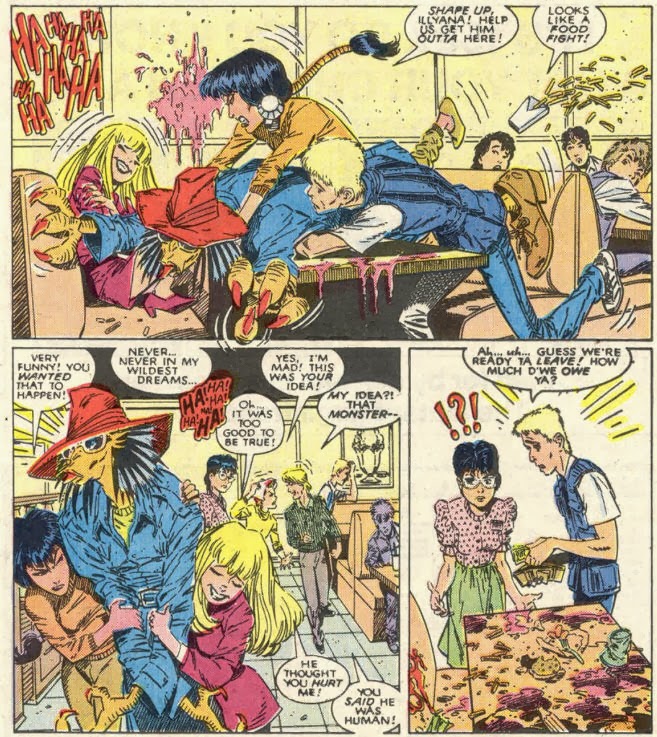 Quickly rushing him out of the restaurant, the New Mutants go to a movie, but when they enter the theater, Bird Boy causes another scene when a burger ad appears on the screen. As Dani uses her power to convince the audience they're seeing a sneak preview of a new 3D movie, Sam flies into the air to corral Bird Boy before Illyana takes everyone home. They arrive back at the mansion to find Magneto waiting, having been contacted by the malt shoppe owner. Upset at their irresponsibility, he declares that Bird Boy will be turned over to the authorities. A despondent Rahne insists that Bird Boy is human, and Doug finally agrees to try and communicate with him, which he's able to do successfully. Certain Magneto will let Bird Boy stay now, Rahne joyfully thanks Doug and tells Dani and Illyana they've finally gotten what they wanted: another boy at the school.

Firsts and Other Notables
Amara officially leaves the team this issue, transferring to the Massachusetts Academy. White Queen floats the idea that perhaps some of her students would be happier at Xavier's, but as we've discussed, unfortunately nothing ultimately comes from this interesting idea. Amara will pop up again in this series for a pair of fill-in issues, but after that she largely disappears into the limbo of unused and forgotten X-characters, making occassional but irregular appearances from time to time. As such, this effectively marks the last of her regular appearances in an X-title for many, many years. 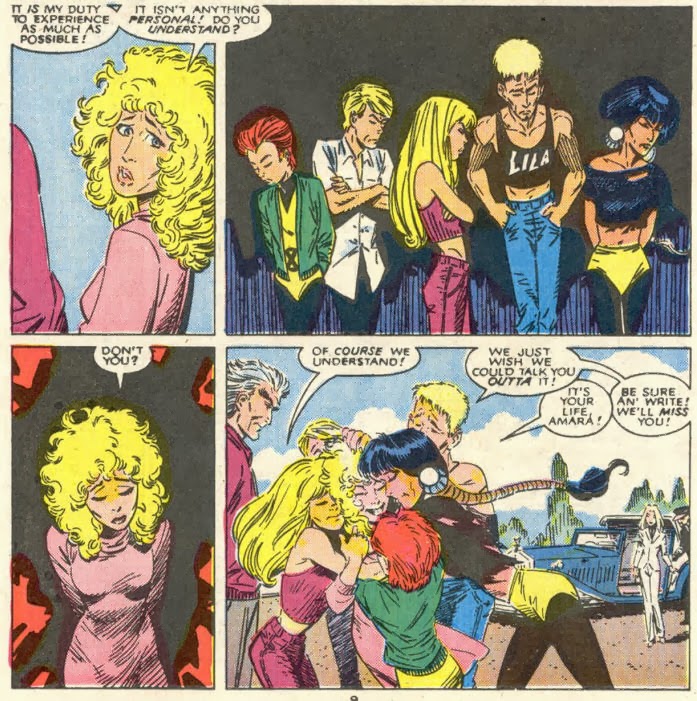 Bird Boy is given the name "Bird-Brain" by Doug. Though he means it derisively, it sticks, and becomes something of the creature's code name (it's the name he's cataloged under in the Marvel Handbook). With Doug able to communicate with Bird Boy and thus assuring his continued presence at the school, we can also consider this the issue in which Bird Boy "joins" the New Mutants.

Though on sale at the same time as Uncanny X-Men #222 and X-Factor #21, this issue continues New Mutants' odd trend of being published with next month's cover date. As a result, it runs next month's Bullpen Bulletins page, announcing the departure of Jim Shooter from Marvel and Tom DeFalco's promotion to Editor-in-Chief (a credit he receives in this issue).

A Work in Progress
Magneto notes that Cerebro remains damaged, but is able to use its "analyzer" to determine that Bird Boy is neither human nor mutant (via a printout on 80s-riffic paper).

Later, after Doug establishes communication with him, its revealed that "people" made Bird Boy somehow. 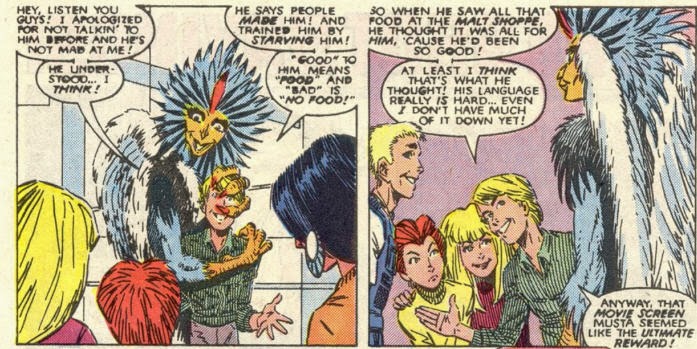 Magneto, learning the New Mutants snuck out to the mall with Bird Boy and damaged the Malt Shoppe, orders that the creature be turned over to the authorities.

Once Doug starts talking to him however, the New Mutants are confidant Magneto won't send Bird Boy away, and the running gag about Dani and Illyana wanting more boys at the school gets its punchline.

I Love the 80s
The New Mutants take Bird Boy to see House II, a movie that was heavily advertised in Marvel Comics around this time; my only familiarity with it comes from those selfsame ads. 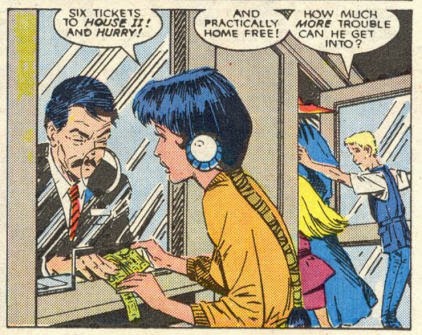 In the movie, they see an ad for McBurgers, Simonson's oh-so-clever McDonalds stand-in; it'll pop up again next issue.

Young Love
Doug spends most of this issue sulking because Rahne is giving Bird Boy attention, before Rahne rightly (if somewhat more nicely) points out that Doug is an idiot for being jealous of a giant squawking bird man.

Teebore's Take
And here we go with Bird-Brain...

This issue is filled with more "Squawk-AWKS!" than you could imagine (probably as many, if not more, than the number of times we're told to know mutants by their deeds in X-Factor #20, and frankly, I'd take that mantra over all the squawks in this one), and as annoying as the sight and sound is of a giant bird constantly shrieking and cramming his face with food while we're meant, like Rahne, to find it all terribly amusing and adorable, the greater sin is just how out of character the New Mutants and Magneto are in this issue. Magneto has already changed from the firm but caring mentor he was under Claremont (someone who battled the Avengers in order to save his students from the White Queen) to the stern taskmaster he'll be under Simonson - that he's upset the New Mutants stupidly took Bird-Brain into town is understandable; that he's also willing to hand over the creature to the authorities, mutant or not, seems wildly out-of-character. I'd believe that from Professor X before I'd believe it from Magneto.

More egregious are the New Mutants themselves. The goal here is whacky antics (whether said antics succeed in amusing is debatable), as the New Mutants "hilariously" take Bird-Brain to the malt shoppe and a movie, but in order to get there, nearly all semblance of character is thrown out the window. I can buy that Illyana would go along with the idea, just for the sake of being mischievous (as when she taunts Bird-Brain into having a fit at the malt shoppe), or that Rahne would be so certain of Bird-Brain's innate goodness that she sees no problem with taking him out into public, but Dani and Sam, who have always been portrayed as relatively level-headed leaders, have no objections whatsoever to throwing a trenchcoat and sunglasses on a giant bird wanting by the authorities and taking him to the mall? Really? These are the kids who fought a mystical demon bear, defeated the star destroyingly-powerful Magus, and helped save Asgard from the machinations of Loki? Reduced to squabbling over milkshakes?

There is defensible, even laudable material in Simonson's New Mutants run, but it's tough to defend this particular storyline. Yes, the kids are arguably acting more like typical teenagers, sneaking out to the mall rather than studying, than the level-headed young adults of Claremont's run, but as Simonson has admitted she did, this is an example of her taking that mandate too far, sacrificing character for the sake of gags that aren't that funny and action that isn't exciting. The punchline at the end is genuinely amusing, though. Unfortunately, that the joke works means Bird-Brain is sticking around for awhile...