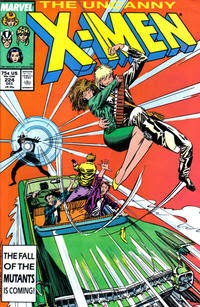 In a Nutshell
Storm reaches Forge as the X-Men set out in search of Storm.

Plot
In the Rockies, Storm and Naze reach the base of Forge's mountain aerie, and Naze sends Storm up the mountain to defeat Forge, saying Forge's enchantments would be geared to detect Naze. In San Fransisco, Val Cooper holds a press conference alongside Freedom Force at the hospital damaged in the fight between the X-Men and the Marauders, announcing Freedom Force's mandate to capture the X-Men. Nearby, Rogue is visited at a gym by a disguised Mystique, who warns her about Destiny's vision of the death of the X-Men should they go to Dallas, but Rogue insists on staying with her friends. As Dazzler performs at a local club, Longshot and Havok leave a movie and encounter a mugging gone bad. As Longshot rescues a woman taken captive by the thugs, Havok melts their car as the police, including Lt. Morrell, arrive on the scene. 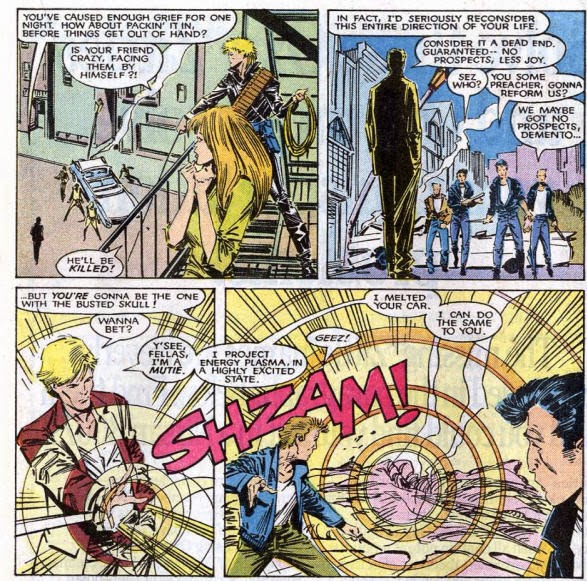 Morrell thanks Havok for his help, and warns him about Freedom Force. On Alcatraz, the X-Men gather and discuss Destiny's vision. With Destiny saying Storm is the key to it all, Wolverine proposes tracking her down, starting in Dallas. The rest of the X-Men, including Madelyne, agree to accompany him despite the danger. Meanwhile, as Storm climbs Forge's mountain, she's attacked by demons until suddenly, she's at the top and face-to-face with Forge. Without hesitation, she plunges her knife into Forge, who collapses in her arms, telling her he wasn't trying to destroy the world, but to save it. He then pushes them off the mountain, their souls entering the portal he was trying to close just as Naze destroys the mountain from below. With the two people capable of stopping him gone, he declares the world his, for as long as it lasts.

Firsts and Other Notables
The Mutant Registration Act, which requires all mutants to register with the government, is confirmed to be law in this issue (there has been some confusion on the matter, with X-Men #188 suggesting the act had already been signed into law while X-Factor #1 suggested it was still in the proposal stage). The act will be referenced occasionally in future issues and even in titles like Daredevil and Captain America. Eventually, a Superhuman Registration Act (which would extend the Mutant Registration Act to all super-powered individuals, not just mutants) will be proposed circa "Acts of Vengeance", though that will eventually be shot down, in large part due to testimony against it by Mr. Fantastic. 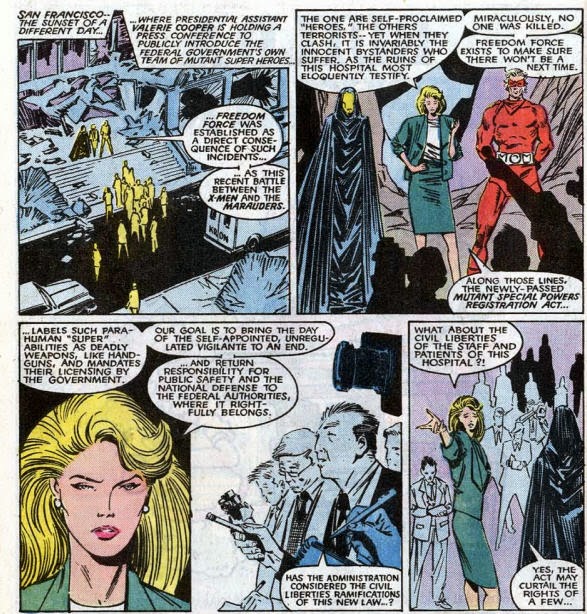 As far as I know, the Mutant Registration Act is another one of those things that gets lost in the shuffle of Claremont's departure, and is never formally rescinded or mentioned after he leaves the book, including when another superhuman registration act is passed and used as the kick off of Marvel's 2006 event series Civil War, which even features Mr. Fantastic as a staunch supporter of registration despite having argued against a similar law earlier.

As part of a contest to promote "Fall of the Mutants", this issue (and the other X-books on sale this month) come with a post card that can be filled out with the name and abilities of a mutant and sent to Marvel (or returned to a local comic book shop and then sent to Marvel) for "registration", in compliance with the Mutant Registration Act. According to the contest rules, from amongst the submissions Marvel will select the character they like best to appear in a future issue of New Mutants (in actuality, the winning character, Alchemy, will appear in issues #41 & #42 of X-Factor).

X-Factor inker Bob Wiacek fills in on this issue.

A Work in Progress
Via Naze's exposition to Storm, we get some sense of the Adversary's motivations. 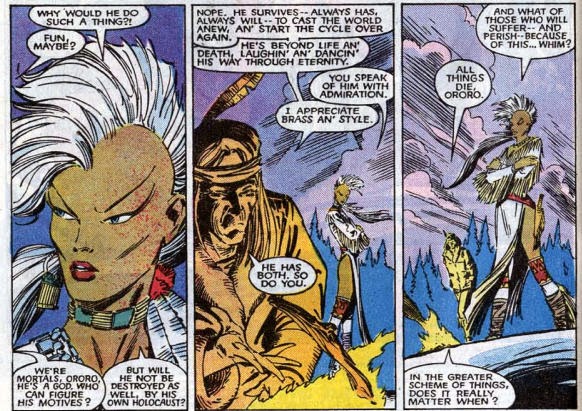 For those who care about such things, this issue establishes that Rogue is at least capable of lifting around fifty tons, using some weight lifting equipment designed for the Fantastic Four's Thing.

Professor Xavier's inability to help Rogue control her power such that she can touch other people is noted by Mystique. 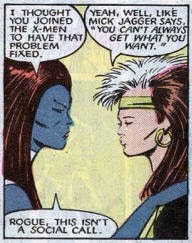 Havok and Longshot see Raiders of the Lost Temple, the movie for which Longshot did stunt work in the second issue of his limited series (the cover of which is the movie poster Longshot leaps over) and was the title of the Kulan Gath story in issue #191.  He even notes that one of the stuntmen has the same name as him (something which a distracted Havok ignores), not realizing he did the work due to the memory wipe he received from Mojo between the end of his series and X-Men Annual #10. 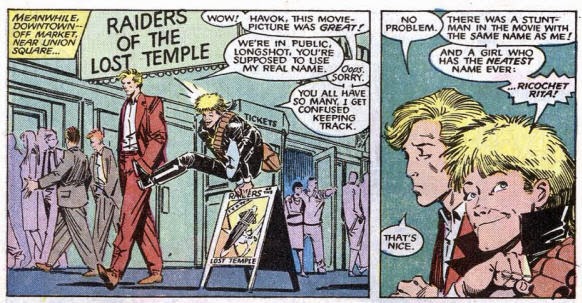 Lt. Morrell is on hand again, and warns the X-Men about Freedom Force being back in town and gunning for them.

Madelyne insists on going with the X-Men to Dallas, and Rogue notes that at least now the X-Men have an actual pilot to fly the Blackbird. 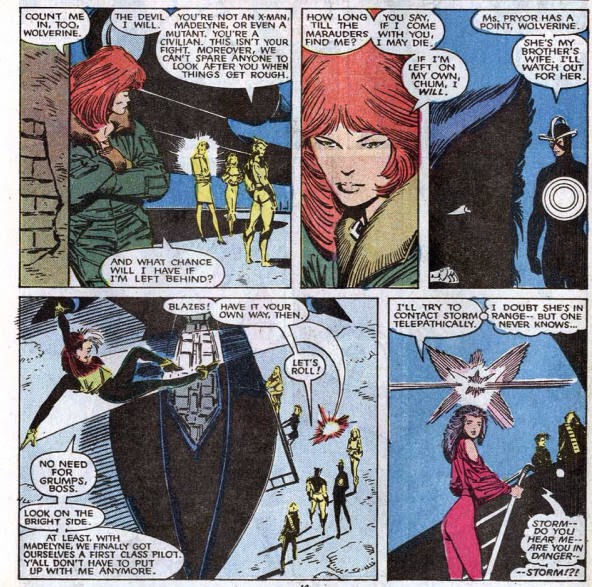 In reaching Forge, Storm realizes that she had once relied too heavily on her powers, at the cost of her other skills, and that she must merge all her skills to be the best.

Claremontisms
In an effective bit of prose, Claremont describes what Dazzler's singing voice sounds like, the sort wordiness his critics like to ding him for but which is called for here, as the art can't depict her voice and we can't hear it. 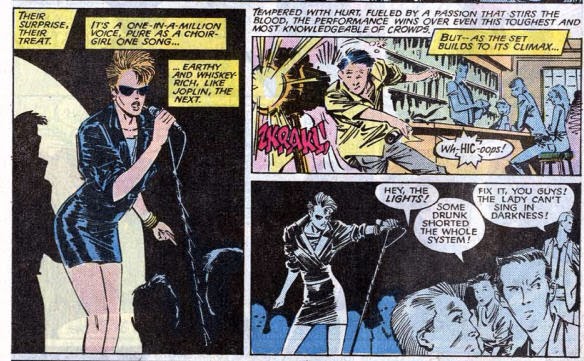 Young Love
Rogue refers to Destiny as Mystique's partner, which was likely let through at the time because it's true (they are partners in Freedom Force) but can also be read, in light of Claremont's intent for their personal relationship, as an acknowledgement of that relationship, whether he intended that implication at the time or not.

Storm notes that she loves Forge, and probably always will, something we continue to be told is the case more often than we're shown it to be.

Human/Mutant Relations
At Val Cooper's press conference, a reporter questions the logic of sending mutants to capture other mutants, likening it to letting a fox guard the chickens, to which Val counters that it's more like sending a fox to catch other foxes. Whether you agree with her logic or not, I've always liked that little rejoinder.

Val goes on to say, regarding the criminal records of Freedom Force, that America was in part founded by convicts and outcasts (which is an oversimplification at best) and insists the Registration Act isn't meant as a threat to anyone, which a gym patron watching the conferences likens to something the Nazis likely said to the Jews.

For Sale
This issue features a great full page ad for "Fall of the Mutants", drawn by Alan Davis. 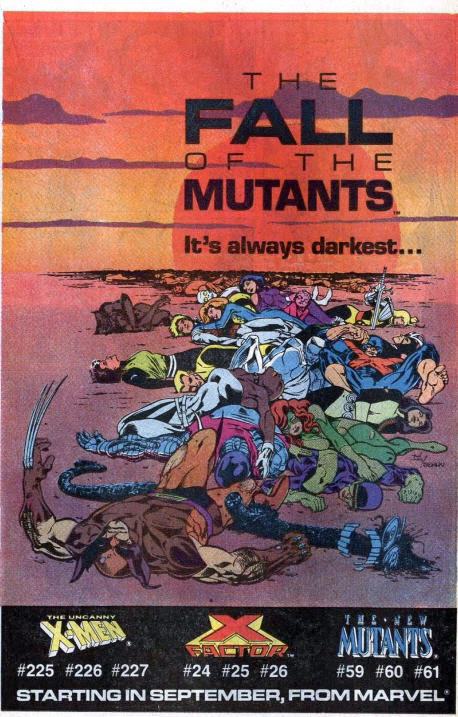 It's in the Mail
The letters page in this issue features letters about issue #217, and the response to one reveals that the Morlock Healer has returned to the Morlock Tunnels to live with the surviving Morlocks there.

Teebore's Take
Like last issue, this one is chiefly concerned with moving the characters into position for the start of "Fall of the Mutants", in and around assorted character vignettes. Rogue and Mystique get a nice scene together as Mystique warns Rogue (and through her the X-Men) about Destiny's prophecy, the purpose and nature of Freedom Force gets some page time, Havok and Longshot take in a movie and stop a mugging, and Madelyne affirms her place with the X-Men as Wolverine does the classic "I'm going to do this but I won't force anyone to come along" bit, prompting the X-Men to, of course, throw in with him despite the risk.

This issue succeeds in rising above the fill-in feel of last issue in part because Silvestri is back on pencils, but more importantly, because Storm finally reaches Forge, confronts him, and realizes (too late) that Naze has been playing her for a sap the entire time (the page or so of Freedom Force material, meanwhile, is the most intriguing part of the issue, concerned as it is with questions of security vs. civil liberties, a loaded issue that has even more resonance today than it did in 1987). Of course, reaching Forge requires Storm to first fight through more generic demon (which is tiresome, though Silvestri's presence again helps elevate it somewhat), but what matters is, by the end, Storm's journey is over. The X-Men are en route to Dallas, Forge and Storm are off the board, the Adversary looks to be triumphant: "Fall of the Mutants" is ready to begin.

Next Issue
Tomorrow, the X-Men arrive reach Dallas in Incredible Hulk #340 and Friday, X-Factor faces off against Hodge in X-Factor #23. Next week, "Fall of the Mutants" arrives in Uncanny X-Men #225.
Newer Post Older Post Home
Posted by Austin Gorton at 12:00 PM