The Walking Dead 4x09: After 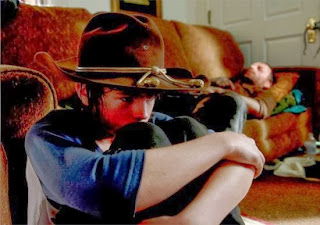 My family and I don’t discuss our genitalia. I mean, maybe I had some questions when I really young but I don’t remember that long ago. There was never a formal declaration of this non-genitalia talk policy. We just all have had an unspoken understanding that none of us are interested in the others' private parts. The Grimes family must be very different than mine because Rick and Carl seem very concerned with whose dick is bigger.

We review How I Met Your Mother on this blog and, in general, there’s very little the two shows have in common. However, this episode cements one problem both these shows share: Recycling the same, annoying plotline to death. Just as I don’t care about taking another spin on Ted/Robin carousel, I’m very uninterested in rehashing the father/son problems of Rick and Carl. This a world filled with danger lurking behind every corner. Put your daddy issues aside, Carl.

I’m going to reference the comic in this part of the review. I’m 99% sure I’m not spoiling the comic nor the show with what I will say but if you’re really cautious about this sort of thing feel free to skip to the “Other Notes” portion of this post.

So this episode is almost directly lifted from a story from the comic. It was either one or two issues long. (I can never tell since the format in most “trade paperbacks” is to not put a break between issues. It’s a pet peeve of mine to be sure.) I remember liking the story from the comics. I did not like this episode. (I went back and read the issue(s) from the comic just to refresh myself.) There was one simple reason I liked the comic version: Carl was young.

I’m not exactly sure how young Carl is in the comic but he seemed 8-10 to me. Comic Carl was realizing his dad wasn’t perfect but he still respected him. And when Rick fell unconscious due to his injuries? Comic Carl actually tried to help him with what limited medical knowledge had (beyond violently shaking him). TV Carl’s actions were callous to the point of sociopathic. Seriously, his dad was seemingly close to dying and Carl did NOTHING to try and help him.

When comic Carl has to deal with the three zombies it’s suitably tense. Comic Carl is small, young and inexperienced. When he’s eventually dispatches them it is a feel good moment for this little kid. When TV Carl struggles against three zombies it’s laughable. Wasn’t he just mowing down 100 or so zombies with his dad just a few episodes prior? And then to act all tough and proud about taking down three zombies when he nearly failed? It just made TV Carl look even more silly.

When comic Carl talks to his unconscious dad about how he doesn’t need him anymore and can protect himself it comes across as a young kid being scared and vulnerable. Comic Carl believes his dad is going to die and he'll be left alone. Comic Carl was more trying to convince himself he could survive on his own more than really believing it. When TV Carl yells to Rick that he can take care of himself better than Rick could ever care for him? TV Carl just comes across as an ungrateful, punk teenager.

Perhaps that was what the TV show is going for. Maybe they’re trying to use the father/teen aged son drama as something the audience can relate to. Maybe it even it works for some people. It doesn’t work for me. I find it boring at best and infuriating at worst. Never am I enjoying it.

Other Thoughts:
I had no idea The Walking Dead was back until it popped up on my DVR. I don't know what that says about me, the show or my credibility as a reviewer but it probably says something about at least one of them!

When Michonne was swording all the zombies in the beginning my instinct was that she should keep going until all the zombies were dead. I had to remind myself that muscles do tire after extended and repeated use. I get worn out playing Zelda on the Wii!

Of all the dreams I’ve had in my life none of them have been as introspective, lucid and/or metaphorical as any dream ever in TV/movies.

I need to reiterate, you killed three zombies Carl...barely. No need to separate your shoulder patting yourself on the back.

Regarding Carl’s tirade against Rick, I’m confused what Rick’s farming had to do with the Governor attacking the prison.

Always remember: A zombie’s bite is only as quick or slow as the plot necessitates.

The people on the Talking Dead were really impressed with Carl’s crying scene. Me...not so much.

Also on the Talking Dead, they had an apocalypse survivalist giving tips. When your first tip is how useful Hydrogen Peroxide is for its “medical benefits” you’ve lost all credibility.
Newer Post Older Post Home
Posted by Dr. Bitz at 1:25 AM