Around the Web
Just one piece for Sound on Sight from me this week, a review of Guardians of the Galaxy #11, the second first part of the "Trial of Jean Grey" crossover, which you can find here.

It was announced this week that Jeremy Irons has been cast as Alfred and Jesse Eisenberg as Lex Luthor in the still-untitled sequel to Man of Steel (the one that will feature Ben Affleck as Batman). I like the casting, particularly Eisenberg. His Mark Zuckerberg in The Social Network was already pretty Luthor-esque, and his casting suggests they're setting up Luthor as a tech-savvy media mogul type, which is a sensible modern interpretation of the character that still fits his roots, one which Eisenberg should nail.

That said, this is still a movie that is going to feature Batman and Wonder Woman (along with Alfred and Luthor and lord knows who else) as well as a Superman who did nothing to help the thousands (if not millions) of innocent people who died in the last movie and expressed zero remorse over that fact, so it's tough to get too excited about this casting, because even if Eisenberg kills it, he's still probably going to be in a mess of a movie.

Far more importantly than all that, this week my good friend, fellow blogger and frequent commenter Sarah announced on her blog that she's signed with a literary agent. Cue the fanfare! As any fellow aspiring novelists knows, landing an agent is A BIG DEAL, the key step in getting your book published and becoming rich and famous and never having to do anything but write ever again, and I couldn't be happier for her. Rest assured, once her first book (which I've read, and is pretty effing fantastic) is available for purchase, I'll be pimping the hell out of it here, so no one'll miss out on a chance to buy it.

The Simpsons: Specs in the City 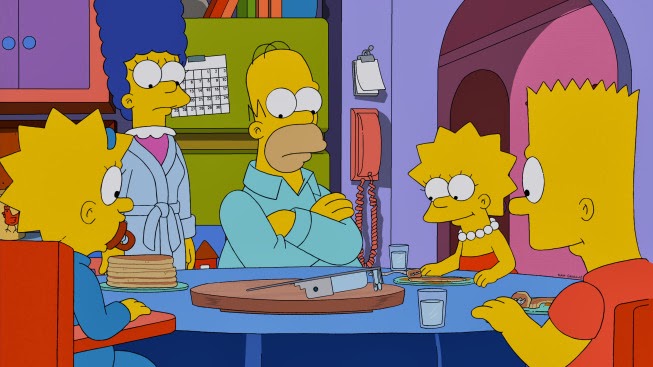 Given the production schedule of animation, The Simpsons often ends up skewering a particular pop culture or technological trend well after its time as a touchstone of the zeitgeist has passed, which makes me wonder whether writer Brian Kelly decided to build this episode around a Google Glass parody because he expected that by the time it aired, they'd be as ubiquitous as an iPhone or iPad, or just because he or someone else on staff thought it would be funny to write them into an episode just for the sake of the (mostly limp) gags involved.

Once Upon a Time: Save Henry

While it lacked a bit in build-up, Regina shrugging off the tendrils of Pan's regret tree, taking back Henry's heart and grabbing Pandora's Box in seconds was a pretty genuine "hell yeah!" moment. Her whole "yeah, I'm evil, but I love my son, so I don't really care" bit was a nice beat of characterization for a character who all to often is beholden to the plot du jour.

The flashback also reminded me how much I'd miss Cursed Storybrooke. I mean, I don't want to spend another season there or anything, but this show has deviated from its initial premise enough that returning to it now has an air of nostalgia about it.

Having Regina concoct a memory potion to forget that Rumplestiltskin built a loophole into the curse and having the Hipster Doofuses try to adopt baby Henry on behalf of Pan only to get skunked by Regina were both nice little continuity patches.

One little wrinkle though - Regina in this flashback and, frankly, for much of the show, this season and before, has consistently been shown, for all her other, often murderous, flaws to genuinely love Henry (or at least be highly devoted to him), even to the point that she willingly modified her own memories just to ensure she could fully embrace him as her son. Yet, early in the show, she was depicted as a relatively cold and heartless mother. And even if that was just a case of the show adopting early Henry's childish perspective of her, I'm pretty sure there was a scene where Emma asked point blank if Regina loved Henry and her magic truth-knowing power made it clear she did not.

Knowing full well Pan wasn't defeated (because there's still two episode left in this half-season) and waiting for the other shoe to drop, I still didn't realize that Pan and Henry switched until Henry started talking to the chief Lost Boy. So either kudos to the show for keeping me guessing, or boo on me for not figuring out sooner what was, in hindsight, pretty obvious.

I'm not adopted nor have ever adopted a child, but I am aware of its existence as a thing, and thus know that much of what we saw in this episode pertaining to adoption was a lot of hogwash. I mean, I'm pretty sure you can't just return a baby you adopted because it cries a lot.

The idea of watching Jared Gilmore play Pan-as-Henry makes me shudder, though the flip side is that eventually we'll get to see Robbie Kay play Henry-as-Pan, so at least for a brief period of time the character of Henry will be played by a relatively good actor.

Quotable Quotes
The Simpsons
Lisa: How does this mean anything when everyone's forced to do it?
Marge: What did I say about pointing out the meaninglessness of things?
Lisa: Not to...

Suburgatory
Tessa: I don’t know what to do.
Lisa: Have you considered vaginal reconstructive surgery?
Tessa: Why would I consider that?
Lisa: I don’t know, I just keep seeing these pamphlets at the doctor’s office.
Newer Post Older Post Home
Posted by Austin Gorton at 12:00 PM