In a Nutshell
The Right captures the X-Factor kids.

Plot
The Right attacks the X-Factor kids, and though they fight back, their attacks are uncoordinated and soon they're knocked out by the tranquilizer darts fired by the Right. As the Right searches the X-Factor complex for more mutants, they're attacked by Caliban, but he too is knocked out and, not being on their list, left for dead. Meanwhile, X-Factor makes their way back to the complex through the sewers, just as Boom-Boom arrives outside their headquarters. Breaking in, she spots the Right soldiers gathering up the unconscious kids and follows them. X-Factor returns and finds Caliban unconscious as Boom-Boom trails the Right to a nearby airfield. Creating a diversion, she sneaks aboard the plane with the other kids. 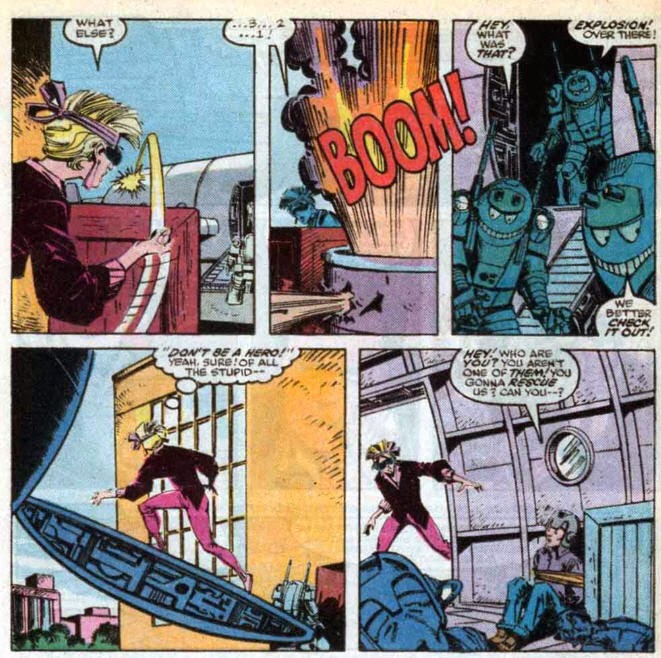 Back at the X-Factor complex, Caliban insists on using his power to help locate the captured kids, despite his injuries. Elsewhere, the Right's plane lands and Boom-Boom manages to follow them to a science museum in Arlington, Virgina. Blending in with the students visiting the museum, she tries to call X-Factor from a pay phone, but the call is monitored by the Right, and Boom-Boom is chased into the gargantuan complex beneath the museum. Meanwhile, above Manhattan, Apocalypse tests the abilities of Death. In Arlington, Boom-Boom comes across Rictor being tortured. Creating another diversion, she frees him, but when the two try to escape the complex, they come face to face with the leader of the Right, Cameron Hodge.

Firsts and Other Notables
After a fair number of hints, this issue confirms that Cameron Hodge is the leader of the Right, making it clear that Hodge is a villain who used X-Factor to further his anti-mutant agenda. 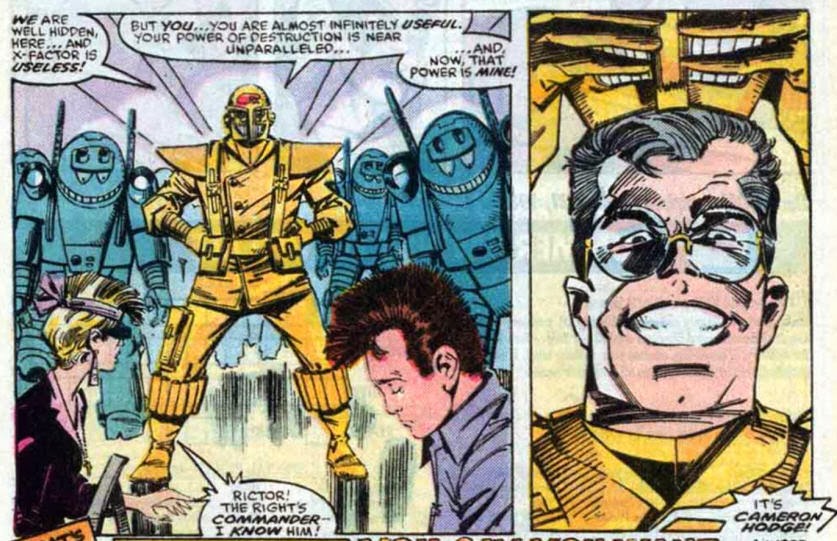 Boom-Boom returns from Fallen Angels this issue, though it'll be a couple more months before Sunspot and Warlock return to New Mutants. She ends up teaming up with Rictor in this issue, whom she doesn't know, having been away when he was taken in by X-Factor. 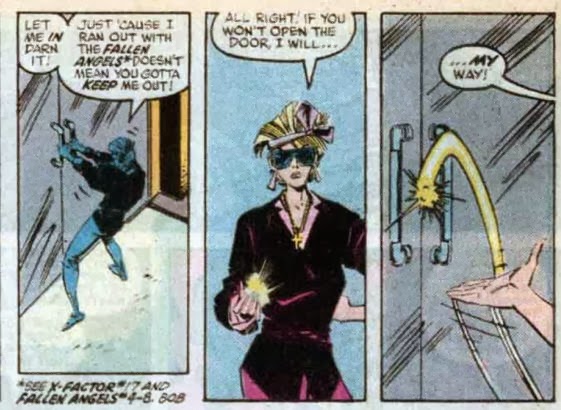 One final Death tease before his big reveal, as Apocalypse tests the abilities of his new wings. 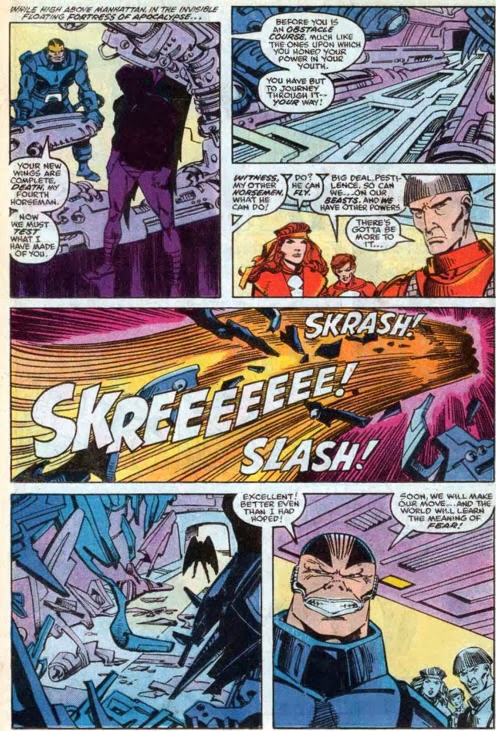 Sal Buscema fills in on art and, a few trapezoidal mouths aside, turns in a pretty serviceable Walt Simonson impression, likely helped along in part by Bob Wiacek's inks. No surprise, really, given that Buscema followed Simonson on Thor.

A Work in Progress
The Right goons refer to Rusty as "Fire-Fist", which sorta becomes his codename moving forward, though it's rarely used or referenced. 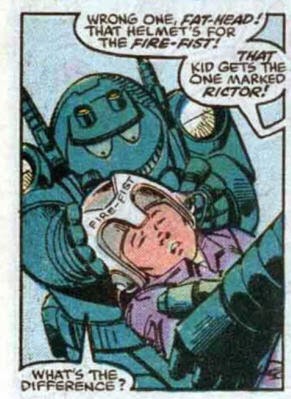 The armored Right soliders are referred to as "Smile Faces" for their distinctive armor, a moniker that sticks.

It's confirmed that Trish Tilby was wounded, but not killed, in the Right attack last issue.

More frustration for Caliban: he attempts to stop the Right, but they easily overpower his Iceman-taught combat moves and pump him full of tranquilizers, leaving him for dead. 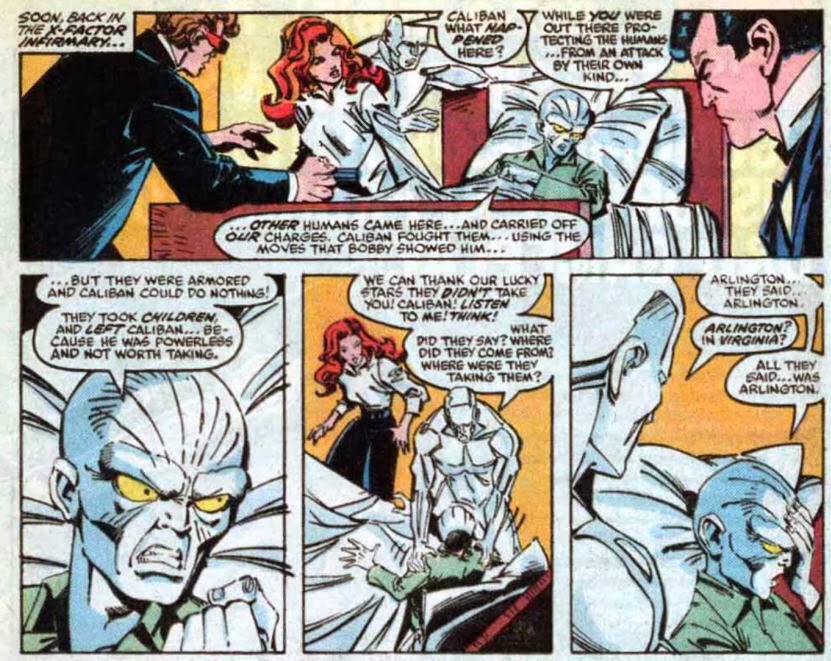 The Right's headquarters is revealed to be beneath a science museum in Arlington, Virgina. They take the kids there in order to test their abilities and attempt to use their powers to further their agenda.

Rictor declares he'd rather than die than go through more of the Right's testing. 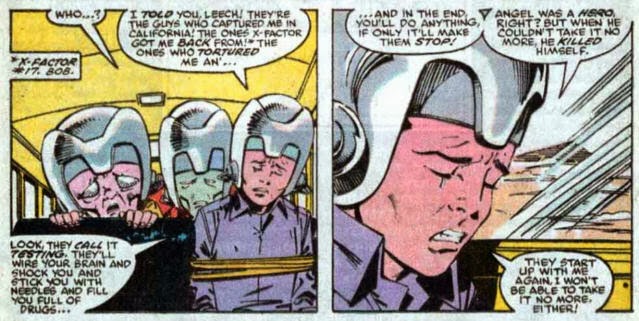 Teebore's Take
This issue once again finds the X-Factor kids in the spotlight, though thankfully as part of the ongoing storyline involving Cameron Hodge and the Right rather than in another ancillary adventure. Also thankfully, the resultant storyline is no less tense or foreboding for the presence of the kids. Simonson's penchant for histrionics works to her advantage with the heightened emotions brought out by the Right attack. Rictor's angst at being recaptured by the Right is particularly palpable, his abject terror at the prospect of being tortured and forced to use his powers to hurt people again well rendered. And the return of Boom-Boom finds the character both more effective and less annoying than ever.

But the real significance of this issue is the last page reveal of Cameron Hodge as the leader of the Right. I have no idea how surprising this was to readers at the time (in hindsight, it seems obvious, and Simonson dropped some pretty big clues even beyond the fact that Hodge has obviously been up to no good for several issues now even if he hadn't been directly linked to the Right), but it's the most recent development yet in Simonson's attempted rehabilitation of the title, as it explicitly establishes the questionable plan of posing as mutant hunters and the resultant rise in anti-mutant sentiment as the work of an out-and-out super-villain. Casting your heroes as unknowing pawns of a villain doesn't make for their finest hour, but it's a fair bit better than the characters just being morons who never realized the full ramifications of their well-intended but misguided actions.

Next Issue
Storm and Forge come face to face in Uncanny X-Men #224, the New Mutants meet the Ani-Mator in New Mutants #59, and X-Factor comes to blows with Hodge in X-Factor #23.
Newer Post Older Post Home
Posted by Austin Gorton at 12:00 PM