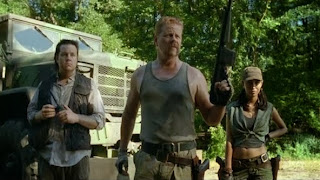 Hope in a world devoid of it. It’s a common theme in The Walking Dead. It’s also a common theme for viewers to discuss the lack of hope within this series. I’m sure this isn't the last time I will discuss this topic but it comes up now because this episode was all about hope.

Claimed followed two pieces of our fractured group. Glenn and Tara are with Sergeant Abraham and his crew. Meanwhile, Rick, Carl and Michonne were hopeful to have found an at least temporary safe haven in the house they came across two episodes ago. Unfortunately, that safety was short lived.

Glenn’s story offered the greatest hope this series has offered if not ever than since season one and the CDC building. The prospect of the world even being able to be saved is an intriguing one but it certainly feels too good to be true. Still, there are some interesting stories to be mined by characters that have tremendous optimism in the face of such a hopeless situation. Do they really believe deep down that they can save the world or are they just trying to fool themselves into thinking it's possible for fear of the alternative.

The Rick, Carl, Michonne plot of the episode was the opposite. They’re coming fresh off their supposedly permanent safe haven being destroyed and simply want to hunker down in the house they came across for a brief respite. Rick even comments on how no where they go will ever truly be safe. Then, when Michonne and Carl are gone and Rick is basically passed out, the house becomes overrun with shady miscreants. Rick, however, is able to escape relatively undetected.

Rick, Carl and Michonne are left to wander the Georgia wilderness again looking for safety. But even their story ends with some modicum of hope. The same hope that Tyrese, Carol and the kids found last episode: Terminus. Will Terminus or Sgt. Abraham and Eugene's plan to save the world offer legitimate hope or will they simply be fool's gold? I have my own thoughts but, really, only time will tell.

Other Thoughts:
I’m kind of disappointed we didn't actually get to see the face to face reunion between Michonne and Rick and Carl.

I've had soy milk before. It really isn't that bad.

When Michonne tried to act silly but Carl would have none of it I was kind of miffed. I’m not saying it isn't realistic, but boy does it bug me when teenagers try to act like they're too mature for something they actually aren't.

All the characters keep scavenging food from houses. Someday they’ll be no more prepackaged food, right?

I’m curious how that entire family died sitting in that room. Starvation? If I was starving to death at some point I'd take my chances with the zombies. What's the worst that could happen?

I might look forward to Carl and Rick reuniting with Judith if they had shown any attachment to her at all while they were all together.

When the ruffians invaded the house I thought for a second it might be Sgt. Abraham and crew. Obviously they were not.

I initially thought the fight over the bed ended in the guy's death. But I think he was still breathing. Still, it seems pretty over the top to fight like that just for a bed, even for a bunch of ne'er-do-wells.

Apparently, Eugene is the only bad shot in the entire series.

Why was the guy Rick killed in the bathroom fully panted? Don’t get me wrong. I didn't really want to see his junk but what’s the point of sitting on the toilet with your pants up? Maybe he was just looking for a place to sit? I guess it makes sense. We've already seen what happens when you use someone else’s furniture.

I'm paraphrasing, but in a pre-taped interview with Andrew Lincoln on The Talking Dead Andrew said that Rick knew immediately he was in trouble because any group of people still alive in that world wandering and scavenging must be ruthless killers, thieves and/or rapists. Ummmm...except for his own group? In the end, I don't blame Rick for being cautious but he should still acknowledge that another wandering group COULD be filled with good people.
Newer Post Older Post Home
Posted by Dr. Bitz at 9:56 AM