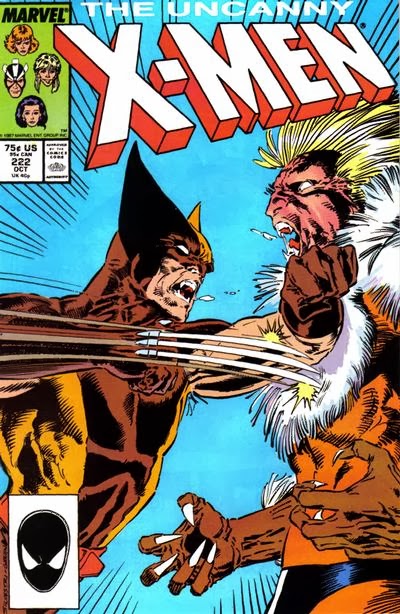 In a Nutshell
The X-Men vs. the Marauders, round two.

Plot
As Polaris threatens Dazzler and Rogue, Havok unknowingly blasts her from afar, knocking her unconscious. Rogue flies Polaris and Dazzler to the beach, as Psylocke and Havok arrive alongside Lt. Morrell. As Rogue flies off to find Madelyne, Havok is shocked to discover he blasted Polaris, only a moment before she wakes up and attacks him. Meanwhile, in the Rockies, Storm and Naze are attacked by a pair of demons. After they're defeated, Naze suggests Forge may have loosed the demons by opening the gateway between worlds, prompting Storm to swear to kill him. Back in San Fransisco, Psylocke is able to temporarily free Polaris from Malice's control, but when other Marauders attack, Malice reasserts control, trapping all but Havok, who grabs hold of Polaris as she flies off, in the sand. Meanwhile, on the Golden Gate bridge, Scalphunter targets Rogue, but is distracted by Longshot and attacked by Wolverine. 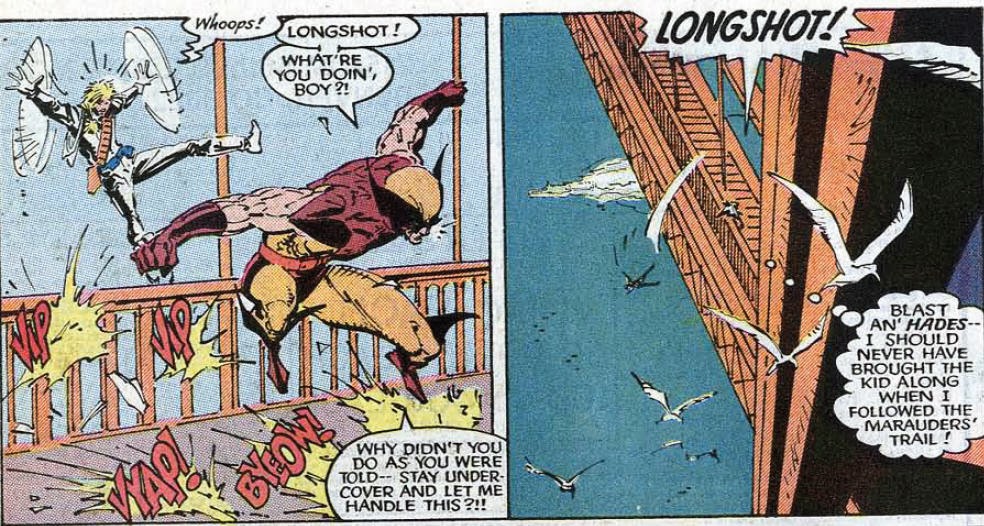 As Longshot plummets off the bridge, Wolverine's power is taken away by Scrambler just as Sabretooth attacks, but Wolverine painfully reminds him that Scrambler can't affect his claws. As Scalphunter unleashes another volley, Wolverine leaps off the bridge and is caught by Rogue. They return to the bridge to find the Marauders gone, but Wolverine spies Longshot and Madelyne in the water, the pair having luckily rescued each other. As he fishes them out, he speculates that the Marauders fled, believing Madelyne to have died. A few minutes earlier, Polaris drops Havok on Alcatraz after seeing Scalphunter's signal to retreat. She tells Havok he could always try to stop her, at the cost of the life of the woman he loves. A tormented Havok ultimately does blast her, but Polaris easily blocks the attack, flying away saying that while he failed to kill her, what matters is he tried.

Firsts and Other Notables
This issue features the first rematch between Wolverine and Sabretooth, following their first (publication-wise) encounters during "Mutant Massacre" in issues #212 & #213, and even though their battle is less than two pages long, said rematch led to back issue prices for this issue skyrocketing in the 90s (even higher than the price for the previous issue featuring Mr. Sinister's first appearance). I actually read it for the first time in the short-lived Sabretooth Classics reprint series (yes, there was a time in the 90s when Sabretooth warranted his own series reprinting past appearances) before tracking down a reasonably-priced back issue at a convention after some of the Wolverine/Sabretooth hubbub had died down.

Havok learns Polaris has been possessed by Malice this issue, his shock at this turn of events suggesting that he hasn't spoken to her since he left for New York to seek out the X-Men in issue #219, and thus never bothered discussing his decision to re-join the team with her, nor contacted her in any way during his ensuing time with the X-Men (including time, such as in X-Men vs. the Avengers, when he was seen actively pining for her). Alternatively, it's possible that he did call her, and Malice just played along, pretending to be regular old Lorna until she could reveal herself to him dramatically, but I have a hard time picturing Malice hanging around their house waiting for Alex to call. 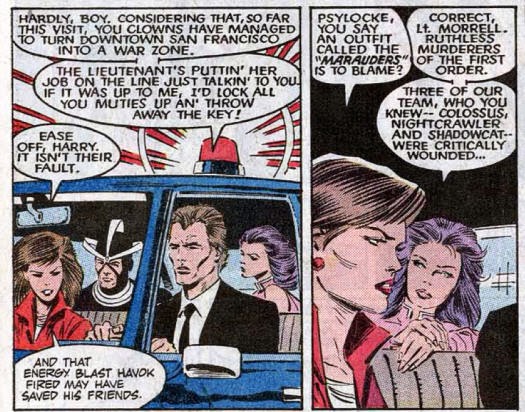 Also, the group of Japanese kids who witness the X-Men's return from the Secret Wars in issue #181 are at the beach, this time using their guidebook to superheroes (rather than their monster guidebook, as before) to identify Dazzler. 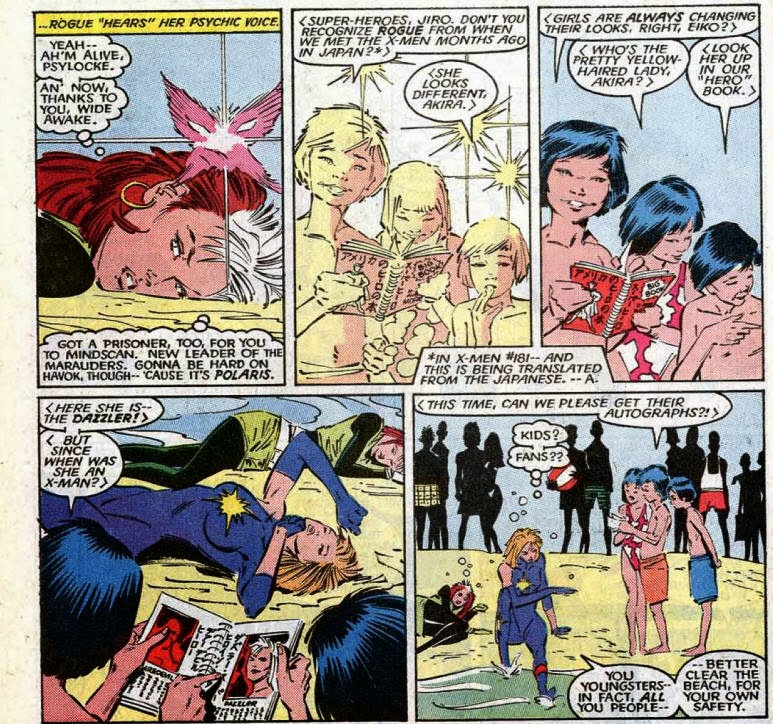 In the subplot, Storm and Naze battle the Eye Killers, a pair of Native American demons vulnerable to fire. They first appeared in a Claremont-penned issue of Dr. Strange (vol. 2 #38). 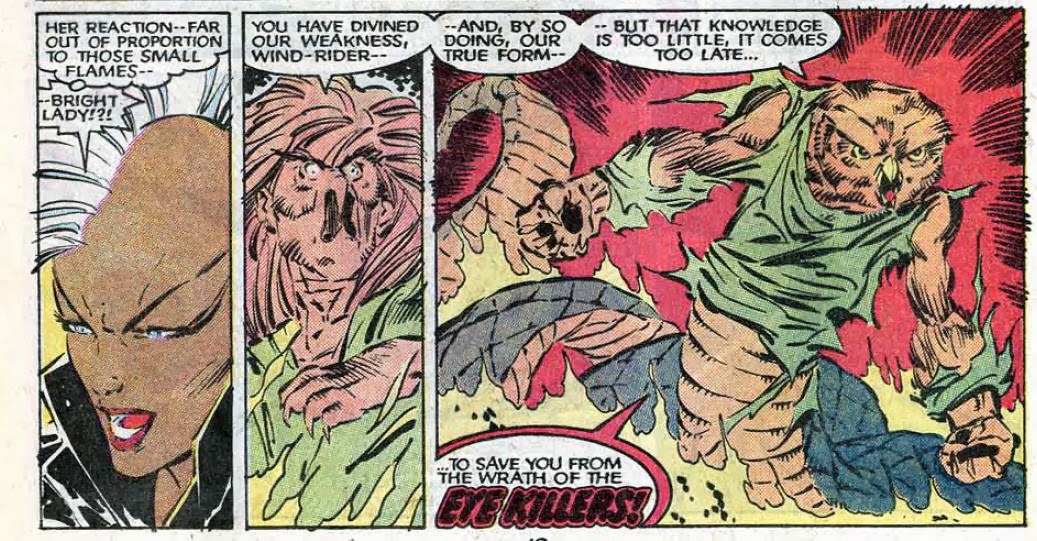 The intro caption on the first page (the box that sometimes appears above the title, spelling out the premise of the series for first time readers) has been replaced by new text seemingly written from the perspective of Polaris/the Marauders.

It's Statement of Ownership time again, and in the past year, sales climbed over the half a million mark, as this issue lists the average number of copies sold per month in the preceding year to be 630,020, with the total number of issues sold in the month nearest to the file date being 622,105, up from the ~450k on average per month and 474K nearest to the filing date previously reported.

The Chronology Corner
The Official Marvel Index also notes Dazzler as next appearing in the flashback during issue #228, even though it also noted the same thing following issue #218. I'm not sure what's going on there (dual flashbacks?), but I've only read that issue once, so maybe it'll become more clear once I read it again.

A Work in Progress
A couple of dialogue boxes in this issue are clearly re-lettered, though its unclear why.

Dazzler, absorbing all the sound in the immediate area, fails to realize how much it spooks the crowd, prompting her to admit that while she's not exactly a rookie to the superhero game, she still has a lot to learn. 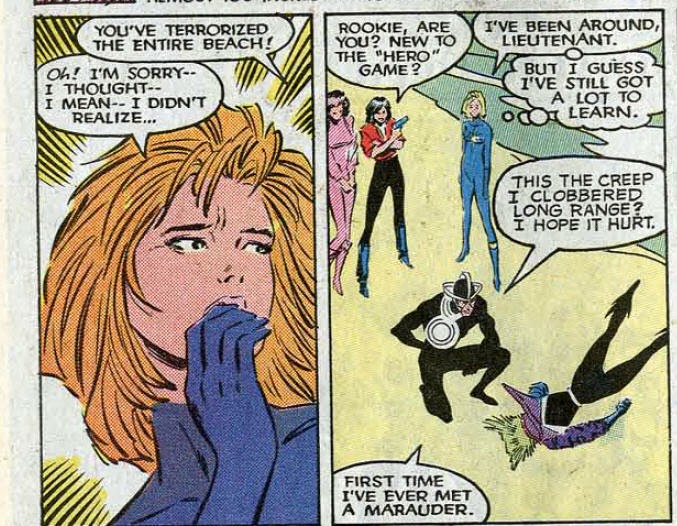 Scalphunter's mutant ability is hinted at, as he says he can craft a weapon to kill anything.

Sabretooth refers to Wolverine as "Logan", revealing that he knows his real name. 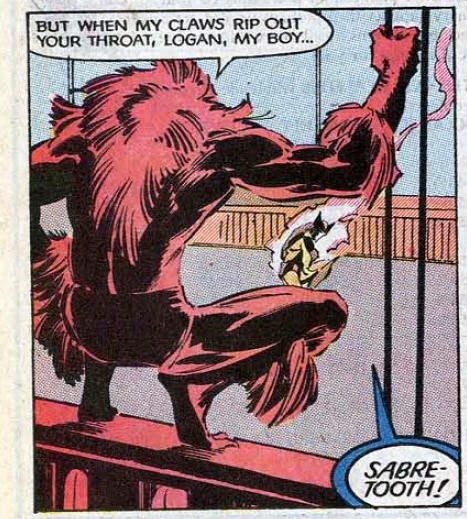 I Love the 80s
A man on the beach is reading Wild Cards, an anthology series about a world that becomes populated with superheroes and supervillains, created and edited by "Song of Ice and Fire" author George R.R. Martin, to which Claremont contributed stories. 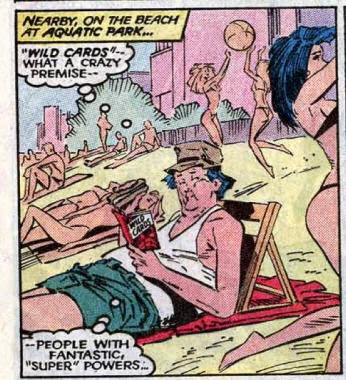 Spectators watching the X-Men/Marauders fight dust off that old chestnut of believing Lucasfilm or Steven Speilberg is filming a movie.

At issue's end, Polaris has Havok at her mercy, yet the villain allows him to live (of course), saying that allowing him to live with the knowledge that his lover has been corrupted is more painful than death.

Artistic Achievements
There's a neat "only in comics" visual representation of Dazzler's "absorb all the ambient sound around me" trick, in which she sucks the dialogue right out of their speech bubbles.

The Best There is at What He Does
Something that isn't always pointed out when showing Wolverine in combat, when Sabretooth punches Wolverine he breaks his hand, with Wolverine comparing punching him to punching steel. 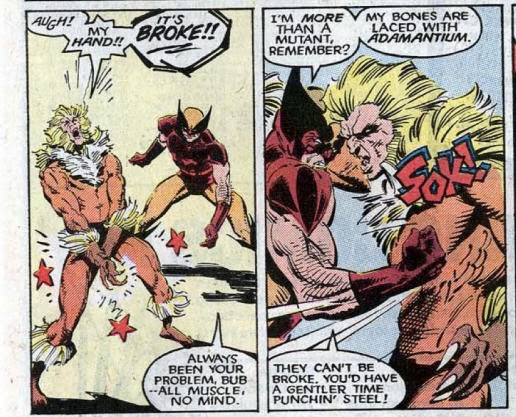 Teebore's Take
The issue concludes the Marauders/X-Men rematch in exciting fashion, turning over the vast majority of its pages to straight-up action, giving Silvestri one of his first chances to cut loose with the entire team since joining the book. As Wolverine points out, this battle is more of a draw, with both teams getting in their licks, but with the X-Men technically emerging victorious as not only is Madelyne Pryor saved, but the Marauders are led to believe she's dead, freeing her from future attacks (all the better for her to start hanging out with the X-Men again). The fight choreography is inelegant, at times - Rogue, Psylocke and Dazzler disappear halfway through the issue, for example, and it's not always clear how certain characters are moving through the city - especially compared to last issue, but this nevertheless wraps up a fun and engaging little action-oriented two parter, one which effectively lays the several seeds for future stories.

Next Issue
Tomorrow, you will know mutants by their whacky antics in New Mutants #57, followed by the reading of Angel's will in X-Factor #21 on Friday. Next week, Storm retakes center stage in Uncanny X-Men #223.
Newer Post Older Post Home
Posted by Austin Gorton at 12:00 PM