Around the Web
One review from me up on Sound on Sight this week, covering the still-not-as-fun-as-it-should-be next chapter in IDW's X-Files Conspiracy crossover, this time featuring the Teenage Mutant Ninja Turtles.

The first trailer for Guardians of the Galaxy hit the internet this week, and if you haven't checked it out, do so. As I said on Twitter, I'm an easy mark when it comes to trailers, but this got me even more excited for the movie, especially for Chris Pratt's take on Starlord. This movie will be a tough sell, even to the millions who have embraced stuff like Iron Man and the Avengers, but the trailer seems to suggest the filmmakers are aware of this, and doing their best to make sure everyone knows what to expect from the movie.

Also, in perhaps the most WTF news of late, NBC announced that it is rebooting Heroes as a 13-episode "event series" in 2015. Alan Sepinwall does a good job laying out just why this seems like such a bad idea here, though he overlooks one key component: in addition to all its other problems, Heroes under Tim Kring was pathologically incapable of showing any exciting action sequences, at one point literally confining a fight that was the climax of a season to a locked room and showing the audience a character watching the fight through a keyhole rather than the fight itself.

All of which is to say that while a Heroes reboot in and of itself may not be a terrible idea (in terms of doing something with the concept of "ordinary people with extraordinary abilities" while trying to get some juice from the brand name), putting Kring back in charge seems especially stupid. That said, I'll probably still watch it, just to see how awful it is (what the kids these days call "hate watching").

Once Upon a Time: Going Home 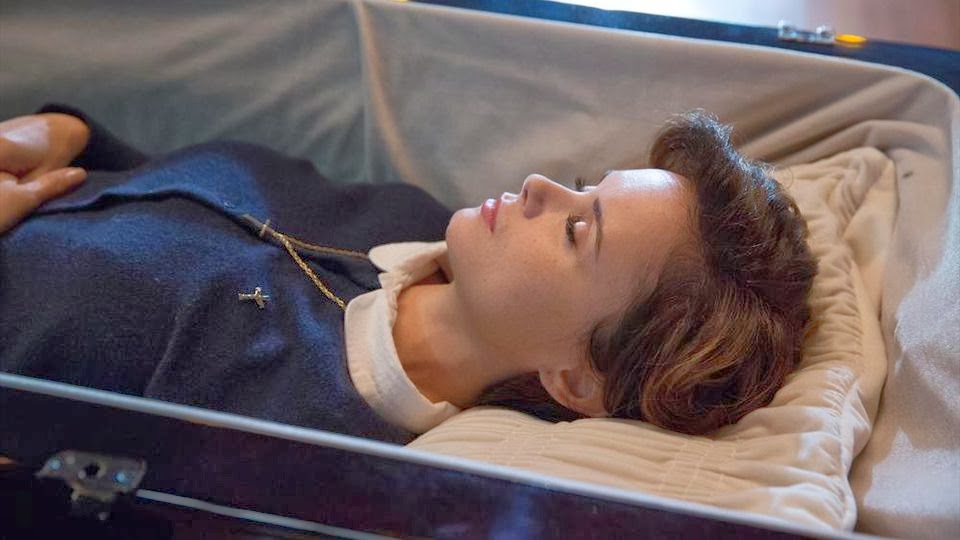 Once again, we get another deus ex machina (the Black Fairy's wand) that would have been better serviced had it at least been mentioned, even in passing, in a previous episode.

And once again, the rapid plotting of this show is both its best and worst friend. Pan's plan was dealt with in a delightfully brisk manner that prevented it from falling apart under too much scrutiny, yet at the same time, the Blue Fairy dies and returns and nobody has the time to give a damn.

There's absolutely no way that's the end of Rumplestiltskin, right? I can't believe the show would write him out permanently, even if his death scene was the best part of this episode (and now that prophecy about Henry being his undoing has been fulfilled).

The "one year later" time jump at the end does a lot to help smooth over just how much Henry's been hit with the puberty stick of late.

Community: Geothermal Escapism
Sad as I am at the departure of Troy, this was pretty much the best goodbye episode we could have expected, offering up one final "Greendale goes insane" high concept episode for Troy and Abed to participate in, made all the better because the craziness tied in to the difficulties Abed had in saying goodbye.

It (wisely) went unremarked upon, but I also appreciated that Britta was the one who helped Troy and Abed comes to terms with Troy's departure. Not only did it makes sense given Britta's character, but it was a quietly effective nod to her relationship with Troy.

Putting aside any shipper discussion, I love that in these crazy concept episodes Jeff and Annie always seem to end up allied and working together in some capacity.

Analysis of Cork-Based Networking
While the Annie/Hickey plot, loaded with guest stars and prompting the title as it did, was clearly the A-story of the episode, I actually liked the other two plots more (Britta trying to spoil Abed while he ends up in another romance-of-the-week plotline and the rest of the gang trying to come up with a dance theme that goes horribly wrong), the Abed/Britta stuff for the way it hung a lantern on Abed's past romances (and brought back the coat check girl) and the dance stuff for the way it absurdly but diligently tried to sell "Fat Dog" as a thing.

Parks and Recreation: Ann and Chris

So long, Anne and Chris. I will miss you, even though neither of you were the show's funniest or most thematically important characters. I will miss you because Leslie and Ben will miss you. Hopefully, we'll get to see you again in some capacity before the series ends.

And hey, at least Rob Lowe got to leave on a comedic high note, dancing to "One Headlight". It's no "stop pooping", but still pretty great.