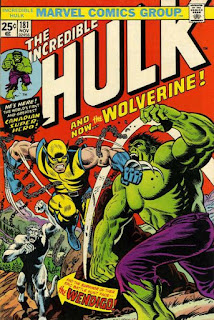 In a Nutshell
The first appearance of Wolverine

Plot
The Hulk enters Canada, drawn there by the sister of the Wendigo, who hopes to transfer the Wendigo curse from her brother to Hulk. Meanwhile, the Canadian military dispatches Weapon X to capture the Hulk. Wendigo and Hulk fight one another, pausing only when Weapon X, calling himself Wolverine, arrives on the scene. Realizing both his foes are nearly invulnerable, Wolverine convinces Hulk to help him defeat Wendigo. Thinking perhaps this means Wolverine is his friend, Hulk agrees, but once Wendigo is defeated, Wolverine turns on Hulk, determined to complete his mission. But Hulk manages to land a glancing blow on Wolverine, strong enough to knock him out, and when he wakes up, his superiors order him out, his time limit to capture the Hulk on his own having expired.

Firsts and Other Notables
These issues represent the first appearance of Wolverine, with the character referenced once and then appearing on the final panel of issue #180, then featuring heavily in #181 (which is considered his true first appearance) before appearing in the first page of #182. After that, he next appears in Giant-Size X-Men #1, when Professor X recruits him for the "All New, All Different" iteration of the team. 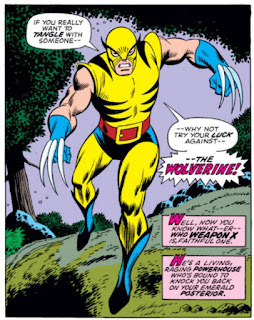 As a result of first appearing in the Hulk's book to fight Wendigo, Wolverine has something of special relationship with those characters, with the animosity between him and the Hulk a recurring theme throughout the two characters subsequent meetings, even as both have changed and developed over time.

Wolverine is a textbook case for the difficulty in assigning creator credits to characters devised in a collaborative, work-for-hire environment. He is generally credited as the creation of Len Wein (who wrote these issues) and John Romita Sr., Marvel's art director at the time, who created the look of the character, including his claws. But Romita never drew him in a published comic; Herb Trimpe's intrepretation of the character is the first the public saw (though Trimpe has routinely denied any creator credit for the character). And Wein only created the character after being asked by Editor-in-Chief Roy Thomas to create a small, feisty Canadian character named Wolverine, so at least some of the character's initial attributes came from Thomas, rather than Wein. Artist Gil Kane, drawing the cover to Giant-Size X-Men #1, mistakenly tweaked his mask to give it it's now iconic look, a mistake Dave Cockrum ran with as he drew the character regularly in X-Men. And, of course, a case can be made that Wolverine as he's generally known today is in large part the creation of Chris Claremont, who wrote and developed the character for decades.

And, of course, one of the more infamous "aborted" origins for Wolverine was that he was, in fact, a wolverine mutated into human form, an idea often erroneously attributed to Len Wein (notably by Dave Cockrum in 1982's X-Men Companion) but which in fact didn't really come along until Claremont started writing the X-Men (and which was promptly dropped), along with the fact that Wolverine was, in fact, older than a teenager (as revealed when Cockrum first drew him without his mask.

Incidentally, you can find a whole list of comic book legends pertaining to Wolverine (his creation and otherwise) here.

A Work in Progress
Wolverine is referred to alternative as both Weapon X and Wolverine throughout this story, usually the former by his Canadian superiors and the latter by himself. 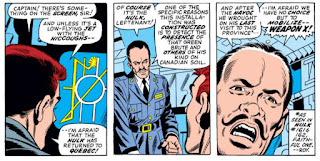 As drawn in issue #181, Wolverine's claws are thicker and rounder than the angled blades they'll later be depicted as, in part because, originally, they were intended to be part of his gloves and not protruding from his body. 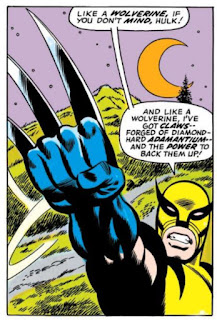 The claws are said to be made of adamantium, though Wolverine claims they can't cut through Hulk's hide, something that will later be shown to be false. 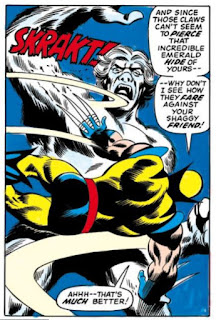 Though the details are vague, the idea that the Canadian government has spent time/money developing Wolverine as a superhero is here right from the start. Also, while it's clear he's a mutant from the start, this story suggests his powers are simply his increased speed, strength and savagery.

Wolverine basically convinces Hulk that "the enemy of my enemy is my friend" in order to get them to team up againt Wendigo. 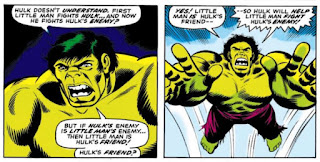 That 70s Comic
At one point, Hulk punches Wolverine, but his speed and stamina save him from having his head knocked clean off. 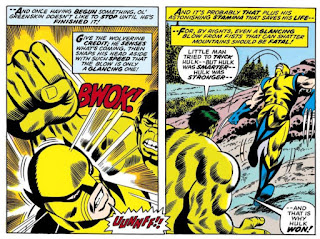 The Best There is at What He Does
Wolverine declares here that "moving" is the thing he does best.

Having failed to capture the Hulk within his given time limit, Wolverine is retrieved by the Canadian military; he's reluctant to leave, but acquiesces when told "not to disobey orders".

Austin's Analysis
As someone attempting to assemble a complete run of both X-Men and Avengers series, I've always had a lot of sympathy for anyone trying to do the same for Incredible Hulk, because I suspect the hardest issue for them to find, and the one they'll pay the most for (possibly even beyond #1), is #181, all because it's the debut of a character who is insanely popular but, in the grand scheme of things, really isn't all that important to the Hulk.

Because, of course, Wolverine as presented here bears little resemblance to the character he'll become, functioning mainly as a minor antagonist intended to add a different wrinkle to another standard Hulk/villain-du-jour fight, and to play up some of Hulk's trust issues (with Wolverine first aiding Hulk against Wendigo, then immediately turning against him once Wendigo is seemingly defeated, since stopping Hulk is his mission). It remains unclear if Wolverine was created with the intention of seguing him into a new group of international X-Men after his tryout here, or if he was simply meant to be a one-off antagonist for the Hulk (earning more appearances, of course, based on fan reaction), but what is clear is that while the broadstrokes of the later character are there - the claws, the small stature and fierce personality - it is with the X-Men - and Chris Claremont - that Wolverine will become the character we know him to be today.

From the perspective of an X-Men fan (rather than a Hulk fan), these issues are little more than a curiosity then, the proof of the fact that the character who most represents the X-Men in the eyes of the general public did not first appear in an X-Men comic or anywhere near one. Squint hard, and the future of the character can be seen in these pages; certainly, little here is overtly contradicted by later stories, even as those stories develop and expand greatly on what is presented. But taken on their own, without any knowledge of what's to come, it'd be hard to believe that the character introduced here, across three otherwise workmanlike issues of The Incredible Hulk, would go on to become, arguably, Marvel's most popular character.