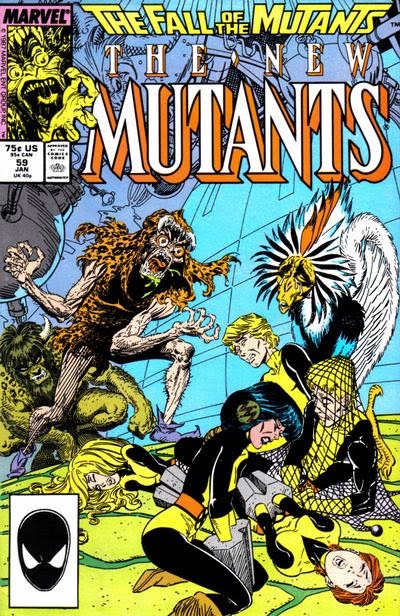 In a Nutshell
The New Mutants are captured by the Animator.

Plot
Landing on the island from which Bird-Brain came, the New Mutants find themselves surrounded by angry human-like animals, animates, similar to Bird-Brain. Below, a scientist working for the Right who calls himself the Animator, and who is responsible for the creation of the animates, detects the arrival of the New Mutants. Not wanting to draw the attention of Cameron Hodge, he calls the Right and tells them to stay away from the island while he deals with the mutants. Above, Bird-Brain is able to calm the animates with the food he brought, but then they turn on him, saying Bird-Brain has become too much like man, who is the enemy. In New York, Roberto and Warlock return to the mansion after their adventures with the Beat Street Club. They are reunited with an equally overjoyed and angry Magneto, but quickly discover the rest of the New Mutants are gone.

Back on the Animator's island, a whistle sounds, which marks the beginning of the testing and calls all the animals to a massive maze. Bird-Brain insists he must rescue all his friends, including the littler animals being held at the end of the maze by the Animator. The New Mutants, confident they can handle the maze, agree to stay and help. However, they quickly realizes the severity of their situation, and are attacked by three massive animates, who manage to overpower them. Captured, they're brought before the Animator, who angrily decries Bird-Brain for taking a name and wearing clothes, telling him he's just an animal. He then orders the animates to destroy Bird-Brain and all his friends.

Firsts and Other Notables
This is the first appearance of the Animator, aka Dr. Animus, a scientist who works for the Right. He is responsible for the creation of Bird-Brain, as well as the animal/human "animate" hybrids populating his Dr, Moreau-esque island. He is not conducting the research the Right hired him to do, which is why he is keen on keeping the Right away from his island. He serves as the main villain of New Mutants' "Fall of the Mutants" contribution, and thankfully doesn't appear much after this story. 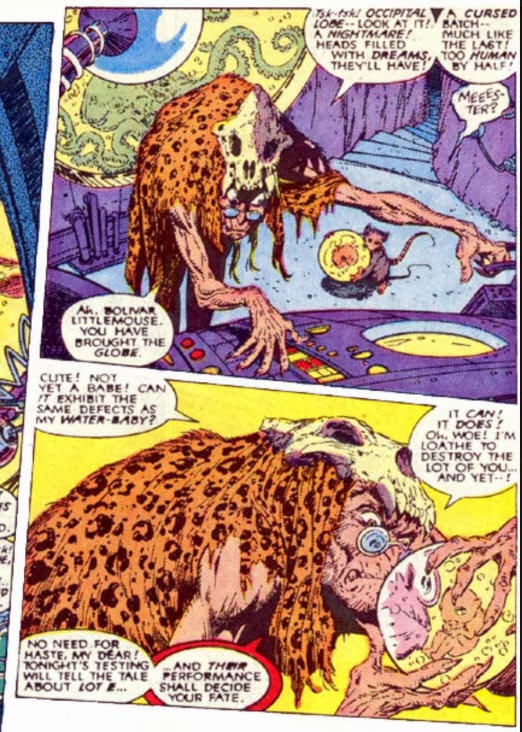 Sunspot and Warlock return this issue, following the completion of Fallen Angels, though of course, when they arrive, only Magneto is at the school.

The Chronology Corner
Just prior to this issue (between Fallen Angels #8 and this), Sunspot and Warlock appear in Power Pack #33. It's basically a condensed, one-issue version of the arc they go through in Fallen Angels, questioning whether they have the stuff to be heroes before determining they do, which is why I'm not giving it its own post.

A Work in Progress
Sam hangs a lantern on it and says that the Animator's island reminds him of a movie (aka Island of Dr. Moreau). 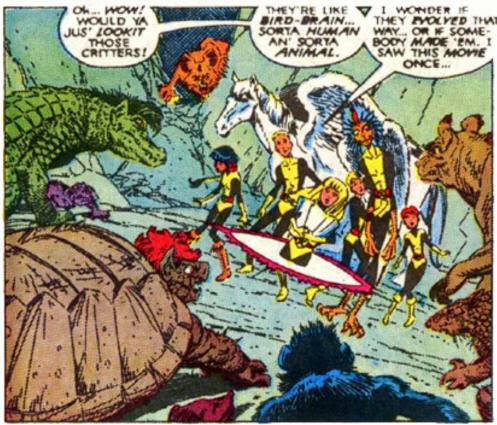 In another bit of daft characterization, Sam and Dani, the co-leaders of the team and its oldest members, talk themselves into entering the maze and helping Bird-Brain's people instead of seeking Magneto's help, saying he's likely already going to be mad at them, so what's the harm is being gone even longer? 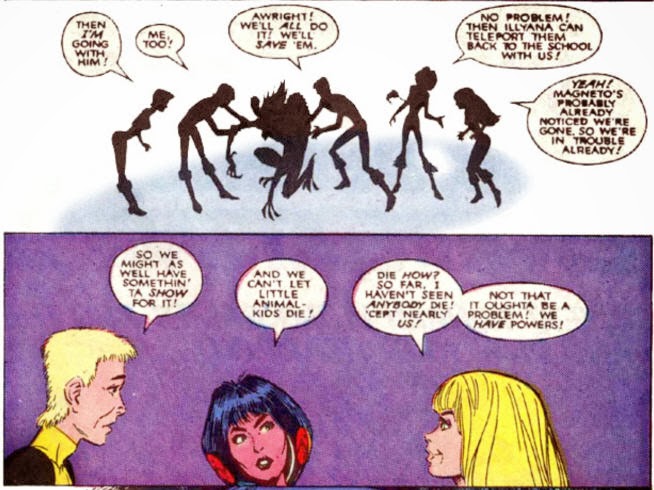 Illyana's Soul Sword is retrieved from Limbo, the first time it's been used since issue #52 (though it's unclear why it was summoned, as it only works on magic and the Animator's creatures aren't magical. It is quickly returned to Limbo when Illyana is knocked out).

In a genuinely humorous moment, a captured Rahne begins to argue with the Animator as he uses the Bible to justify his treatment of the animates, and Sam points out the Animator probably isn't too receptive to a debate on scripture. 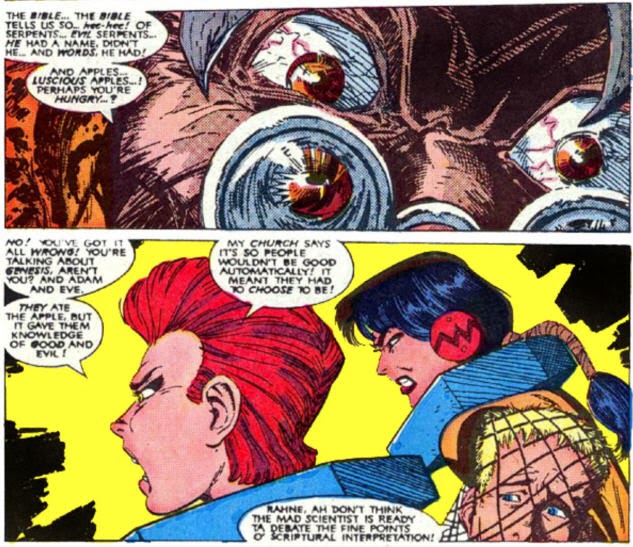 They're Students, Not Superheroes
Even before they've entered the building, Warlock and Sunspot are talking about the upcoming midterms, because apparently the only way to get across the idea that characters are "real" teenagers is to have them constantly talking about midterms. 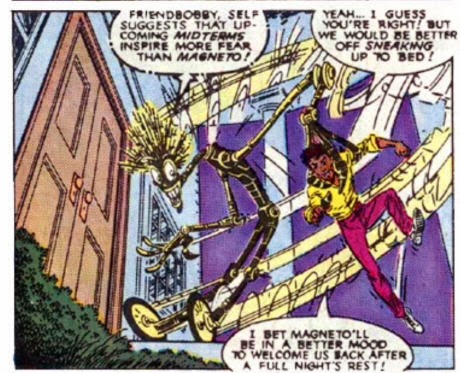 Teebore's Take
On the one hand, with the arrival of "Fall of the Mutants", we get some semblance of a plot back in the book, as all the whacky Bird-Brain antics of the previous two issues take a back seat to a more traditionally-structured story, complete with deadly obstacles and a villain to overcome, with the added benefit of this taking away space from Bird-Brain and his "Squak-AWKs". And the sole element of the previous two issues to elicit a feeling other than a headache - the plight of the animates - serves as the impetus for the New Mutants' actions here, which helps shore up the plot.

On the other hand, while the X-Men are spending "Fall of the Mutants" fighting a chaos demon who threatens to destroy all reality in the midst of their prophesied deaths and X-Factor is fighting a powerful mutant and his henchmen to save New York City, the New Mutants are fighting a scientist in a leopard skin cape with a skull for a helmet. The idea of the New Mutants getting cocky is a decent one - it plays both to the "make 'em younger" edict and the book's overall "students not superheroes" approach - but their antagonist needs to be somewhat menacing for it to work (the New Mutants don't even meet the Animator until after they've learned the lesson about being cocky). Or, to put it another way, that the New Mutants are bested by enormous animal creatures is fine, especially in light of their cockiness. Once they're at the mercy of a half naked loon, though, it becomes more ridiculous.

Obviously, the New Mutants are the junior team, and aren't supposed to be fighting super-villains, but there's still a tonal disconnect, not only between this story and the other "Fall of the Mutants" entries, but between this story and previous New Mutants stories. Next issue will attempt to add some gravitas to the proceedings, but there's nevertheless no denying that the Animator is weak sauce compared to the Adversary and Apocalypse, with the crossover, such as it is, forcing that comparison even if it is unfair.

Next Issue
Tomorrow, X-Factor meets Death in X-Factor #24. Next week, the world starts to end in Uncanny X-Men #226, and one of the New Mutants pays the ultimate price in New Mutants #60.
Newer Post Older Post Home
Posted by Austin Gorton at 12:00 PM