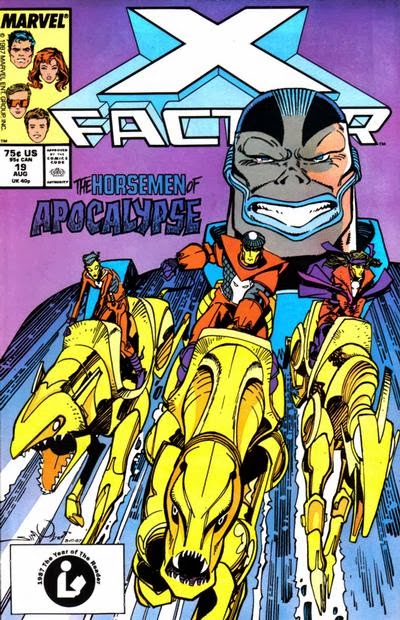 In a Nutshell
Apocalypse unleashes his Horsemen on X-Factor.

Plot
As Scott and Jean clean-up the damage caused by their recent fight and discuss Hodge's machinations, debating whether they should just shut down X-Factor, Iceman, Beast and Caliban search the city for Boom-Boom. As they search, Iceman's super-charged powers attract attention, including a pair of news choppers that begin to follow them. Overhead, Apocalypse watches X-Factor as his Horsemen squabble amongst themselves. They tell Apocalypse they are powerful enough to take down X-Factor themselves, without the fourth horseman, so Apocalypse sends them to face X-Factor as a test of their abilities. At X-Factor headquarters, as Scott and Jean are training Leech, Rusty and Skids rush in to tell them their teammates are on TV, being attacked. Meanwhile, Beast, Iceman and Caliban take the fight with the Horsemen into Central Park to limit the collateral damage. 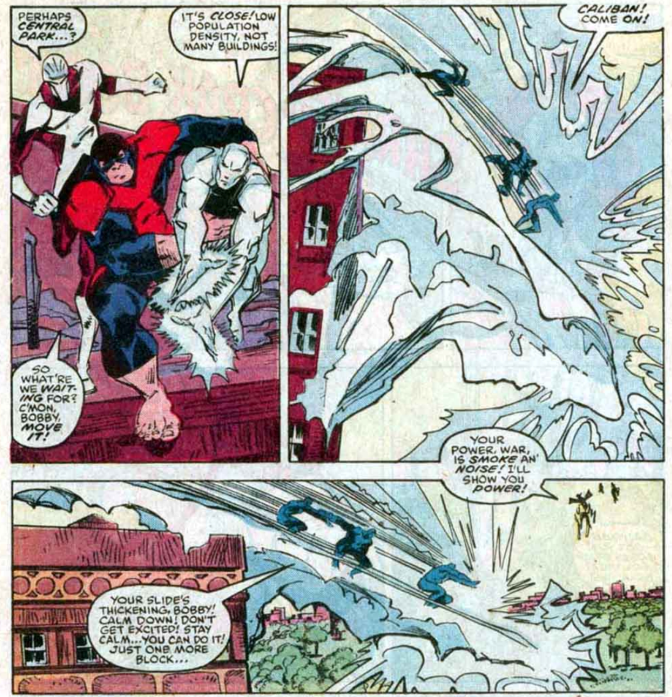 There, they are joined by Cyclops and Marvel Girl, but the team is forced to split their focus as the Horsemen target the circling news choppers. During the fight, Pestilence touches Beast, infecting him with a deadly plague. With the fight getting out of control, Cyclops orders Iceman to unleash his power, freezing everything in sight. He creates a massive dome of ice that ensnares the Horsemen, but at that moment, Apocalypse teleports his minions back to his ship. As Marvel Girl carries her teammates back to their headquarters, Cyclops announces that whether they hunt evil mutants or save good ones, they need to keep doing it, but that Cameron Hodge needs to go.

Firsts and Other Notables
This issue is the first time the Horsemen of Apocalypse are seen in action, riding their metallic steeds, as Apocalypse sets them against X-Factor to prove to them the value of teamwork. In the process, he continues to be impressed by X-Factor. 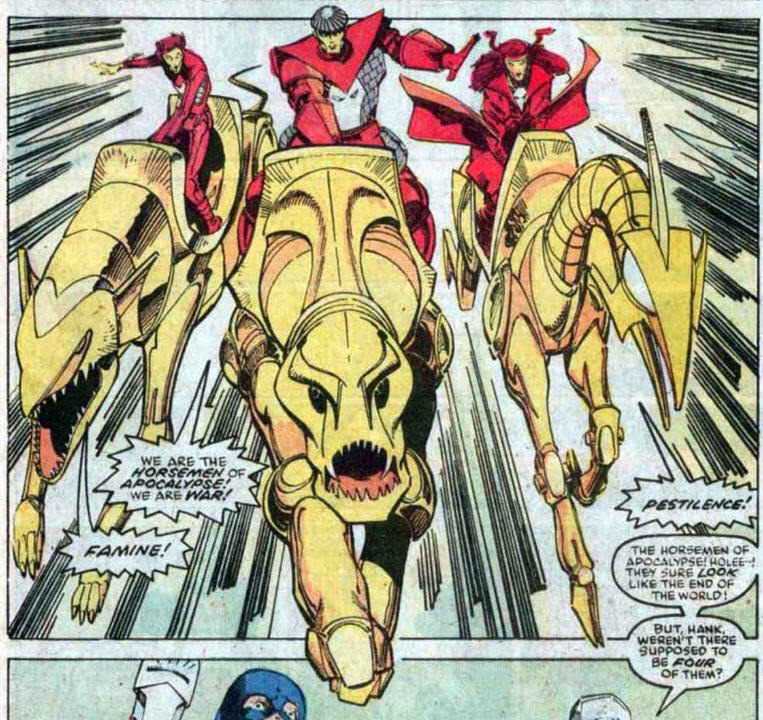 Beast is touched by Pestilence during their fight, infecting him with a disease that will lead him to lose his intelligence the more he uses his strength, a condition that will persist for the next dozen or so issues and, ultimately, lead to the return of his blue and furry look. 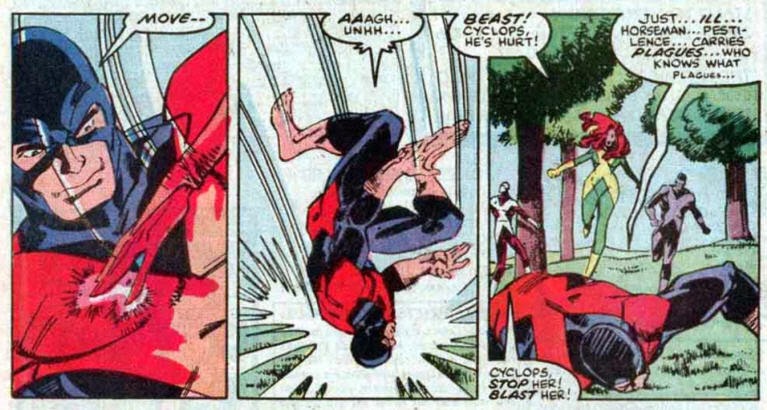 More hints that Angel is the mysterious figure being transformed into Death: Pestilence refers to him as the Wingless Wonder, and he clearly knows X-Factor. It's also established that Apocalypse is drugging him, to make his mind more pliable to Apocalypse's will. 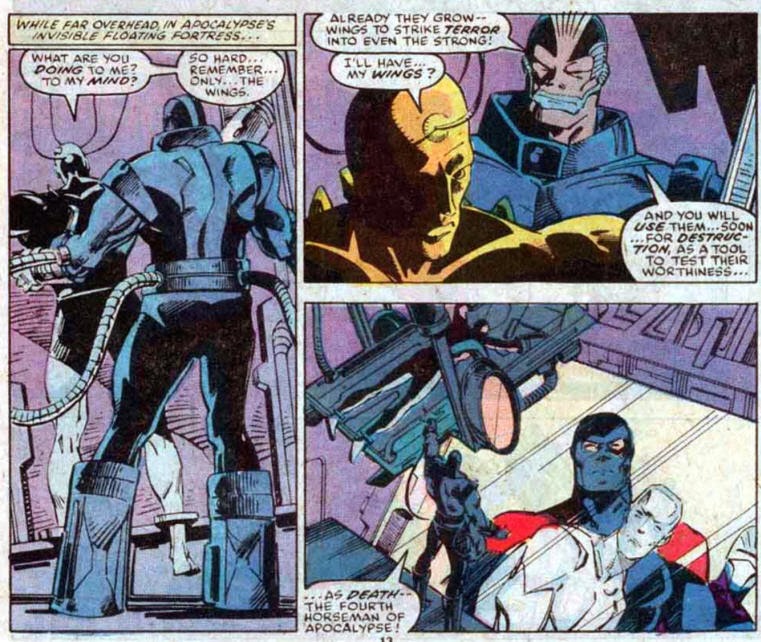 The series gets its first proper corner box on the cover, with the heads of Cyclops, Marvel Girl, Beast and Iceman appearing instead of the various solo figures that had been used in the box previously.

A Work in Progress
Cleaning up the damage from last issue, Scott wonders how Xavier's prized pupils could end up being mutant hunters. From your lips...

Iceman tells an angry crowd to call X-Factor about him, telling Caliban that if people call X-Factor and they don't respond, it'll help discredit the organization.

Trish Tilby pops up, reporting on X-Factor's battle with the Horsemen.

The Awesome and Terrible Power of Cyclops
After realizing he nearly killed Jean last issue, Scott spends most of this issue beating himself up over it, calling himself dangerous and worthless, etc.

Mutants. Deeds. Know Them.
As Iceman, Beast and Caliban search the city for Boom-Boom, onlookers recall Iceman's speech about knowing mutants by their deeds, and point out all the three of them are doing is sulking around in secret identities making a mess, so, not such a great deed. 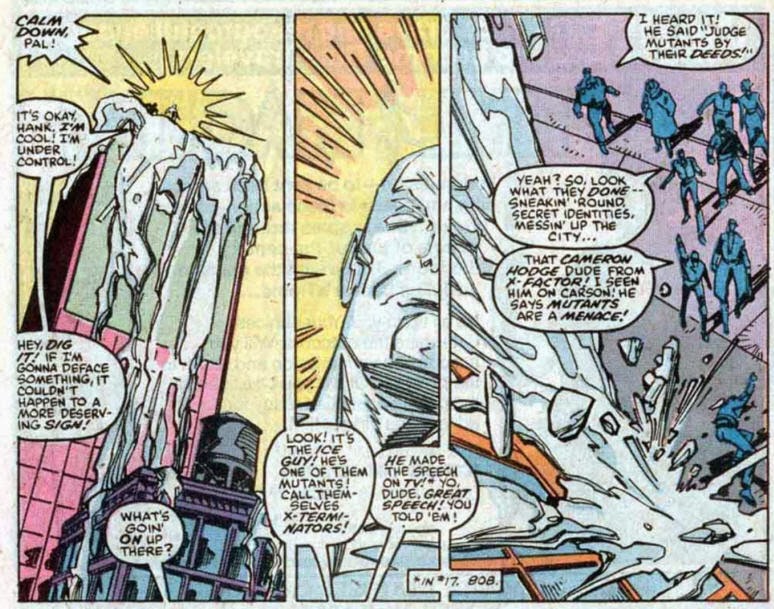 A sentiment that is later echoed by a cop arriving on the scene after X-Factor's fight with the Horsemen, though Cyclops points out Iceman also saved the onlookers from the Horsemen. 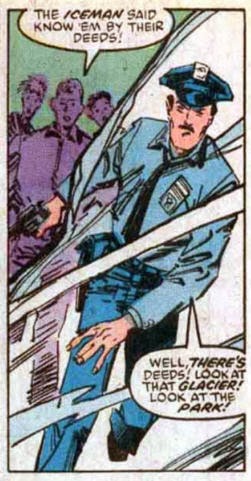 Teebore's Take
Since the beginning of her run, Simonson, taking a page from Claremont's book, has seeded multiple storylines in the book, giving any one of which the potential to rise up in a given issue and serve as the central plot: Cyclops' ongoing angst, the relationship between Jean and Phoenix, Angel's fate, Iceman's amped up powers, Hodge's machinations and Apocalypse's plans. In addition to keeping things fresh, it helps give the book the feeling that each issue is just one piece of a larger narrative puzzle, a feeling more akin to that of Claremont's X-Men and New Mutants that was lacking in the series' early issues. With last issue bringing the Scott/Jean elements to a head and seemingly exposing Hodge's perfidy (at least on some level), this issue puts Hodge aside in order to bring Apocalypse, specifically his Horsemen, to the forefront.

The timing on this is just about right, as the Horsemen have been simmering in the background of the book since issue #10, and here we finally get to see them in action. As with issue #14, this gives Walt Simonson another chance to cut loose, depicting some energetic and creative fight scenes as X-Factor battles the Horsemen, while Louise is careful to give each Horseman a distinct personality, making them more than just generic henchman (a far cry from the Alliance of Evil, Apocalypse's previous flunkies).  It's all well executed and does an effective job of keeping the book's various storylines in play, but frankly, the real entertainment here is just seeing the Horsemen of Apocalypse - a concept I've always loved - in action for the first time.