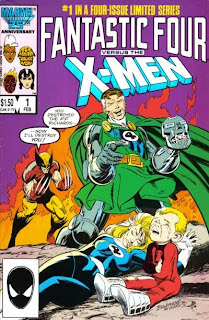 "Are You Sure? / Truth and Consequences / By the Soul's Darkest Light / A Matter of Faith"
February - June 1987

In a Nutshell
The X-Men seek the help of the Fantastic Four to save the life of Kitty Pryde.

Plot
Issue #1: With Kitty's condition getting worse and Moira unable to do anything further, the X-Men reach out to Reed Richards of the Fantastic Four, who possesses a device which may save Kitty, for help. Reed and the rest of the Fantastic Four, including former member She-Hulk, meet the X-Men on Muir Isle to examine Kitty. Reed, wracked with self-doubt following the discovery of an old journal, says he is unable to help her, prompting a fight to break out between the two teams. Issue #2: The fight between the X-Men and the Fantastic Four comes to an end when Dr. Doom, who has been monitoring the X-Men, offers to help Kitty. The Fantastic Four return to New York, where Sue Richards reveals to her teammates that the old journal suggests Reed knew all along that the space flight which gave them their powers would do so. On Muir Isle, the X-Men, though reluctant to put themselves in debt to Doom, agree to let him help Kitty. 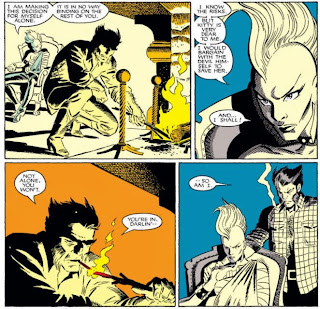 Issue #3: Kitty, now with the X-Men in Doom's country of Latveria and unwilling to see the X-Men at Doom's mercy, decides to let herself die, but the astral form of Franklin Richards alerts the X-Men and convinces her to hold on to her life. In New York, the Fantastic Four go their separate ways, each individually coming to terms with the information uncovered in Reed's journal and deciding for themselves that Reed is incapable of such an act. Coming together, they decide to head to Latveria and save Kitty themselves. Issue #4: The Fantastic Four arrive in Latveria, their arrival leading to more misunderstanding and another fight with the X-Men, which is stopped when Franklin admonishes both teams for acting like children while Kitty is on the verge of death. Inspired by Franklin, Reed and Doom work together to stabilize Kitty's condition, saving her life. Amidst the ensuing celebration, Sue realizes that Doom fabricated and planted the journal to sow discord amongst the Fantastic Four, and warns him about threatening her family, while Franklin and Kitty cement their friendship.

Firsts and Other Notables
As of the fourth issue of this series, Kitty is healed of the injury she suffered in Uncanny X-Men #211, and is no longer in danger of phasing away into nothingness (though later stories will establish that "phased" is now her default state, and she must concentrate to remain solid). It is noted that her full recovery will continue to take time, and she will remain on Muir Isle for the duration of that recovery, before leaving when she becomes a member of Excalibur. 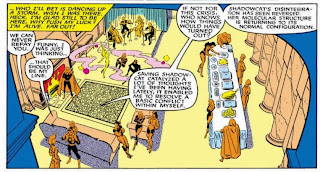 The Fantastic Four spend most of this issue reeling from the revelation, discovered in a seemingly forgotten journal, that on the space flight which resulted in the Fantastic Four gaining their superpowers, Reed intentionally sent the group through cosmic rays with the express purpose of mutating them and granting them superpowers. Reed insists the journal is wrong, but even begins to doubt it himself before the rest of the team determines for themselves that for all his flaws, Reed couldn't have done something like that, and ultimately Dr. Doom is pegged for having fabricated the journal in an attempt to sow dissent among the FF. 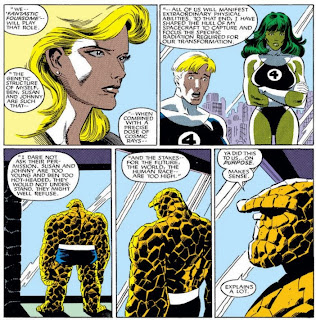 The Chronology Corner
The X-Men are back on Muir Isle as the series opens, and while one might assume that means this series takes place closer to issues #217 and #218, Havok's presence forces it to take place after #219. Since the X-Men were in New York for that issue, they're apparently racking up the frequent flier miles going back and forth between the US and Scotland.

A Work in Progress
In issue #1, Havok, his pants hiked up to the heavens, insists he's paid his dues to the X-Men, while Rogue tells him if he wants a place on the team, he needs to earn it. When the story begins, She-Hulk is preparing to serve as the defense attorney in a mock trial recreation of Magneto's trial from X-Men #200; Magneto's legal status will also play a role in the X-Men vs. the Avengers limited series.

The Doombot seen observing Muir Isle in Uncanny X-Men #217 returns in this series, putting Doom in contact with the X-Men. Doom says that he heard of the Marauders' attack on the Morlocks and sent the Doombot to ascertain how much of the rumors were true. 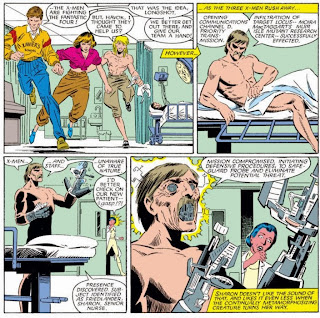 When Mr. Fantastic proves reluctant to use his machine to save Kitty, Rogue suggests simply touching him and absorbing the knowledge necessary to use it herself. Though she is tempted, Storm says the X-Men cannot go down the path of simply taking whatever they need.

At one point Lockheed licks the astral projection of Franklin Richards, and I'm not sure how that's possible. 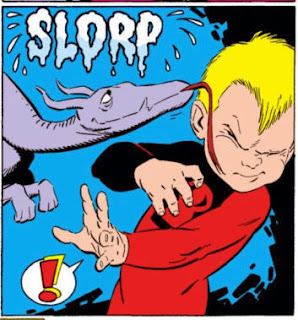 Later, whilst flying to Latveria, She-Hulk asks Human Torch for the lowdown on the Reed/Doom rivalry, yet this story occurs well after She-Hulk's tenure as a member of the Fantastic Four, and it seems likely that is information she would have gleaned at some point during that time.

Sue references the help the X-Men gave the Fantastic Four in X-Men Annual #5.

Issue #4 contains another suggestion that Storm retains some residual power. 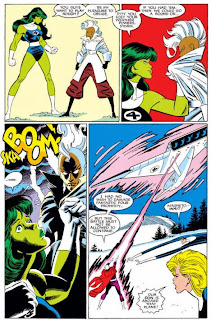 In what is just a fun little moment, Franklin, riding Lockheed, breaks up the FF/X-Men fight in issue #4. 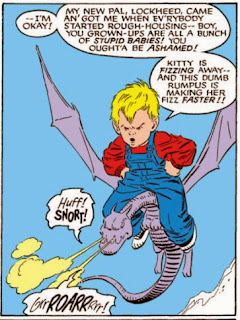 I Love the 80s
Sue wears a handkerchief in issue #1, the better to point out that she's doing womanly chores.

Claremontisms
In issue #4, Franklin when Franklin says hello to Kitty, it prompts a "hi, yourself". 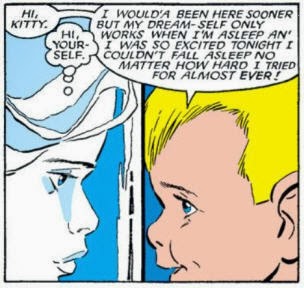 Young Love
Though never directly referenced, it's worth noting that when last they met, Dr. Doom proved himself to be sweet on Storm, which is perhaps informing his offer of aid to the X-Men in this series.

Dazzler refers to Longshot as "sweetheart", one of the earliest indications of their eventual romance.

Human/Mutant Relations
At one point, Human Torch angrily refers to the X-Men as "muties". 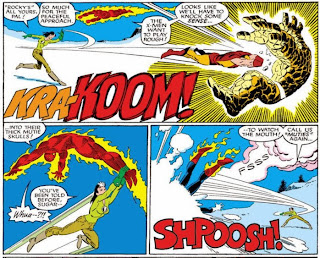 Teebore's Take
Though written by Chris Claremont and notable for healing Kitty Pryde of the injury she sustained during "Mutant Massacre" (and thus putting her in position to be used in a series again), this actually reads like much more of a Fantastic Four story than an X-Men one. It is the Fantastic Four characters who go through a character arc in the course of the four issues (granted, they come out the other side the same as when they started, but still), while the X-Men do little more than fight the FF and wait for Doom/Reed to save Kitty. There's some good material involving Kitty (particularly the bit where she decides to let herself die rather than put the X-Men in Doom's debt, a nice indication of where her character is at relative to the more morally ambiguous X-Men that emerged from the massacre) as well as her interactions with Franklin (which are, frankly, the best part of the series, coming in at the level of "just twee enough"), but otherwise, this is an FF story in which the X-Men guest star.

Fortunately, the execution is good enough to not mind that fact. Speaking as someone who knows the Fantastic Four fairly well but is by no means an expert on the characters, Claremont seems to have a pretty good handle on them, able to write them (and Doom) with the same confidence as the X-Men characters. The plot is built on some fairly large coincidences (the X-Men reaching out to Reed, Doom monitoring the X-Men and Sue tripping Doom's "journal trap" happening all at the same time but independent of one another) but there's enough enjoyable character bits and genuine sentiment sprinkled throughout the series that it's easy to overlook those coincidences. The art, from Join Bogdanove, is solid and well-suited to the material, with Terry Austin on inks helping keep Bogdanove's pencils from getting too cartoony or comically exaggerated (as they sometimes can). The end result is a story that isn't exactly required reading (unless you're really interested in the details of how Kitty gets healed) in terms of the ongoing X-Men saga, but is well-crafted enough to still be enjoyable on its own merits. For an ancillary limited series featuring a ton of characters, that's not too shabby an accomplishment.

Next Issue
On Friday, X-Factor meets the Inhumans in X-Factor Annual #2, and next week, we look at the second of the "versus" limited series, as the X-Men take on the Avengers in X-Men vs. the Avengers #1-4.
Newer Post Older Post Home
Posted by Austin Gorton at 12:00 PM