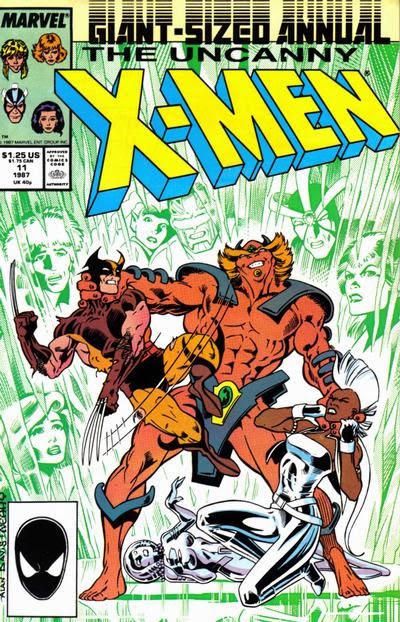 In a Nutshell
The X-Men confront their greatest desires in order to defeat a powerful alien.

Plot
Late at night, Wolverine drunkenly stumbles home, having been out "celebrating" the anniversary of his aborted wedding to Mariko. Later that evening, the X-Men, along with their guests Captain Britain and Meggan, are attacked and defeated by a powerful alien named Horde. He teleports them to a massive citadel and tasks them with entering the citadel and acquiring for him a crystal which resides inside that will grant him the power to rule the universe. Left with no choice, the X-Men enter the citadel. They quickly realize the citadel defends itself by making the hearts desire of those who enter real. Rogue is quickly lost as she becomes a Southern belle, followed by Havok, who is transformed into a star and freed of being responsible for his massive power. Longshot, having no desires, is absorbed by the citadel, while a despondent Dazzler is overwhelmed by visions of what her life could have been: successful attorney, superstar performer, or homeless bag lady. 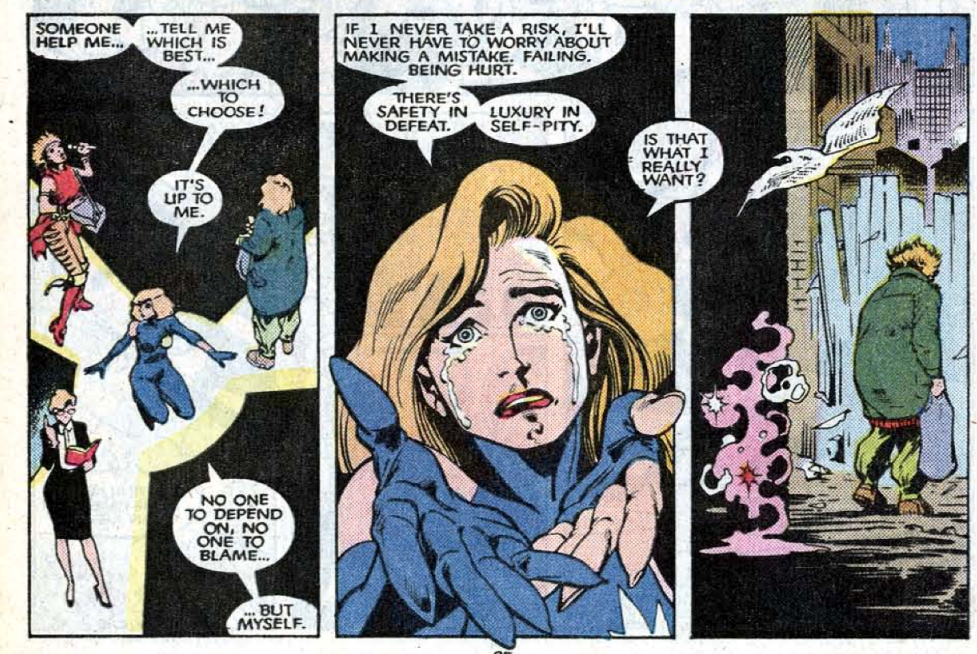 Captain Britain succeeds in bringing the X-Men to the crystal by smashing through the floor of the citadel, but then he and Meggan are lost in visions of domestic bliss after Psylocke chooses the path of the warrior and transforms into a being composed of metal. As Psylocke leaves to confront Horde and buy the X-Men time, Storm and Wolverine are confronted by their desires, a life of carefree adventure with Yukio and being reunited with Mariko, but are able to just barely resist their lure. Suddenly, Horde appears with the corpse of Psylocke, and Wolverine attacks him. Horde is able to overpower Wolverine and rip out his heart, but a drop of Wolverine's blood lands on the crystal. Wolverine is reborn, with the power of the crystal at his command. He kills Horde, then considers using his power to make humanity better, but realizes such an act would be fundamentally wrong, and destroys the crystal and the citadel with it. The X-Men awaken in the mansion and discuss their "dreams", memories of which quickly fade, with the X-Men never realizing they have helped humanity pass a cosmic test which assures its continued growth and evolution.

Firsts and Other Notables
This issue is most notable for the scene in which Wolverine is, nearly-instantaneously, resurrected entirely (including his adamantium skeleton) from a single drop of his blood by his healing factor. Often pointed to as a justification for the extreme power level the character will eventually exhibit, most of the people doing so seem to miss (or overlook) the fact that it only works here because Wolverine is super-charged by the crystal. 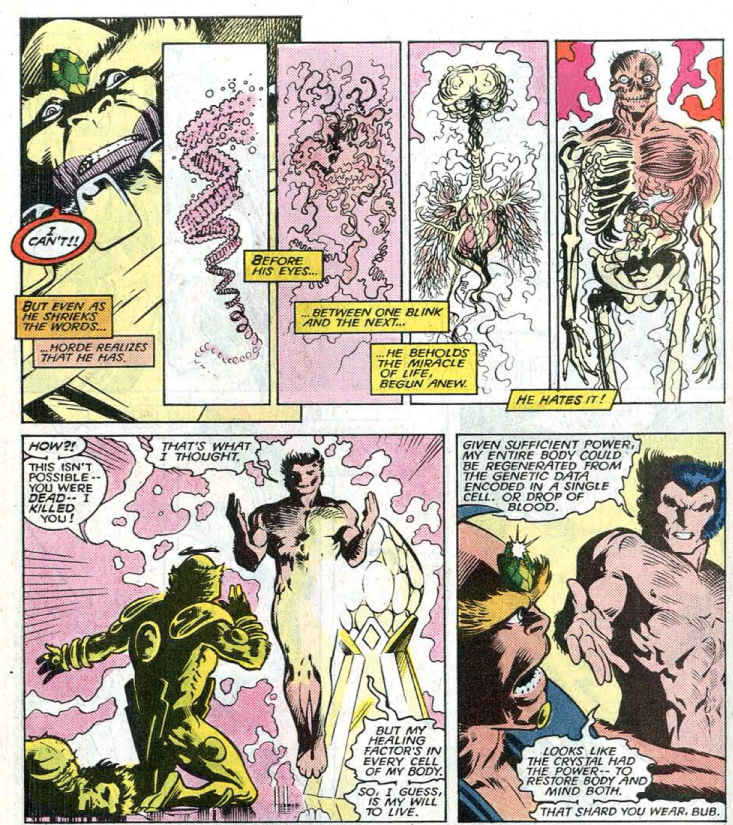 Alan Davis, after drawing a pair of New Mutants annuals, lends his talents to this issue.

The villain of the story is Horde, a mutant alien who strong-arms the X-Men into entering the citadel and stealing the crystal for him. This is his first, and to date, only appearance.

Captain Britain and Meggan guest star in this issue, for seemingly no reason other than to give Alan Davis another chance to draw them (I mean, in-story, they're visiting Captain Britain's sister Psylocke, but there's nothing about the story or their contribution to it that required that visit to appear here, other than having Davis on hand to draw them).

A Work in Progress
Longshot apparently sleeps in his skivvies. 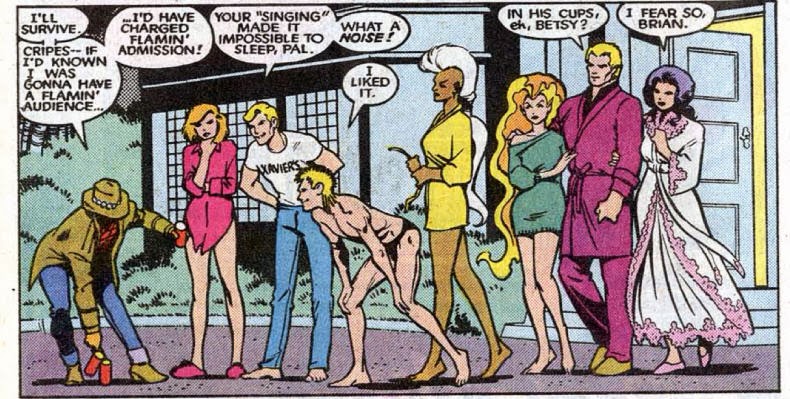 Psylocke expresses to Captain Britain her desire to prove herself a warrior, which later plays into her fantasy inside the citadel. 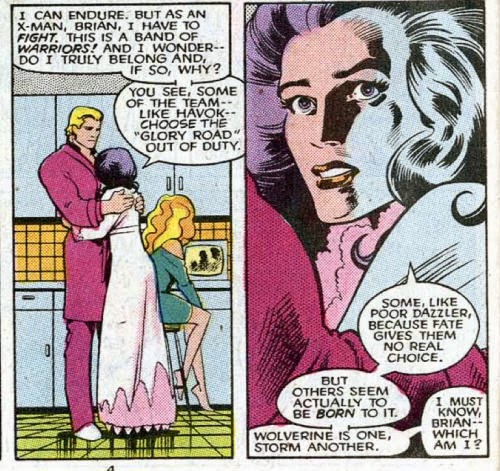 Rogue has seemingly become the X-Men's de facto grease monkey in the absence of Banshee and Nightcrawler, as she opens this issue once again in the hangar. 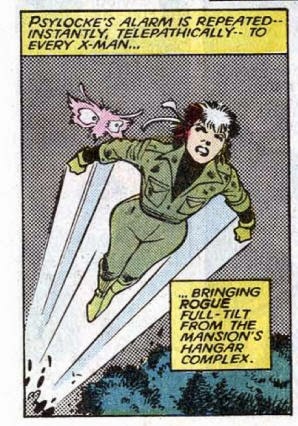 The fact that Longshot has multiple hearts is referenced. 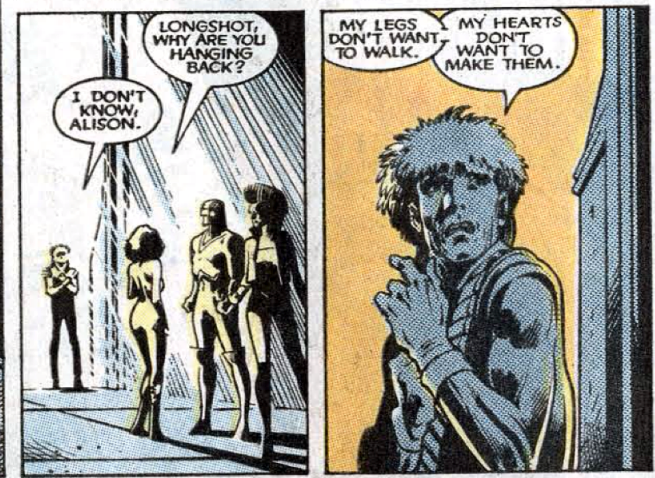 Psylocke notes that of all the X-Men, Rogue and Longshot are the hardest for her to read telepathically.

The issue ends with the narration revealing that the statues outside the citadel represent the races which entered the citadel and failed its test, and thus were marked as unworthy of further evolution, whereas humanity will continue to grow and evolve. While the innate awesomeness of humanity is a pretty standard trope in comics (and sci-fi in general), the fact that the alien Skrull and Kree are represented amongst the statutes is notable, as their stunted evolution relative to humanity figures in many stories involving them. 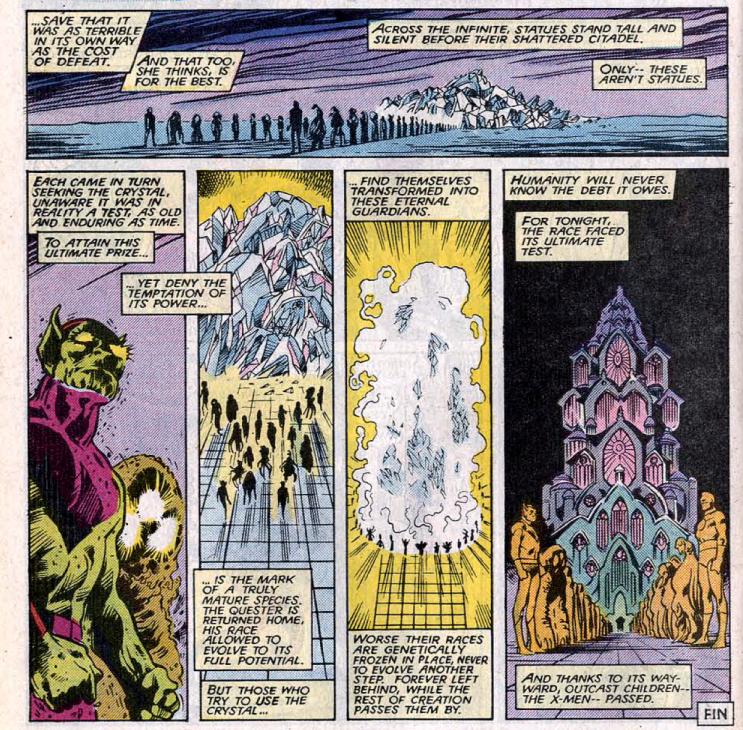 The Awesome and Terrible Power of Cyclops Havok
Havok pulls a Scott and complains about always having to struggle to control his power, with his hearts desire to become an actual star where he no longer needs to worry about his energy output. 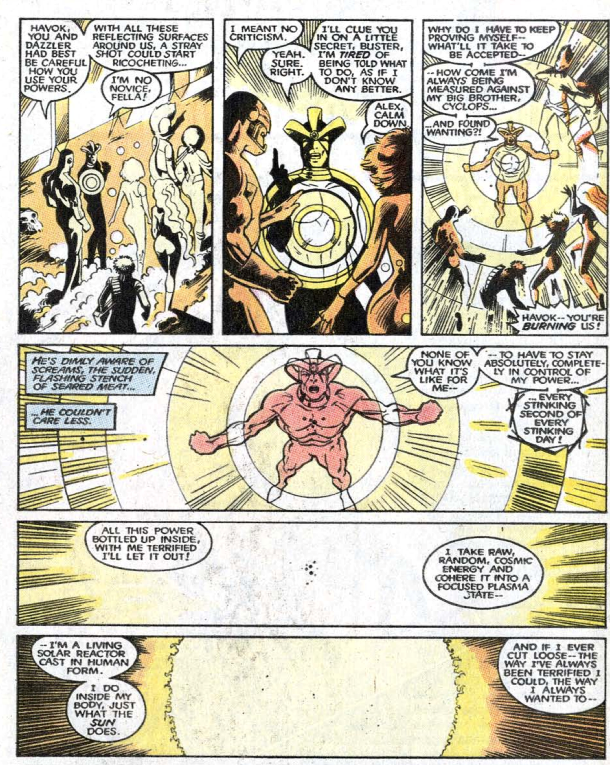 The Best There is at What He Does
Wolverine, in celebration of the anniversary of his aborted wedding to Mariko, gets drunk, though he notes that because alcohol is essentially a poison, he has a difficult time getting drunk due to his healing factor. 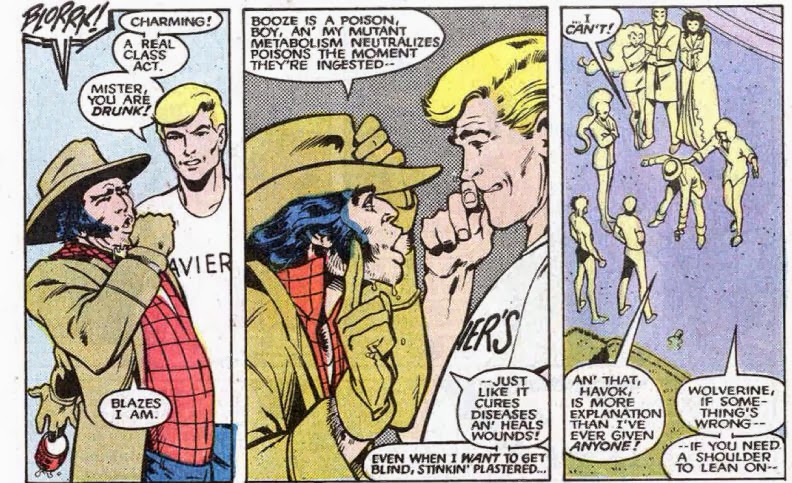 Like a Phoenix, From the Ashes
As Wolverine claims the crystal, he becomes one with the universe (looking especially Hugh Jackman-esque in the process), and wonders if Jean felt the same thing when she was Phoenix. 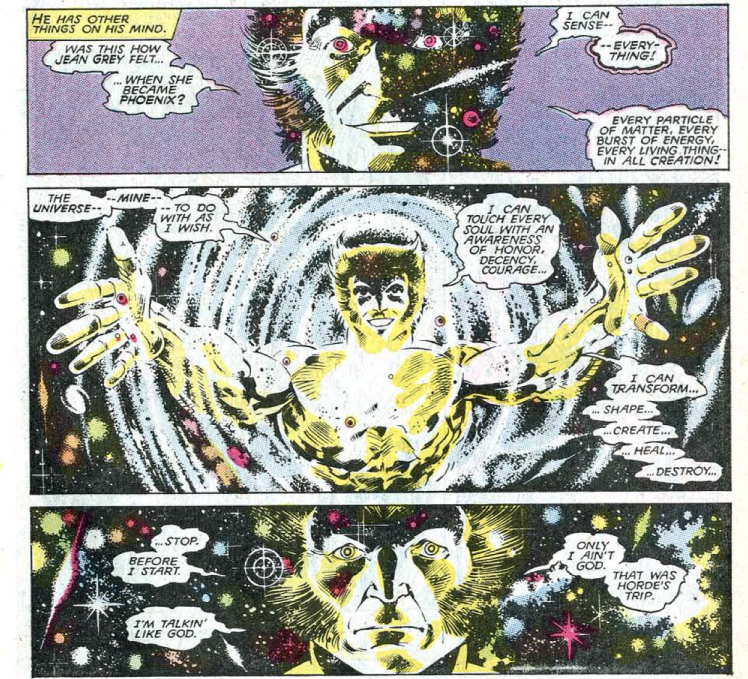 Young Love
This being an annual and whatnot, the villain is of course especially smitten with Storm. 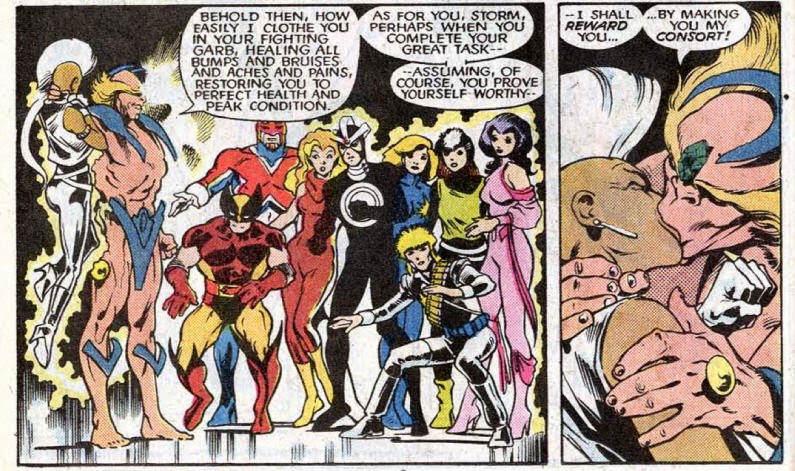 Longshot and Dazzler grow closer, as Dazzler looks to Longshot for comfort, then is especially horrified when Longshot is absorbed by the citadel.

Teebore's Take
This is a fun little story, nothing groundbreaking or exceptional, but well-crafted genre work nonetheless. Horde, as the central villain, is hardly inspired, in either design or motivation, but he's just a means to get to the real bulk of the story: putting the X-Men face to face with their desires, and seeing how they react (Captain Britain and Meggan are also largely superfluous to the story, but certainly don't harm anything by their presence). It's a pretty standard narrative device, especially in comics, but its effectiveness here is elevated by the gorgeous Alan Davis art, as well as the fact that this crop of X-Men are still mostly new and relatively unknown characters, making their interactions with the crystal more intriguing (Longshot's selflessness and Dazzler's reaction to the citadel absorbing him are particularly engaging). Drawn by someone else at a different time in the book's history, this story would probably struggle to get above the level of "disposable fluff" at which so many annuals fall. But while it's not quite on the level of the preceding two Art Adams-drawn annuals, it definitely continues the title's recent hot streak relative to the first six mostly forgettable annuals.

Next Issue
It's back to business as usual, as Uncanny X-Men #220 sends Storm searching for Forge, New Mutants #55 welcomes aboard Louise Simonson, and X-Factor #19 unleashes the Horsemen of Apocalypse.
Newer Post Older Post Home
Posted by Austin Gorton at 12:00 PM