In a Nutshell
Storm, hoping to regain her powers, sets off in search of Forge.

Plot
In the Rockies, Storm meets with Wolverine, telling him she has decided to seek out Forge's help in restoring her powers. She asks Wolverine to lead the X-Men in her absence, but he refuses. She insists, and eventually he reluctantly agrees. Later, Storm stands outside Forge's home in Eagle Plaza, in Dallas. Entering, she finds it deserted and the entire building without power, forcing her to take the stairs to Forge's penthouse. As she climbs, Naze, Forge's one time mentor, senses her presence, and prepares a welcome. Storm emerges into Forge's penthouse to discover his holographic systems and defenses have been activated. She fights her way through the building as scenes of Forge's past, including his time with Storm, play out around her. 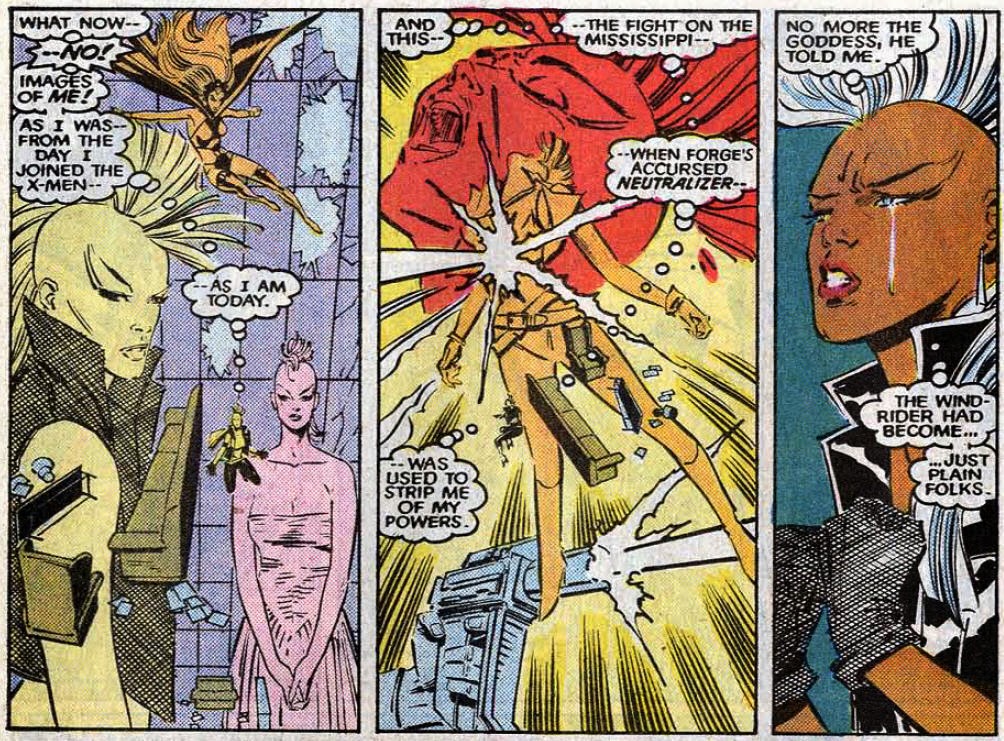 Reaching his control room, she discovers a disheveled Forge hooked directly into his machines, but this too turns out to be an illusion, and Storm deactivates the system. Naze then appears, telling Storm he activated the defenses to ensure she hadn't lost her edge, then explains how Forge's love for her, and her rejection of him, has turned him insane, making him prey for the Adversary, the evil being whom Forge was trained from birth to combat. He begs for Storm's help in finding and saving Forge. The next morning, Storm accepts that she holds some responsibility for Forge's condition, and is honor bound to help him. She tells Naze she will stand with him until the end, words which bring a sinister smile to his face.

Firsts and Other Notables
Storm takes a leave of absence from the team this issue to hunt down Forge, having decided to swallow her pride and ask for his help in restoring her powers (which will make her a more effective leader), though she isn't considered to formally leave the team.

She taps Wolverine to fill-in for her as team leader, and though he gives the usual argument about not being much of a leader, she insists, pointing out that nobody else on the young (in terms of how long they've been X-Men) team is fit for the job, and he ultimately accepts, beginning one of the only tenures in the book's history in which Wolverine is leader of the X-Men (at least, until he leads an iteration of X-Force and then starts his own school, but that's a ways off). 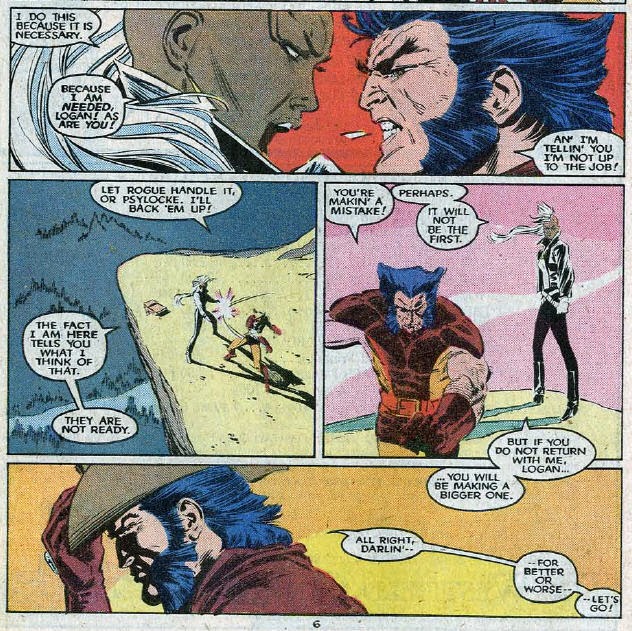 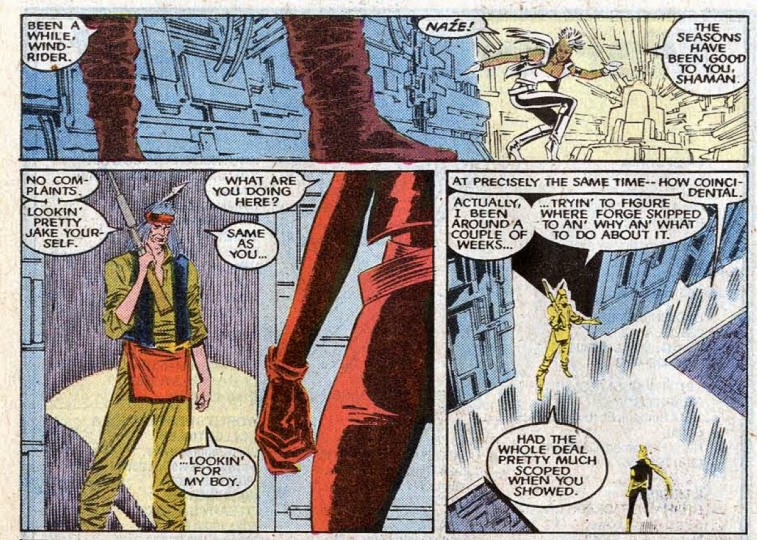 Marc Silvestri returns to pencil this issue, and if you don't consider issue #218 to be the start of his run on the book, then it begins here, as he will remain the book's regular penciller for the next few years (albeit with frequent fill in artists).

The cover corner box heads have been updated, removing Nightcrawler, Colossus and Shadowcat, though Dazzler is still missing and Magneto's role on the team is more or less over at this point.

The Chronology Corner
Between this issue and the next, Wolverine appears in Daredevil #248-249 and Alpha Flight #52-53, none of which feature enough significant action/developments involving Wolverine or the X-Men to warrant their own posts, though the events of Alpha Flight #53 do confirm for Heather Hudson that her husband wasn't involved in the creation of Wolverine, and also features some early Jim Lee art.

A Work in Progress
Storm mentions that she tried calling Forge, prior to going to Eagle Plaza, but the phone was disconnected, suggesting at least one X-Man knows how to work a telephone.

While watching a holographic flashback of Forge's time in Vietnam, Storm notices there are somehow demons present, a bit of foreshadowing regarding Forge that will be revealed in "Fall of the Mutants". 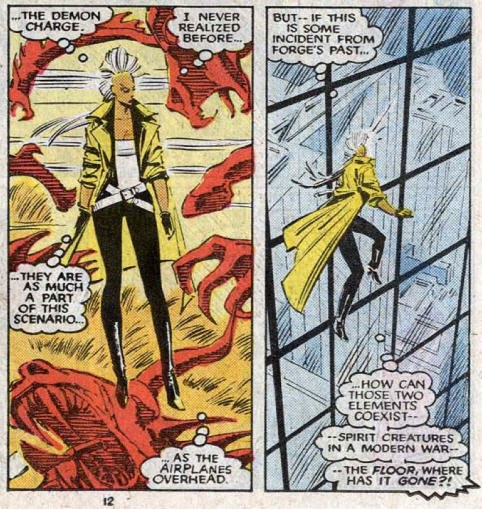 I Love the 80s
Storm tells Naze he can go to "Hades", rather than Hell, a popular swap made in comic around this time, presumably to make them more kid-friendly (the Classic X-Men reprints of the old Claremont/Byrne issues published around this time would frequently make that change in the reprinted story). 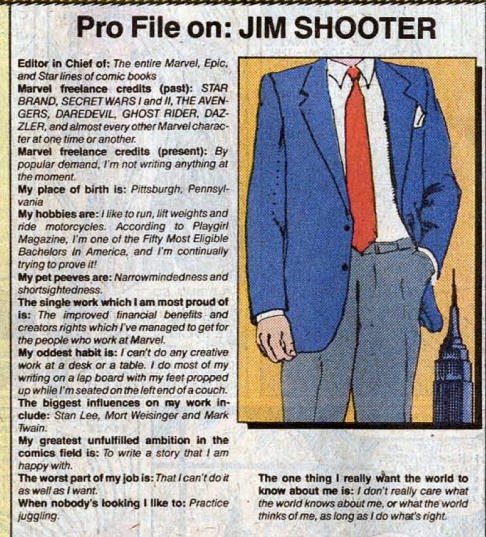 It's in the Mail
The letters page is back, discussing issue #213 and annual #10.

A letter response confirms that annual #10 takes place before "Mutant Massacre", suggesting that Longshot was away during the massacre due to events that will be detailed in a future story (to my knowledge, that story has never been told). An 80 page graphic novel follow-up to Longshot's miniseries, fully painted by Art Adams, is also mentioned, but I don't believe that ever saw print either.

Marc Silvestri on being assigned Uncanny X-Men
"They offered me that gig and right away I said, 'sure, I'll take it.' I jumped at the chance. That was when X-Men was still Mount Everest. If you got to do X-Men, you were at the peak of your career. Spider-Man and Hulk might have been better known titles, but everyone in the business knew that X-Men was the comic you wanted to be on. I felt great. I thought, 'wow, I've made in comics.' It was like I joined this exclusive club, the same club John Byrne had belonged to, and I was working with Chris Claremont. At the time, you're working with Chris, you're working with the best guy out there, right? He was certainly the number one writer in comics in those days."

Teebore's Take
This issue sends Storm, finally willing to swallow her pride, in search of Forge and allying her with Naze along the way. In the process, it begins Storm's quest to find Forge and with it, the book's march towards its next big storyline, "Fall of the Mutants". It also marks the debut of Marc Silvestri as the book's new regular penciller (at the very least, it is the beginning of several consecutive issues drawn by him), and that, along with Storm's story, mark an unofficial ending to the period of relative (and intentional, at least story-wise) disarray that has existed in the book since the conclusion of "Mutant Massacre".

But that feeling of the book having turned a corner, narrative-wise, only comes via hindsight; for the moment, there's not much to this issue. Storm puts Wolverine in charge of the X-Men then goes to Forge's house, takes a trip down memory lane thanks to Forge's holograms and meets up with Naze. It gives Silvestri a chance to show off his chops by rendering some moments from Storm and Forge's past (mostly culled from "Lifedeath") and it kicks off a new storyline for Storm, but that's about it, at least until we see how the story started here plays out.

Next Issue
Tomorrow, Louise Simonson and Bret Blevins come aboard in New Mutants #55, followed by the debut of Apocalypse's Horsemen in X-Factor #19. Next week, the Marauders return in Uncanny X-Men #221.
Newer Post Older Post Home
Posted by Austin Gorton at 11:00 AM