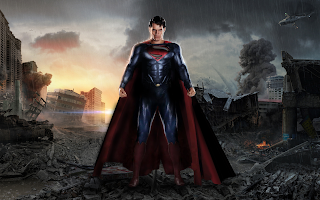 I found this story about Man of Steel thanks to a Cracked.com article I was reading. Yeah, Man of Steel is a movie that is over sixth months old but I still get annoyed when I’m reminded of it. It’s not even like I despised the movie. I liked some parts but I just thought the movie overall was very flawed. Then I read this relatively small story about an interview with director Zack Snyder and suddenly my gears were grinding like crazy. Here are the five things that bothered me the most in the article:

5,000 People Died: That's right, 5,000 people. To put that into perspective, that's more deaths than the Unibomber bombings, the Oklahoma City bombing, the World Trade Center bombing, the 1996 Olympics bombing, the Boston Marathon bombing and 9/11 combined. Basically, Superman is partially responsible for one of the greatest tragedies on American soil.

Now Zod was going to destroy the world so I guess you could say they're acceptable losses; 5,000 lives for 7 billion. Then again, that's the kind of logic usually reserved for villains. You could say this movie is trying to be realistic (yes, the movie about a flying alien that shoots lasers from his eyes is trying to be realistic) but this is Superman we're talking about. If anyone is capable of doing it all it's him. Frankly, I expect him to be able to save everyone. If he fails to save one person's life it should be a big friggin' deal let alone 5,000 people's.

I suppose the other argument is that Superman is new to the game and doesn't understand how to best utilize his powers. You may be right but that's a fault of the script. I don't care how en vogue gritty, dark superheroes are I don't want to see a Superman movie where his battle against evil results in the death of 5,000 people.

"No, there's real consequences": Yes, I know, in the real world there are real consequences. Two super powered beings pummeling each other in a major city will likely result in numerous casualties. But isn't that what makes Superman so appealing? He can battle evil without consequence. As I said above, he can (most of the time) save everybody.

Shouldn't Superman be fun? Don't we want to be Superman (or Superwoman) because it would be fun? I'm not saying a Superman movie should ONLY be about fun and there isn't room for tragedy and sadness. I understand the nature of the hero's journey. But when I walk out of the movie the first thing I should say is "Man, that was fun!" Instead, I just think about the crushing burden of what it means to be Superman and the tragic consequences of said power. Yeah...not fun.

“If you look at Avengers, they like trashed New York City, and no one even mentions the fact that there’s thousands of people dying in there.”: Did Zack Snyder even see the Avengers? The end of the movie (a montage of news reports) is almost exclusively about the damage caused to New York. They site that, thanks to the Avengers, casualties were kept to a minimum. I suppose you could say this was unrealistic and didn't accurately reflect what the casualties should have been considering the devastation we saw in the movie. I mean, who isn't looking for complete downers of an ending and large death tolls from their superhero movies? But, regardless, to say there’s no mention of the destruction in New York is completely false.

“And I feel for me that’s why it’s heavy at the end of it. There’s like sadness to the end of the movie. It’s not just fun to crash around in a city.”: Oh...I was wrong. Superman movies should be SAD not fun. Now I understand.

“There’s a human price. And I think that’s the thing that weighs on Superman.”: Does it? Despite all the dark, gritty heaviness that oppresses this movie one thing I notice a distinct lack of is the weight of all the casualties that occurred in the final battle on Superman. SPOILER ALERT: The only emotion he shows during the devastation of Metropolis is for one single death, Zod's! The main villain of the movie who wanted to destroy all humans on Earth!

After such a horrific event all we see is Superman lament the fact that he was forced to kill (despite the fact that his non-killing policy was never established in the movie but now I'm piling on). Then Superman flies off to his Fortress of Solitude. For all of Zack Snyder’s talk about the Avengers not addressing the devastation that occurred in their movie, when does Superman actually address the devastation that occurred in his? I would say that Man of Steel ending with Superman dwelling on all the deaths that had occurred would be too much of a downer but I'm starting to think that was Zack Snyder's intention for this movie.
Newer Post Older Post Home
Posted by Dr. Bitz at 11:48 AM

Email ThisBlogThis!Share to TwitterShare to FacebookShare to Pinterest
Labels: Around the Web, Movies, Supeman