As hosts, Tina Fey and Amy Poehler killed it once again.  We're hosting for the second time because this is Hollywood, and if something kind of works, they'll just keep doing it until everyone hates it'

Nobody in the TV world takes the TV Golden Globes very seriously (because the HFPA really doesn't), but it was still nice to see Amy Poehler win for her work on Parks and Recreation, making the HFPA the only major awarding body to recognize that excellent show.

Very surprised by both Andy Samberg's and Brooklyn Nine-Nine's wins. I mean, I like that show, it's steadily improving and I'm glad that these wins should (hopefully) lock it in for a second season, but I don't think it's the best comedy on TV right now, even amongst the other Globe nominees (that would be Parks and Rec).

Someone needs to work on the seating chart for next year. I think *I* could have gotten from my couch to the podium faster than some of the winners.

The Simpsons: Married to the Blob

So was this one of The Simpsons occasional but infrequent status quo changes? Will Comic Book Guy remain married in future episodes, and Kumiko return as a recurring supporting character? I hope so, as this was probably the most I've enjoyed Comic Book Guy in many, many years. Even moreso than most of the Simpsons supporting characters, he started out as little more than a caricature, and he's only become louder and more broad as time has gone by, despite occasional attempts to flesh out the character. But he seemed much more restrained this episode, like an actual person with Comic Book Guy's tendencies instead of a shrill joke about snarky comic book fans and nothing more. I hope this version of the character sticks around.

I also appreciated that the Miyazaki homage actually served a purpose to the plot, rather than existing just for the sake of homage (or as a couch gag).

Nice to see the rival comic book shop referenced again, as the opening act of the episode which debuted it ("Husbands and Knives", as Matt Groening helpfully reminded us via footnote) remains one of my favorite sequences from the last ten years of the show.

Per the credits, that was actually Harlan Ellison himself, voicing the rant that was one of my favorite parts of the episode. Good get, show.

Finally, I would totally watch a regular Radioactive Man cartoon if it was anything like the one which opened the episode.

Once Upon a Time: Dark Hollow

I'm torn: on the one hand, I'm glad the two hipster doofuses introduced in this episode turned out to be actual characters, because I'm not sure I could stand watching them recur as attempted villains for multiple episodes. On the other hand, now that they've been revealed as Michael and John of Peter Pan fame, it means these hipster doofuses will be sticking around for awhile.

Something that just occurred to me this episode: if mermaids can travel between realms with apparent ease, and pre-Storybrooke Rumpelstiltskin was all about searching realms for Baelfire, why didn't he just coerce a mermaid to search the realms for him, or just transform himself into a merman or something?

This episode established it's been five days since Gold and the Charming Gang headed into Neverland, meaning Regina was rounding up in her "one week" comment last episode (or the mayoral Regina thinks in terms of five day work weeks...) and that John and Michael wandered around a town particularly sensitive to the presence of outsiders at the moment for five days without anyone noticing them.

Along those lines, how is it that John and Michael are both older than Wendy, yet not so old as to be dead? If the idea is that Wendy hasn't grown up because she's been Pan's captive, fine, but then, if time has passed normally for John and Michael, they should be over a hundred years old. But they're not, which means that when Baelfire landed amongst them, it must not have been in Victorian England, even though it sure looked liked it...

Henry remains a blithering idiot, falling completely for everything Pan is selling. And yes, Henry, that rock that looks like a skull is indeed Skull Rock, you friggin' moron...

Arrow Season One (episodes 1-11)
Having finished the first season of X-Files, I've moved on to the first season of Arrow. Eleven episodes in it's pretty much Batman Begins plus Revenge and a better-executed Smallville, and that's a good recipe for success in my book. While it's not perfect (I have a hard time caring about Oliver's relationship with his mom when his mom is, you know, evil, and the island flashbacks are beyond tedious), I'm genuinely surprised at how confidant a show it is, and how much I'm enjoying it already.

I'm particularly impressed at the way it manages to sidestep or subvert certain genre expectations. When Oliver was saddled with Diggle early in the show, I figured we were in for at least half a season of Oliver dodging his bodyguard and narrowly avoiding his secret getting out, but by the third episode, Oliver had revealed himself to Diggle and set him up as his Alfred (which was something the show needed - someone in the know that Oliver can talk to about his mission). Later, there was the episode where Oliver let himself get caught by the cops as part of an elaborate plan to allay any suspicions that Oliver's return and the Hood's debut were in any way related. And, of course, the show ignored the urge to go down the "evil stepdad" route with Walter, much to its credit.

Then there's the comic book references: in eleven episodes, we've already gotten Deadshot, Deathstroke the Terminator (I assume, from the look), Huntress, Firefly and Merlyn (who is rightly positioned as the show's Big Bad for the moment), all of whom are recognizable relative to their comic book counterparts yet still sensibly fit into the world of the show, a balance it took Smallville far too long to reach (if it ever even did).

A relatively-low key one hundredth episode, but one which easily managed to find room for appearances from some of the show's Springfieldian supporting players (Councilman Dexhart, Shauna Malwae-Tweep, Perd Hapley, Jean-Ralphio) while also setting Leslie and Tom up for the next stage in their professional lives.

Hiring Jennifer Barkley to give Leslie the tough love she needed to hear was indeed a great present from Ben, and it was interesting for the way it almost metatextually addressed the way Leslie's aspirations have become bogged down in local politics. This is a character who early in the show's run spoke seriously about running for president, but spent the last few seasons (realistically, granted) fighting for a simple local government office. I'm eager to see if and how Leslie's grander ambitions, as suggested by Jennifer, are addressed in whatever time the show has left.

Enlisted: Pilot
I didn't love this as much as most of the critics have, but it was still relatively funny, and there's definitely potential in the premise/cast. 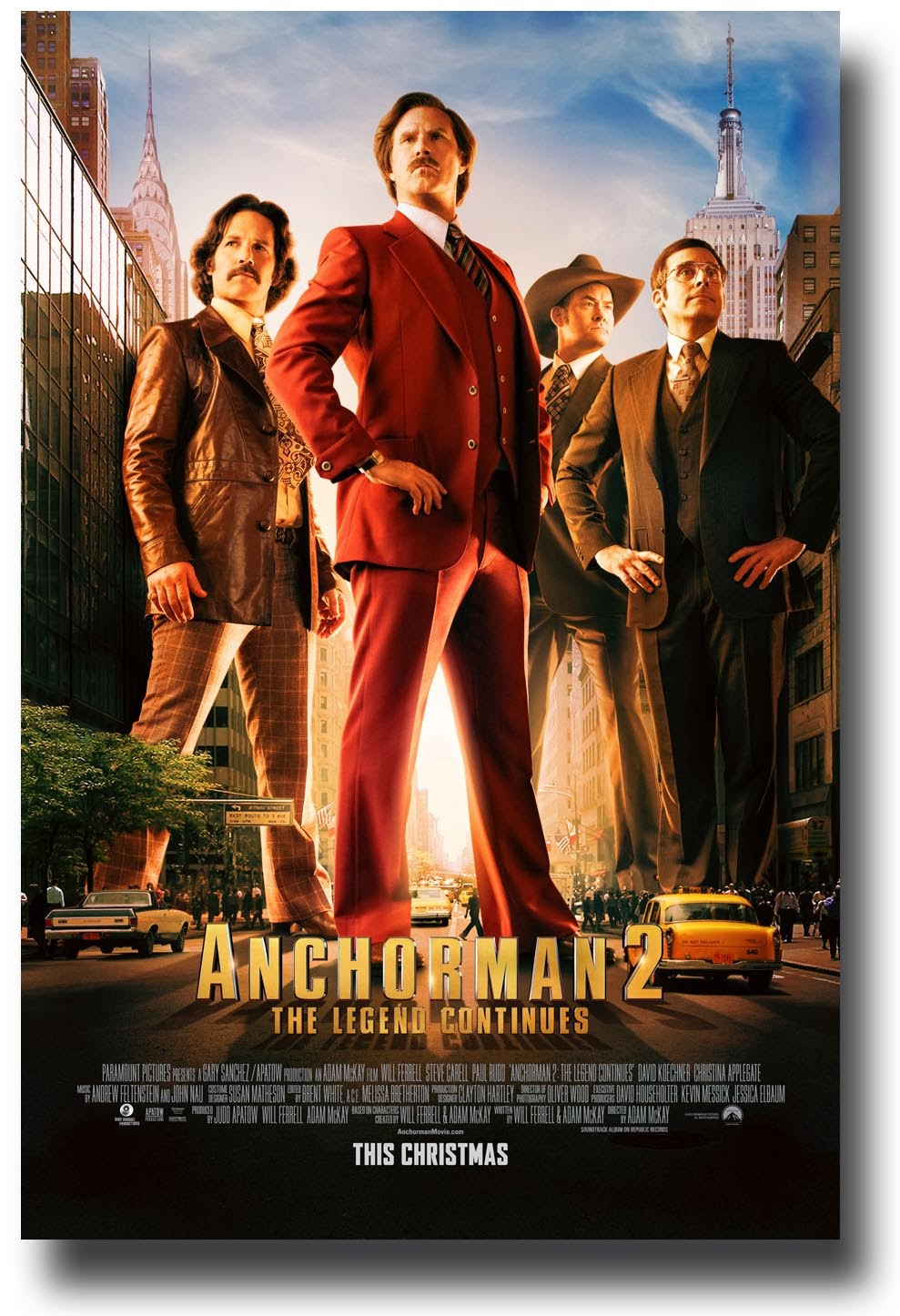 Not as good as the first one, but still reliably funny. Definitely a film where the whole isn't quite the sum of its parts.

After the prologue, I was worried we'd seen the last of Christina Applegate, and that said prologue constituted her entire contribution to the film. So I was quite pleased when I turned out to be wrong and she proved to play as large a role in the story as the rest of the supporting cast. It just seems like such an easy, cliche thing for a comedy sequel to do (write out the previous female lead) that I'm glad they didn't go that route.

I could have done without the entire Steve Carell/Kristen Wiig storyline.

Quotable Quotes
The Golden Globes
Tina: Meryl Streep, so briliant in August Osage County, proving that there are still great parts in Hollywood for Meryl Streeps over 60.”

Tina: Matthew McConaughey is here. For his role in Dallas Buyers Club, he lost 45 pounds, or what actresses call "being in a movie."

Amy: One of the most nominated films this year is 12 Years a Slave. I loved 12 Years a Slave, and I can honestly say that after seeing that film, I will never look at slavery the same way again.
Tina: Wait — how were you looking at it?

Jim Carrey: "Dying is easy, comedy is hard"… I believe it was Shia LaBeouf who said that.

Ron: I would love it if you ran an insane campaign and basically turn it into a joke. But that probably means you probably shouldn’t do it.
Leslie: Andy?
Andy: I don’t know Leslie; it seems risky, and I’d hate to see you go through another tough fight. But I could be wrong. I haven’t pooped in three days.
Newer Post Older Post Home
Posted by Austin Gorton at 12:00 PM