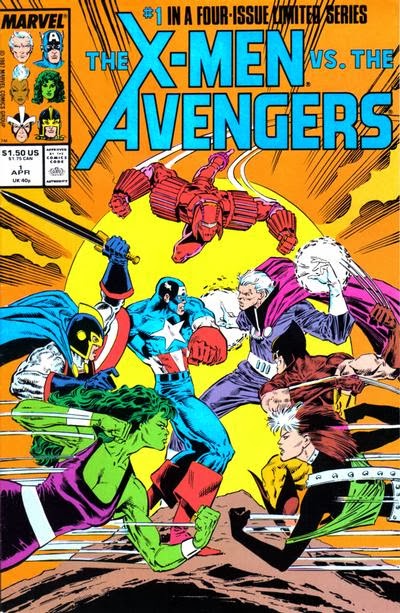 In a Nutshell
The Avengers, the X-Men and the Soviet Super-Soldiers battle over Magneto.

Plot
Issue #1: As fragments of Asteroid M come crashing to Earth, Magneto leaves the X-Men to investigate one of the crashes in Kampuchea. The Soviet Super-Soldiers, hoping to execute Magneto for his crimes against Russia, and the Avengers, hoping to capture Magneto and bring him to trial before the Soviets kill him, track him down. The Avengers arrive first and arrest Magneto, but the X-Men, who followed Magneto themselves, intervene, just as the Soviets arrive. Issue #2: In the ensuing melee, Magneto and the X-Men manage to escape, with Magneto retrieving his helmet and other equipment from Asteroid M before setting explosive charges, believing the base to be too dangerous to fall into the wrong hands. The Avengers defeat the Soviets then confront Magneto once again, though the ensuing explosion allows him to escape even while he spares them from the blast. The X-Men speed away, unaware that Dr. Druid has stowed away on the Blackbird. 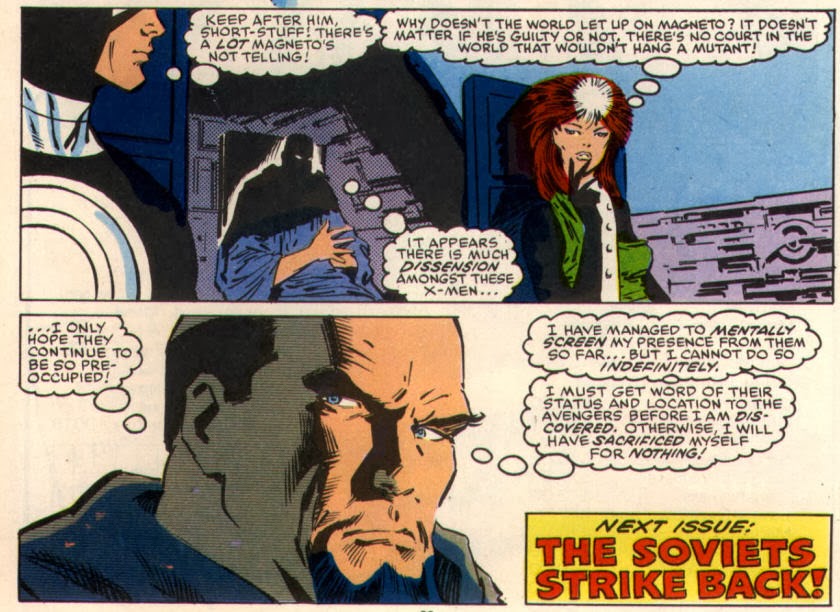 Issue #3: The X-Men discover Dr. Druid, but not before he relays their location to the Avengers. Landing in Singapore, the X-Men disappear, as the Avengers and Soviet Super-Soldiers arrive and begin to search for them. The X-Men book passage on a Dutch freighter, but are located by the Soviets, and a battle breaks out. One of the Soviets destroys the ship's engines, causing it to sink, but the Avengers arrive and help the X-Men rescue the crew. However, in the confusion, Magneto has escaped and heads back to Singapore, citing unfinished business. Issue #4: In Singapore, Magneto is sheltered by a group of underground mutants, but ultimately decides to give himself up for trial. At the trial, he uses the reconfigured circuitry in his helmet to eliminate the prejudice of the chief justice, hoping to avert a mutant-triggered race war if he's convicted. However, after the trial, he realizes his acquittal has instead simply fanned the flames of humanity's hatred towards mutants.

Firsts and Other Notables
Issue #4 is notable for reprising Magneto's trial from X-Men #200, with new judges but the same prosecutor and defense attorneys (sans Xavier, of course). Gabrielle Haller argues in Magneto's defense that he is swears allegiance only to his race, and since his race has not signed the Geneva Conventions, the court has no authority over him. While this motion is dismissed, ultimately the judges (swayed by Magneto manipulating the mind of the chief justice) essentially rule that Magneto is outside their jurisdiction, and while other nations may seek damages for violations of their laws, he is free to go in the eyes of the World Court. 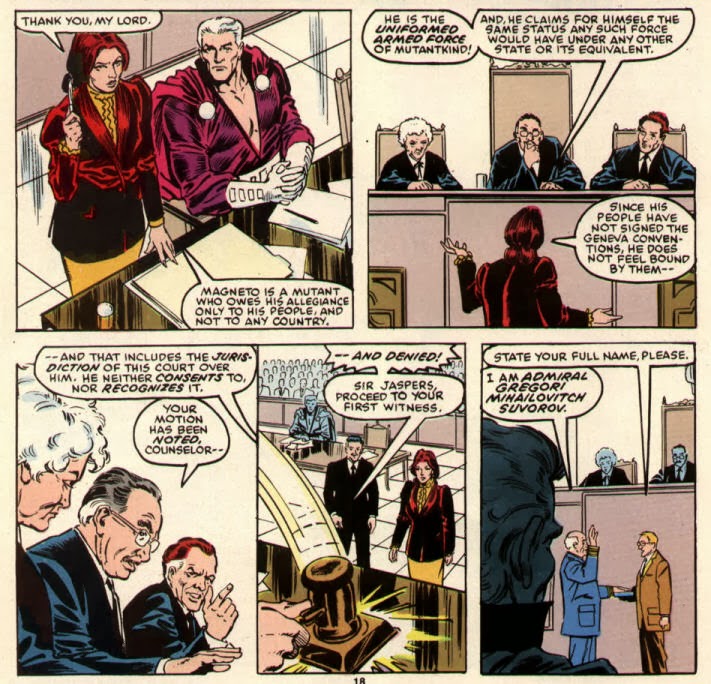 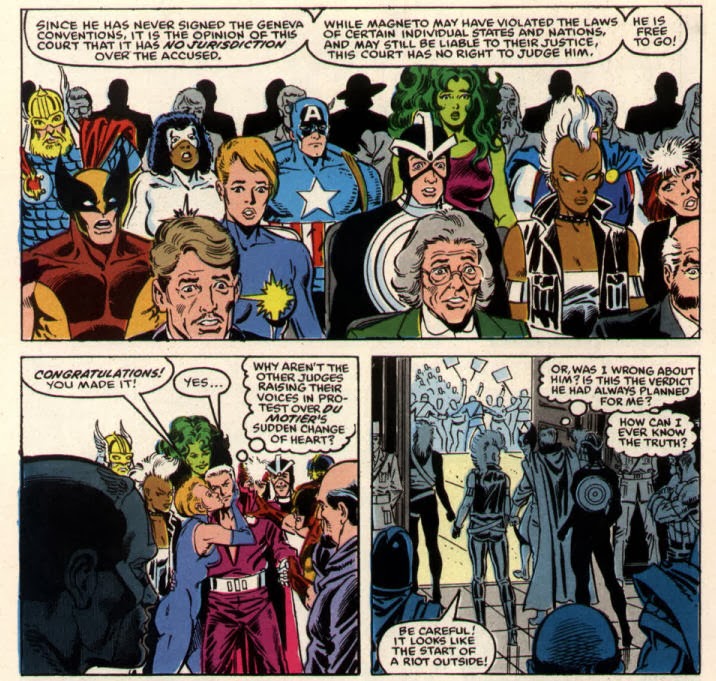 The first three issues of this series are written by then-Avengers writer Roger Stern and drawn by Marc Silvestri (reportedly, it was Silvestri's work on this series which caught Claremont and Nocenti's eyes, leading to Silvestri becoming the new regular penciler of Uncanny X-Men). The final issue, however, is written by Tom DeFalco and drawn by Keith Pollard. As detailed here, Stern originally intended to use this series as a means to restore Magneto to villainy. However, the higher-ups at Marvel (presumably Jim Shooter, who gets a co-plotter credit on the final issue) stepped in (whether at the urging of Claremont or not is unclear) and nixed that idea, leading to the new creative team on the fourth issue (though as the link suggests, Silvestri likely just moved off the series to his Uncanny gig).

For whatever reason, Longshot and Psylocke sit out most of this series, with issue #4 revealing that they're being held in reserve by Storm just in case they're needed. 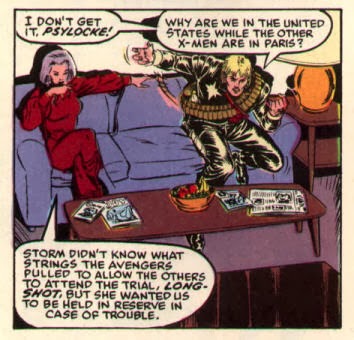 When called to testify in issue #4, Captain America says that in his expert opinion, Magneto has not genuinely reformed, even if Magneto himself currently believes he has. Ultimately, Cap will be proven right.

Not that it means anything, but it's interesting to note that Fantastic Four vs. the X-Men was written by Chris Claremont yet featured the X-Men name second in the title, while The X-Men vs. the Avengers is written by Roger Stern yet the X-Men name is in the first position (and the 2012 crossover event series is titled "Avengers vs. X-Men", though whether that was intentional to avoid confusion with this series or a happy accident, I have no idea). Also, She-Hulk appears in both series as a member of the team opposing the X-Men.

Each issue of the series cost $1.50, twice the rate of a regular issue at the time, and was, I believe, printed on the higher-quality Baxter paper.

The Chronology Corner
The Avengers are considered to appear here between issues #285 and #286 of their series, though technically I believe this takes place between pages of #285. Namor, who was a member of the team at this time, is notably absent from this series.

A Work in Progress
This series heavily references Magneto's actions in X-Men #150, in which he sank the Russian sub Leningrad, killing all aboard, and destroyed the (evacuated) city of Varykino, as well as his aborted trial before the World Court in issue #200. Issue #2 establishes that a Soviet tribunal tried Magneto in absentia and found him guilty of the crimes he committed in issue #150.

In issue #1, Havok angst about not fitting in with the X-Men, and says he misses Lorna. Has he...you know, tried calling her? As we'll see, probably not, continuing the X-Men's (and particularly the Summers brothers') longstanding enmity with phones. 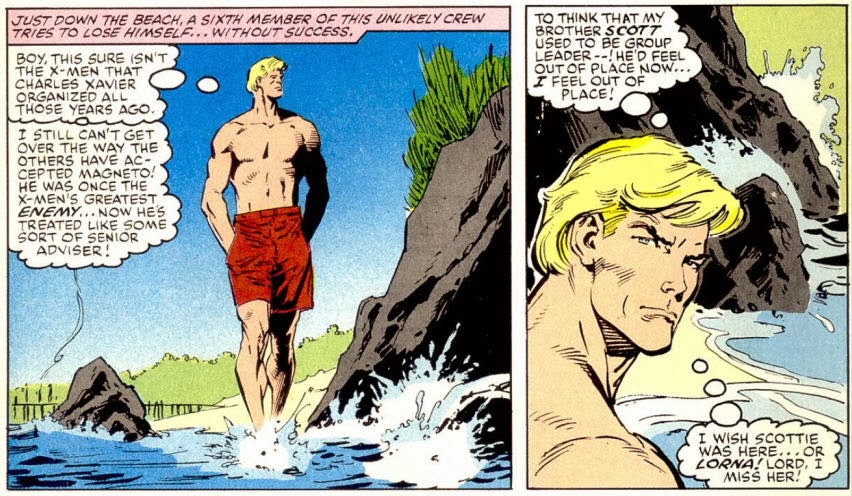 Magneto is motivated in this series by fragments of Asteriod M (accidentally destroyed by the arrival of Warlock in New Mutants #21) crashing to Earth, and his desire to not see the technology therein fall into the wrong hands. This won't be the last time the X-Men deal with fragments of Asteroid M.

Silvestri clearly draws Wolverine's mask as a cowl, as opposed to the helmet-esque look Byrne gave it. 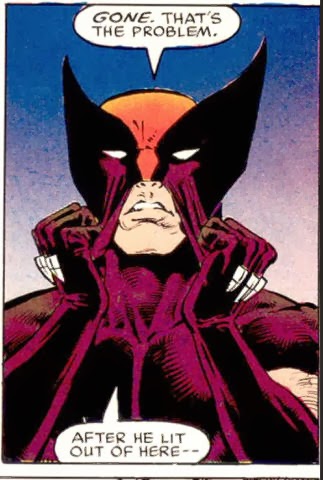 In issue #2, Dazzler is once again depicted as creating silence in the wake of powering herself up by absorbing all the ambient sound around her.

Magneto is essentially able to teleport himself and other people in issue #4 by carrying them on "lines of magnetic force", something we don't see him do too often (probably because it's ridiculously powerful). 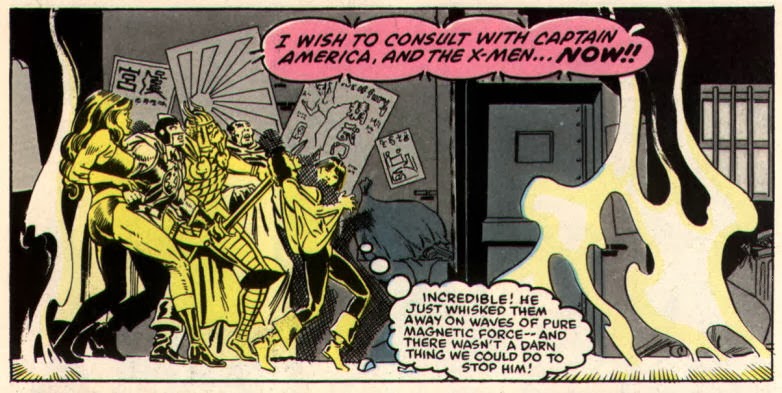 Magneto, using his reformatted "prejudice eliminating" helmet on Captain America in issue #4, is surprised to learn that Cap genuinely has no anti-mutant prejudices, convincing him not to use the helmet on all of mankind and instead turn himself in for trial. 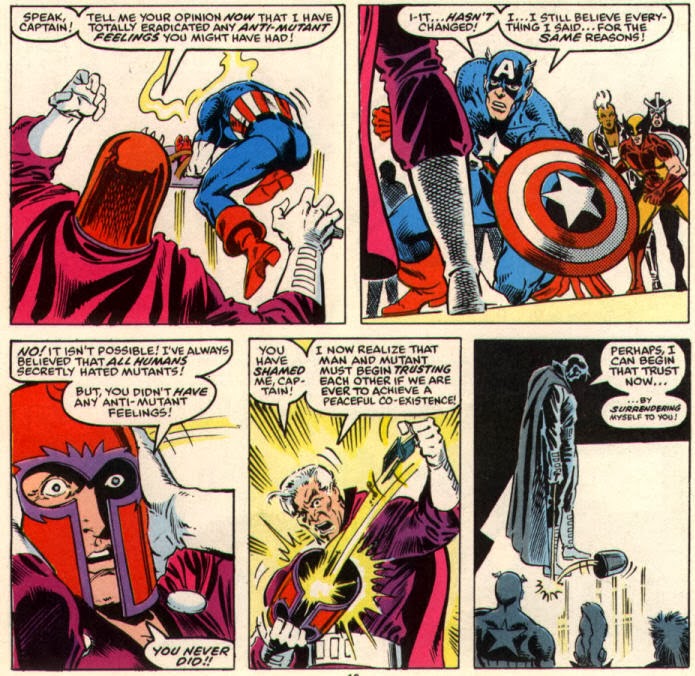 I Love the 80s
In issue #1 Dr. Druid mass hypnotizes a group of people, saying its easier than usual due to them being shoppers. 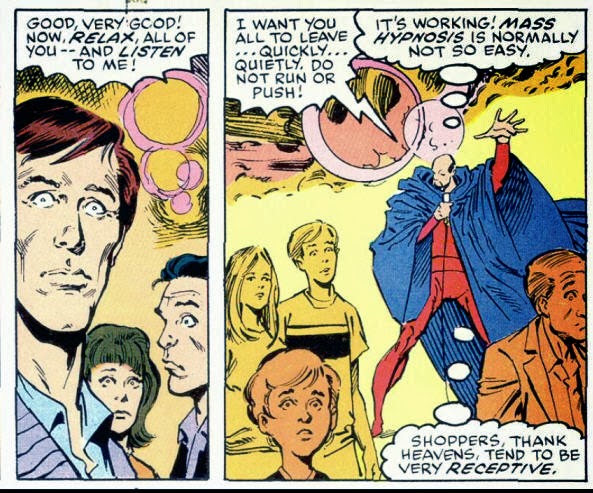 At the lake, Dazzler is listening to Lionel Richie. 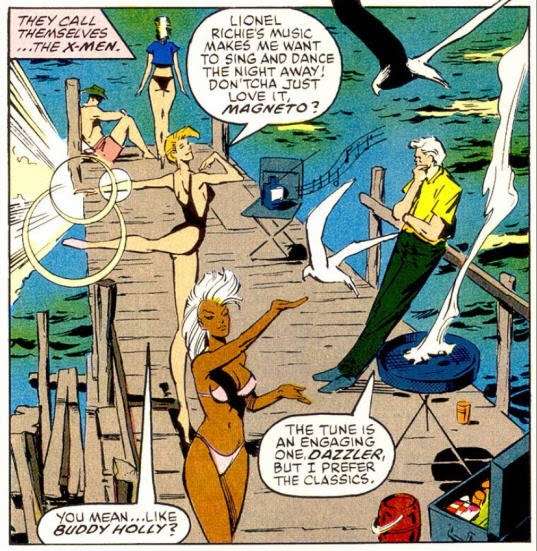 Not to be crude, but a inking or coloring mistake in issue #1 makes it look as though Rogue is trying to go skinny dipping but only getting it half right.

The Best There is at What He Does
It's established in issue #2 that Wolverine's claws can't cut Black Knight's mystical Ebony Blade. 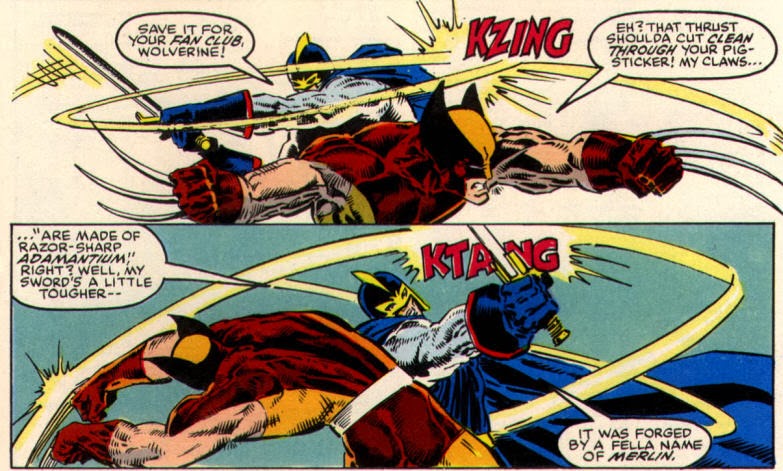 Human/Mutant Relations
The human Crimson Dynamo is clearly anti-mutant, though when called on it by his mutant teammates in the Soviet Super-Soliders, he claims he's only opposed to "outlaw mutants" like the X-Men.

As the series ends, Magneto, who had worried that his conviction would lead mutants to rise up against humanity, realizes that his acquittal has triggered a new wave of anti-mutant sentiment in humanity, an outcome he hadn't considered. 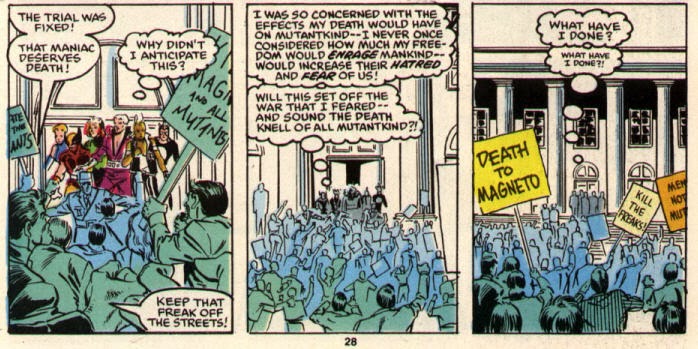 Teebore's Take
This is another odd limited series. The first three issues, written by Roger Stern and drawn by Marc Silvestri, are effective enough. Stern ably works in the three teams, giving each one a unique position relative to Magneto as motivation for their involvement in the story. The art is rough, and overly-inked at times, but still recognizable as Silvestri. Then the fourth issue comes along, with a new writer and new artist, and the result is the introduction of two new characters for ultimately no good reason (the underground Singapore mutants) followed by a boring courtroom drama that re-sets the stage from Uncanny X-Men #200 with none of that issue's gravitas. It's an odd shift, particular after the relatively action-packed start.

Yet despite its poor execution, I can't get too down on the final issue. As the story goes, Stern was setting up this series to return Magneto to out-and-out villainy until someone at Marvel stepped in and put the kibosh on the idea, leading to the bizarro final issue. While I can't applaud the execution of that issue, I'm ultimately relieved that "Redeemed Magneto" was given a stay of execution, at least for the time being (and even if you hate that iteration of the character, it seems only fair for Claremont to be the one to revert the character to villainy, rather than another writer in an ancillary limited series). Unfortunately, the conflict between the more strongly-executed first three issues and the more narratively-satisfying final issue leads to a hodgepodge story, one that zigs when it seemed like it was going to zag, with the energy building towards a climax that ultimately drains that energy dry. I may appreciate where the final issue leaves Magneto in terms of his characterization, but there's no denying it ultimately derails this series.

Next Issue
Friday, the X-Men take on Horde (not that one) in X-Men Annual #11. Next week, it's back to business as usual in Uncanny X-Men #220.
Newer Post Older Post Home
Posted by Austin Gorton at 12:00 PM