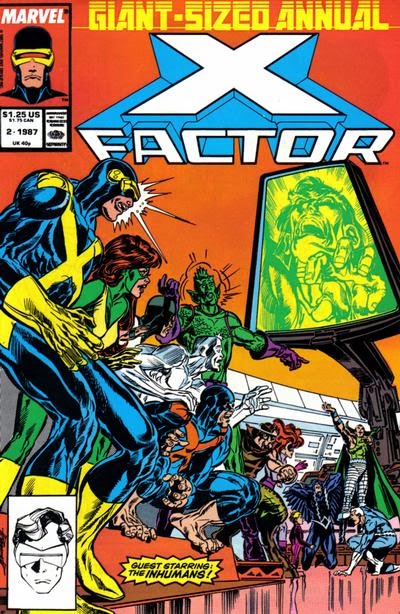 In a Nutshell
X-Factor and the Inhumans battle Quicksilver and Maximus the Mad.

Plot
X-Factor is in Central Park as Artie and Leech play with Franklin Richards and the Power children. Suddenly, Quicksilver and Lockjaw appear, and Quicksilver grabs Franklin. However, the pair is unable to flee as Leech is blocking Quicksilver's super speed and Lockjaw's teleportation ability. The Power kids attempt to help Franklin and call out to X-Factor, who join the fight, but all are rendered equally powerless by Leech. Eventually, the fight strays far enough from Leech that everyone's powers return, and Quicksilver orders Lockjaw to take them home. Lockjaw proceeds to teleport Quicksilver, Franklin and X-Factor to the court of the Inhumans on the Blue Area of the moon. Quicksilver, frustrated that Lockjaw took them there instead of to their master, tries to run off with Franklin, but is attacked by X-Factor and the Inhumans. Eventually, Lockjaw teleports again, taking Quicksilver, Franklin and Inhumans Medusa and Gorgon with him. 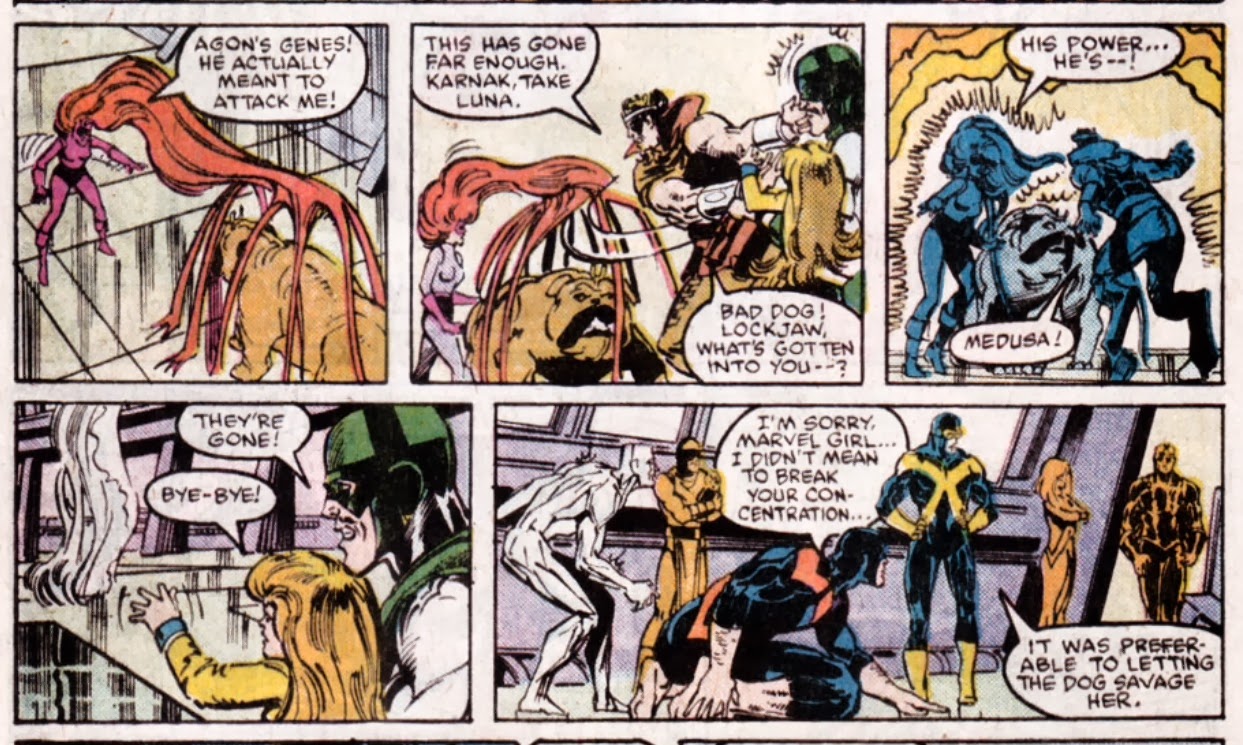 X-Factor introduces themselves to the Inhumans, and learn of Quicksilver's recent return to villainy while devising a means to track Lockjaw's teleportation signature. Meanwhile, Quicksilver presents Franklin to his master, Maximus the Mad, who imprisons Medusa and Gorgon and intends to unlock Franklin's psychic potential and use it take over the Inhumans. However, X-Factor and the Inhumans manage to track Lockjaw to Maximus' hideout, and in the ensuing battle, Maximus' control device is destroyed and the villain is apprehended. Quicksilver escapes, however, though with Maximus' defeat, he is more clearheaded. He visits his estranged daughter, and promises her he will try to do right by his recent actions. Elsewhere, in the aftermath of the battle, Scott and Jean discuss Phoenix, and Jean asks Scott to show her the place where Phoenix died.

Firsts and Other Notables
This issue guest stars the Inhuman, a race of genetically-modified humans created by the alien Kree by experimenting on early man. They first appeared in Fantastic Four during Stan Lee and Jack Kirby's legendary run on that title, and though they've rarely carried their own series for very long, they remain a staple of the Marvel Universe. They'll meet up with X-Factor again shortly before the title gets revamped and a new cast of characters comes aboard.

The villain of this story is Quicksilver, who at the time was coming off an extended period of time in which he returned to villainy after years as an Avenger, triggered by his wife, the Inhuman Crystal, cheating on him (with, if I recall correctly, a realtor or some other relatively mundane person). This foray into villainy was most notable for his attempt to turn the government on the Avengers, leading to their arrest by Freedom Force in Avengers Annual #15 (it was this act that ultimately led the second Spider-Woman to leave Freedom Force).

In the course of this story, it is revealed that Quicksilver is under the control of Maximus the Mad, the evil and (as the name suggests) insane brother of the Inhumans' king, Black Bolt, a revelation that helps set Quicksilver on the path to redemption (suggesting as it does that he's not solely responsible for all of his recent villainous actions), allowing him to rejoin the Avengers and, ultimately, the government-sponsored iteration of X-Factor. To that end, the issue ends with a now-clearheaded Quicksilver promising the perpetual plot device that is his daughter that he'll try to do better. 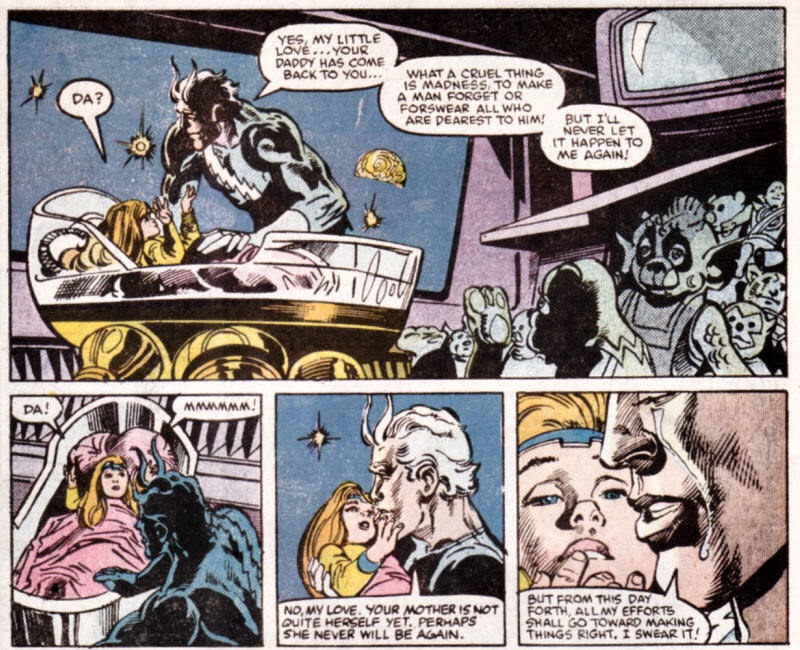 The Chronology Corner
This issue takes place between pages of X-Factor #18, after X-Factor returned to their headquarters with Rictor, but before Iceman, Beast and Caliban leave to search for Boom-Boom. As a result, the understanding Scott and Jean seem to reach at the end of this issue regarding Phoenix is somewhat overshadowed by their coming to blows over the creature immediately after returning to Earth following this story.

A Work in Progress
Scott and Jean discuss whether or not X-Factor posing as mutant hunters has made things worse for mutants (Scott's right, it has). 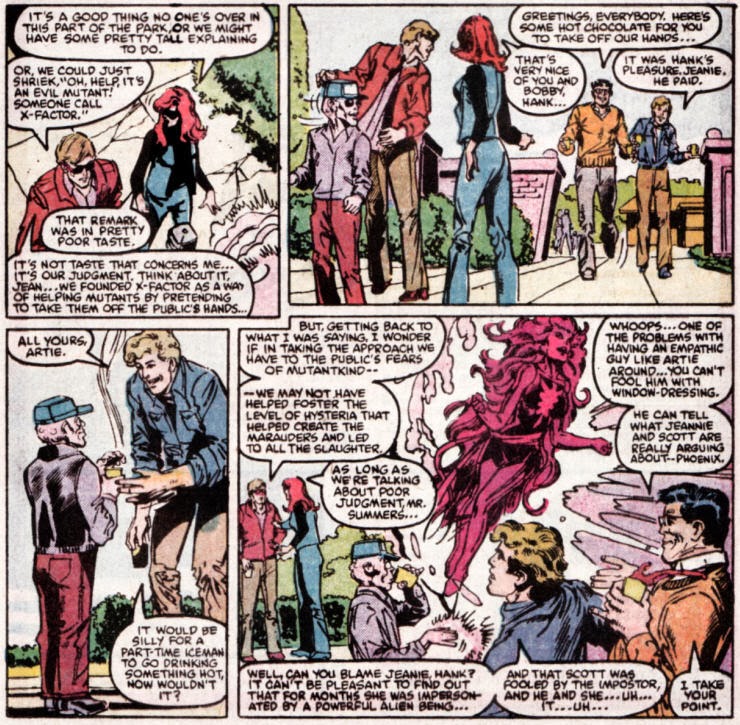 Iceman continues to have problems controlling his powers, taking a chance on using them and getting frozen in a block of ice, from which the Inhuman Karnak must free him and prompting a genuinely humorous comment from Maximus.

I Love the 80s
When Quicksilver grabs Franklin, he calls him the man from his special dream (he had a prophetic dream of the encounter earlier in the issue), imbuing that scenario with even more reasons for Child Protective Services to be called in. 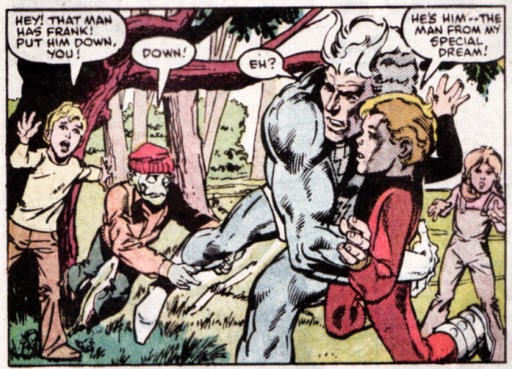 Scott Summers, Husband of the Year
Cyclops puts his foot in his mouth a bit when he learns the details of how Quicksilver's wife left him. 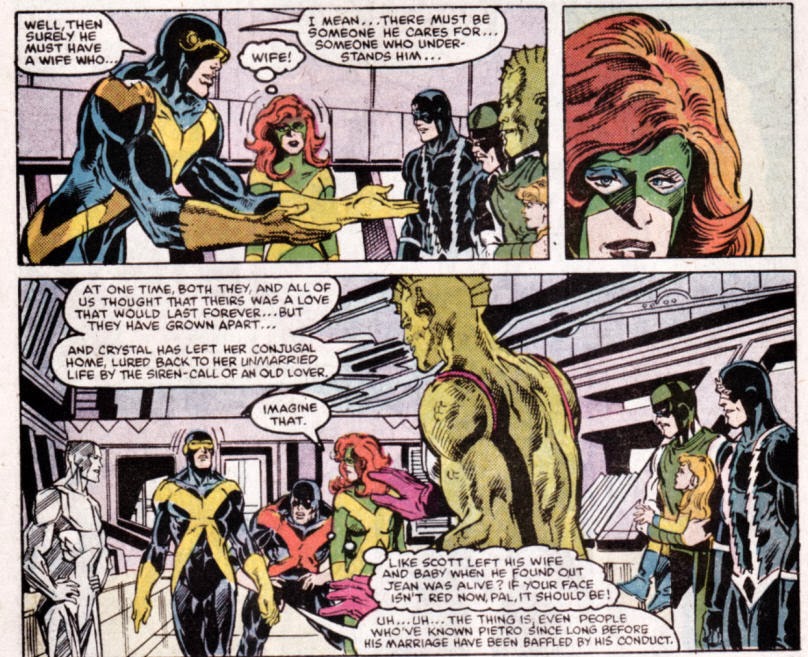 Like a Phoenix, From the Ashes
As the story ends, Marvel Girl asks Cyclops to take her to the place where Phoenix died. 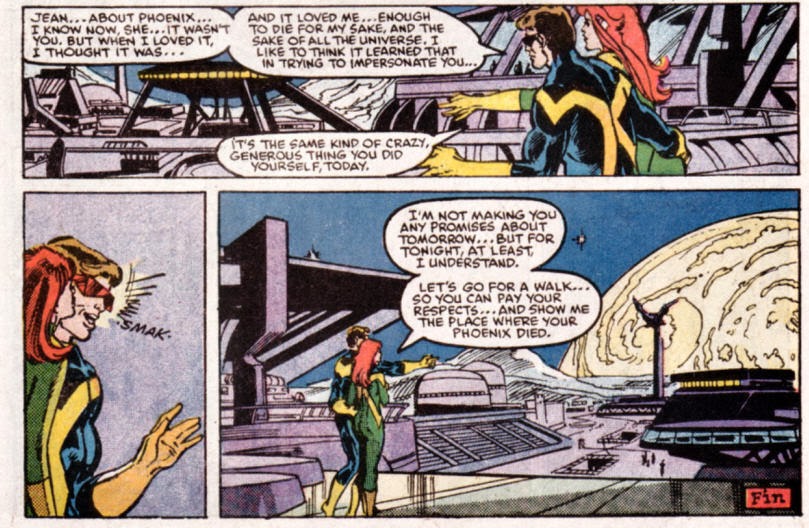 Teebore's Take
Unfortunately, there's not much to this issue. It's ostensible purpose is to put Quicksilver on the path of redemption following some time spent as a relapsed villain, and while that redemption will become significant to the larger Marvel universe (and, eventually, X-Factor itself), at the moment there's no reason this story had to occur in an X-Factor annual. Lip service is paid to Iceman's recent power boost while Scott and Jean briefly come to terms with the role of Phoenix in their lives (something which is ultimately rendered more or loose moot by the end of issue #18) and there's some novelty in seeing Jean visit the Blue Area of the moon (where Phoenix died), but there's little about the story itself that requires X-Factor's presence, and the art is a mixed bag. I don't believe I've ever encountered Grindenberg's work before; at times it's somewhat cluttered, his figures distorted, yet at other times, it almost reaches a Neal Adams-esque level of expression and composition, which at least makes parts of the issue nice to look at it. Overall, though, this is little more than another forgettable annual.

Next Issue
Next week, we look at X-Men vs. the Avengers #1-4, in which Magneto's legal status is once again called into question, followed by X-Men Annual #11.
Newer Post Older Post Home
Posted by Austin Gorton at 12:00 PM