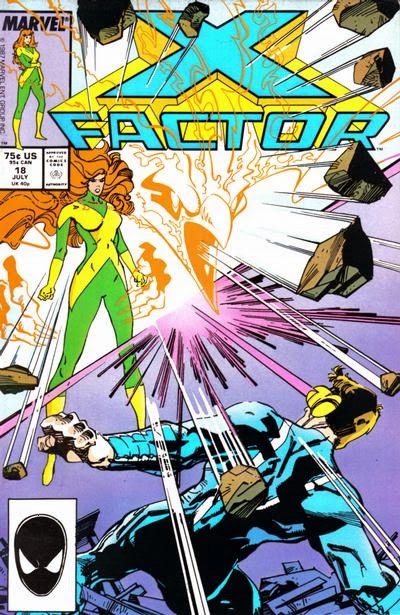 In a Nutshell
Scott and Jean come to blows over whether or not Jean is Phoenix.

Plot
X-Factor returns to their headquarters with Rictor and a frozen-solid Iceman. After Rusty and Skids help thaw Iceman, they discuss their relationship, worried they'll turn out like Scott and Jean. The next morning, Rusty discusses his feelings for Skids with Scott, who tells him that his time with Jean didn't come until they were older. As Scott tells Rusty about how Phoenix held back his power on a butte in New Mexico, Jean overhears him and angrily runs off, much to the glee of a watching Cameron Hodge. Later, Scott and Hodge discuss Hodge's ad campaign during a training session between Rictor and Beast, and the sound of Hodge's voice causes Rictor to freak out and lose control of his power. As Leech helps him get it under control, Hank, Bobby and Caliban set out to try and track down the missing Boom-Boom. Scott retires to the penthouse, hoping to dig up some info on Hodge in the computer system, but just then Dark Phoenix appears before him, taunting him. Jean overhears him talking about Phoenix and confronts him about his insistence that she is Phoenix. 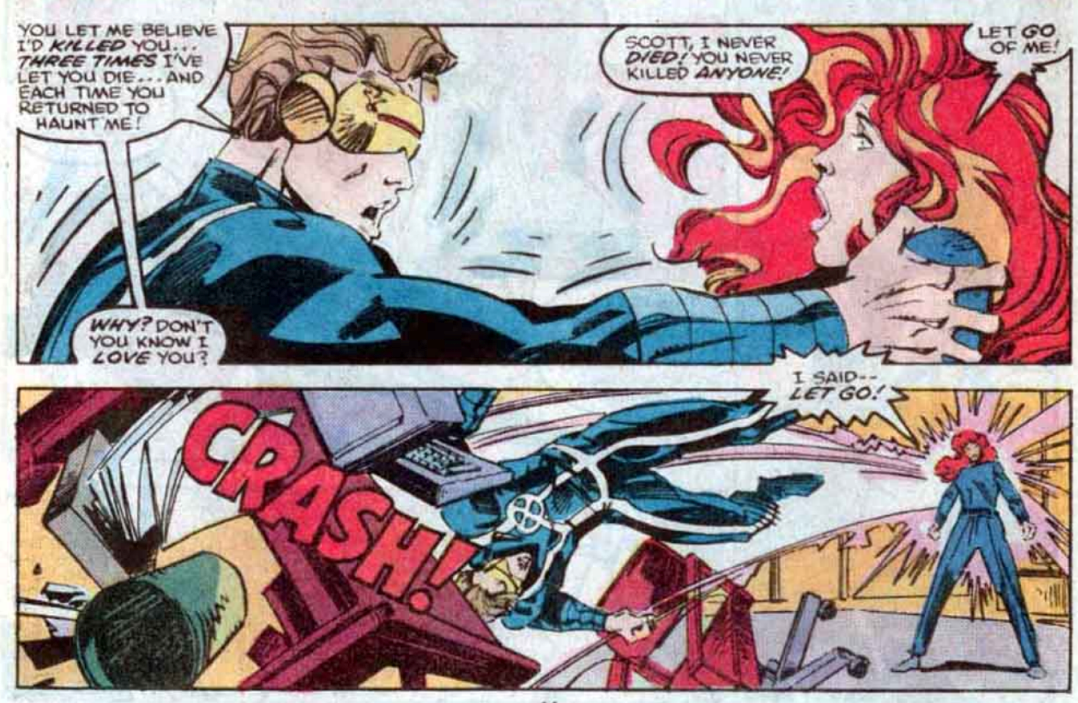 Their argument becomes violent, their powers damaging the upper floors of the complex and drawing the attention of the kids. Determined to prove that Jean is Phoenix, Scott removes his visor, confidant Jean can hold back his power just as Phoenix did. When no blast emerges, Scott rejoices that Jean is Phoenix, meaning that Jean, Maddie and Phoenix are all the same, that he isn't responsible for any of their deaths, even while Jean insists she's not Phoenix, and that she hates her. Just then, Scott notices that the kids have been watching them, and that Leech's power is what stopped his blast. Scott is horrified that he almost killed Jean, just as Rusty discovers that the computer was rigged to create a hologram of Phoenix. He wonders who could have done it, but Scott realizes who is responsible: Hodge. Meanwhile, Apocalypse awakens his latest recruit, promising to restore him to what he was, in the process making him Death, Fourth Horseman of Apocalypse.

Firsts and Other Notables
This issue confirms that Cameron Hodge has been manipulating Cyclops into going crazy (at least in part), and that the X-Factor ad campaign he devised was done with nefarious intent, effectively ending X-Factor's time as fake mutant hunters (though it's been awhile since they've acted in that capacity, and won't publicly reveal themselves for awhile yet). Additionally, it's revealed that all the images of Jean/Maddie/Phoenix that Cyclops has been seeing/talking to are all computerized holograms created by Hodge. 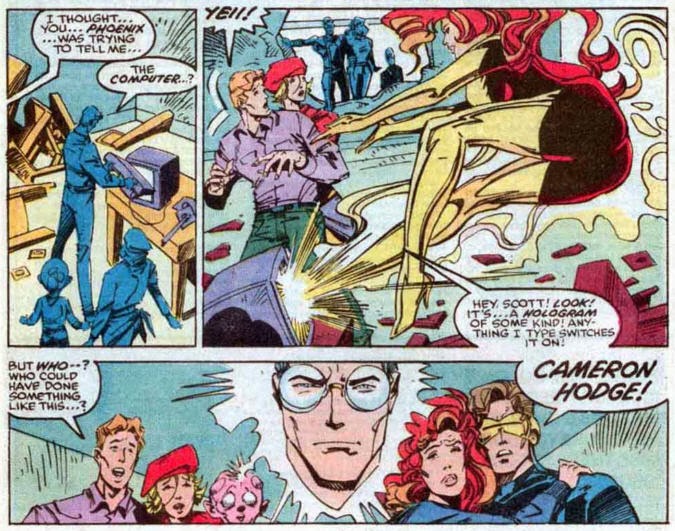 In the issue's coda, Apocalypse is seen beginning his work to create Death, using regenerative technology devised from his own malleable cells to restore him, and while it's never directly stated, it's heavily implied that it's Angel being transformed (the "anything to fly again" bit is the giveaway, though the blond eyebrows and "why save me?" also help). 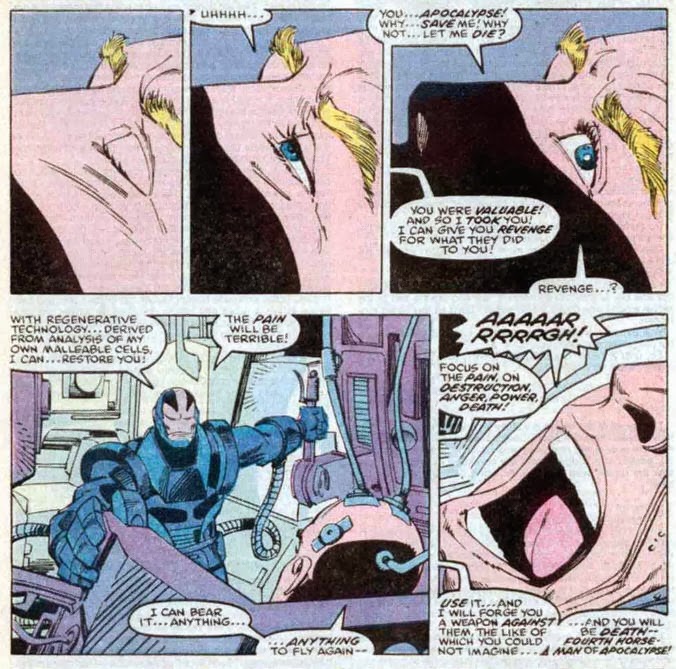 A Work in Progress
Rictor settles in at the X-Factor complex, effectively joining Rusty, Skids, Artie and Leech as another of X-Factor's young charges.

When he first hears it, Hodge's voice seems familiar to Rictor, and later, when Rictor overhears Hodge while training, the sound of his voice, which he says is similar to the voice of the Right's leader, causes him to freak out to the point where Leech has to be brought in to get Rictor's power under control. 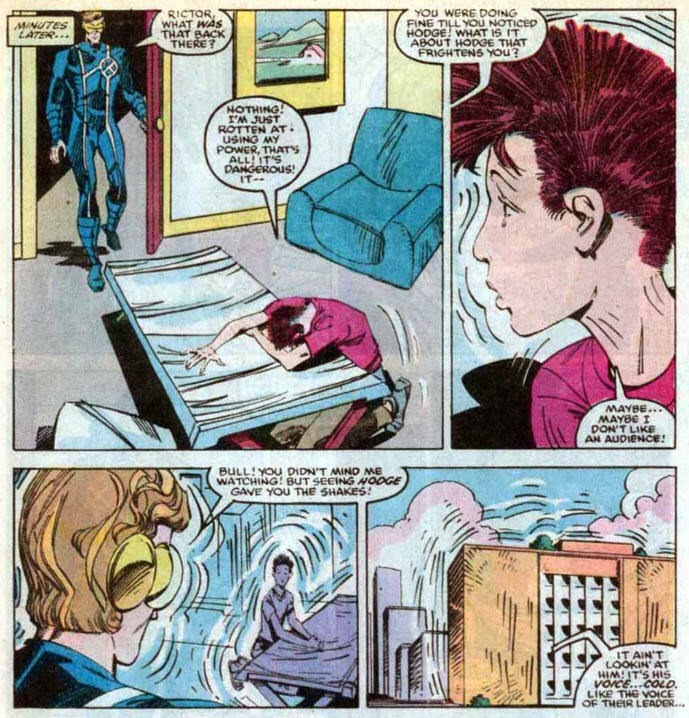 Beast, Iceman and Caliban depart this issue to search the city for the missing Boom-Boom (whom, unknownst to them, left with Ariel to re-join the Fallen Angels); we'll catch up with their search in the next issue.

Believing Jean, Phoenix and Maddie to all be the same person, Scott says that he's let her die three times, and each time she returned. I believe the three times he's referencing are when the shuttle crashed in Jamaica Bay, when Phoenix killed herself on the moon at the end of the "Dark Phoenix Saga", and Maddie's recent "death" (which Scott doesn't know was faked).

I Love the 80s
Scott's approach to computers in this issue is like a cross between Ben Stiller's in Zoolander and Homer Simpson's, typing "search for Hodge, Cameron" in the hopes of digging up some dirt on him ("where's the 'any' key?"). 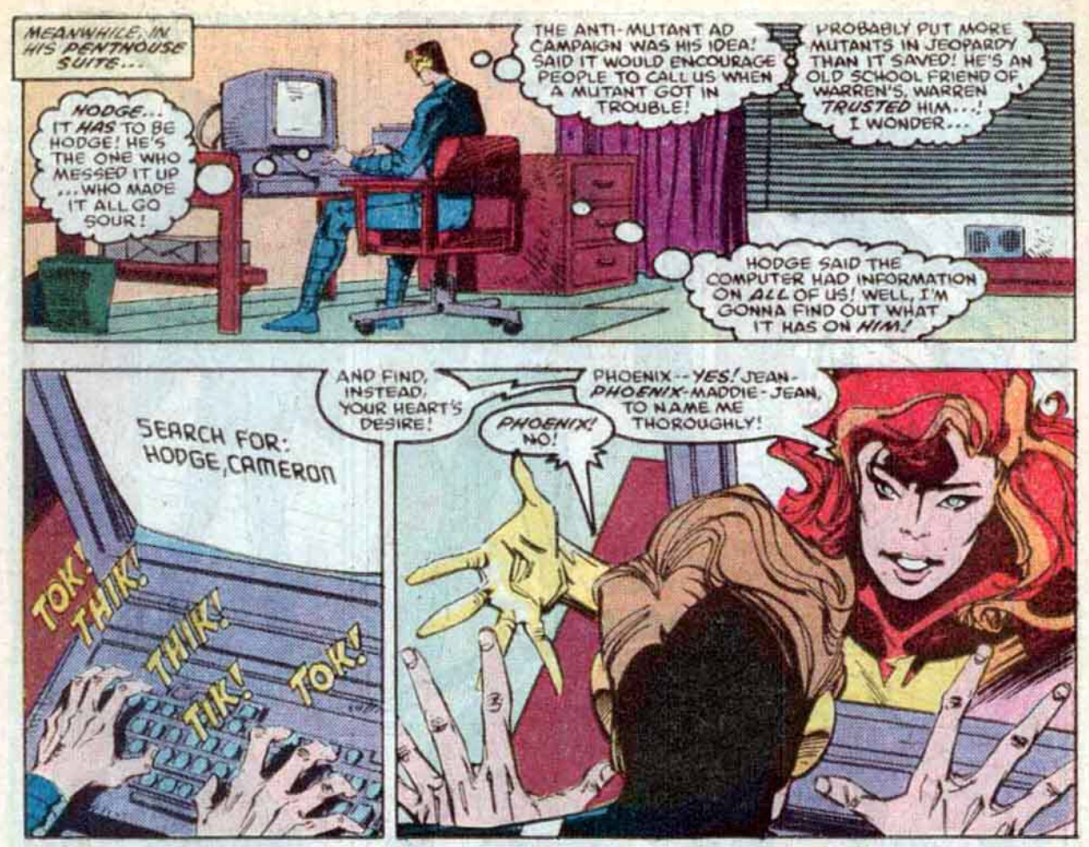 The Awesome and Terrible Power of Cyclops
The ending of this issue, in which Cyclops removes his visor, confidant Jean is powerful enough to hold it back only to avoid blowing her head off by the timely arrival of Leech, becomes another point of angst for him. 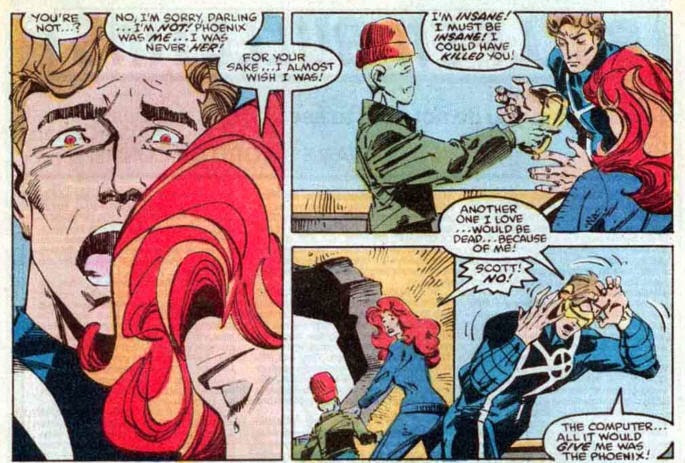 Young Love
Rusty and Skids (who are now kissing on-panel) discuss their relationship, comparing themselves to the young Scott and Jean. 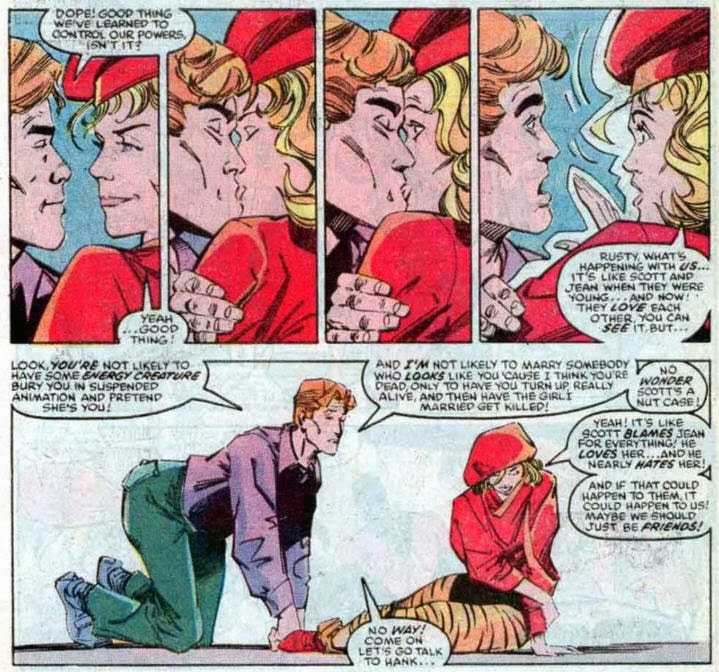 Later, Rusty more or less tries to have "the talk" with Scott, suggesting Rusty and Skids (or at least Rusty) are thinking about having sex. But man, did Rusty pick the wrong adult male mentor figure with which to try and have *that* conversation... 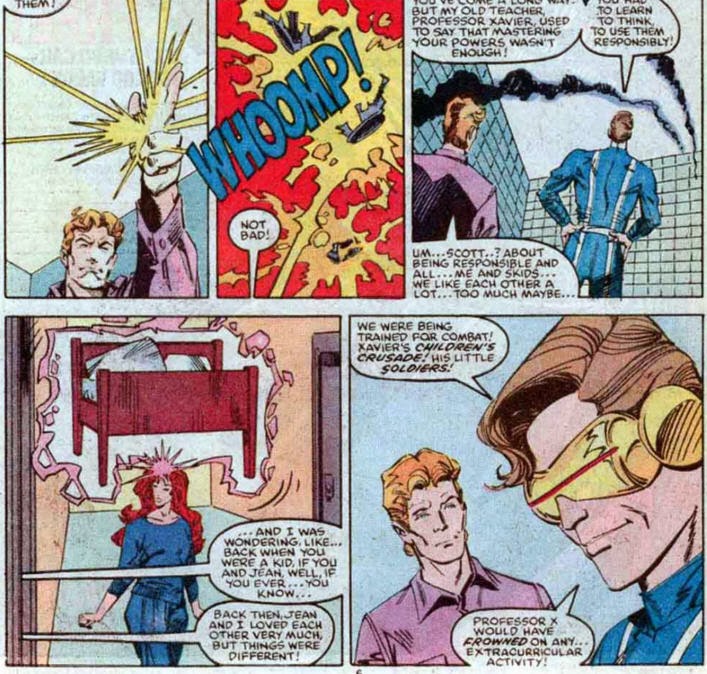 Scott tells Rusty about the scene between Scott and Phoenix on the butte in New Mexico, from X-Men #132, giving Walt Simonson a chance to recreate it (I actually saw the scene here first, long before I ever saw the original), the context of which further suggests that was the first time Scott and Jean had sex (well, Scott and a cosmic being that was an exact replica of Jean at the time, anyways. Comics!). 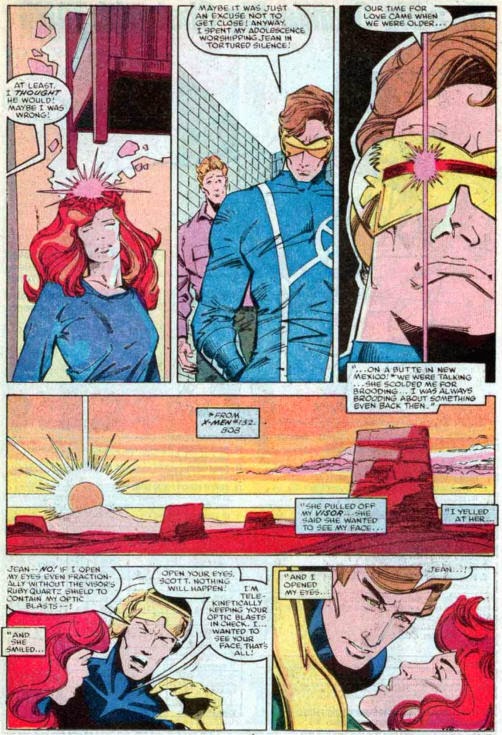 As Scott and Jean have it out, Scott admits that he still loves Jean, and that he loves her for who she is, not because of who Phoenix was. 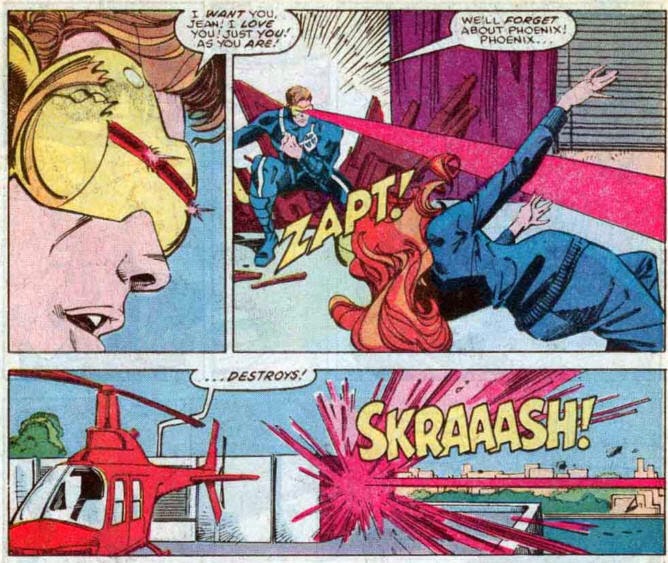 Human/Mutant Relations
Continuing his newly-vehement attacks on anti-mutant hysteria, Bobby is now declaring how sick he is of the X-Factor mutant hunter ads, and we've reached a point where pretty much everyone is taking it as a given that the whole mutant hunter thing was a bad idea.

Mutants. Deeds. Know Them.
When X-Factor returns to their headquarters with Rictor, Rusty and Skids run out, saying they heard Iceman's speech on TV. 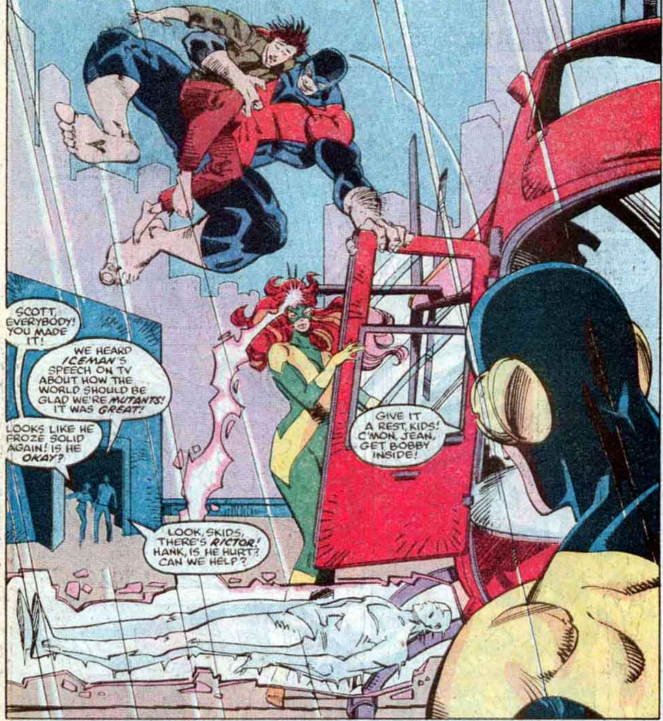 Teebore's Take
With this issue, the soap operatics and histrionics reach a whole new level, as Scott and Jean finally have it out over Scott's Phoenix-related craziness. This being superhero comics, "having it out" of course means throwing furniture around and blasting things, as the pair manage to fairly wreck the upper floor of X-Factor's headquarters. In one of the more obvious uses of the "super-powers as emotional release" metaphor, the end result of all the shouting and destruction is a new understanding: Jean is not Phoenix, Scott does love Jean for Jean (and is still probably a little crazy), and Cameron Hodge has been trying to drive Scott crazy (moreso).

The latter is the most significant in terms of the development of the series. Like the introduction of The Right last issue, it is another important step in extricating the characters from the foolishness of the mutant hunter idea. By revealing Hodge to be willfully nefarious and working against the team, Simonson effectively lays the blame for the book's ill-advised premise at the feet of an out-and-out villain. Hodge, from the very first issue, was credited with coming up with the mutant hunter idea - now, we begin to see that he came up with the idea specifically BECAUSE it would make things worse for mutants. The characters are still idiots for not realizing that themselves, but having them hoodwinked as part of a secret villain's scheme is a fair improvement over them all just being completely ignorant, and with the emergence of that villain, the book takes it largest step yet out of the shadow of its initial premise.

Next Issue
Next week, Kitty Pryde gets medical treatment from an ill-named doctor in Fantastic Four vs. the X-Men #1-4, followed by X-Factor Annual #2.
Newer Post Older Post Home
Posted by Austin Gorton at 12:00 PM