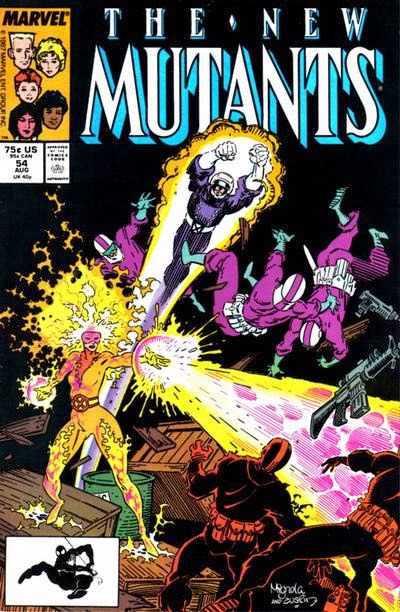 In a Nutshell
Karma and Chris Claremont leave.

Plot
In the bowels of the Hellfire Club, Karma takes control of Tessa, and uses her to search for information on Karma's missing siblings, but she comes up empty. Upstairs, Dani and John Proudstar lay out the terms of the New Mutants and Hellions contest: both teams hunt down the person who sold the fake Selene statute, with the losing team apologizing and taking the rap for any trouble with their respective headmasters. In a nearby suite, Illyana arrives with the group's graduation uniforms, but Karma bows out of the hunt. Transforming into a wolf, Rahne tracks the scent off the statute to Central Park, where she realizes the culprits they're after is Viper and Silver Samurai. Back at the club, Karma and Magneto discuss her missing siblings. In Limbo, the New Mutants observe the Hellions via a scrying pool, learning they've tracked Viper and Silver Samurai to nearby Shooter's Island. 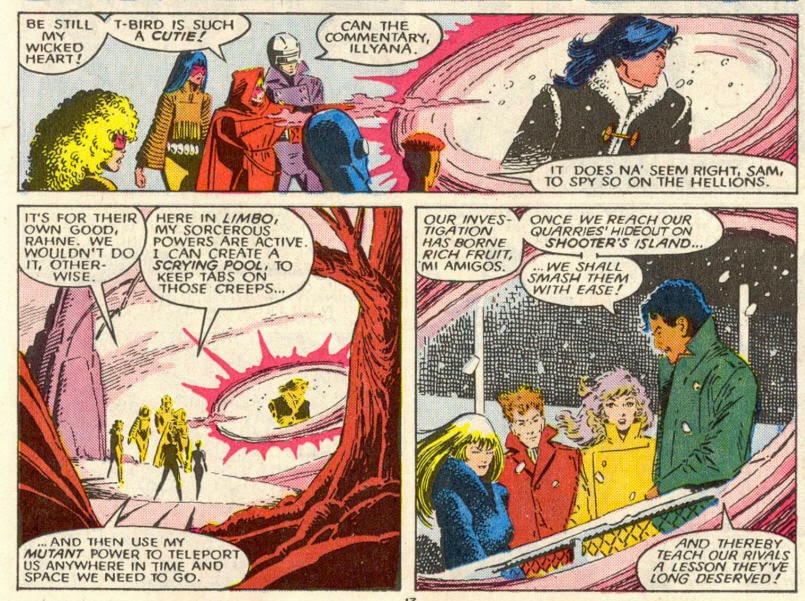 Firsts and Other Notables
This is Chris Claremont's final regular issue of New Mutants (two Claremont-penned inventory fill-in stories will appear later in the series, but this marks his final regularly-scheduled issue). According to an announcement in a previous letters page, he originally intended to leave the title for a brief period of time to focus on his first novel, First Flight, but he ultimately won't return, leaving the series in the hands of incoming writer Louise Simonson until shortly before the series transitions into X-Force. I'm not sure if either Excalibur or the Wolverine solo series were in the works at this point (most likely not), but Claremont's eventual involvement in the launch of both those titles likely hampered any efforts to return to this series.

On his way out, Claremont writes out Karma, who leaves the team this issue, going to work for her criminal uncle in the hopes that he can help her find her missing siblings (which is where we'll see her next, when Claremont returns to her early in Wolverine. Why she believes her uncle, a low level criminal compared to the Hellfire Club, will have any more info than the club itself, is unclear). I've never known whether Claremont wrote her out at the behest of Simonson, if her departure was planned for this time all along, or if he wrote her out so he could more easily pick up her story at some future point. Whatever the reasoning or his overall plans for the character remain unknown, as the story of her missing siblings will go unresolved by Claremont.

When Karma takes control of Tessa, Sebastian Shaw's longtime aide, we get our first possible hint at the retcon involving the character which Claremont will establish after he returns to the X-Men in the 00s, as Karma compares Tessa's mind to a computer, saying she is much more than she seems (Claremont will later reveal that Tessa's power makes her mind like a living computer, and that she's been an agent of Xavier's inside the club this entire time, after which she'll join the X-Men as Sage and become Claremont's latest Mary Sue character). Coming from any other writer, I'd chalk it up to lucky coincidence (which it still could be), but with Claremont, its entirely possible he had the idea of Sage in mind already at this time. 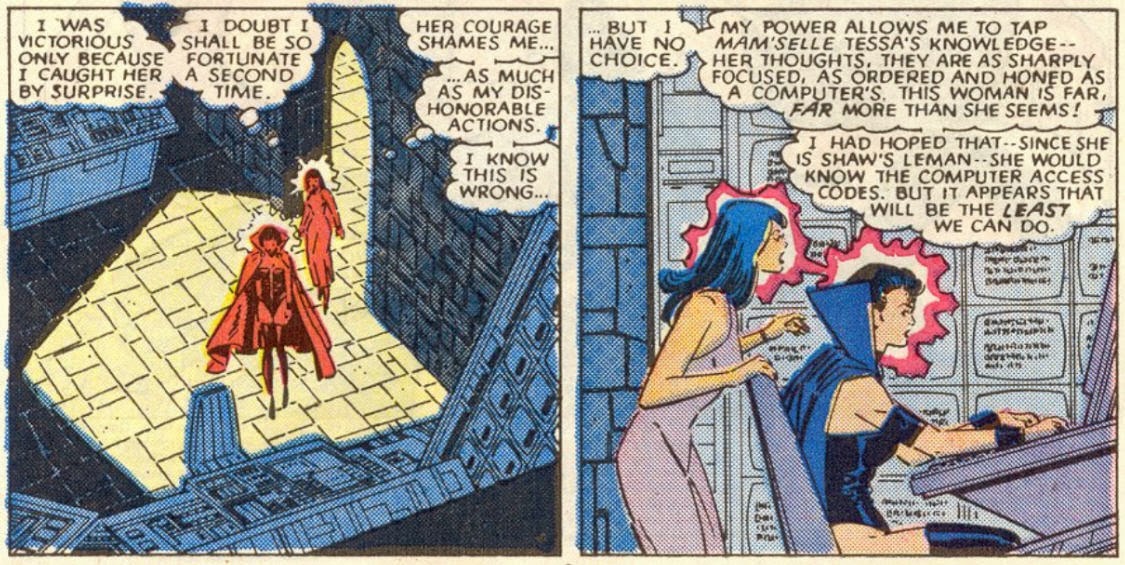 Sal Buscema, the book's second regular artist, returns to fill in on pencils, which is a nice little happy coincidence for Claremont's final issue. Mike Mignola provides the cover art.

A Work in Progress
The New Mutants don their graduation uniforms once again, hoping they will help disguise their identities, in part because Magneto has only seen them once before (in X-Men Annual #10, though it could be argued he also saw them in New Mutants Annual #3, the last time they wore the costumes).

Rushing into battle, Doug admits that without Warlock around, he's scared, though he later throws himself in front of a blast meant for Dani. 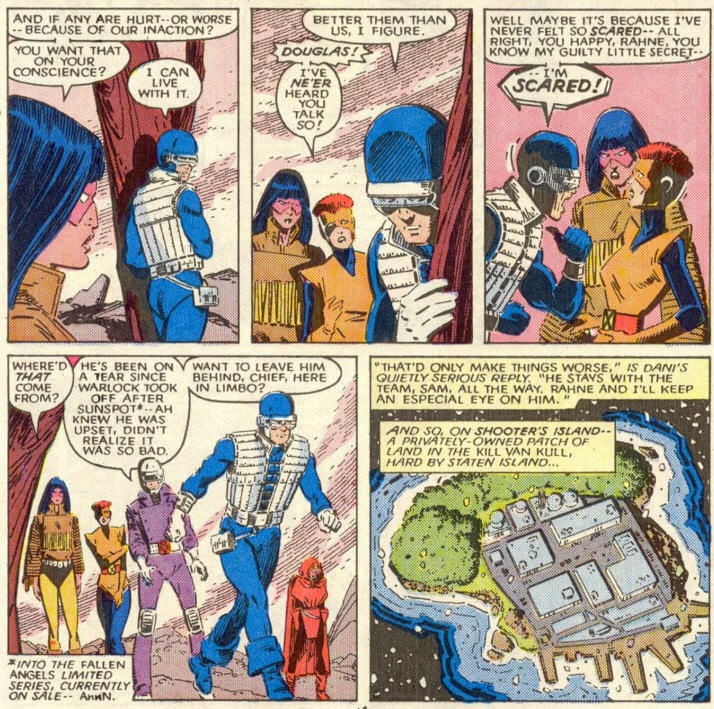 Amara is a bit more bloodthirsty in this issue, arguing in favor of killing the goons the New Mutants are fighting. 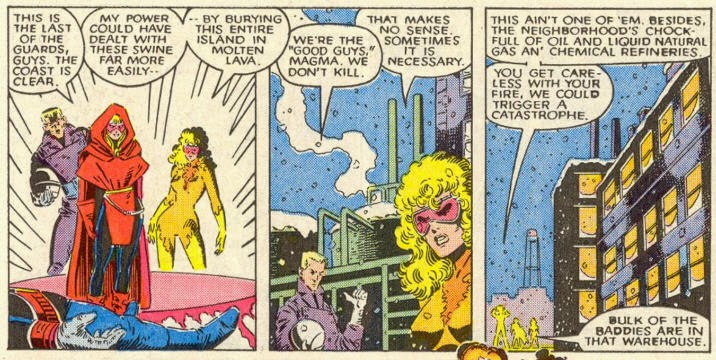 Though Proudstar correctly assumed the New Mutants would use Illyana to spy on the Hellions, thus enabling him to plant false information, it's not entirely clear how he knew exactly when the New Mutants, watching from time-wonky Limbo, would stop and start listening in on the Hellions. Did they just repeat the dialogue the New Mutants overheard over and over again for a few hours, just to be safe?

Doug gets mad at Sam for refusing to go after Karma, comparing it to what he said when Roberto and Warlock left, perhaps an effort on Claremont's part to smooth over some of the dodgier characterization in the first issue of that series by at least acknowledging it as such. 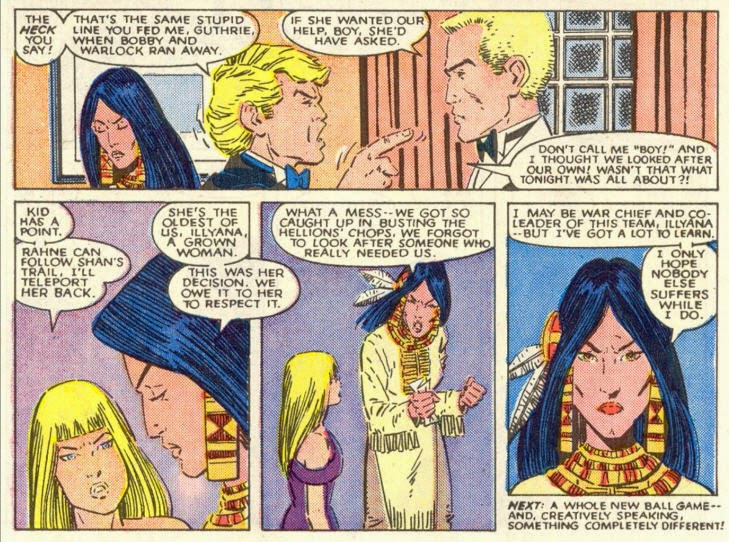 Young Love
As the issue ends, Proudstar and Dani flirt up a storm. 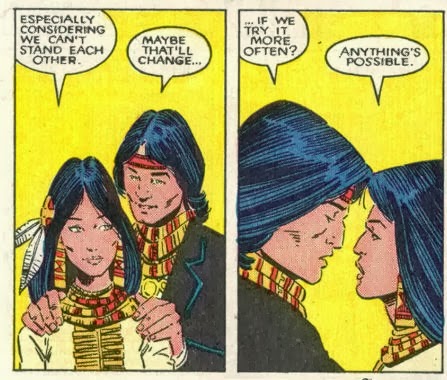 Teebore's Take
And with that, Chris Claremont's series-creating run on New Mutants comes to an end, with neither a bang nor a whimper. Instead, he goes out on the conclusion of a relatively low-key two-parter, one which, like the best story arcs of his run, is more concerned with characterization and character interplay than typical superheroics. Indeed, the obligatory action scenes in this one, in which the New Mutants take out some hired goons, feels more obligatory than ever, while the villains of the story (such as they are) get captured, off panel, by the main characters' chief rivals.

The focus, instead, is on smaller character moments: Karma deciding to put all her energy into locating her lost siblings, Doug dealing with his drunken shenanigans last issue and his role on the team sans Warlock, Amara's growing bloodthirstiness, etc. It may not be the flashiest or most definitive ending to a run: Claremont neither blows everything up on his way out the door nor ends things with a final declaration of the themes of the series (most likely because he intended, at the time, to return). Heck, the New Mutants don't even win the day in Claremont's final issue. Nevertheless, it is a satisfying conclusion to a run that saw the beginning and creative high points of the series.

Next Issue
Tomorrow, Scott and Jean have it out in X-Factor #18 and next week, Kitty Pryde gets some medical attention in Fantastic Four vs. the X-Men #1-4.
Newer Post Older Post Home
Posted by Austin Gorton at 12:00 PM